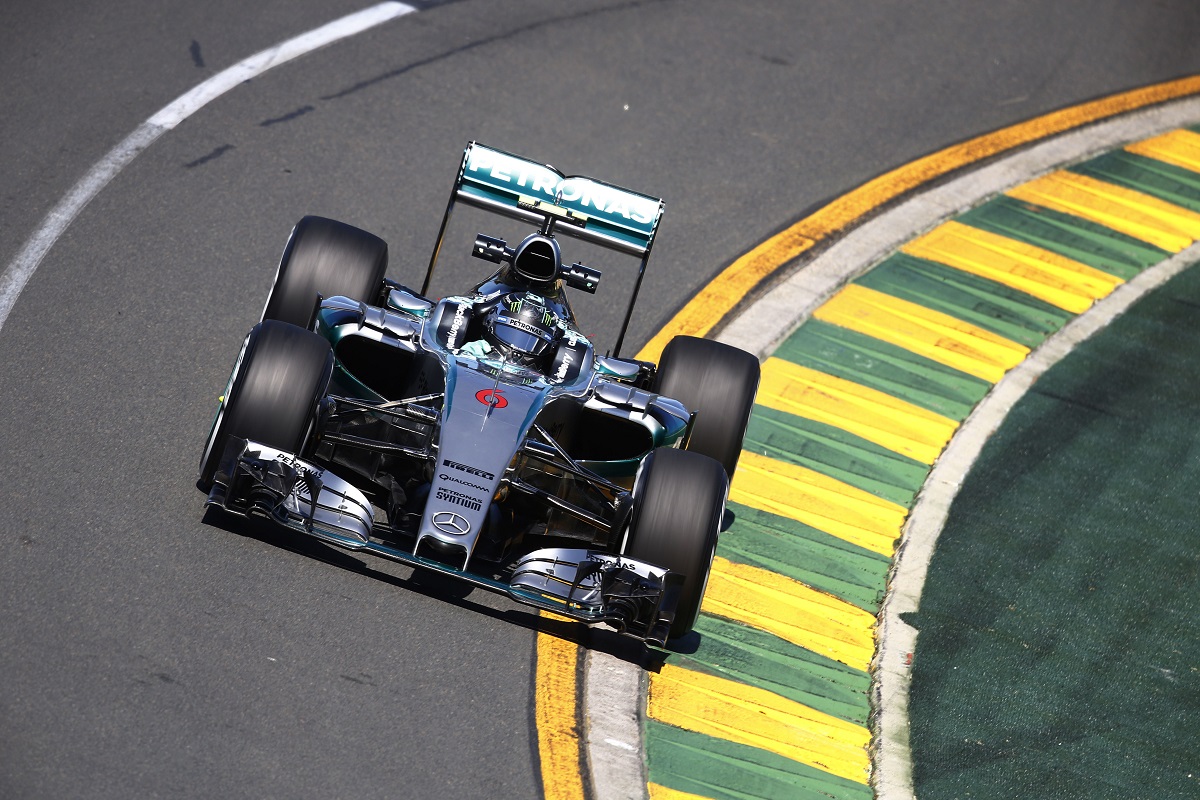 After a very dramatic off track start to the season during both Free Practice the 2015 Formula One World Championship was kicked off with Nico Rosberg drawing first blood in the Mercedes team by taking top honours in both FP1 and FP2.

FP1 saw Rosberg set a fastest lap of 1:29.557, only 0.029s ahead of teammate and defending champion Lewis Hamilton, so the 2 silver arrows drivers already looking to have a close season.

The fairytale story of Manor GP seemed to have hit a wall as they didn't run in either Practice sessions due to software issues with their 2014 Ferrari engine and modified 2014 car.

Sauber, arguably the new bottom end team of the season didn't seen any running at all in FP1 amid the legal dispute with Giedo van der Garde, however did run in FP2 with Marcus Ericsson being hampered with suspension damage limiting his running so far in Melbourne.

Due to the problems of the bottom 2 teams currently in F1, it looks like McLaren could be starting on the back row of the potential 16 car grid on Sunday as their Honda power unit issues continue to persist. The team only completed 13 laps in FP1. Kevin Magnussen went off in FP2 at Turn 6, hitting the barriers to which he said the car “took him by surprise”, later tweeting the incident was his fault after looking at the cars data.

Talking of surprises, Ferrari seem to have made the biggest improvement out of all teams claiming best of the rest in FP2. Sebastian Vettel was 3rd fastest and 0.715s faster than new teammate Kimi Raikkonen who was 4th fastest, however the Finn seemed to have a lot of negative feedback over the radio towards the end of FP2.

Lotus were 8th with Maldonado and 9th with Grosjean in FP2 however Grosjean didn't have much running in the opening session and both drivers had multiple offs during the 2nd Practice session.

Torro Rosso seemed to have very encouraging pace in FP1 going 4th and 6th fastest, Carlos Sainz Jnr going ahead of the most talked about rookie in recent history the 17 year old Max Verstappen. FP2 saw Sainz 7th and Verstappen having very limited running due to a battery problem restricting him to just 6 laps and 14th in fastest lap times at the end of the session.

Williams started with Bottas 3rd in FP1 1.2 seconds off the leading Mercedes, with veteran Feliple Massa 0.4s off Bottas in 7th. Williams luck seemed to change in FP2 as Massa was unable to run due a water leak and Bottas only posting lap time to go 5th fastest behind the 2 on form Ferraris.

Red Bull performed had a similar start to the weekend as Williams with Daniel Ricciardo out of FP2 due to an engine change, meanwhile Daniil Kyat went 6th fastest only 0.8s behind 5th placed Bottas, which has to be is impressive for the youngsters first top team outing.

Force India have emerged as one of the struggling midfield teams after only attending one test with their 2015 challenger Nico Hulkenberg and Sergio Perez are still playing catch up on the rest of the midfield due to lack of testing resulting P13 and P12 in FP1 in P10 and P12 in FP2 respectively.