DIY push/pull rally shifter, sculpted paddle modeled after 2000cc Subaru from Dirt Rally 2.0. Combination of metal fab and printed parts. Working on other paddles as well as the arm/knob arrangement from Peugot R5/R2 but I've been racing 2000cc in JRC so that was prioritized.

Momo Mod 78 rim matches at least 50% of the cars in Dirt Rally 2.0 and feels great in the hands. This one is 320mm and leather. Hundreds of hours on it with no gloves and still looks brand new. 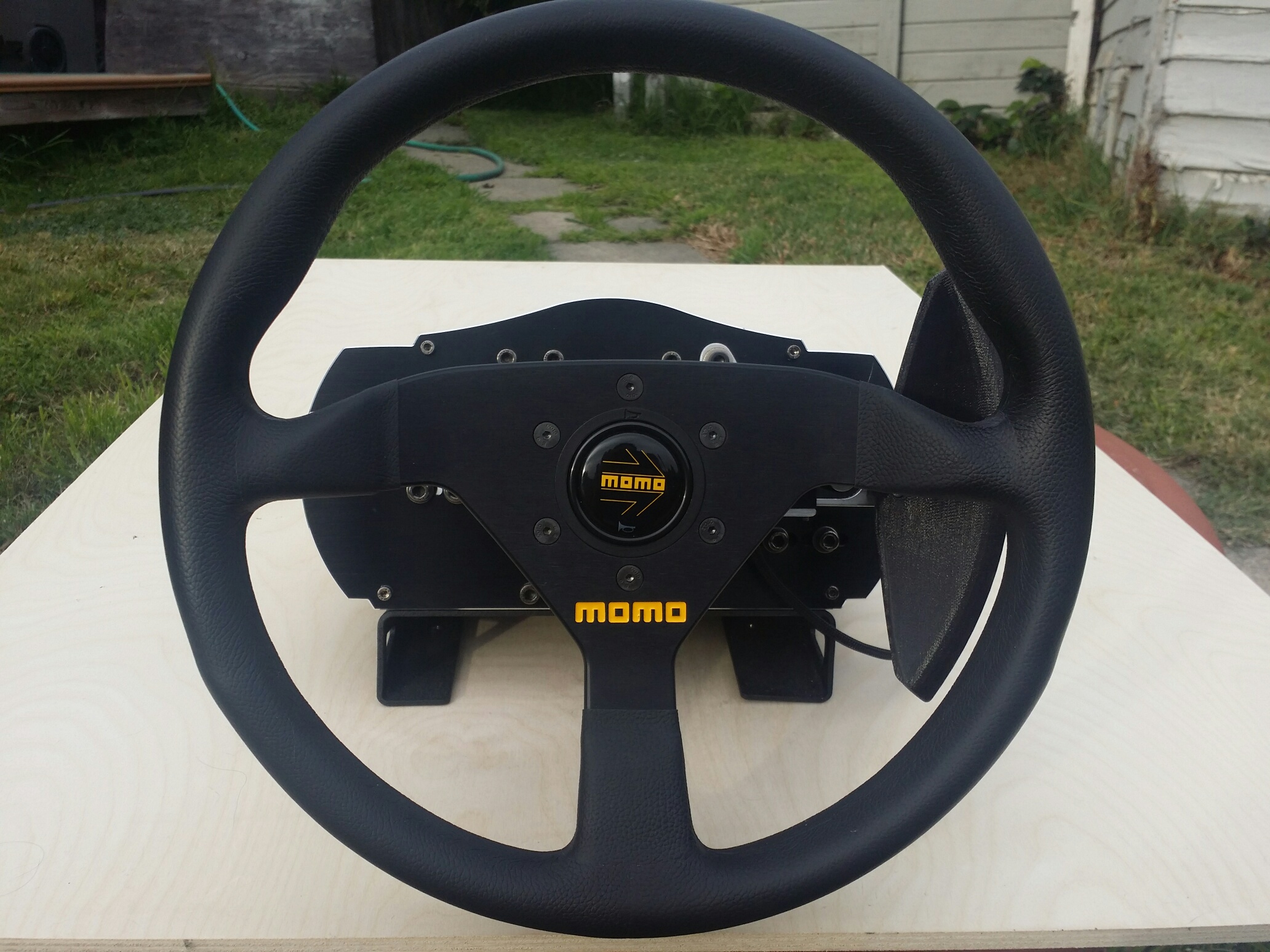 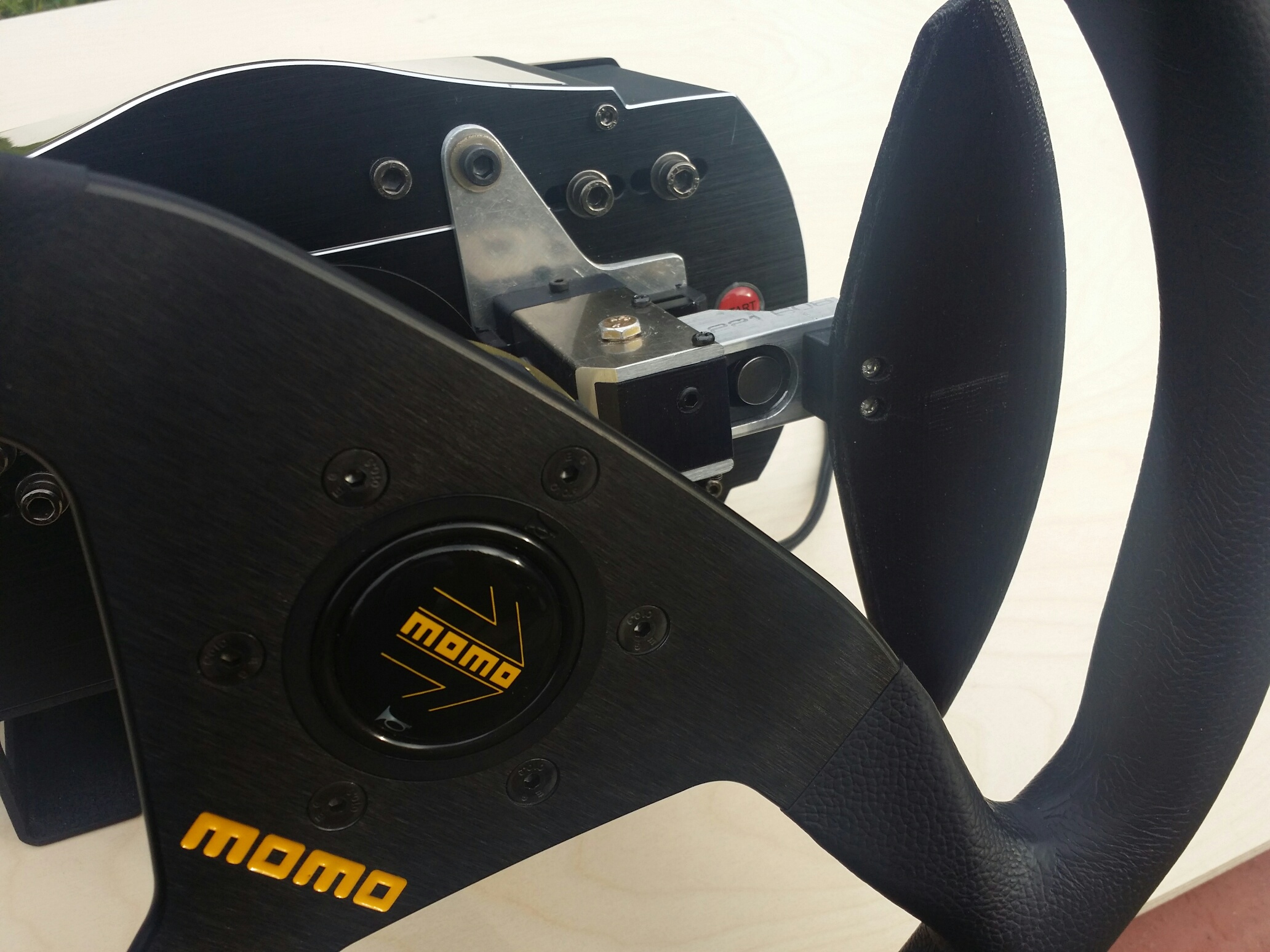 Baseplate mounted on face of CSW using the sacred cow screws Fanatec and some people are inexplicably weird about. Bolts used are 6mm longer so thread engagement is the same and they're torqued the same so. 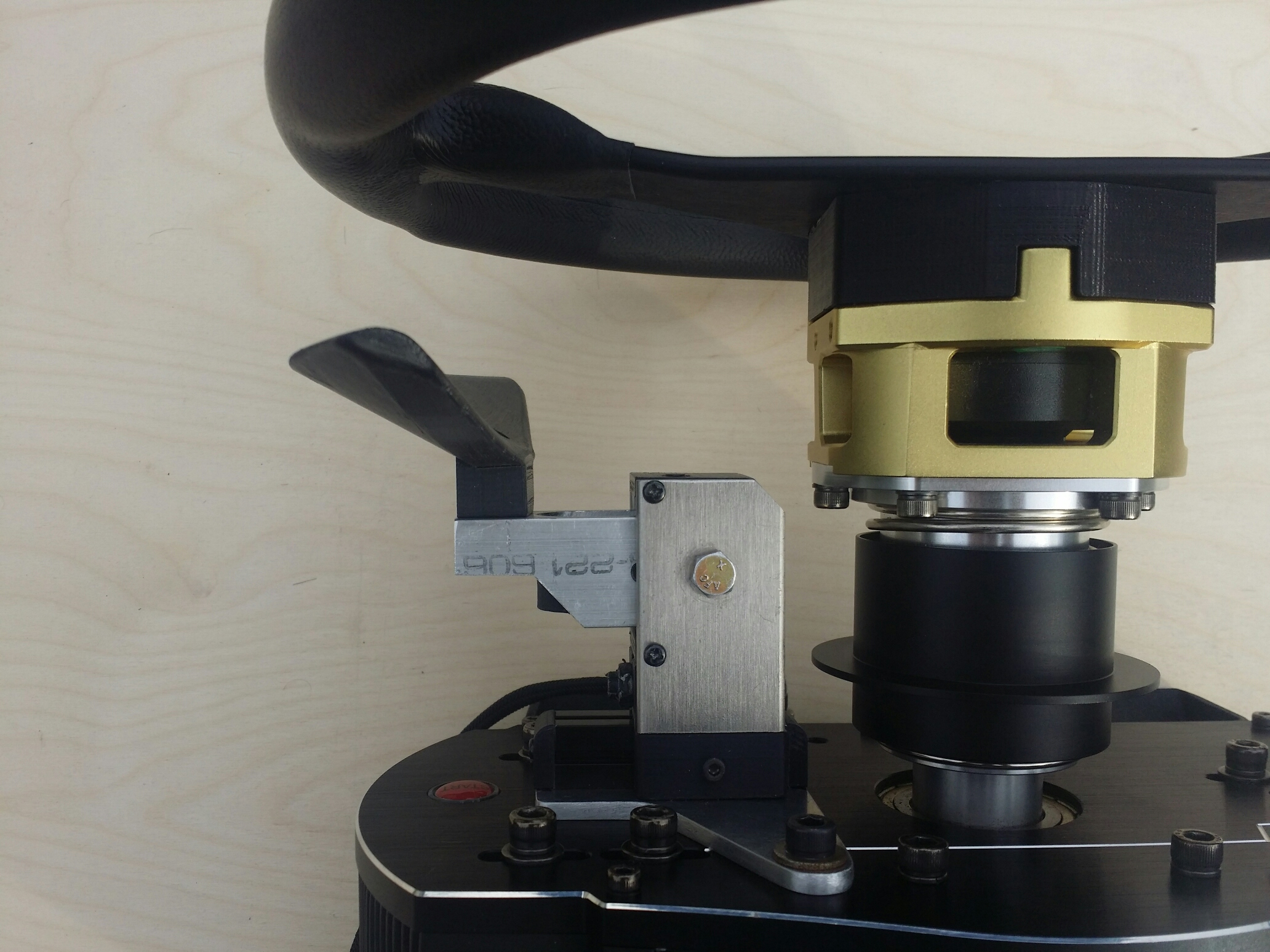 I also printed a 1/2" (12.7mm) spacer that interlocks on a Podium hub, needed more space and wanted to be able to use my horn button. Could be printed any length and is super solid because the mount screws go through the wheel into the hub with the spacer compressed between them. Making a new spacer soon that will have 10 small buttons and 2 axes since they're going to waste without any buttons on the rim. 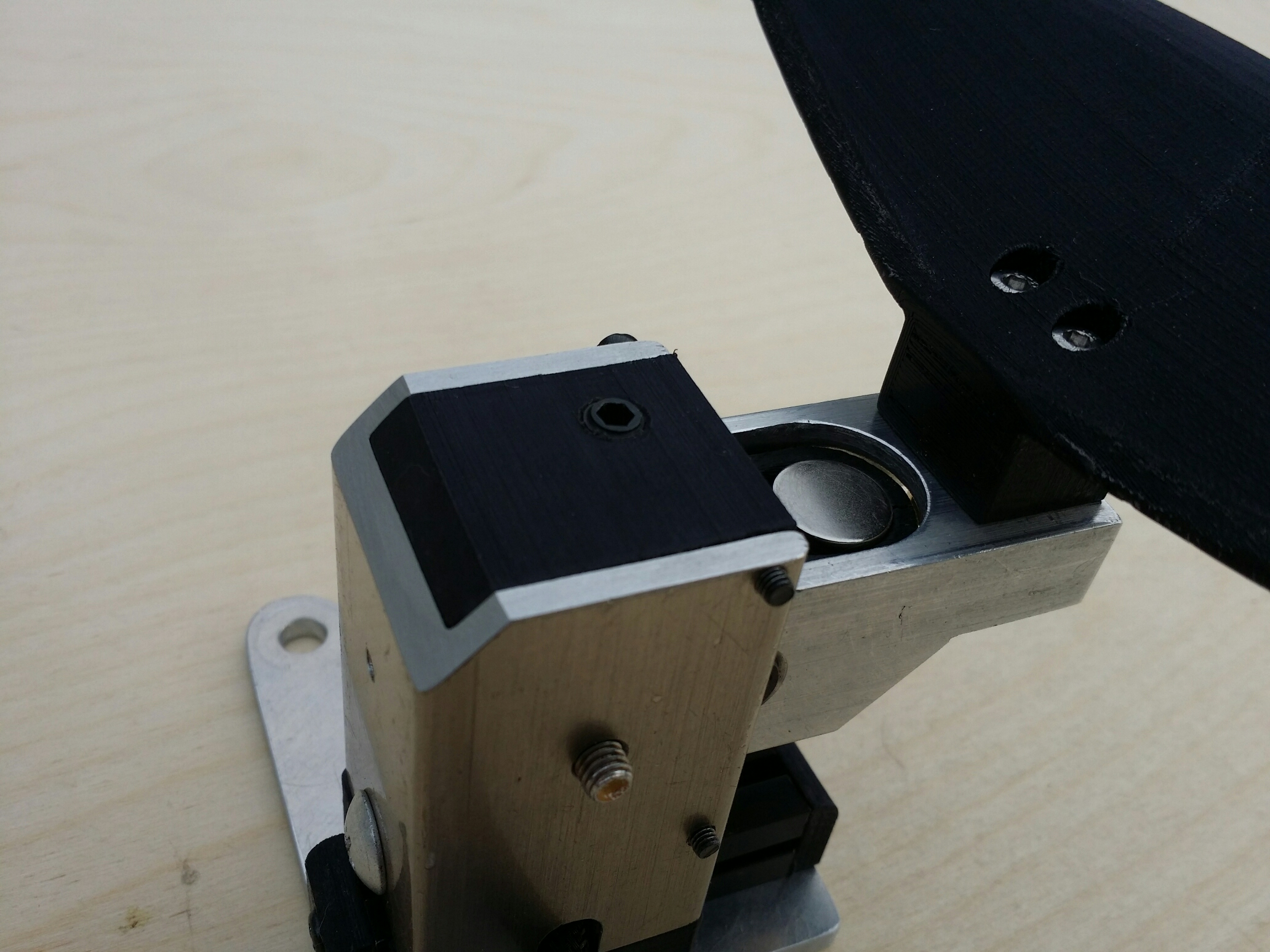 Magnets are 1/2"x1/8" N52 Neodymium, rated at 7.5-8lbs ea. Mechanism has 6 in it for this paddle. Longer extensions will require more magnets to maintain crisp kinematics but at this length 6 feels really nice. 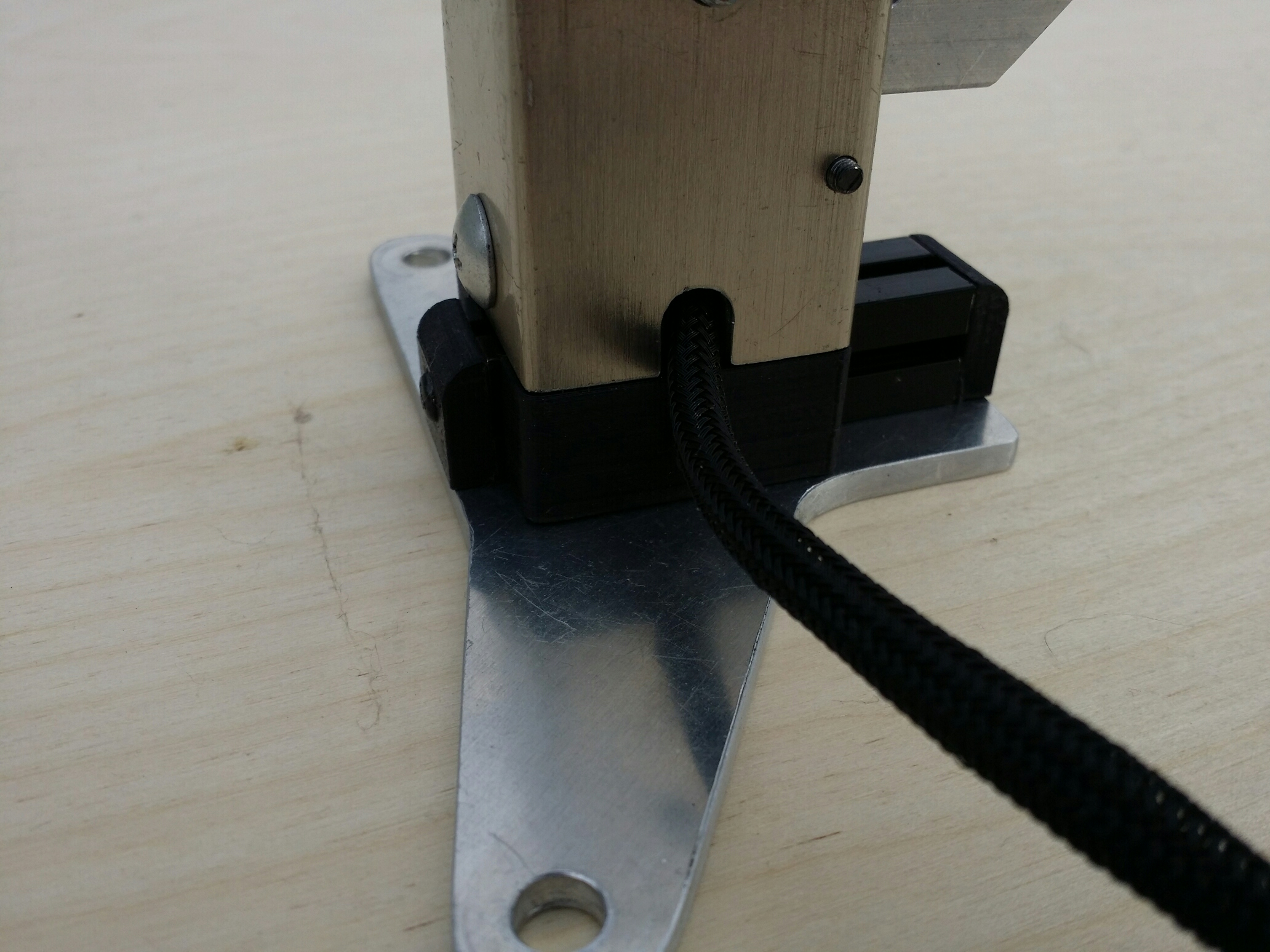 Wire harness sheathed with nylon mesh and heavy duty shrink tubing at the ends. Shifter mounts to base on a 15mm t-slot rail (MakerBeam XL) and has 30mm of side to side adjustment. I have different length versions in 10mm increments of the printed interface between t slot and stem, to adjust projection when needed. 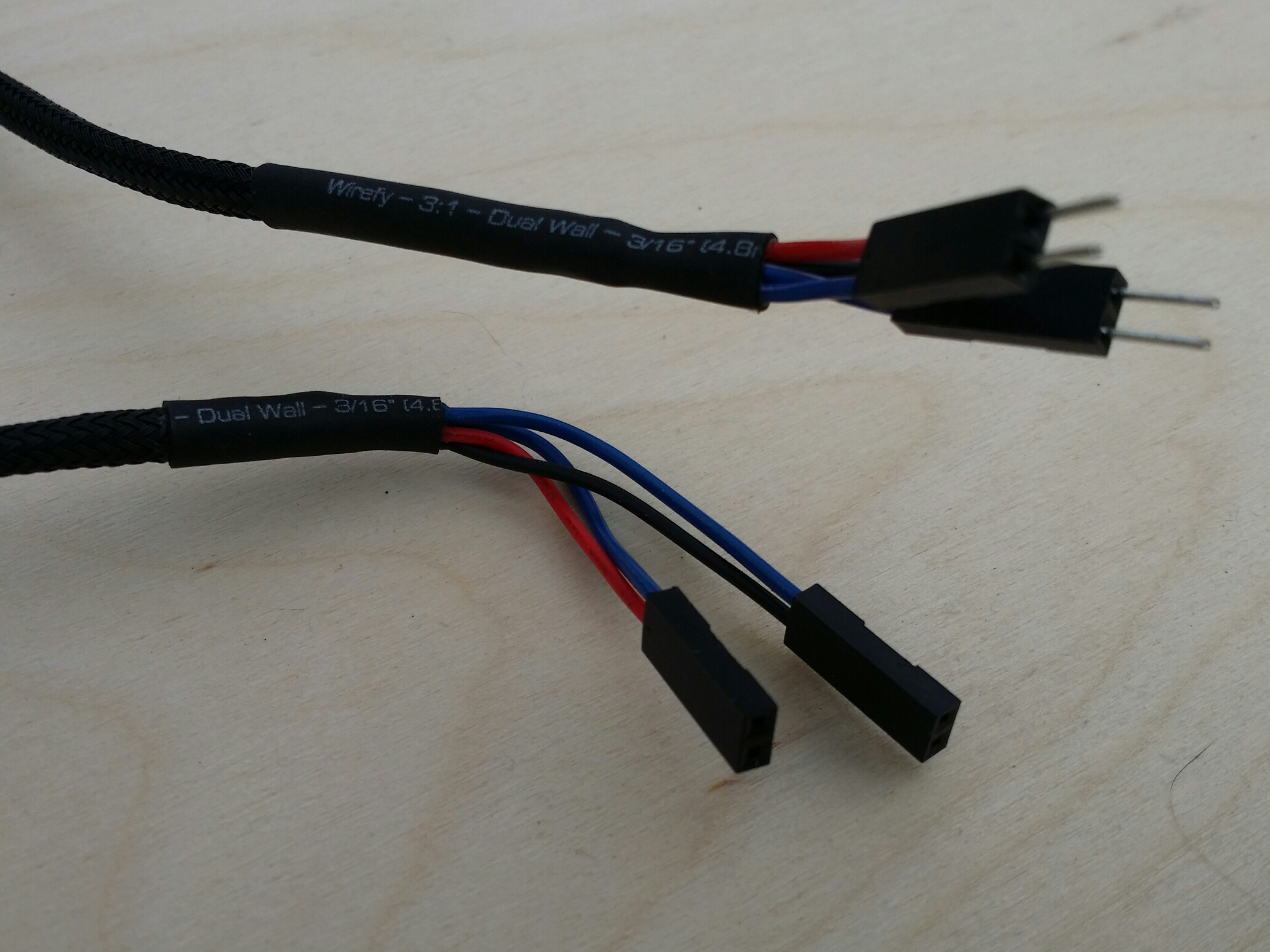 Wired mine the same way Ascher did theirs, makes swapping with other devices or modding this one super easy with the breakaway and also easy to adapt to other bases. 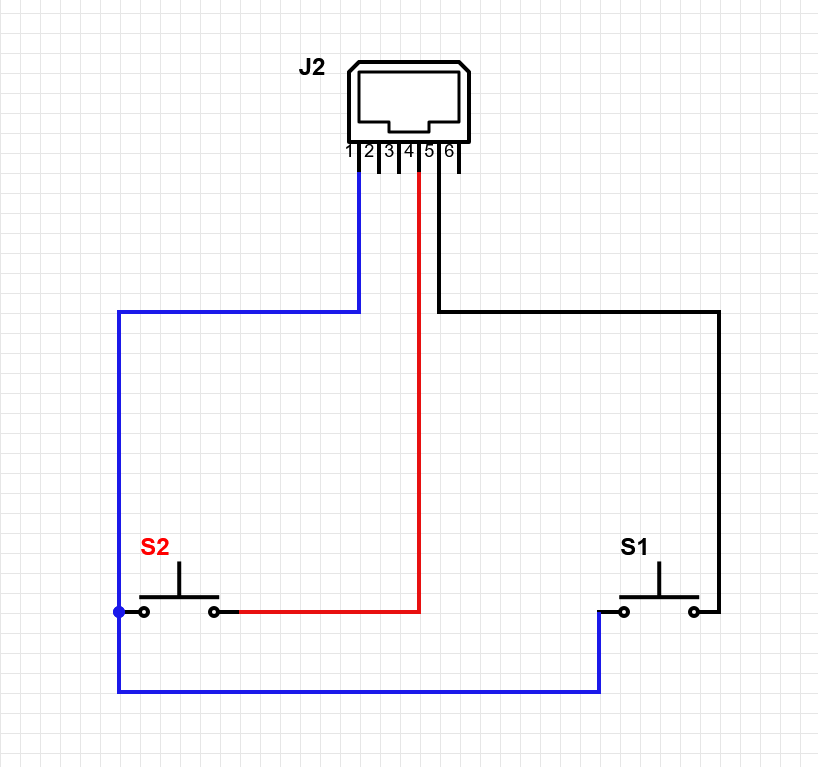 Schematic for wiring paddles to a Fanatec wheelbase in Shifter2 port. Blue/1 is ground, red/4 is push and black/5 is pull. I'll have a breakaway connector in the middle of the cable so the shifter can be easily removed/installed where the stem meets the base. 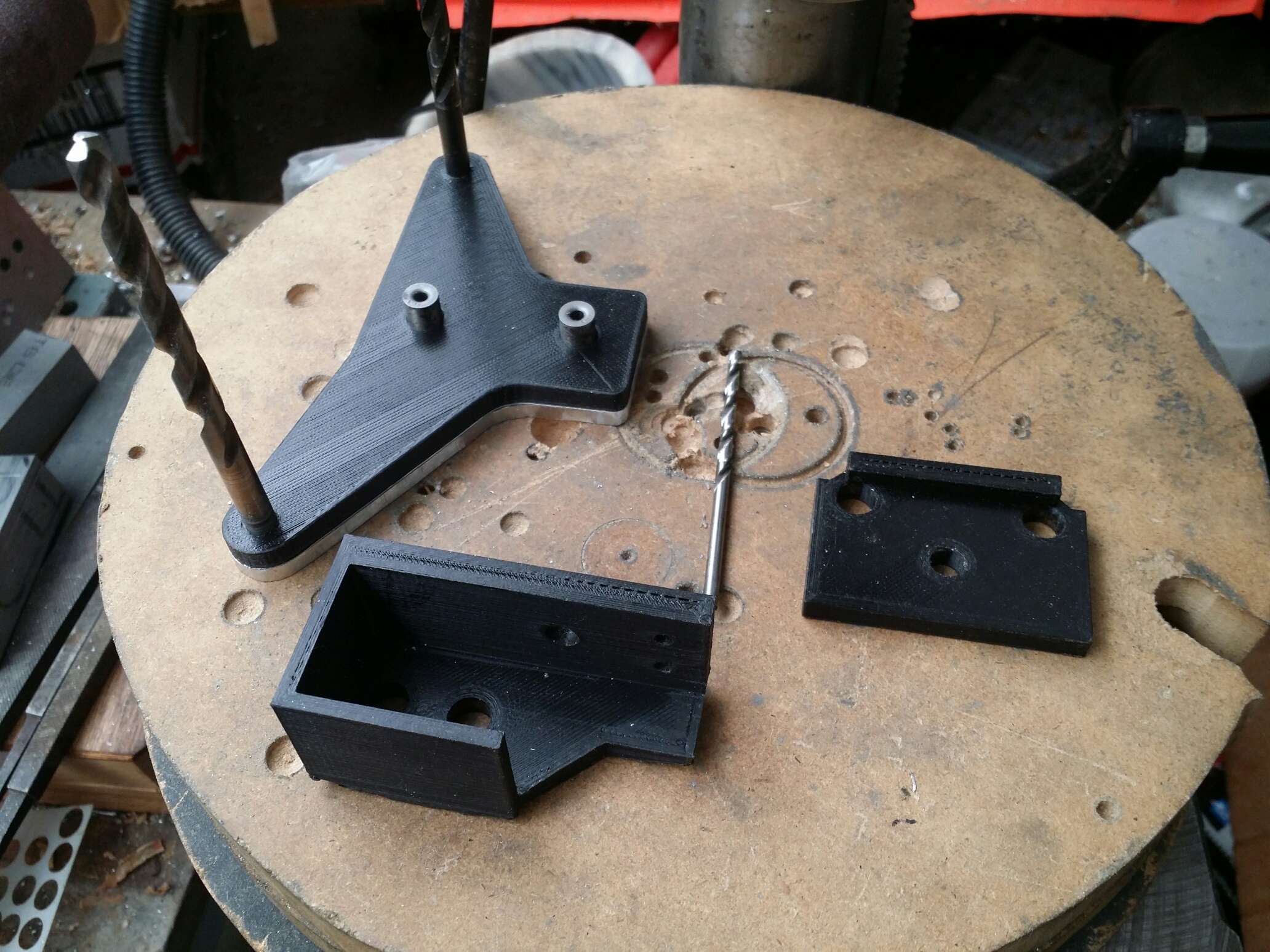 Some of the drill jigs I printed since I don't have a mill to control precise center to center tolerance plus this makes it easy to make more. The holes are printed oversize to hold hardened drill bushings. They're expensive so the jigs share the few bushings I have. 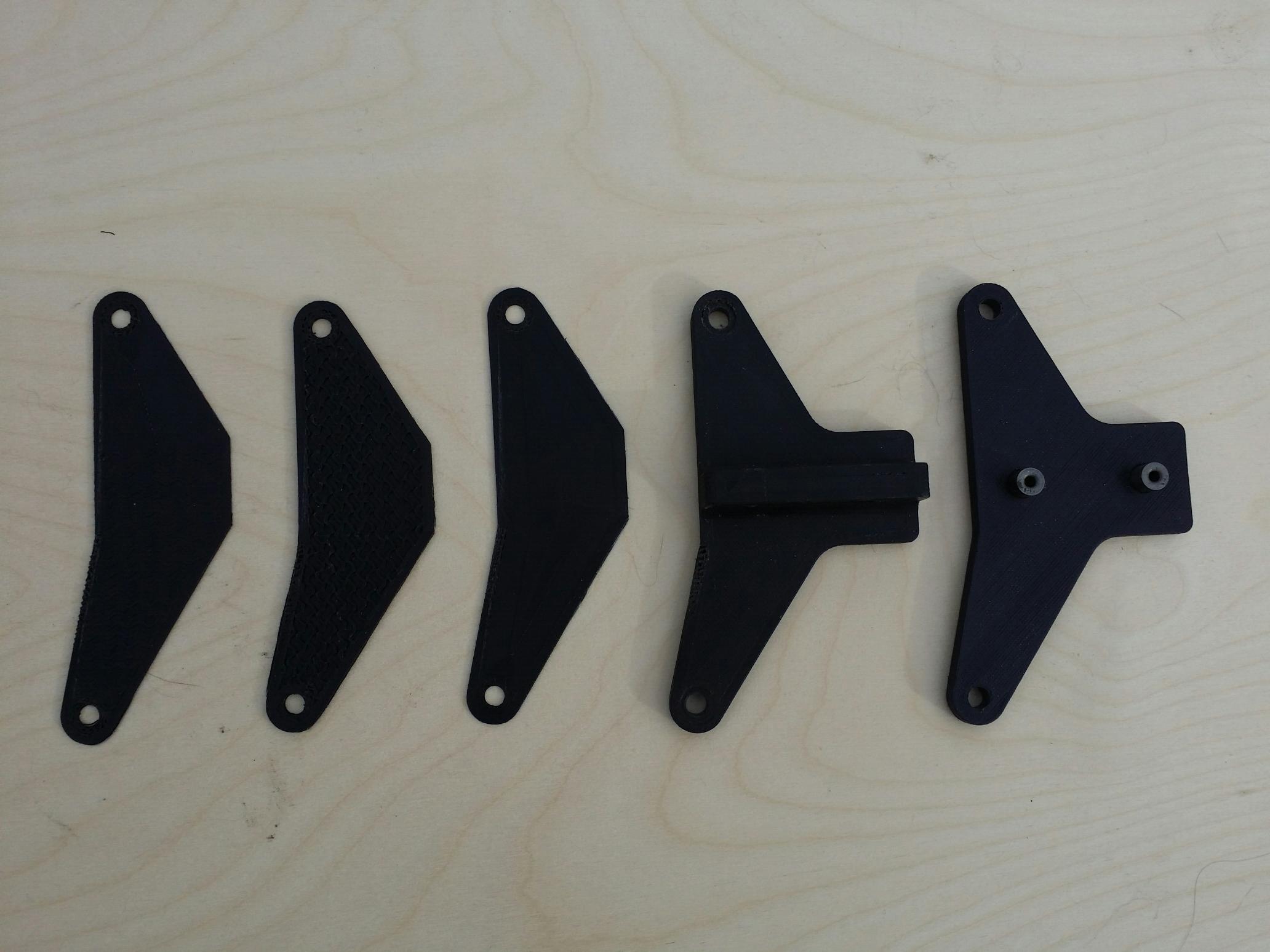 Couldn't find the stated dimensions for the center to center of the bolts I wanted to use even after posting here so made some measurements and guesses then used cheapo printed partials as verification coupons till I had the right spacing. 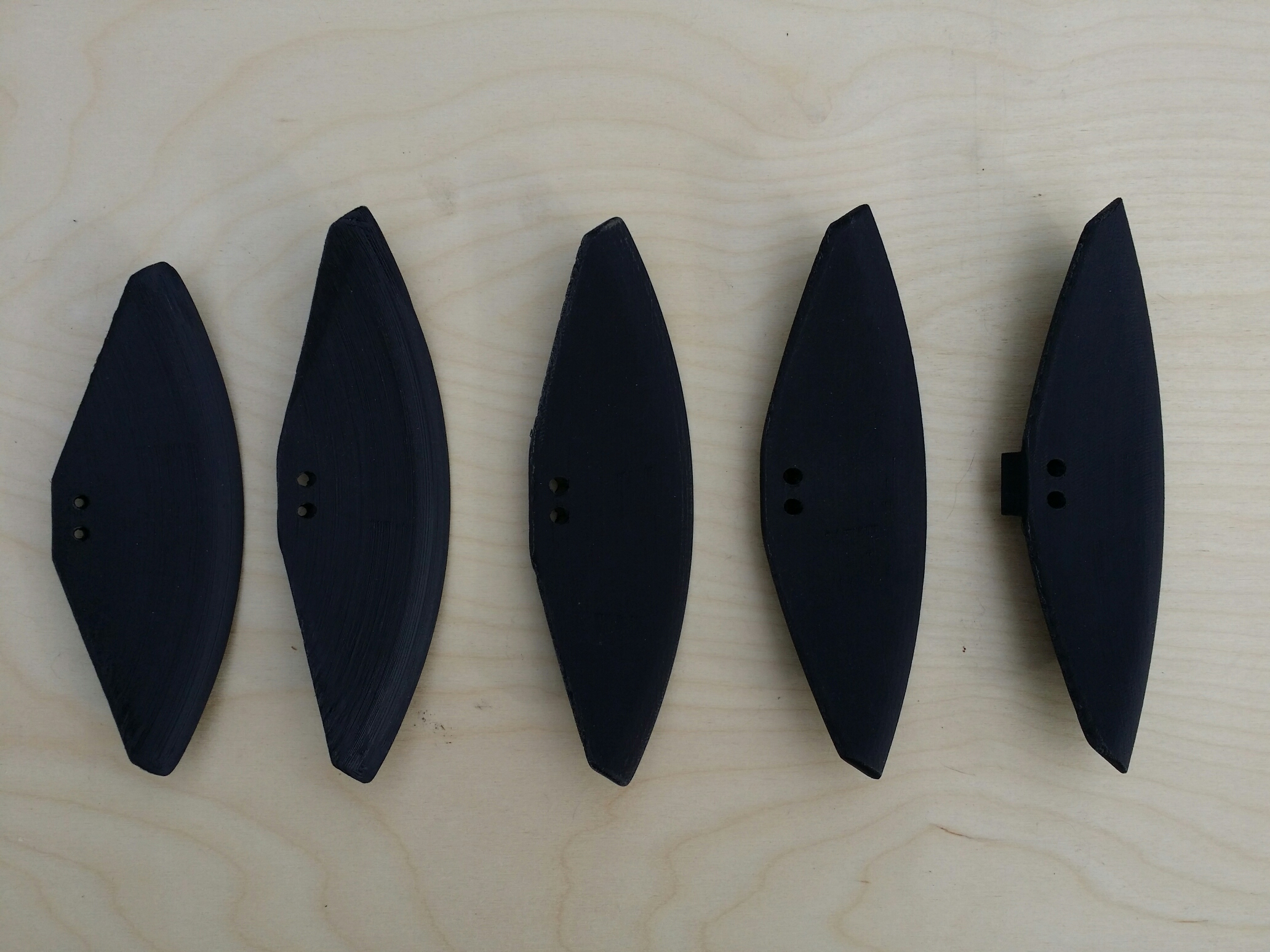 Evolution of my take on the sculpted paddle from 2000cc Subaru rally cars. Don't know what it's called and have no pics of it so stare at it in VR then model it from memory, print and start the process over. Eventually I landed close enough to move on. It's super ergonomic though with that angle and dish


...it's a wip and I'll be posting updates on it here as I finish more configurations for it.
Last edited: Mar 4, 2021
Sort by date Sort by votes
N

Nice! (But that corner in the final picture - far right - looks sharp. You don't want to bleed all over your nice shifter )
What did you use for the switch?
Upvote 0 Downvote

Thanks! Yeah that paddle is a bit sharp especially in the pic. The tips of it are something I've struggled with modeling, bumping into Solidworks (2014) weirdness with intersecting fillets and chamfers and compound curves but I'm already modeling a newer version lol. It's close enough to file/sand it into submission though if I lose the pixel fight

Pic that better shows the tips.. still a bit pointy but not as bad as I thought it would be in use. 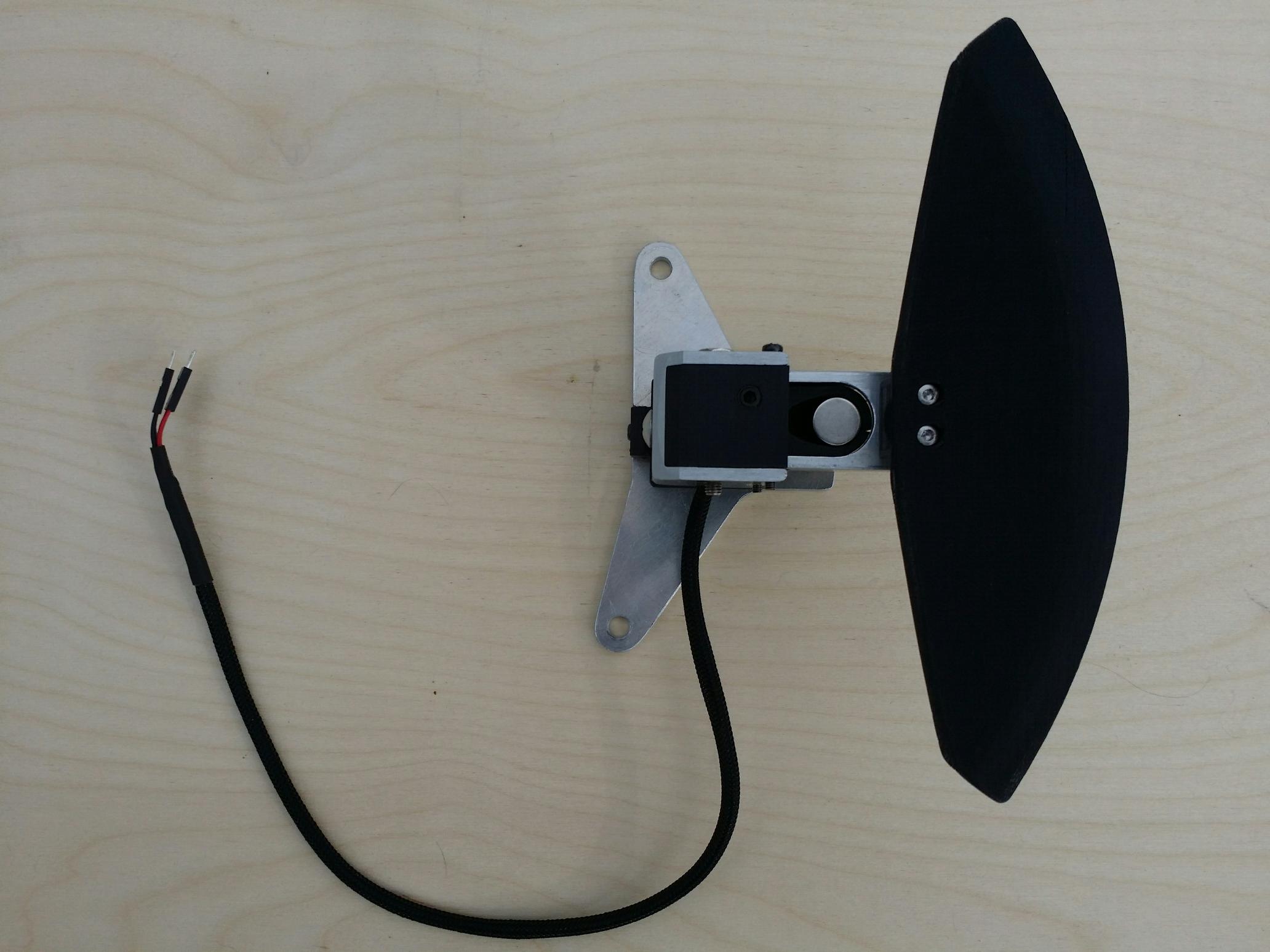 As to the switch it's one of my favorite tacts, made by C&K, KSC461JST2LFS, the one on the right. It's a small tact with 6N actuating force and a nice click to it. Took a few tries to find the right depth to sink it for proper actuation but its flexible plunger and small size it works quite well. Only available in SMD though so a bit more of a pain to solder. I had these on hand from other projects, using them to stock 4/5-way switches people normally use mushy 6x6x4.3 tacts for. 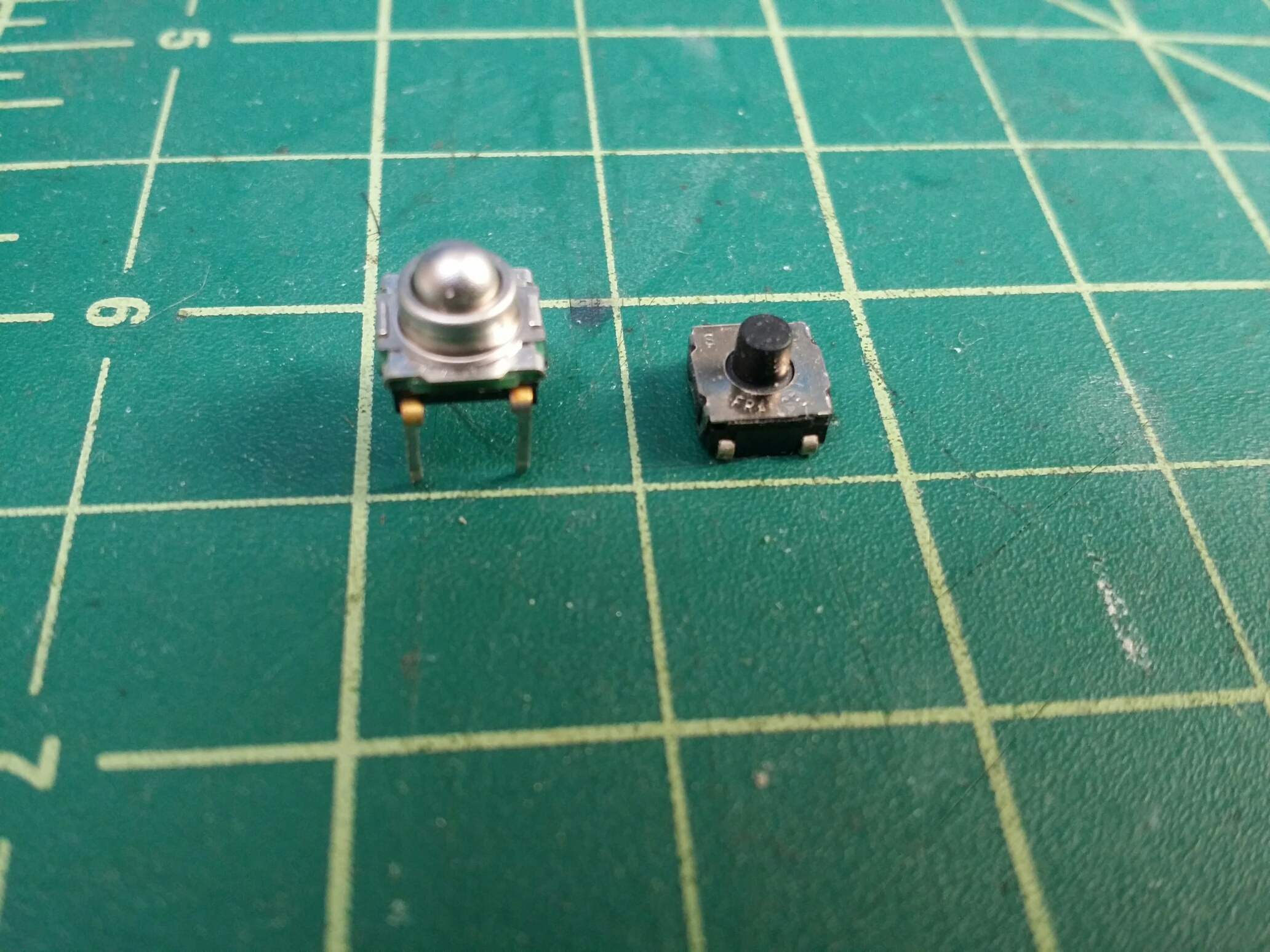 Might make another version with the metal dome switch on the left, another C&K, KSJ0M43180SHLFT. It's not as high of actuation force but the magnets are really what provides the kinematics. This is a much louder and sharper click though not sure if that's good or not till I make one but it's metal dome plunger make it a good fit for bump-stop actuation. A bit bigger, but already modeled a new housing to accommodate plus it's got legs to making soldering easier. 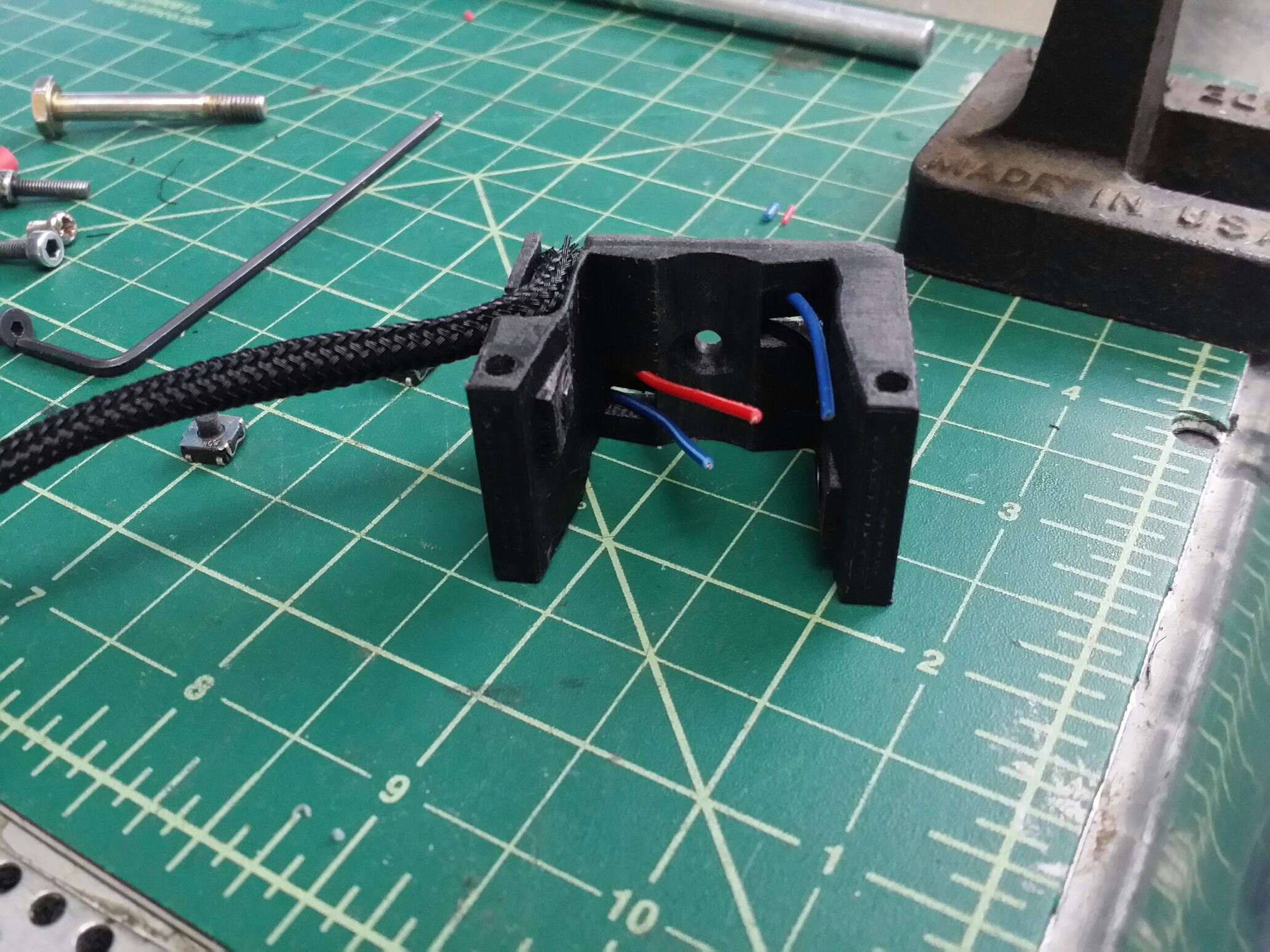 A peek under the hood. Main housing holds switches/manages wires/strain relief, forms the mechanism's travel stops as well as the push/pull arm stops. You can see the tiny switch sitting to the left, which fit in the square recesses visible if you look at the full size pic. 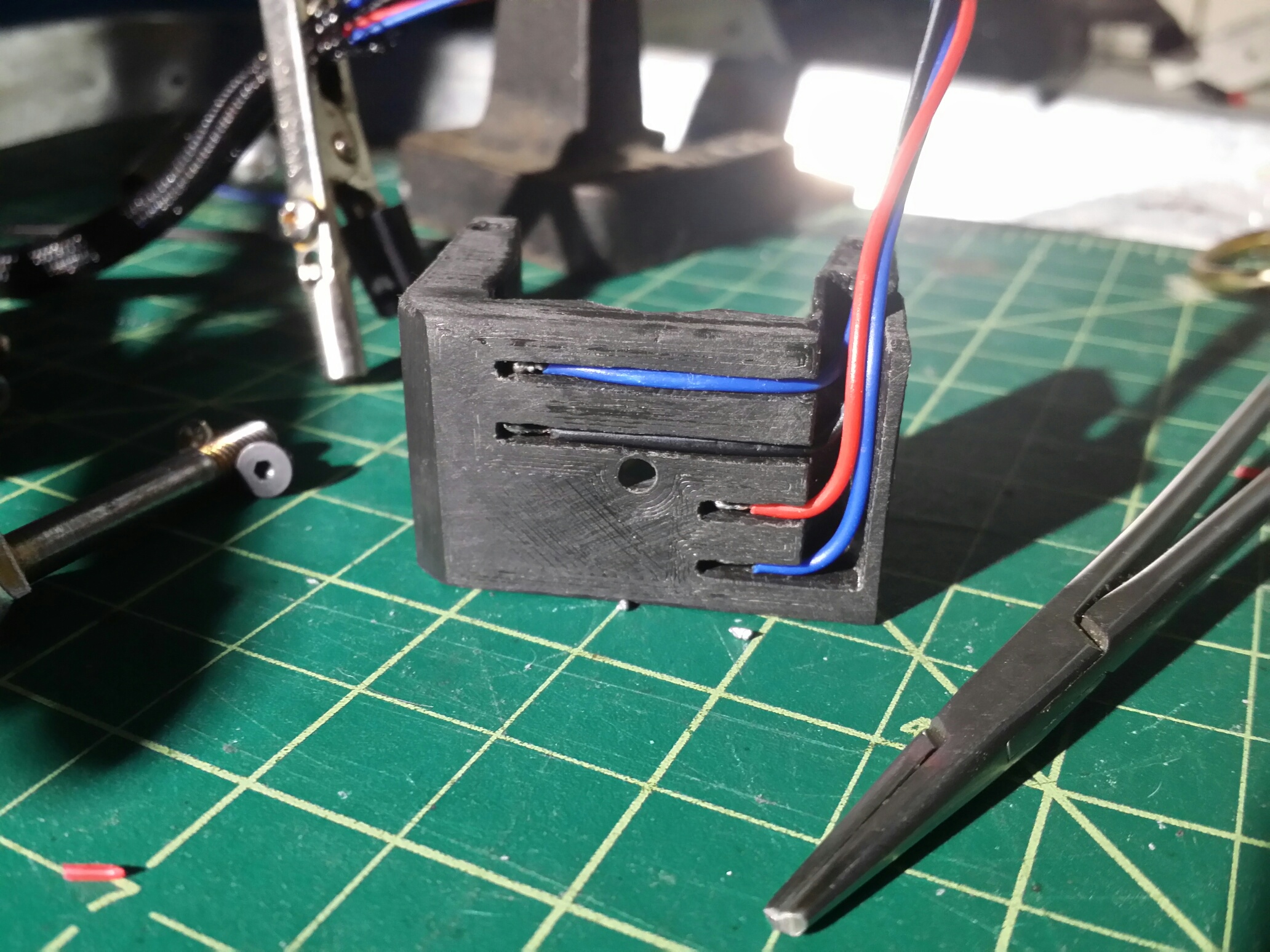 Soldered up and ready to install. Being able to model/print really helps with wire management for things like this.

mechsicko said:
Should make a proper BOM. To that end magnets are 1/2"x1/8" N52, ~7.5lbs each and I'm using 6 with this paddle it feels glorious. It was initially made with 12mmx3mm N40 magnets I had laying around but N52 are noticeably stronger.
Click to expand...

very stupid question, but the magnets are arranged so that they work against each other? So the paddle is figuratively "hovering" between both stationary magnets and while actuating them you are acting a force against the magnets?

I haven't used a wheel like that yet, and the Toyota MMT paddels still waiting for their installation onto my rig have springs inside them
Upvote 0 Downvote

AccAkut said:
very stupid question, but the magnets are arranged so that they work against each other? So the paddle is figuratively "hovering" between both stationary magnets and while actuating them you are acting a force against the magnets?

I haven't used a wheel like that yet, and the Toyota MMT paddels still waiting for their installation onto my rig have springs inside them
Click to expand...

Not a stupid question but the answer is the opposite. Magnets provide the centering that makes it snap back to the middle when you let go instead of a spring. Nowadays they're commonly used like this in sim shifters and even irl. It feels different that a spring in that once they break away the force is very low. That makes it quickly bump the switch during actuation where a spring increases tension with travel. Magnets feel really nice and I think reduce the likelihood of mis-shifts
Upvote 0 Downvote

mechsicko said:
Not a stupid question but the answer is the opposite. Magnets provide the centering that makes it snap back to the middle when you let go instead of a spring.
Click to expand...

ah no, this is how I understood it

Looks a like a very solid build, which raises the question how we all think we should operate a push/pull shifter?

Do you plan on hitting the paddle hard on up and downshifts?

I just finished a lighter build version of the push/pull shifter.

For me personally it's a replacement of magnetic shifters. Initially there were plans to reïnforce in a future build, so it can take a beating if necessary. But after extensive testing, i like it the way it is.


PS: Can we please see a video of your shifter in action ?
Upvote 0 Downvote

Looks a like a very solid build, which raises the question how we all think we should operate a push/pull shifter?

Do you plan on hitting the paddle hard on up and downshifts?

I just finished a lighter build version of the push/pull shifter.

For me personally it's a replacement of magnetic shifters. Initially there were plans to reïnforce in a future build, so it can take a beating if necessary. But after extensive testing, i like it the way it is.


PS: Can we please see a video of your shifter in action ?
Click to expand...

Thanks man, I've been admiring your work for a long time I appreciate the kind words and know an accomplished craftsman.

Not a replacement, just adding an option to be able to better match more kinematics of cars for VR.. it's magic when you have a setup that rhymes with what you're seeing. As such I use H pattern in cars with H, manual seq in those cars and have a set of shifter shaft extensions/replica knobs (Fana SQ, building new DIY one). Combined with a few different length handles for my handbrake I can mostly replicate the reaches/touches/kinematics of most cars I drive.

I mostly rally and a few of the cars in DR2.0 have push/pull shifters in them so I made this to accommodate those. I started the project a long time ago to make the Pugee setup which is a beefy arm/knob so that partly explains the overbuilt design. Subaru paddle got prioritized because I'm racing 2000cc in JRC and had immediate use for it. I also like things to feel solid/rigid which can also take abuse cause I might really mash it in a heated moment. The other reason is it was born out of playing around with scrap on hand... 1" aluminum square tube, cast alum Ikea shelf brackets, printer etc.

Was going to get a vid today but burned the hours of good lighting trying to finish my Pugee handle since my carbon tube I needed for it showed up, wanted to get pics of it at the same time. Now it's race thirty so I'll take pics/vid tomorrow
Upvote 0 Downvote

HoiHman said:
-snip-
PS: Can we please see a video of your shifter in action ?
Click to expand...

Made a short one showing it actuating from a few angles. My cockpit and space are way too messy atm to show it on the rig and lighting is easier when it's off as well.


Also got a few pics with the Puegot arm on it and had a chance to use it in a few stages last night. Waiting for bigger magnets to show up, the increased arm length is very noticeable and even with 20kg of magnet but the short paddle setup feels glorious already. 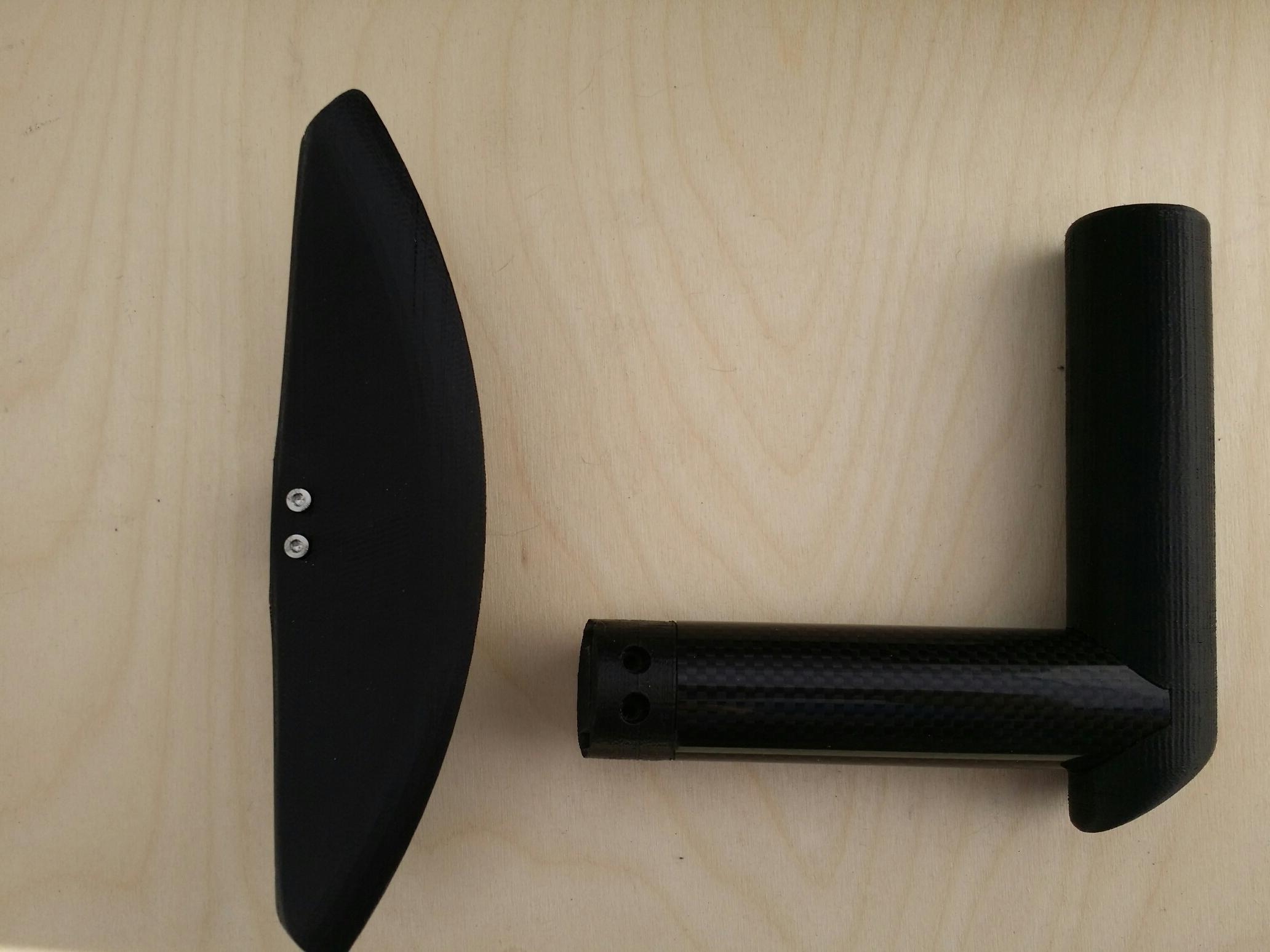 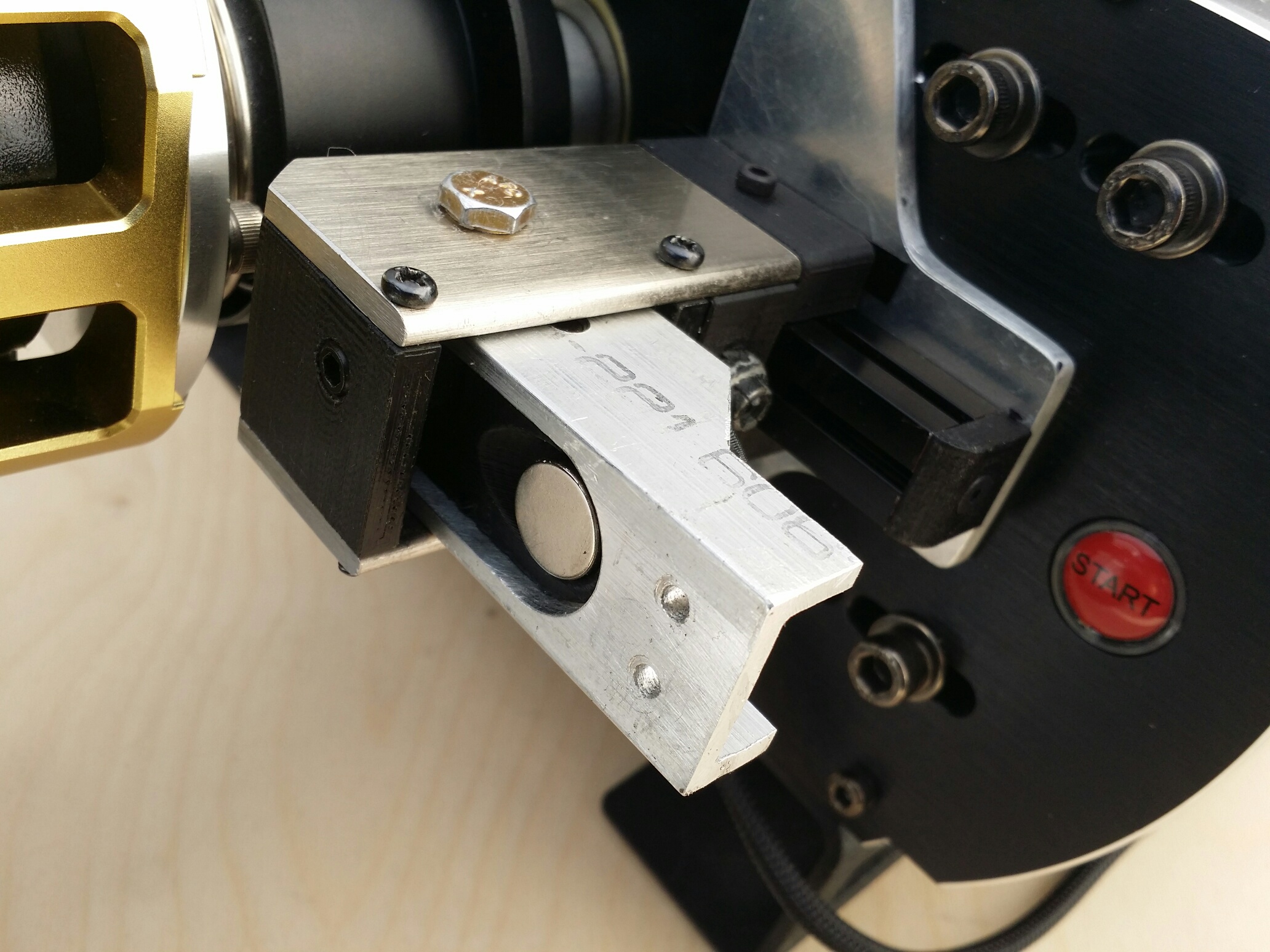 Closeup of the mechanism termination showing the standard M3/10mm spacing used. By using a squared shape I can use it to mount attachments at specific orientations and they will mechanically engage to stay put. 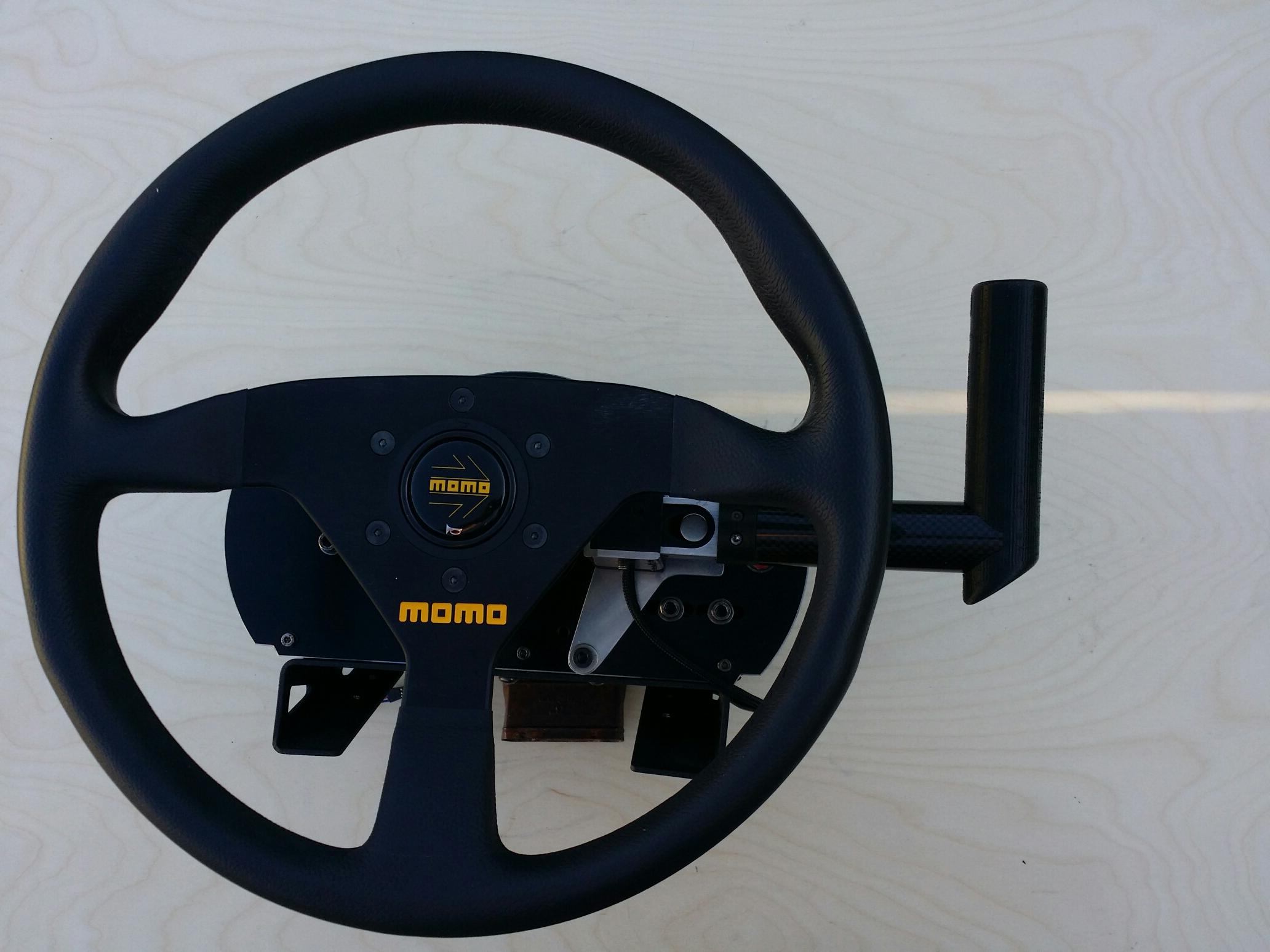 A familiar sight to anyone that's driven a Peugot R2 or R5 rally car irl or in DR2.0 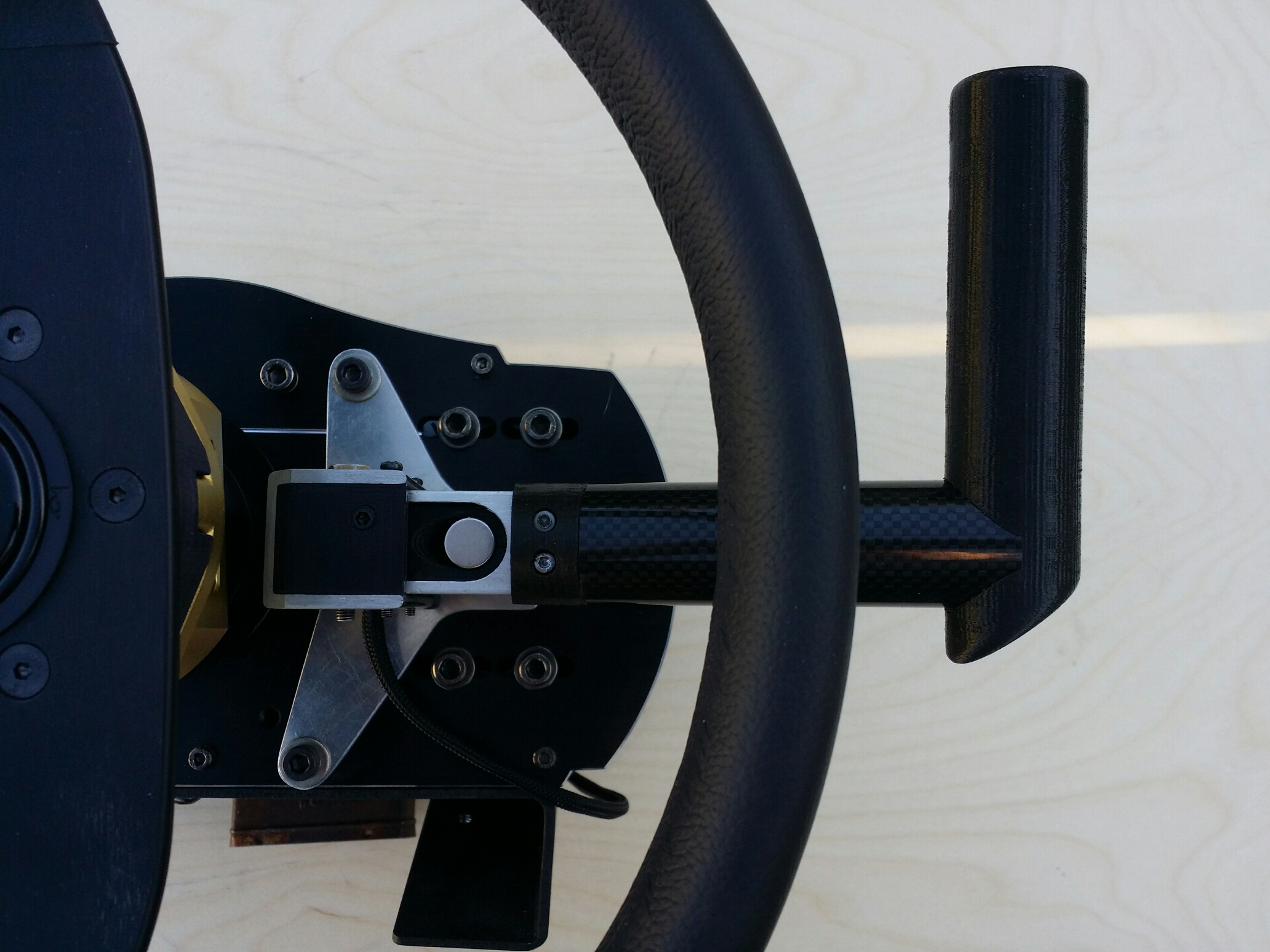 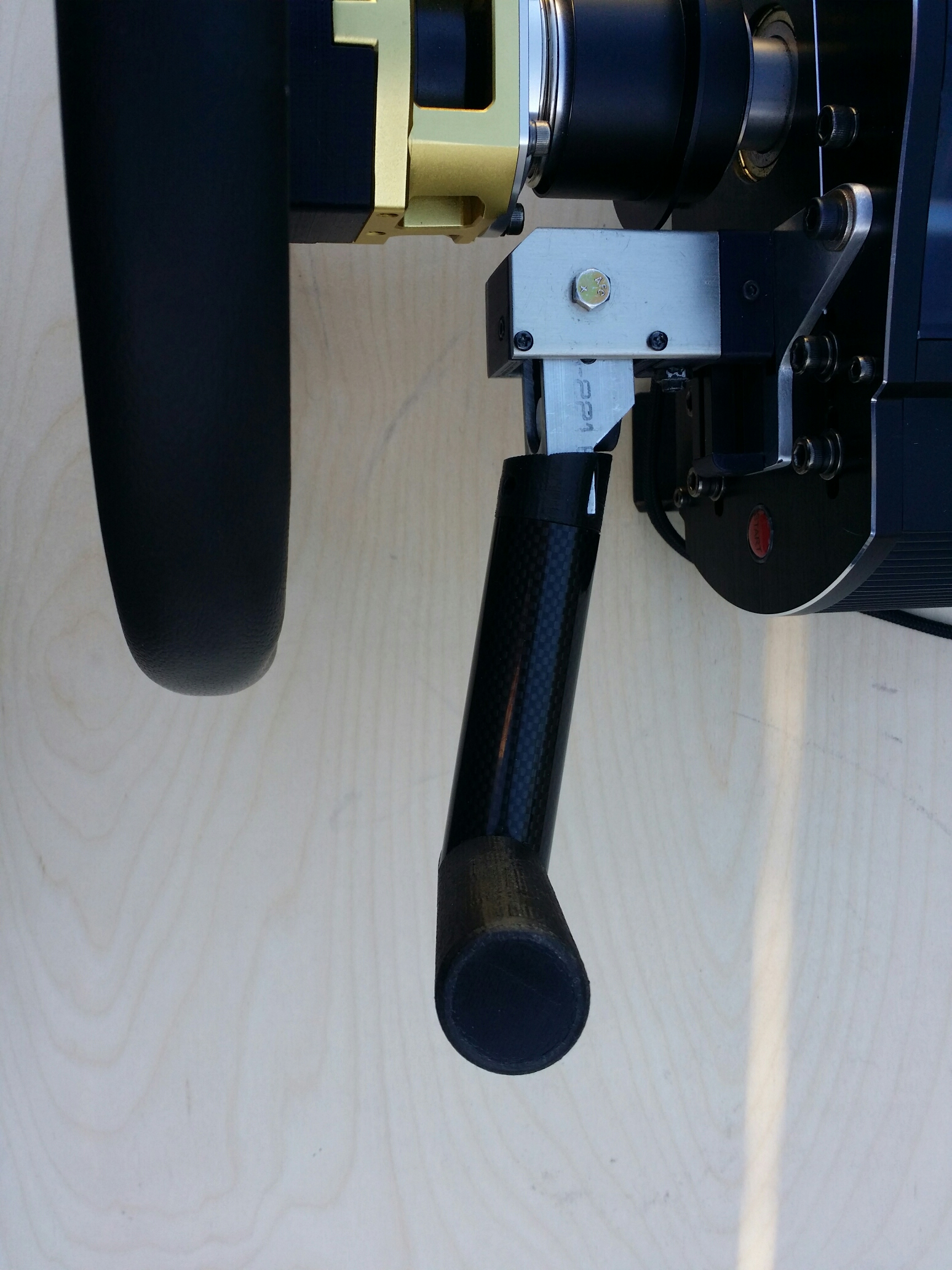 This iteration has 10deg forward rake but after playing with it in-game I realize the angle is a bit dramatic. I have base pieces printed at other angles and will make a new arm and then a stem base at the correct projection length to make it sit in the right place. 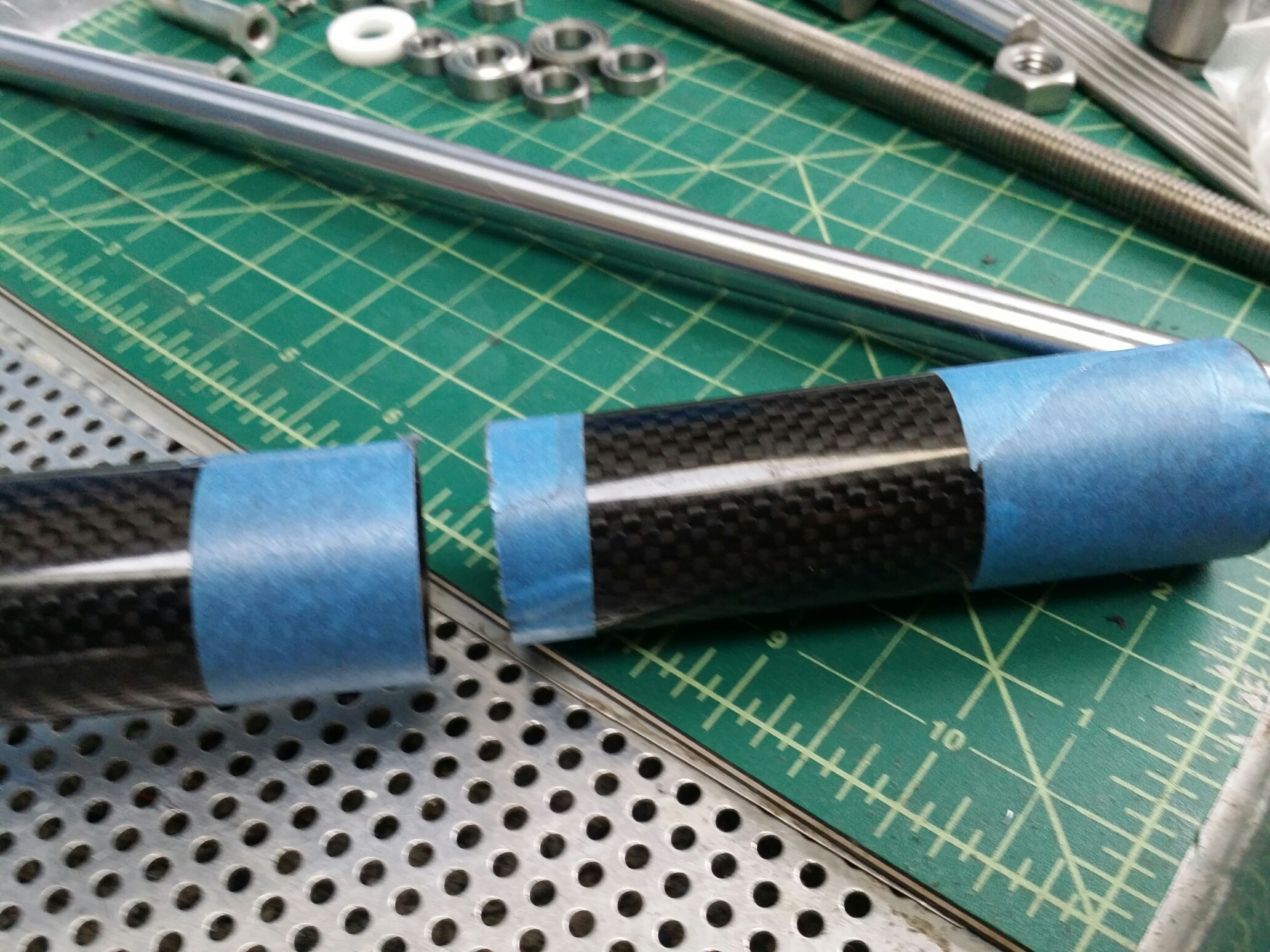 Tool tip: when cutting carbon tubes wrap a little tape in the cut zone to keep the edges from chipping from the miter saw. 30mm OD and 28mm ID. Was pleased with the quality of this tube.
Upvote 0 Downvote
You must log in or register to reply here.

CSL DD mods.. adapted my push/pull and made a shaft cover

Quick question about Clutches and H-Shifters?