In recent months I have been busy spending most of my spare time on "Research and Development" (R&D), that is, testing different ways of doing things, sometimes throwing away a lot of code when I realised better methods were preferable, or logical dead-ends, and the sometimes getting results that were even better than I expected.

Some of these ideas date back to 2009 when I spent months writing code that never found its way into BTB. In recent months I looked further into these ideas only to realise that another approach was better and hence months of coding was thrown away to be replaced with a better idea. Some ideas that initially seemed simple enough can contain "gotchas", that turn what I thought was going to be a days work into weeks of work. And still I am not assured that the work I have done will "eventuate" in the way I currently envisage. There is still much to do and I anticipate many months will pass before the results can be enjoyed.

This is still a part-time project for me, with a "real job" consuming my day. The difference with my 2009 effort is that I now take time out each day to spend with the family, and devote some to myself either playing piano, doing karate, or promoting a healthier lifestyle and campaigning for action on climate change, with the latter being the most important thing to me.

My attitude towards this planet has changed over the past 5 years; I've always loved the variety of animals and plants on this planet, and loved learning about our evolution to become the dominant species. But the feature of humans which made us the conqueror of all, now risks destroying the great biodiversity which makes life so interesting, and frankly on which mankind depends. This is why I now devote part of my time to improving my personal carbon impact, and help others to understand how they can reduce theirs. Having a scientific background I am still disturbed to find political debate and vested interests distorting the facts surrounding climate change when 98% of climate scientists known that the planet is warming, we are the cause and yes, it's happening at an unprecedented rate.

I don't allow the lack of action to get me depressed, as I might have done in the past. I simply do what I can and encourage others too. There is no rule that says humans are sensible enough to overcome the "excuses" for inaction, I accept that but take strong action personally. I cannot know the things I know about the climate (after years of study) and stand by silently. But I hope greater action happens soon and I can spend more time writing code and less time pointing out science facts to the uneducated or (deliberately) misinformed.

As for BTB, hopefully a new release in about a months time, after that there are some really exciting R&D things that I hope will make track building even easier and produce even better looking results.

That's quite a lot of juggling, but it's nice to see you're not letting your balls hit the floor.
B

I agree wholeheartedly with your concern about global warming and the environment. This is not a new phenomena, and allowing our politicians to continue delaying significant remediation has left us in a tenuous position to say the least.

As to BTB, we all are excited to hear of a new release.
M

Thanks Brendon for sharing this "slice of life"!
B 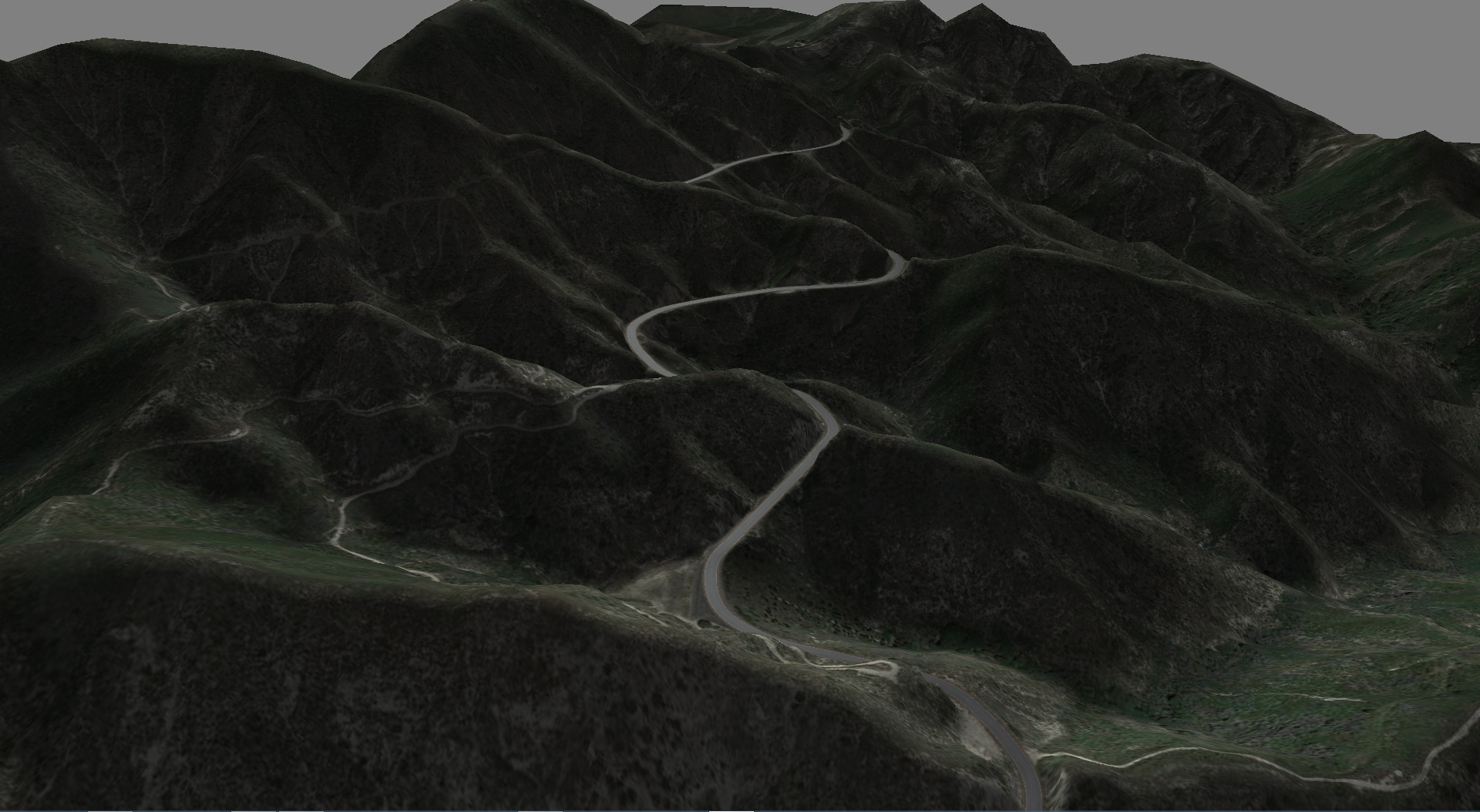 R&D progress continues with good results, and some really cool things I didn’t expect, and some things that I’ve gotten far too carried away with.

The snapshot here is 5kms of road near Los Angeles, heading up to the Angeles National Forest with the image and height data for the terrain obtained automatically from Google. It’s so much fun I’ve spent quite a few hours just toying with various locations around the world.

There’s a bucketload of other things I am working on as I take heed of the shortcomings of BTB and the feedback you provide. It’s obvious I won’t be able to address everyone’s requests, and I dare say that some people will strongly disagree with future plans. However I am satisfied that the direction I am taking is the best long-term solution for track builders as it resolves many of the current constraints and you’ll have a blast creating better, more realistic tracks in less time than ever before.

As usual, it’s taking a long time as work continues on a part-time basis blah blah blah. The good news is that I am REALLY excited by the progress made and am motivated to get this new technology into peoples’ hands ASAP. The bad news is I am REALLY excited by some things that aren’t quite ready and still need to make some major decisions before this stuff will be ready. Suffice to say, the best is yet to come!

Yuuummmm! Putting the icing on the cake, nice and thick.

woow Brendon, this is amazing, thanks for continue the updates.

That looks like a great development. I only make fictional tracks but I like to drape them over a real height map so I can get realistic gradients.

This looks incredible - I'm a recent purchaser and I love the ease of which I can go out for a drive, stick on a GPS trace and have a basic track within ten minutes of getting back home, but the terrain process definitely lags behind the track creation and manipulation.

A
Sessions not being recorded?