Codemasters have revealed their game for the 2014 Formula One season, along with their plans for 2015.

The 2014 game will contain all the updates you'd expect, like turbocharged V6 engines and the new liveries.The game also includes refined handling on a pad and a new driver evaluation system that tunes game settings to your skill level to increase accessibility.

Codies' creative director Stephen Hood said “There’s been a dramatic shift in the sport; the largest shake up in the rules and regulations for a very long time and the new power units provide a very different kind of challenge, for both driver and team. By delivering all of these changes, F1 2014 will make for an exciting and refreshingly different experience. Additionally, with the new driver evaluation system analysing each player’s skill level and suggesting appropriate game settings, plus re-graded difficulty levels including a brand new Very Easy setting, we aim to deliver a thoroughly rewarding F1 experience for players of all abilities, from the novice to the seasoned pro.”

There have also been updates to career and scenario mode, however no details have been leaked. F1 2014 will be released on 17th October (21st in north America) on current generation consoles and PC.

The 2015 Codies F1 title will release early next year, and will have live updates throughout the season to keep the game up to date. It will also only be on PC, Xbox One and PS4. This is all we know right know, no other details have been unveiled.
P

I didn`t see event 1 thing besides cars design what will be different from F1:13!

"Preorder now". Yeah, sure thing. As if it's going to be better than rfactor.
Y

They didn't get the licens for the alcohol ad because this game could be played from very young children who could be get drunk because of it this is so ridicoulus...
D

NOT...I don't buy this game if there aren't any new features (good features).

Premium
Wow, so many people moaning for no reason.
K

I want info about features and also i will wait even after its release and see how it will be , if i didn't impressed then i have AC any way with F1 2014 mods

It's a shame it's not CURRENT GEN.. but it looks OK so far, will buy it for pc anyway.

Korken500 said:
They didn't get the licens for the alcohol ad because this game could be played from very young children who could be get drunk because of it this is so ridicoulus...
Click to expand...

Doesn't matter. Me or the other skinners will just put the Martini text on it and problem will be solved


Kartik Sri Harsha said:
I want info about features and also i will wait even after its release and see how it will be , if i didn't impressed then i have AC any way with F1 2014 mods
Click to expand...

Yeah AC seems a lot more promising than this new CM game. Codemasters will have a hard time keeping their buyers. The number of sales are decreasing every year, and everyone knows why lol . I will also think between AC and f1 2014 and the first one excites me more.

Staff
Premium
The idea of releasing earlier and adjusting/updating where required through the season is a much better and more appealing release strategy for the game imo. The single most disappointing thing for me with this series is that by the time it arrives on the shelf much of the buzz of the current season has long since gone and I'm stuck into preparing myself for the winter sim season.

Releasing near the start of the season, at a time of year when I dabble more with the lighter side of the genre is a great plus for me, and probably for their sales given that there will be less triple AAA releases to compete with. The modders do a great job of trying to keep the titles current through the season but it's always great to get official content in a timely manner from any developer.

The music was too loud. Couldn't hear the engines

Another year before there are mid-season content updates (F1 2015). They made promises about this in F1 2012, updating the DRS zones to reflect the real zones announced by the FIA before every race, rather than the educated guesses that are in the game at release.

Did they do it? No. For some reason they initially failed to realise that there is a bit more to it than just re-drawing a line or two, and moving a couple polystyrene DRS track markers. So it was regarded as too much work, and they binned the idea.

No matter what you want this year, it's always results in a 'maybe next year' scenario.

I want the game(s) to be good, but the average life span of my game is about 2 to 3 months, then I move on to pastures new.

As for those worrying about sponsors (Martini, Kingfisher etc.), assuming the skins will still be moddable, then that's what our talented modders tend to jump on and fix straight out of the box. So keep your eye on the F1 2014 modding forum 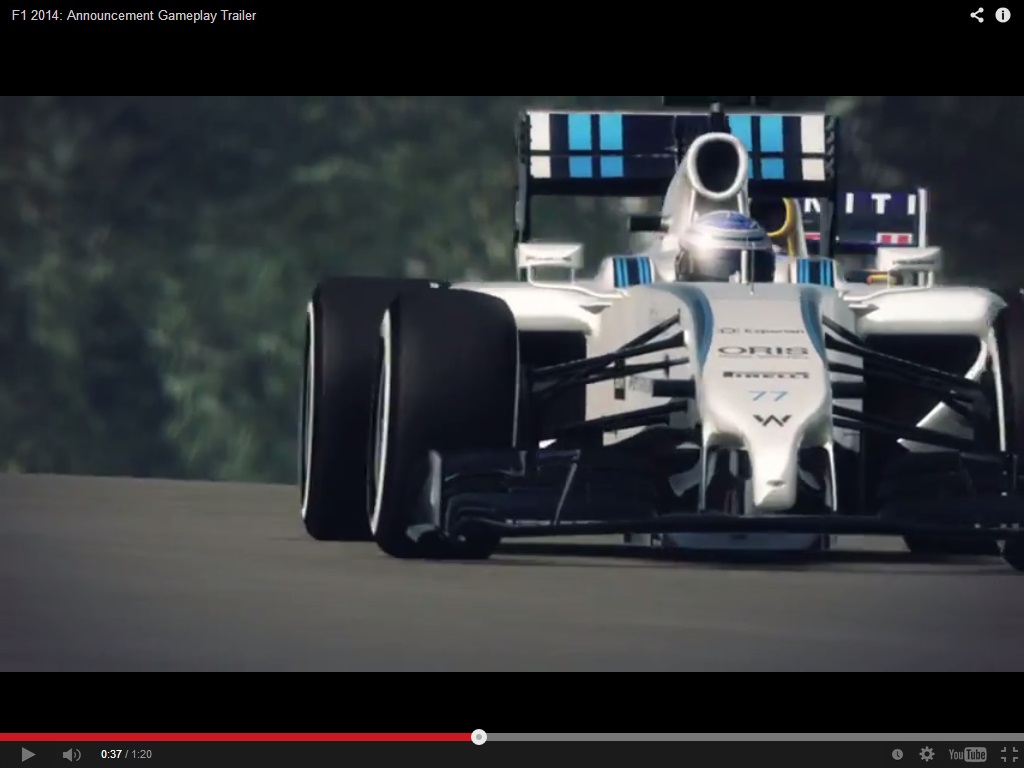 No Red at all??? I understand fully why Codies have to do this, but it looks sad really. The first modder who gets the Martini sorted will have so many downloads