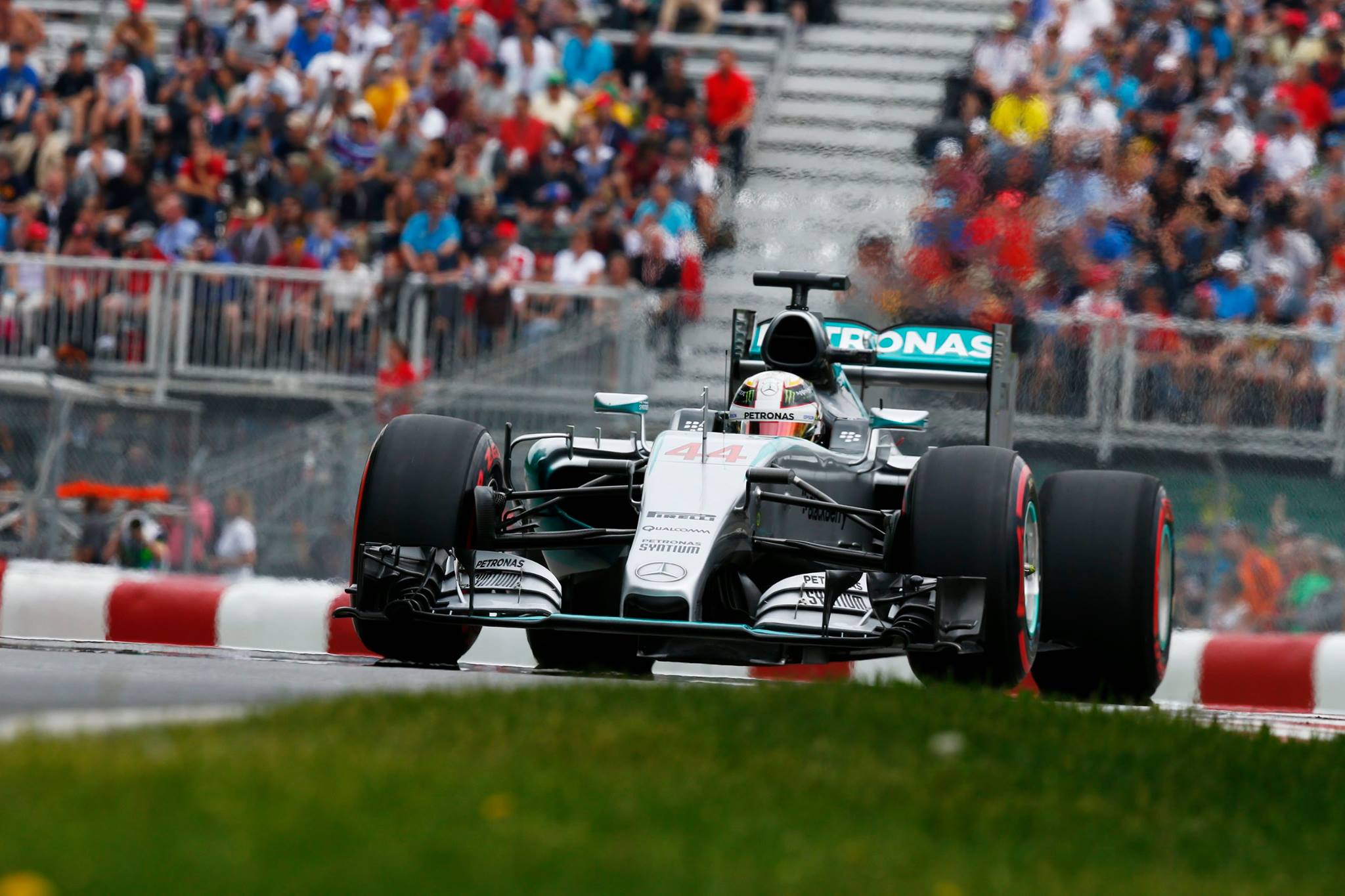 Hamilton, a three-time winner at the Circuit Gilles Villeneuve, beat his Mercedes teammate and principal title challenger Nico Rosberg by three-tenths of a second, and the dominant team in Formula 1 secured a seventh consecutive pole position along with their fifth front row lockout of 2015.

Our rundown begins in Q1, where Jenson Button's engine failure late in FP3 left the 2011 Montreal winner out of the running before the green flag flew for the first session. Further mechanical gremlins would strike runners up and down the grid, as the Ferrari of Sebastian Vettel suffered an MGU-K failure early in the session, lost several minutes to replace the damaged unit, and still didn't have enough in the reworked SF15-T to move him out of the relegation zone on his two timed laps. He would qualify 16th, the first time Vettel has not reached Q3 this season. Felipe Massa would also limp around in Q1 with an undisclosed engine problem that left his Williams FW37 short on power, and left him down in 17th.

Ironically, the problems afflicting Vettel, Massa, and Button meant that Fernando Alonso, who missed most of FP3 due to an engine change, would go into Q2 as the last man in. The combined five world championships and sixty-six Grand Prix victories of Vettel, Massa, and Button would be relegated along with the Manor F1 Team, where for the first time this year, Roberto Merhi would outqualify his teammate Will Stevens. Romain Grosjean was the fastest man in Q1, backing up Lotus' strong pace in the three practice sessions.

The switch to Q2 saw Hamilton and Rosberg finally show their hand in the middle of the session, with Hamilton going fastest in the second session by posting a best time of 1:14.661, and Rosberg trailing by only 0.012 seconds. Grosjean continued to impress by going third-fastest, four-tenths ahead of his Lotus teammate Pastor Maldonado in sixth.

Relegated out were the Saubers of Marcus Ericsson and Felipe Nasr - Nasr only being outqualified for the second time this season, but still encouraging for the Brazilian to bounce back after his rather awkward and heavy shunt in the middle of FP3. Carlos Sainz was just beaten to tenth by defending Canadian GP winner Daniel Ricciardo, but still outqualified fellow rookie Max Verstappen for the fifth time in seven races. With two grid penalties totalling fifteen grid places for an extra engine change this weekend, Verstappen will start the race from a seedy trailer park in Dartmouth, Nova Scotia, alongside an eccentric, bespectacled man who lives in a shed with several cats. Alonso qualified 14th to match his car number and recover as well as can be expected for the struggling McLaren team.

Rosberg struggled to get grip in his rear tyres and could not better his fastest time in the third and final qualifying session. Hamilton, however, went quicker by nearly three tenths of a second to take pole position in Montreal with a blistering lap time of 1:14.393. The two Mercedes will start ahead of the two Finnish drivers on the grid, as Kimi Raikkonen made good on Ferrari's demands for him to improve his qualifying form by going third, and Valtteri Bottas got his Williams into fourth in hopes of getting their Martini-coloured cars onto the podium for the first time this year.

Lotus drivers Grosjean and Maldonado will make up row three, with Grosjean outqualifying Maldonado for the sixth time in seven races and posting the fastest velocity in the speed trap at 340.6 km/h. It was also an encouraging session for the Sahara Force India F1 Team, as Nico Hulkenberg, one week before his Le Mans debut, and teammate Sergio Perez both got into Q3 for the first time since the German Grand Prix last season - they start seventh and tenth respectively. Daniil Kvyat qualified in eighth, to go ahead of his Infiniti Red Bull Racing teammate - and defending Canadian GP winner - Ricciardo for the second consecutive race.

Last edited by a moderator: Jun 6, 2015
Reactions: Ron Sandrin, airutonpurosuto8912 and Andrew
A

Lovely to see Kimi up there at the press conference eyeing out at the walls as per usual Great effort for him to capitalise on what happened to Vettel. Which is what it is but extremely frustrating. Bottas up there in fourth which puts a smile on my face. Then the surprise Lotus' which must be running lower downforce, seems like it's working for them. Then the Red Bulls and so on.