When I first heard that Mark Webber, the famous Australian Ex-Formula One driver and now FIA World Endurance Championship driver for Porsche, was about to release his autobiography I thought, "Fantastic! At long last we get to find out exactly what when on behind the scenes at Red Bull during those final tumultuous years".

Needless to say, Webber does not hold back and reveals things that even the most avid Formula One followers would have had no idea about unless their names were Sebastian Vettel, Christian Horner, or Dr. Helmut Marko. As it's an autobiography, the book is written by Webber himself, and chronicles the highs and lows of his childhood upbringing, his ascension through the junior ranks before his first big leap to Mercedes endurance racing and then finally onto Formula One, before finishing up back in the WEC with Porsche. Webber also delves into his personal life with his then manager, and now wife, Ann Neal and the difficulties they faced not only in the spotlight of motorsport with a driver forming a love interest with his manager, but also the pressure from Webber's parents, particularly his mother, to have settled down with someone a little younger than Ann.

At the start of Webber's junior racing career, he quickly worked out that if he wanted to reach the lofty heights of F1, he had to get out of Australia and move to Europe, which is where the real hot-bed of talent lies and would be his best shot at achieving his goal. Ann devised a seven year road-map and planned Webber's career path through the motorsport ranks to eventually end up in Formula One. However tough times hit, and 'Team Webber' had essentially run out of funds mid-way through the European Formula Ford series in 1997. However, he was able to continue after a lifeline investment from former Australian Rugby legend David Campese, who provided him with enough money to complete that year.

Webber moved up to Formula 3, and after achieving some success in a short period of time, including winning at Brands Hatch in what was only his fourth race ever in a Formula 3 car, Webber approached Norbert Haug, the then Mercedes AMG Racing division team boss, at the Australian Grand Prix ball and asked if he'd mind keeping tabs on his progress in the single seaters, and Norbert accepted. Little did Webber know what a brilliant decision this would turn out to be as in May of 1997 he received a phone call from Norbert asking if Mark would like to drive for them in place of Alex Wurz at the Nurburgring in the mighty Mercedes Benz CLK-GTR sportscar. Formula 3 was one thing, but a 7.2 litre V12 monster capable of reaching speeds in excess of 330 km/h was a totally different ball game. Webber's career took a turn that he hadn't necessarily planned for, but it was a massive step up, and was arguably even better than what he had originally planned.

Fast forward to 1999, and Mark had become a fully-fledged sportscar driver for Mercedes Benz, and was getting ready to compete for the first time at the legendary 24 hours of Le Mans. Many people who have followed Webber's career will know this as the most dangerous period in Webber's entire career. The Mercedes Benz CLR-LM had an unintentional aerodynamic design fault, which was triggered when the car was closely following another car at high speed. Essentially, the downforce at the front was dumped completely, and the car took off into the air and flipped spectacularly. To have it happen once is downright scary, but this happened twice in the same race for Webber. The amazing thing is that the Mercedes management team brushed it off and said that Webber was essentially the one at fault because they're the mighty Mercedes team, how could there possibly be anything wrong with their cars? That day, Webber came to terms with his own mortality twice. After Webber's teammate, Peter Dumbreck, also had his car become airbourne, Mercedes would conclude their sportscar program for that season, leaving Webber out of a job, but more importantly with his life in-tact and aiming to return to the open-wheel racing scene. 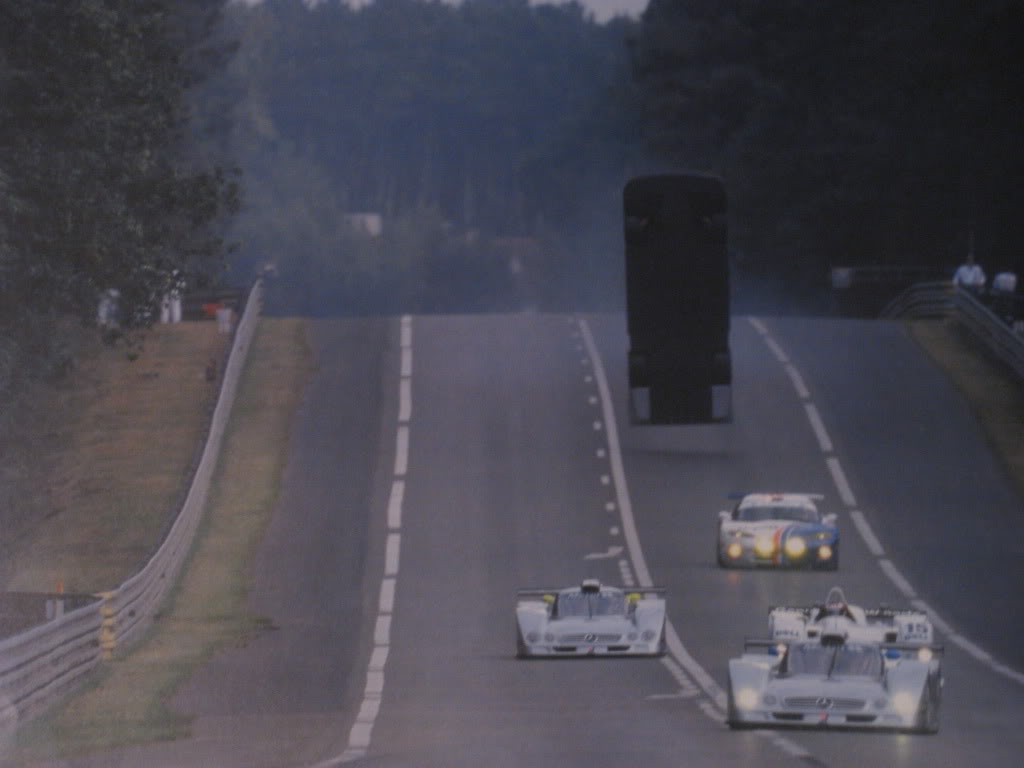 Airborne Mercedes became a common sight on that infamous day in Le Mans, 1999. ​
After the calamity of Le Mans, Webber took some time to get his head back in the right frame of mind, and to accept that the vast majority of race cars are in fact very safe, and that what happened to him was incredibly unfortunate and was unlikely to occur again. At the end of 1999, Webber got his first taste of being in a Formula One cockpit when he secured and completed a two-day test for the Arrows F1 team at the Circuit de Catalunya. He mentions that the rate of acceleration, cornering forces, deceleration and the general violence of a Formula One car is something that no other category of motorsport even comes remotely close to, and he wasn't even testing a particularly good car.

Webber was signed by Paul 'Stoddy' Stoddart, a fellow countryman and team owner of the Minardi outfit, for the 2002 Formula One season. Amazingly, despite a scrappy first race weekend in Australia, Webber was able to secure fifth place, and become the fourth Australian ever to score points on debut. After the podium ceremony, Ron Walker had organised for Webber to go up onto the podium to celebrate the occasion, however he wasn't entirely enthused at the idea because he felt that "... a podium, especially in F1, is such a difficult thing to achieve. I felt the only men entitled to be up there were the ones who had finished in the top three, not some local bloke who was fifth".

Incidentally, this is also where Webber began to realise the political game of Formula One as the race winner Michael Schumacher, had requested Mark to come to the Ferrari garage for some photos and a chat. In hindsight Webber realised that this was actually a tactical move by Schumacher, "shrewd operator that he was", because he had just won the race and didn't want the local boy to keep him off the front pages of the next day's newspapers.

After a disastrous 2006 season at Williams, Webber headed for greener pastures over at the new guys on the block: Red Bull Racing. With new management, an aerodynamic genius and a fresh look, Red Bull were looking to shake up the Formula One grid. Webber's teammate for his first season at Red Bull was the well known and much loved Scotsman, David Coulthard. Red Bull's opening campaign was a solid start with both cars running towards the front of the mid-pack, and even taking the odd podium.

2008. Enter Sebastian Vettel. The German prodigy of the Red Bull Young driver program, and tipped to be the next Michael Schumacher. Webber recounts that as soon as he took his first victory at the Nurburgring in 2009, he felt that an agenda was starting to be pushed by Dr. Helmut Marko, the Austrian fellow in charge of the ruthless Young driver program, and it was clear to Webber who was really pulling the strings at Red Bull. By the end of 2009, Red Bull were well and truly becoming one of the better teams on the grid, as they out-developed Brawn GP in the second half of the season, and closed the gap substantially after the former-Honda team started off incredibly strongly with Jenson Button and Reubens Barrichello.

In 2010 it was clear that Red Bull's chief aerodynamicist, Adrian Newey, was really starting to hit his stride when the Red Bull RB6 was launched, a car that many regard as one of the greatest cars in Formula One history. It may not have enjoyed the dominance of the Mercedes today, or cars from the past, or even it's successor, the RB7, but from a driving point of view, the RB6 was an absolutely mega car. One of the few cars that have truly been able to take Copse completely flatout. 2010 was the year where Webber would enjoy his best shot at the World Championship; he had the car, he had the tyres he liked, and he had a team mate who pushed him above and beyond. He started the year off strongly taking back-to-back wins in Barcelona and Monte-Carlo, which he feels was his best moment in Formula One. However, one race later he would qualify on pole again, but it was the infamous race where Vettel closed a large gap down the back straight of the Istanbul circuit, pulled along the inside of Webber, and the two made contact, ending Sebastian's race and causing a huge media frenzy. Contrary to what the team said in later rounds, Webber was in fact told to turn his engine mode down, similarly to the Multi-21 saga in Malaysia of 2013. In the end, Webber would fall painfully short of winning the title, leaving him utterly distraught, so much so that it significantly affected his preparation for the 2011 season.

I could go on and on to summarize and review the book, but it wouldn't do the book justice, especially when it comes to those juicy details in the team debriefs and even a full letter that he wrote to Red Bull head honcho Dietrich Mateschitz, in light of the events in Turkey of 2010.

All in all, this is a fantastic book that exposes the good side, and the dark side to motorsports, and F1 in particular. Webber admits he was never much of a politician in the paddock, and that may have worked against him, as all he wanted to do was just drive the car as fast as he could. But I get the feeling that politics was the real reason for him wanting to get out of the F1 fishbowl, rather than the new regulations coming in 2014. This book is an absolute must read for anyone who's daily 'Cuppa' comes with an octane rating.

Aussie Grit: My Formula One Journey sells for £14.99 on Amazon.

Staff
Premium
Excellent review Chris, I didn't even know this was being released yet.. thanks for the heads up.
Always was a fan of Webber, I'm sure just reading about what really happened at RB towards the end will ensure this goes to the top of the sales list!
Cheers
A

Nice writing of my most favourite WEC driver

Premium
Big fan of Marks. Great chap too. We used to live in the same village.

Thanks - better get that book!

When's this book coming out in the UK?

iZ GunDaM said:
When's this book coming out in the UK?
Click to expand...

10th September is the release for the UK.

Premium
I purchased the book last week and I'm three quarters of the way through it. So far, it's been an interesting read, well written, and informative. It seems to be a pretty honest account too, he openly admits that Seb Vettel was a better driver than him during the Red Bull era, but the behind the scenes politics of F1 motor racing was more surprising than I thought.

If Hamilton couldn't win a race, I wanted it to be Webber. Genuine fella, and the book will be on my Christmas list.

Premium
Thanks Chris, nice review and insight into the biography of one of Australia's motor sport greats, I will definitely be grabbing a copy asap, cheers.

I will be buying this book. Thanks for the heads up on it.
D

Maybe I'll buy this book if it comes to Brazil... with a reasonably price.

I just pre-ordered. Release date in the US is 10 September.
B

BoogerMac said:
I just pre-ordered. Release date in the US is 10 September.
Click to expand...