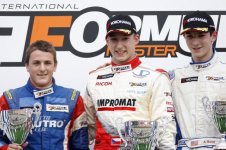 JD Motorsport’s Josef Kral clinched his first win of the season today in front of the Formula 1 teams for round nine of the International Formula Master Series (IFM) at the Hungaroring in Hungary.

Starting first on the grid after securing his first IFM pole position yesterday, Kral led the race from start to finish to score his and JD Motorsport’s first win this year.

Despite a good start, Jenzer Motorsport’s Fabio Leimer was unable to pass the young Czech and settle for a second-place finish, earning his fifth podium of the season. ISR’s Alexander Rossi enjoyed an equally strong start, passing TSP’s Earl Bamber on the first lap to take third.

Fourth place was secured by fellow Talent Support Programme Alexander Sims who also overtook Bamber, making his move on lap 14. Starting seventh, the young British driver showed solid pace throughout his first IFM race and could have challenged Rossi for a podium-finish had the race lasted longer than the planned 17 laps.

Bamber eventually finished fifth, ahead of AR Motorsport’s Paul Meijer who secured sixth place on his IFM Racing debut, despite JD Motorsport’s Sergey Afanasiev’s best efforts to pass him. Afanasiev took the chequered flag in seventh and will start tomorrow’s race on the first row, alongside ISR’s Erik Janis who secured round nine’s pole position by finishing in eighth place today.

Newcomer Samuele Buttarelli, racing under the Talent Support Programme, drove a solid race to secure 10th place from a 15th slot on the grid.

Kral is now second in the Drivers’ Classification thanks to today’s victory, along with a point for setting the race’s fastest lap in 1:39.067. Leimer still leads with 59 points, with Kral on 40 points. Pål Varhaug remains the leader in the Rookies’ Classication, with Rossi only 10 points behind. 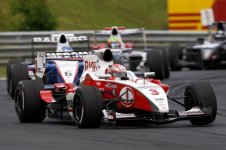 Oh lol that are more drivers than last week in Brands Hatch. Like 12 cars there 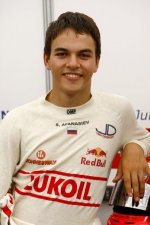 JD Motorsport claimed their second win of the weekend today, with Sergey Afanasiev scoring his first victory of the season in round ten of the International Formula Master Series at the Hungaroring in Hungary.

Starting from the front row, Afanasiev took the lead from ISR’s Erik Janis at the start and kept it for the 17-lap race, finishing first in IFM’s second round as a support series to the FIA Formula 1 World Championship.

AR Motorsport’s Paul Meijer secured second place on his first weekend in Formula Master, earning his team their first ever IFM podium-finish. The Dutchman passed Janis on the first lap and remained there unchallenged until the chequered flag.

Starting fifth, Sims was able to keep both rivals behind after passing Bamber on lap one, despite intense pressure from both Bamber and Leimer who swapped places throughout the race.

Afanasiev claimed today’s fastest lap, posting a best time of 1:38.696 and promoting JD Motorsport ahead of Jenzer Motorsport in the Teams’ Classification.

IFM’s 2009 season resumes next month at the Spa-Francorchamps circuit in Belgium for rounds 11 and 12, where the Series will partner its second FIA Formula 1 World Championship. Both races will be broadcasted on the pan-European channel Eurosport.

Sergey Afanasiev, JD Motorsport
“I made a few mistakes yesterday so this is a good way to make it up to my team. I’ve never started from second place before on the reverse grid so I wanted to make the most of it.

“It was fun as I was sure I would do my best; I knew I could win the start and keep the lead. It’s a good feeling; I’m really happy for my team! This is the best result this year; two races and two JD Motorsport drivers at the top.”

Paul Meijer, AR Motorsport
“I had another good start, which is great because it’s the first time I use gear-shift paddles! I took second place after the first corner and then made sure I was on pace and as consistent with my lap times as possible. I felt really confident in the car and its balance.

“I tried to get to Sergey [Afanasiev] for the lead but he was able to build a gap early on in the race so I couldn’t catch him!” 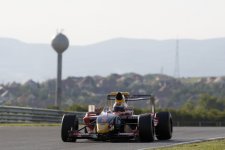 Good to see Paul Meijer is racing again,after his great debut in A1 GP
Hans

Did you see that yellow car. That guy is stupid!

The 2009 IFM champion secured his sixth pole of the year in this morning’s qualifying session before leading the race from start to finish and breaking the record for the most victories in a Formula Master season.

JD Motorsport’s Sergey Afanasiev raced to a second-place finish despite starting the race in sixth place. The young Russian climbed to fourth thanks to a strong start before passing team-mate Vladimir Arabadzhiev for third on lap two.

A retirement from second-placed man Pål Varhaug, driving for Jenzer Motorsport, on lap four then promoted Afanasiev to second place, which he kept until the chequered flag.

Arabadzhiev followed in third after defending his position from team-mate Josef Kral and Alexander Rossi for the majority of the race. The faultless performance allowed the Bulgarian to claim his fifth podium of the season.

Both Kral and Rossi stayed in position throughout the fight, finishing in fourth and fifth respectively. Having qualified second and sixth in this morning’s session, both drivers were handed a five-place grid drop for not respecting the track limits at T13 having set their best sectors.

Afanasiev and Kral’s respective performances in today’s race ensured that the team-mates are now the only drivers able to fight for this year’s runner-up spot in the drivers’ standing whilst Rossi’s top rookie finish means the young American is now leading the rookies’ classification with just one round to go.

Race two takes place tomorrow, Sunday 20 September, and will be shown on Eurosport International from 11.30 (CET).

Fabio Leimer, Jenzer Motorsport
“It was really important for me to get the seventh win; I really wanted to break Chris van der Drift’s record. That’s why it was really important to get a good qualifying and also a good start. I had a pretty good start; I was able to hold Pål [Varhaug] behind me. Then it was like every race, I was driving at the front, doing my own race and tried to be consistent as much as possible. In the end I was pretty fast and set the fastest time on the last lap.

“Now I can drive without pressure and it meant that today’s race was a lot of fun. But it was still very important that I concentrate on the race and not make any mistakes.

“There are places where you can overtake here but not a lot. Last year I started eighth and finished third though so when you’re pretty fast, it is possible to overtake and we will try to win the race. In Spa, I almost managed it but in the end the race was one or two laps too short for me to win so I will try again tomorrow. It’s not easy in the shorter race as there is even less time to get to the front from eighth but we’ll see!”

Sergey Afanasiev, JD Motorsport
“The first few laps were the best part of the race for me and the fight with Vladimir [Arabadzhiev] was also fantastic. I didn’t have a good qualifying so after that I had to do something as we are still fighting for championship positions. Most of my competitors were in front of me so I had to do my best during this race.

“Tomorrow is going to be a big race for the teams’ classification, between Jenzer and JD Motorsport. I also know that Josef [Kral] is my main competitor for the runner-up spot now but in my mind he has been the main rival all season so it’s something I have accepted and we’ll see what happens. I’ll definitely be fighting though as I want to be on the podium again tomorrow.”

Vladimir Arabadzhiev, JD Motorsport
“I had a pretty good start and was fighting with Varhaug but I think we touched and that unsettled my car a bit. After that it was really hard to stay on track and I didn’t do well in the last corner. That meant that Sergey [Afanasiev] was faster than me and overtook me at the end of the straight.

“After that I had to just keep going and try to be fast, especially in the last sector, to keep my position.”