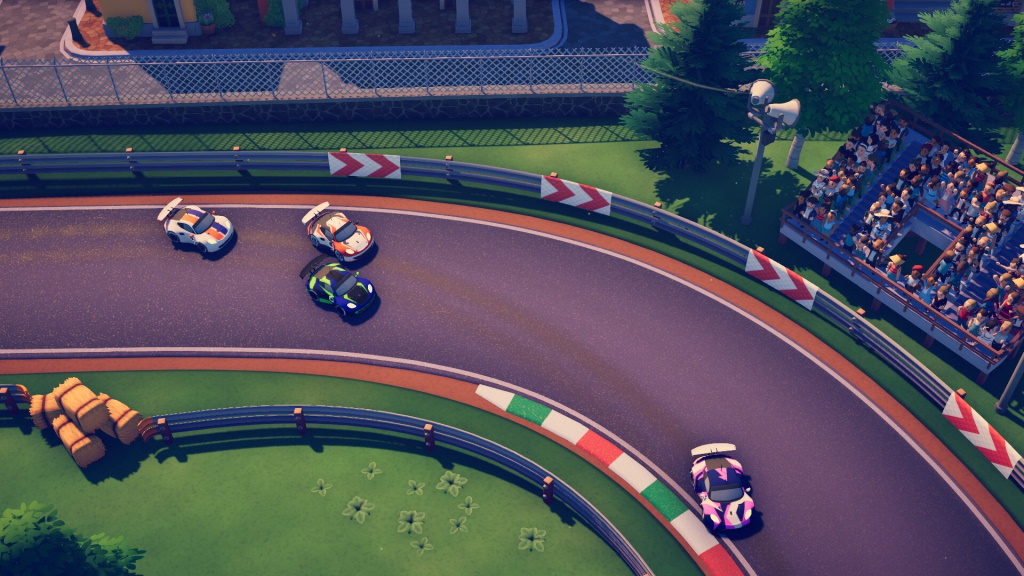 Fun racer, sim with cartoonish looks, or something in between? Categorizing Circuit Superstars is not easy, but the title should appeal to fans of both genres – the top-down racer that has been in early access since March, has now been released for PC and Xbox One plus Series S/X and promises equal amounts of fun and challenge.

Circuit Superstars’ first impression might make it look like a relative of Micro Machines or GeneRally, but it is much closer to Art of Rally, which uses a similar concept: Cartoon-style graphics, a top-down camera view and simple controls make the game very accessible, although the camera view takes some time to adjust to - sometimes it is hard to see what is coming up, or you might lose track of your car if there are multiple vehicles in close quarters.

If you expect to be fast without using the brake or drifting through corners, you are very much mistaken, however: Circuit Superstars uses some sim elements that reward a clean line, a controlled approach to using the throttle and even good strategy. Drop a wheel into the gravel or grass next to the track and you might find yourself spinning sooner rather than later, and maybe even in the barriers – which will not only cost time, but inflict damage to your car as well.

The damage system may be simple, but too many off-track excursions are not something players should make a habit of. Also included are fuel and tire usage, as well as pit stops where your vehicle’s condition will be restored. The amount of time spent in the pits is an important element, especially in longer races that appear in some championships in Grand Prix Mode – do you take less fuel to leave the pits earlier, or do you play it safe and wait until the tank is completely filled? These elements can be switched on and off depending on the player’s skill level and preference, which makes getting into the game easier but adds some depth for advanced players.

To submit your own review / rating of Circuit Superstars click here

Depth is also added via the game’s content: Twelve tracks, two of which are rallycross circuits, another one has an RX variant, are available on release, as well as a dozen vehicles – from 50s sportscars and racing trucks to modern rally, GT and Formula cars, there is something for everybody. Each vehicle has its own characteristics and needs a different approach to drive.
The various game modes keep Circuit Superstars from getting boring as well: The aforementioned Grand Prix mode lets the player compete in various championships against the AI, in Free Play mode, players can set up races any way they want, or try and get a spot on the leaderboards in time trials. There is an online multiplayer as well to compete against human racers. Additionally, there are weekly time trial events, such as the one using the free Top Gear Test Track DLC upon release allowing players to try and beat the times of famous names in racing like Romain Grosjean or Jimmy Broadbent.

Circuit Superstars is a great alternative for the sometimes stressful SimRacing schedule. The game does demand a certain amount of dedication, however, which makes it interesting to arcade racers as well as SimRacing experts. Developer Original Fire Games and publisher Square Enix have already announced that Circuit Superstars will be available on Playstation 4/5 and Nintendo Switch as well – and new content is in the works, too.

If you are looking to race in scenarios that are little bit less serious than your usual sim racing endeavours, Circuit Superstars may be the perfect fit for you: Even though it looks cartoony, it is far from a pure arcade racer - which means it is likely going to awaken your ambition to lay down the best lap possible fairly quickl
Reactions: axel vogt, Ricardo V. Soares, Adyl and 8 others

I like this kind if game. Will keep an eye on it.

Ricardo V. Soares
Looks nice. Downloading. However, if it lacks VR I don't it can beat Mini Motor Racing X. It's like having a fantasy Scalextric at home.
Have a look at Super Woden Gp that is a great game as well
Looking forward to Mario Kart review.
Last edited: Oct 15, 2021

valaz said:
Have a look at Super Woden Gp that is a great game as well
Click to expand...

I didn't like Super Woden GP. It's like trying to bring the gameplay of a racing sim to a top-down game. Not very enjoyable, but it's just my personal impression.
Where is the PS5 version
Well at least you don't need a 'monster' gpu to run it anyway
I'll echo Super Woden GP too, as well as Star Drift Evolution. Also worth a look are Traction - Downhill Rally on itch.io (though that's a bit slimline) and Omega Rally Championship on Microsoft Store.

SuperSpec RallyCross also looks good but went quiet at the start of 2021
https://twitter.com/i/web/status/1349438584592461830
A game of this genre I think is underrated is the Ultimate Racing 2D, which also features pitstops/tyre change and weather.

Ricardo V. Soares
This looks to be fun and nowhere near as stressful as an actual racing sim. I might buy if it's not too expensive.
I am telling you guys, IT IS A BLAST. Nothing can beat a game like this, and it is closer to real racing than you think. Just give it a try.

David Garcia said:
I am telling you guys, IT IS A BLAST. Nothing can beat a game like this, and it is closer to real racing than you think. Just give it a try.
Click to expand...

Can confirm!
Tested. Technically fautless, very smooth, with gorgeous graphics and very well made overall. As regards gameplay, it's quite good, but it would be much better at 2X speed. If feels a bit like driving on the moon. Also, why do all car have the same speed and behaviour?
VR would make it a game changer. id probably spend a LOT of time in it. but otherwise, i probably wont pick this up.
Could not share the enthusiasm so far. AI difficulty level was unbalanced and the career was very minimalistic.
But after the newest patch it looks promising. Will give it another go these days.

Icky427 said:
VR would make it a game changer. id probably spend a LOT of time in it. but otherwise, i probably wont pick this up.
Click to expand...

Are you serious? VR in a table top game? why? whatfor? I can`t imagine.
Game looks so good on my 34" widescreen, but its almost too big! Very challenging AI. It seems though, that they adjust the AI by limiting their top speed. The other guys smoke me in the corners - (they don't scrub any speed whereas any slip angle kills your apex speed) - but I'm passing them at the end of the straights. Same thing as in MotoGP20.

Also mentioned elsewhere on these forums, there needs to be a way to save progress in the middle of a GP. A career mode add-on would be nice too so I can't just jump into F1 or top-line endurance.

But for $20, its a fair price for the content and should offer oodles of smiles.

David Garcia said:
I am telling you guys, IT IS A BLAST. Nothing can beat a game like this, and it is closer to real racing than you think. Just give it a try.
Click to expand...

Just here to also add my full agreement to the above - it is an absolute blast.

Been playing this since the initial early access release and it just keeps getting better.

VirtuaIceMan said:
I'll echo Super Woden GP too, as well as Star Drift Evolution. Also worth a look are Traction - Downhill Rally on itch.io (though that's a bit slimline) and Omega Rally Championship on Microsoft Store.

Ricoow said:
Where is the PS5 version
Click to expand...

The PS4/PS5 port is still a work in progress.

Windows PC and XBOX is effectively the same OS, so presumably requires less work to port a PC version to XBOX than it is to a SONY console.