Log in to download, or make sure to confirm your account via email
Overview Updates (4) Reviews (26) History Discussion
WHAT AND HOW
If you, like me, don't like Assetto Corsa ugly spectators because you think they take away realism then this is your mod. This mod works by replacing Kunos original spectators textures, usually just four dds files on most tracks, to make people become invisible. It does not remove marshals or pit crew, it only removes spectators. Also it does not improve frames per second because the replaced textures are small.

Before and after applying this mod.​ 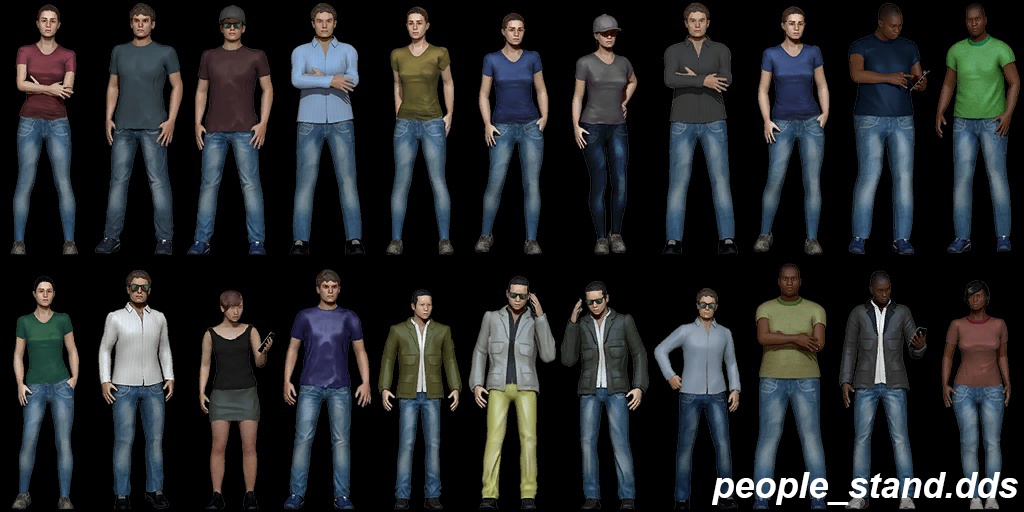 Kunos original spectators textures like this will be replaced by empty dummy files.
​
INSTALLATION
To install just download the mod, extract the zip and copy the content over your Assetto Corsa root folder and overwrite everything when asked. Backup the original files if you want to revert the mod in the future. Be warned that if you didn't install some of the tracks supported by this mod you will end having some empty folders in your "assetto corsa/content/tracks" folder.

COMPATIBILITY
Works with all Kunos tracks, with all mod tracks that use Kunos textures and with the mod tracks listed below.

The spectators always look out of place so much it kills the immersion. Does exactly what is says on the tin.
i can use it as a skin with CM
no zombies any longer :) thanks
After seeing Nordschliefe without the added spectator textures, I realized that it looked as if there had been a litter clean-up across the entire track. The 3d people and various track-side objects look as intended now. Now it is obvious the added 2d spectators fouled the intended visual design of the track. It is truly beautiful now.
Thanks :)
I like the people on the track. Hermanos Rodriguez Arena is so empty! Is it possibile add more people into the tracks?
great
Great,thanks!
Excellent !!! My replays look much better now without cardboard cutout populace!
Perfect! No more low-res reptiloids on tracks.
Holly Crap 100/100
Good job
Well done, I, like you, really dislike the spectators. :)
Brilliant idea and one of the most useful and effective mods for Assetto Corsa;
Thank you very much !!
Thank you, very needed modification.
It's like you read my mind ;D

...never understood the need for them, they add nothing to the experience imo.
Nice, thx you really! Spectator in AC are really too flat lol Like old gen object with a bad jpg picture in it lol. Like a game "Who am I?"
Thank you! Great app, much appreciated.

Thanks to the author for the credit however, as much as I would have loved to contribute, I had nothing to do with it.
Works great!
Well done. Excellent, no ugly people.
Small mod, Big difference. Can't believe this wasn't done ages ago. Well played.
I wish this mod would work IRL.
Excellent! Simply but effective
Absolutely perfect!!!!!!! Thank you very much, as this has been an issue with me since I started playing this awesome game (It makes it look cheap imo) Much appreciated .
Now this is awesome and useful. Hate the crowds when using this hotlap simulator
Read more…
84 comments
AMS 2 | Update Delayed Until August 11th - New Silverstone Previews
18 comments
F1 2020 | A Guide To ERS Management
22 comments
RD Review | SimLab Owner? Check Out The Apex Sim Racing SimLab P1 Dash Pods
112 comments
2020 70th Anniversary Grand Prix
52 comments
BREAKING NEWS | Racing Point Docked Points Due To Mercedes Copygate Protest