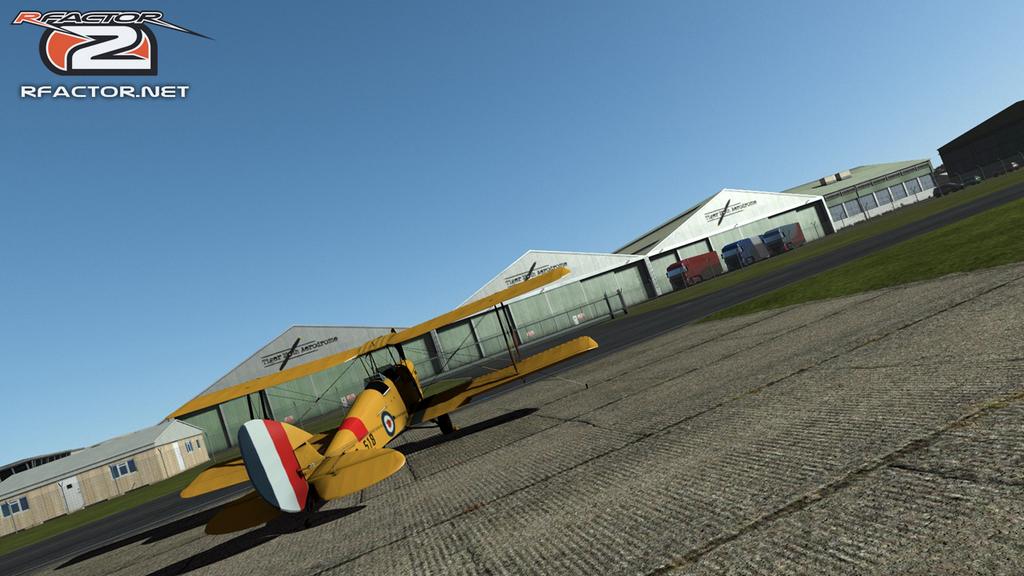 Tiger Moth Aerodrome - Dunsfold Aerodrome, a.k.a. the Top Gear test track - has been released by ISI for rFactor 2.

This well-known circuit is home to the equally famous Stig. It has seen a number of celebrities run wide at Hammerhead, and career into the grass at Bacharach and out of Gambon at they give hot-lapping a go in the Reasonably Priced Car. In addition, a vast variety of cars - priceless classics, modern machines, race cars (including Fernando Alonso's 2006 championship winning F1 car), supercars, and the rest - have all been driven around the track at the hands of the tame racing driver. Unfortunately we won't be able to try many of these cars, certainly for the time being (come on ISI, you could have at least given us something new to play with as well).

The track was first released under its official name, Dunsfold Aerodrome, by ISI developer Tuttle as a 3rd party mod for rFactor 2 in March 2012. It was a "work in progress", but already an impressive looking track.

​
The track was updated several times, with the last version being released at the beginning of 2013; this was used for one of the hot-lap challenges that we ran back in July. However, Tuttle had bigger plans for the track, and after a year and a half of fine tuning and optimising it has finally been released as official ISI content under the new name, Tiger Moth Aerodrome.

Some say rFactor 2 will only get better, and become more popular: all we know is that Tiger Moth Aerodrome is available now - you can download the track here. The circuit comes in 5 configurations - 3 races layouts, and 2 versions of the test track (with and without cones).


Now it's time for The News: to mark the release of this track, RaceDepartment's rFactor 2 club have got some real treats in store for you - over the coming weeks, we shall be hosting a number of races at the circuit. Keep your eyes peeled in the Racing Club section for more information regarding upcoming events.​
And on that bombshell the only question left to ask is, can you beat The Stig?!

This track is so much fun in RF2. Great work by ISI.

Some say rFactor 2 will only get better, and become more popular: all we know is that Tiger Moth Aerodrome is available now.... Jeremy Clarkson could not have said it better... And on this bombshell i'm heading towards the ISI downloads section.

I cannot wait to get this round the Tiger Moth aerodrome. Looks epic.

Sorry I did not realise the NSX info belonged with this. I am just excited about rfactor 2 again.

Some say that James May flew the Tiger Moth to the aerodrome reported some buffetting and compared it to driving a pre war Morgan 3 wheeler.
Some say that the new tame racing driver is AI. All we know is that he is called the Stig.
Next week we will review the practicality of using the Aston Martin Lagonda for charity work in Botswana.
Nuh I couldnt really come up with a good one.
Anyway great news.

Third party makes me believe they collaborated with Game Stock Car Extreme physics genius - Niels Heusinkveld - who had released the Honda NSX as a free RFactor1 Mod almost a year ago.