My Logitech G27 has developed some issues with its' FFB. I've looked around the webs, and it's always the encoder or axial play. I haven't found any videos or posts with my issue. I opened it up yesterday, but didn't see anything wrong. There's a crackle or a rattling sound, as if a spring is nudging against something when I turn the wheel with FFB on. And in game it's hard to correct the wheel when turning, or making sharp precise movements. It's as if precision is non-existent - it's hard to explain. I'm never in control, it's now always merely a matter of staying on the road. I recorded a video of the sound, best heard from 0:08 to 0:13. Anyone fixed their G27 with such issue? What could it be..

Anybody? This is driving me mad. As far as I know, there are springs under these shock absorbers 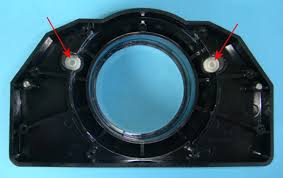 But these seem fine to me. When the wheel is opened up and I physically move the main rod, there's no spring sound. So it must come from the motor? Has anyone opened up the G27 motor?
Last edited: Mar 21, 2021
N

Wish I could help but no idea what's going on here, sorry. Have had mine in bits (years ago) but nothing comes to mind that would explain these sounds...