Spanish GP: Rosberg fights back with first pole of year 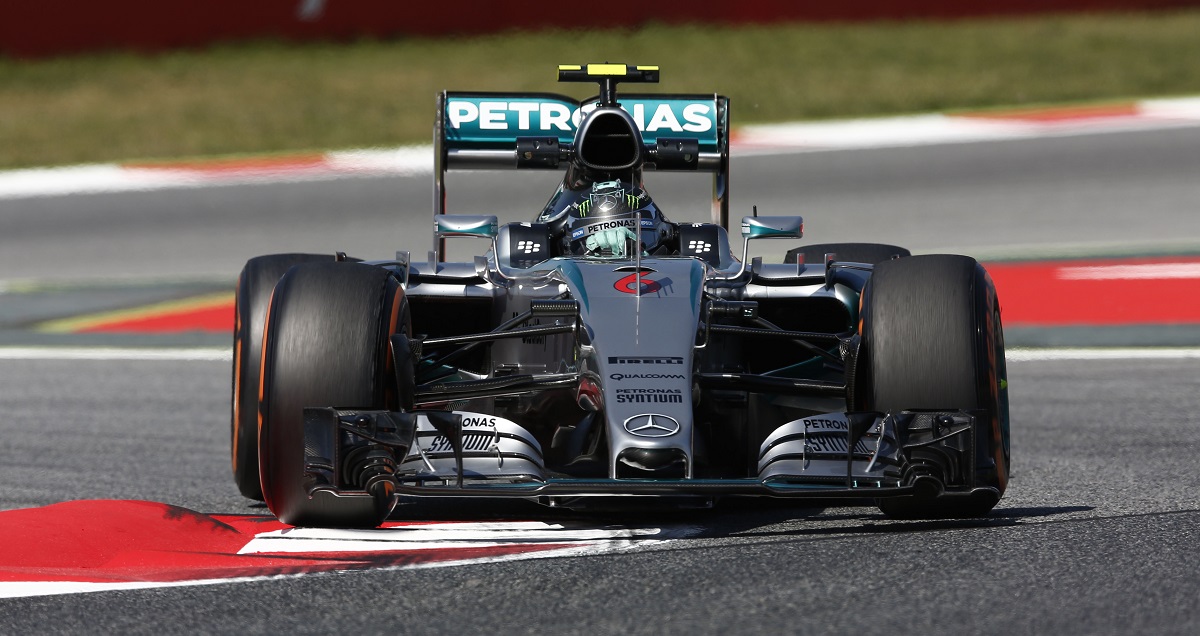 Nico Rosberg fought back from his poor start to the 2015 season with a first pole of the year today in Spain. The Catalunya track in Barcelona is well known to all the F1 teams with it's prodigious use in pre-season testing, although today Rosberg looked a cut above the rest as he easily claimed pole. Hamilton looked slightly off the pace today and couldn't match Rosberg, although will look to claim a fourth victory of the year in tomorrow's race.

The Q1 session began under bright sunshine providing extreme heat, something that everyone initially struggled to adjust to in this session. With an immediate quiet period as the green light went out to signify the start of the session, with Roberto Merhi the first car to trickle out on track.

The front runners all decided to go out on the hard tyres, which needed two laps to set a competitive time. Nico Rosberg set the first a fast lap with a 1.27.677, although this was quickly usurped a minute later by Lewis Hamilton, who set a 1.27.322 time to go fastest. After this their was a lull at the front of the grid, although strangely enough with a few minutes remaining in the session Hamilton decided to go out for a second run. With less than a minute remaining, he blitzed the field with a 1.26.382 time, a whopping 1.295 seconds faster than team mate Rosberg in 4th.

At the back of the grid, with the usual frantic scramble in the final seconds and beyond, eventually once the dust had settled it was Marcus Ericsson in 16th, the Sahara-Force India twins Nico Hulkenberg and Sergio Perez in 17th and 18th, in front of the two Manor's of Will Stevens and Roberto Merhi who start on the back row in 19th and 20th who were all eliminated.

Q2 began similarly to Q1, with Valtteri Bottas the first of the front runners to set a fast time with a 1.26.197 lap. His fastest time didn't last long however as Hamilton, despite being told to look after his set of tyres, went fastest once again with a 1.25.740 lap time. Nico Rosberg then disrupted proceedings by blasting to the top of the times with a 1.25.160 lap time, a cool 0.5 seconds ahead of title rival Hamilton.

This time around the scramble of the final minutes was relatively sedate, with a big gap of 0.4 of a second between the top ten and the rest. This meant that for the first time this season Romain Grosjean was eliminated in Q2 with 11th overall, with Lotus team mate Pastor Maldonado behind him in 12th.

Behind them two are the two updated McLaren-Honda cars, who have seen a significant improvement this weekend with their new aero and engine updates. Fernando Alonso and Jenson Button line up 13th and 14th. The final man eliminated in Q2 was the Sauber of Brazilian rookie Felipe Nasr, who lines up 15th.

The scene was set for the final 12 minute Q3 shootout, with honors even with both AMG Mercedes drivers topping a session going into Q3. After the first flying laps had been completed it was Nico Rosberg who was on provisional pole, stating his intent this weekend with a 1.24.681 lap that was close to 0.3 of a second ahead of Hamilton, who set a 1.24.948 time. The Ferrari of Sebastien Vettel was lurking behind in 3rd, with the Williams of Valtteri Bottas completing the top four.

The track went quiet as everyone returned to the pits, steeling themselves for their final runs in the dying minutes of the session. As everyone set out on track, the session was finally poised to see from frenetic action as the two AMG Mercedes drivers fought it out for pole position. Unfortunately for the spectators, no one at the front of the grid was able to improve on their first laps, leaving Rosberg to claim his first pole position of the season, a much needed confidence boost as he looks to get back on terms with Hamilton after a difficult start to the season.

Hamilton will be disappointed that his pole position run has come to an end, although will feel he still has a great opportunity to take the victory in the race tomorrow, as he explained afterwards he simply felt off the pace in qualifying today. Sebastien Vettel is content with third on the grid, although of course would like to close the gap to AMG Mercedes as he hopes to put further pressure on them.

Valtteri Bottas lines up 4th in a good session for him and the Williams team, Carlos Sainz Jr will be delighted with his performance today as he claimed a highly impressive 5th on the grid at his home race. His Scuderia Toro Rosso car has looked very good this weekend, with both team mates Sainz Jr and Verstappen exploiting their car to the fullest extent here with 5th and 6th on the grid.

Kimi Raikkonen will be slightly disappointed to be so far behind his team mate Vettel as he starts 7th, with the Red Bull man Daniil Kvyat sharing row four with him in an impressive 8th for the young Russian. The fifth and final row of the top ten consists of Felipe Massa in 9th for Williams with the second Red Bull of Daniel Ricciardo starting 10th.

This qualifying session has left tomorrow's race finely poised, with both AMG Mercedes drivers looking to battle it out for the Spanish Grand Prix victory, although Sebastien Vettel will not be far behind them should they trip each other up tomorrow.