Some questions regarding FFB and car physics

I'm a great fan of the FFB in the Race series.

- So how is FFB with a G25 in GT5 Prologue compared to Race07? Do you enjoy it?
- How is the car handling? Would you say it is a simulation or just a good racing game which tends to be a litte "arcadish"?
- Visuals? Probably pretty good, or?

I'd say the FFB is as good as I've experienced in other games like the RACE series, to me the cars feel realistic and the FFB allows me to race on the edge of the cars performance envelope. Graphically GT5P is far better than the RACE series. 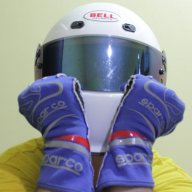 I also echo the above of Mr. Watts.

GT5P is a visually stunning game. As all the previous iterations of the series as PD, (Polyphony Digital), are exremely good at ringing every single Playstation consoles neck when they design their games.

It's a great game with the pad but having just started playing it with the G25 the experience has improved 100%
The cars all feel heavier and connected to the road mimicking(sp?) the feeling of every bump, rumble strip, gradient change and skid through the wheel.
I feel like I am driving better and faster now I am using the wheel due to the extra feeling I have of the cars and their grip levels depending on how hard I push them.

I did read on another site that the best FFB setting to use on GT5P was 10 - Is this right? What do any of you guys recommend? 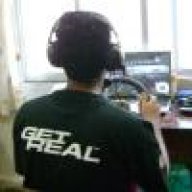 My G27 gives variable behaviour for the same setting.. at first FFB set to 2 felt awesome with distinct vibrations from rumble strips being felt to perfection but some time later the wheel slipped (or steering rotated?) when the strips came & so I changed to 10 FFB & now the car seemed much more steerable but vibrations were not so distinct & the wheel just oscillated when I left it free..
M

To me, both Polyphony and Simbin approach their FFB design quite differently. In Race 07, the FFB are stronger and gives out a lot of info (engine rumble, bumps in the road) although at times it can feel a bit canned. Still, you do get a great sense of immersion which makes racing more engaging. In Prologue, the FFB are not as strong (I have my G25 set to max in the game) and you don't feel the road as much. But it does feel a bit more organic- by that I mean it feels as if each of the FFB components are seamlessly connected to the next. The effect is that you can sense the difference between the cars more clearly.

Again, the same applies to physics. Those who aren't used to GT physics might find it problematic in certain areas. One of them being tire grip. Unlike racing sim which is based around GT or open wheel race cars with racing slick and stiff suspension, most of the cars in GT are road/production cars with either "S"(Sports) or "N"(Road) tires and softer and pliable suspension. With softer suspension and the heavier weight of production cars, you have to deal with weight shift/transfer between the tires that usually the cause for loss of traction during cornering (sometimes more than the tires themselves). That's why in GT5P, you would even lose traction even at low speed cornering- if you're turning right, and weight of the car shifts mostly to the outside (left side) and you apply too much gas, the car would then spin. It's less common in racing sims like Race 07 because the suspension is much stiffer and the cars are usually lighter.

Nice observation that & that's why I don't enjoy my wheel with the console much. Things are different when you're driving cars like the Ferrari F2007 though . I really do hope that Polyphony are improving the FFB support with wheels all this while
M

Rudra Chattopadhyay said:
Nice observation that & that's why I don't enjoy my wheel with the console much. Things are different when you're driving cars like the Ferrari F2007 though . I really do hope that Polyphony are improving the FFB support with wheels all this while
Click to expand...

Personally, I find the recent TT demo to be quite an improvement over Prologue both in physics and the FFB. It still has the basic feel that GT games have always had but it'd different enough to give me a good indication of where GT5 is heading. The first thing I noticed is a much more defined sense of weight (to the car). During cornering, you feel the weight shifting closer to the suspension and tires and revolves closer around the axis of the car. The result is that it becomes more an effort instead of just simply turning the wheel. I also noticed how much more pronounced the difference between the normal and the tuned 370Z. Not only is the suspension stiffer and the tire stickier but that each car requires a completely different style of driving. Of course, there's still room for improvement- I like the FFB to feel a bit more rubbery, a bit closer to what iRacing imparts.

Good to hear that there are improvements in the right direction.. I didn't try the TT demo as I don't have an ethernet connection, but at least I can hope to see better driving physics when GT5 will come out.
You must log in or register to reply here.
Share:
Facebook Twitter Reddit Pinterest Tumblr WhatsApp telegram Email Link
8 comments
F1 Testing | Day 1 - Mercedes On Top
38 comments
Formula E | Female Racer Powell To Test For Envision Virgin Racing In Marrakesh
8 comments
Check Out The 'Drive to Survive' Season 2 Trailer
4 comments
ETS 2 / ATS | FMOD Sound Updates In The Works
17 comments
WTCR | Three Race Format Dropped For 2020
Top Bottom