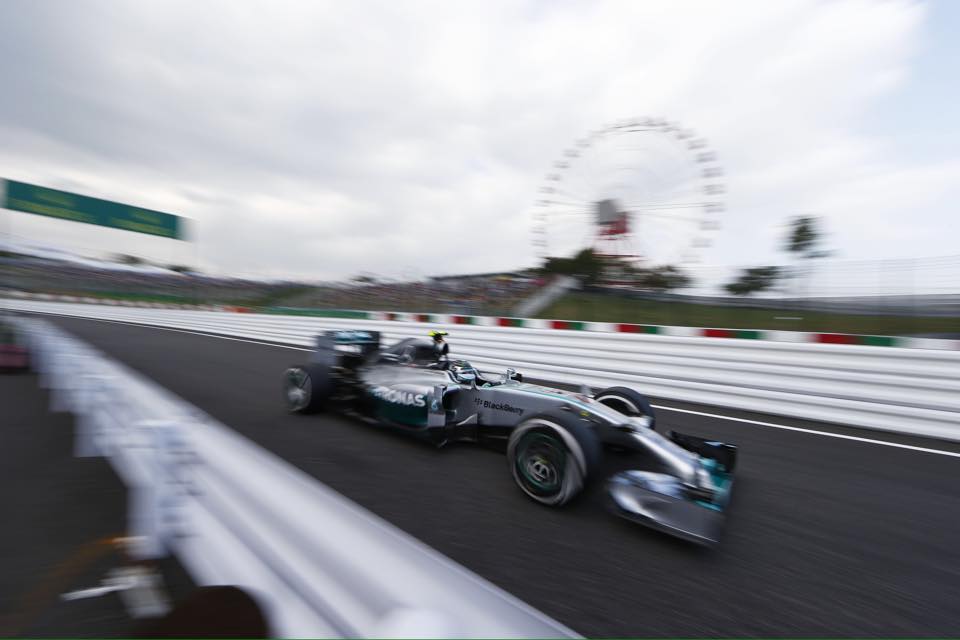 After the earlier shock before the session relating to Sebastien Vettel and Ferrari, the excitement for this Japanese Grand Prix qualifying session seemed slightly dampened with the earlier news. Nevertheless, with a potential typhoon coming for the race tomorrow qualifying could prove to carry extra importance here.

There were no signs of the impending typhoon for qualifying as the session began under sunny skies, with a lot of cars coming out early on in Q1, leaving a congested track in the opening minutes of the session.

Of the leading cars Lewis Hamilton edged AMG Mercedes team mate Nico Rosberg for the fastest lap with a 1m33.611 lap, 0.060 faster than Rosberg. It was clear from Q1 that the two AMG Mercedes were going to be in a class of their own this weekend, with their opening laps 0.690 faster than the challenging Williams.

It seemed early on this weekend the closest challengers to AMG Mercedes would be the two Williams of Felipe Massa and Valtteri Bottas alongside the Ferrari of Fernando Alonso. Q1 went relatively quiet in the middle period of the session as the top 10 consolidated their place whilst those outside it looked to their final runs to improve.

The two Red Bull's seemed to be struggling from the time the session started, with both Sebastien Vettel and Daniel Ricciardo struggling just above the drop zone in Q1 as they risked elimination to stay in the pits for their final run and therefore save a set of tyres.

Their gamble paid off as they went through to Q2, unlike the two struggling Lotus-Renault cars who both went out in Q1 with Pastor Maldonado and Romain Grosjean coming home 17th and 18th, with Marcus Ericsson impressing to bring his Caterham home 19th, with Jules Bianchi for Marussia, Kamui Kobayashi for Caterham and Max Chilton in the second Marussia behind him.

The Q2 session began slowly as the cars trickled out, with Valtteri Bottas setting the first flying lap with a 1m33.801 laptime after a few minutes of the session. Immediately after this Nico Rosberg responded with a scintillating 1m32.950 laptime with Hamilton 0.32 of a second behind after both had completed their first flying laps. Again the two AMG Mercedes were well clear by 0.851 of a second from the two Williams.

Much like Q1 the two Red Bull's were again struggling as they began their final runs in Q2 looking to squeeze through to Q3. Both cars were able to scrape through as unfortunately Jean Eric Vergne and Red Bull junior team Scuderia Toro Rosso missed out in 11th. Sergio Perez was 12th for Sahara-Force India with Toro Rosso rookie Daniil Kvyat in 13th, Nico Hulkenberg in 14th with the two Sauber's of Adrian Sutil and Esteban Gutierrez rounding out the top 16.

Q3 began again with a slow start as the two Williams were the first one's out for their first runs of the session. Bottas set the first flying lap with a 1m33.329 laptime. The two AMG Mercedes immediately responded with Rosberg setting the fastest laptime after the first runs with a 1m32.629 laptime, with Hamilton 0.3 of a second behind as the track went quiet before the final runs would begin with a few minutes left in the session.

The final runs for pole in Q3 would be relatively sedate as the track seemed to improve slightly leaving a majority of the field to improve by several tenths. The race for pole proved to be an anti-climax also with Rosberg snatching pole by close to 0.2 of a second from Hamilton, who recovered well from a Free Practice 3.

The two Williams share row 2 with Bottas ahead of Massa, with Fernando Alonso 5th for Ferrari alongside Daniel Ricciardo for Red Bull in 6th to complete row 3. The two McLaren's make up row 4 with rookie Kevin Magnussen beating Jenson Button. Sebastien Vettel seemed out of touch today as he struggled home in 9th alongside his potential team mate for next year Kimi Raikkonen who completed the top 10.