Rosberg on pole, Hamilton's hopes up in flames 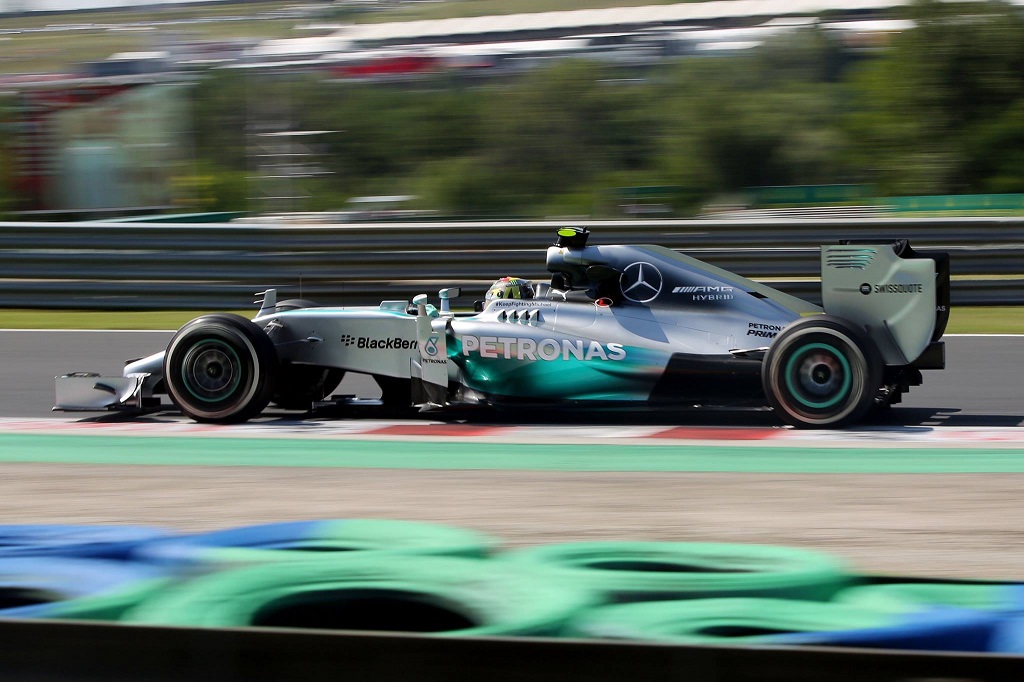 After last week's German Grand Prix, the F1 circus made the relatively short trip across Europe for the Hungarian Grand Prix, the last before the August Summer break. After his troubled weekend last time out Lewis Hamilton was hoping to make up some ground this weekend at a circuit he's always traditionally excelled at.

The qualifying session got underway under Sunny yet slightly cooler conditions, and it wasn't long before Q1 claimed it's first victim as the Lotus-Renault of Pastor Maldonado was forced out the session with a loss of drive early on, condemning him to 22nd for tomorrow's race.

It wasn't long before Q1 claimed it's next victim as the AMG Mercedes of Lewis Hamilton was forced out with a rear end fire a few minutes into the session. The speculated cause was a fuel leak, and because it occurred before Hamilton had set a lap time, means he will struggle to trouble the top 5 tomorrow from 21st, as this track is renowned for being difficult to overtake at.

Back at the front, and it was his AMG Mercedes team mate Nico Rosberg who was restoring pride for Mercedes as he went to the top of the times with a 1m25.2 on his first qualifying run. It appeared he was safe at the top, although he was surprisingly knocked off top spot by the Scuderia Toro Rosso of Jean Eric Vergne, who used the soft tyres to go fastest in the final minutes of Q1.

Behind them, a much bigger shock occurred in the final seconds as the Marussia of Ferrari junior driver Jules Bianchi managed to bump the Ferrari of Kimi Raikkonen out of qualifying, no doubt sending a clear statement of intent for the future as he left Raikkonen starting 17th tomorrow. Also eliminated in Q1 were Kamui Kobayashi, Max Chilton, Marcus Ericsson and the unfortunate Lewis Hamilton and Pastor Maldonado. 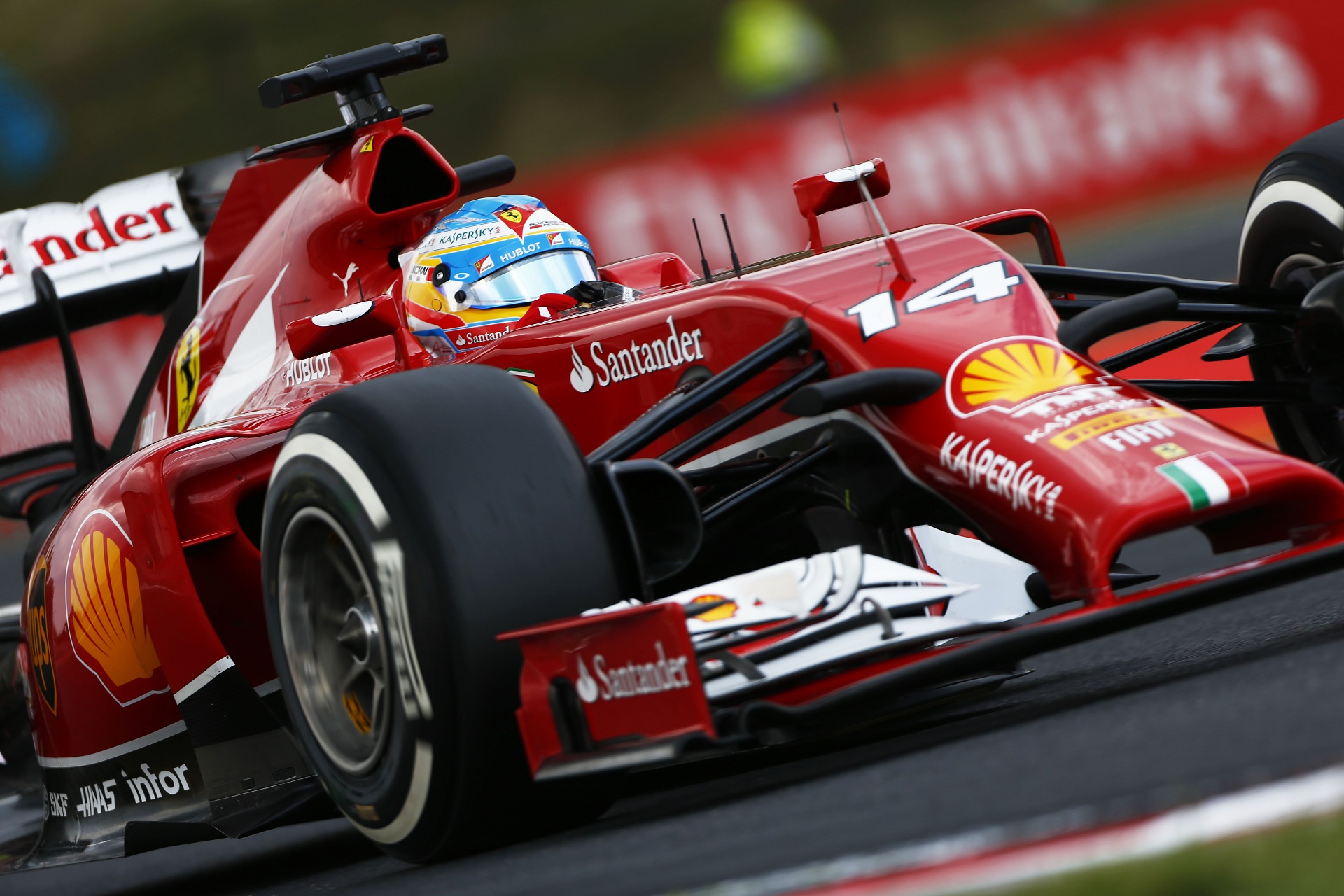 Q2 began with a flurry of fastest laps from the likes of Red Bull and Williams, before Rosberg once again put the rest in their place as he stole pole on his first run with a 1m23.2, a cool 0.691 seconds quicker than the rest. This time Rosberg would not be demoted from top spot as the action occurred behind him.

Sadly, the final shootout to make Q3 was a non-event as rookie Daniil Kvyat spun his Toro Rosso car at Turn 12, which meant no one was able to improve their times in the final seconds as yellow flags flew.The yellow flags ensured it was Kvyat who was eliminated in 11th, with Adrian Sutil in 12th for Sauber, Sergio Perez, Esteban Gutierrez, Romain Grosjean and Jules Bianchi.

The always exciting Q3 session was improved further in the minutes before the session got underway, as increasingly strong rainfall ensured a slippery and unpredictable Q3 session ahead. Immediately, all 10 cars set out to set a banker lap in case the conditions worsened, as they tip toed out. It wasn't long before the session was halted however, as rookie Kevin Magnussen went straight into the wall at Turn 1, as others ran wide to show how tricky the conditions were. The red flag was brought out to recover his car.

During the red flag period, the rain eased significantly, which ensured the track would quickly dry again once the session resumed. After the first runs of Q3 it was Valtteri Bottas who was on pole with a 1m24.259 lap in his Williams , although Sebastien Vettel soon snatched pole away on his second flying lap with a hugely impressive 1m24,415 lap.

Going into the final minutes of Q3 it was Rosberg who was sitting on pole with a 1m23,236 lap as the leading drivers set out for their final qualifying run. It soon became clear it was a fight between Sebastien Vettel and Rosberg, who eventually stole pole from Vettel with a 1m22.7 lap in the final seconds of Q3 to claim a crucial pole for his 2014 title campaign, from Vettel in a close 2nd.

Row 2 consists of Bottas in 3rd from Daniel Ricciardo in 4th for Red Bull. Row 3 will contain Fernando Alonso in 5th for Ferrari, Felipe Massa in 6th for Williams. Jenson Button starts 7th for McLaren, with Jean Eric Vergne in 8th, Nico Hulkenberg in 9th and finally Kevin Magnussen in 10th. 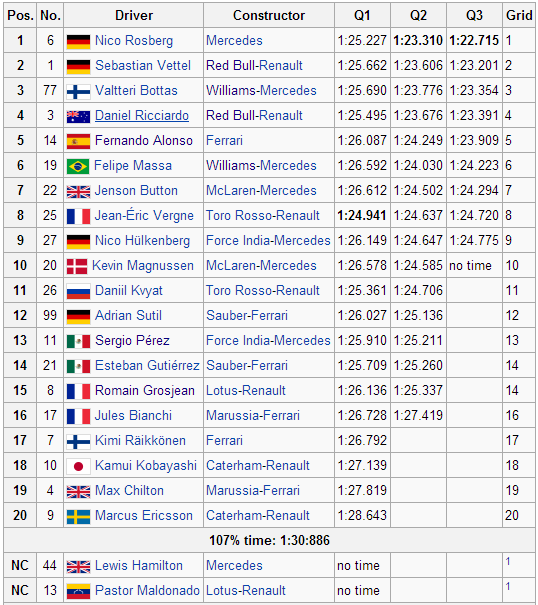 Super bad luck & another WTF moment (!!??) for Hamilton after all this races .. lot mechanical problem + much slower pit stop .. lets see whats the next problem he going to enjoy in the very next race.
Is all this really happen without purposely plan ?? No conspiracy ?? Why always me ??

I agree this is one perfect way to guarantee German win the driver championship & also secure the team championship too since Hamilton always manage to gain back alot of place even start from very behind.
Last edited: Jul 27, 2014

I can just see Kimi sitting in his Ferrari thinking - six places below me; Lewis and Pastor are out; two Caterhams and two Marussias - no problem there. I'll sit here and save my engine and tires. ... ... ... WTF!!!!!

Bad luck yet again for Lewis.
Hope he can get a few places tomorrow.
Jesus! Luca must have come unglued yesterday watching a Marussia bounce Kimi and Ferrari.
I'd hate to see the TV in his house.
You must log in or register to reply here.