My third review of 4k triple screen simracing with an RTX 3090. This review with rF2 is more in-depth than the ones for Raceroom and Assetto Corsa because it's not quite a case of "just crank the settings to maximum". 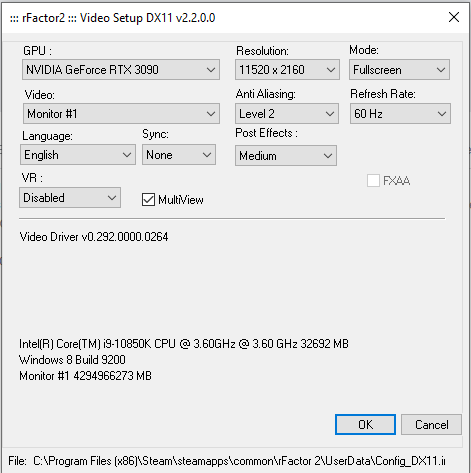 Results
Let's get rain performance out of the way: it's a serious failure in rF2. I'll be investigating further whether it's due to triple screens or resolution, but it just does not scale for me beyond 5 cars. While trying to find settings that work for rain, I used the lightest fps cars and changed graphic settings down to just short of "ugly" which provided base performance well in excess of 120 fps with a single car and by the time I added a 6th car, performance had plummeted below 60 fps. Conclusion is that rain will, sadly, not be a possibility.

Letting go of rain and looking at daytime performance, 42 AI at Nurburgring will be above 60 fps unless there's a huge pileup in the Mercedes arena. With GT3 at night, 42 AI is too much at Nurburgring (you can ride it out, but half the time is spent in the 50-60 fps range), and total cars needs to be knocked down to 20 and Sebring is about 30 cars. Le Mans performs better than Nurburgring, but not as well as Sebring. Night racing with 42 AI Stockcars had a low of 73 fps, with highs of 90+ fps.

Overall, except for the rain failure, I am pleased with the results. With a careful selection of cars/tracks, it's totally possible to increase the graphic settings, yet I'll probably leave them as-is to have the occasional large field... the sight of a long string of cars leading into the distance from the bottom of Dottinger Hohe is awesome!
Reactions: cofasix, Fucitol and EsxPaul