This thread is dedicated to sounds for the Pacenote plugin in general.

We will give some advice and support on customizing, creating and editing sounds.
W

For those about to create custom sounds.

The format of the sound files is:

Recording and post-processing should be done in the highest quality possible in a lossless format, e.g. WAV, 44100 Hz, 32-bit float, Mono.

Thanks
I don't know may I do something wrong but I edit RBR.ini pacenotes, but some of this saved, in next time when I ride on, some not...

You know about polish "WRSMP Codriver PRO"?, they make some simple program, but have one interesting function - is brake sound. May, it's possible realize in yours program too?
L

You can add a "Ave Maria" if you want, but i dont belive Workerbee want record it for you ....
Please read the help files and the informations inside ini files. All is possible, it must only record and definie at the ini files.

WRSMP Codriver PRO is a external tool and i think a workaround. "The Beast" is a professional plugin for RBR to support and expand original RBR functions. I think there is no reason to spend time for a moribund horse...

Lamda said:
You can add a "Ave Maria" if you want, but i dont belive Workerbee want record it for you ....
Please read the help files and the informations inside ini files. All is possible, it must only record and definie at the ini files.

WRSMP Codriver PRO is a external tool and i think a workaround. "The Beast" is a professional plugin for RBR to support and expand original RBR functions. I think there is no reason to spend time for a moribund horse...

May you don't understand what I mean...
But this program take information from game (when pushing brake or take hand brake) I mean, only to expand more function in this plugin. If you have driving camera editor, why not to take brake sound realization? ... For drivers, is good get, as possible, more information from car (as tyres noise, engine sound, road surface changing sound, force feed back for steering wheel and others...

You can't have a special braking sound with the Pacenote plugin from Workerbee Labs! Point.

It's not intended to tweak every sound in the game, but it's damn good for creating custom and personalized pacenotes.

The camera editor and the ability to halt or jump to any point during replay is a very nice addon feature and I love that. The latter is necessary to ease pacenote creation and editing but it's also great to make decent video footage and takes from replays.

You could try to use your workaround tool together with the pacenote plugin. Don't know if it will work, but don't blame "The Beast", it's likely that the other tool has been programmed quick'n'dirty...

As I say in main forum theme. Plugin and this program work together without any problem 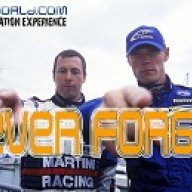 i recording, without problem sound with 8000 Hz mono 16, and i'm ever sure to max result

Basically the encoding does not matter, you could even use 44 kHZ, 32bit float, mono in RBR for your pacenotes.

RBR by itself is not consistent in this context:

Therefore the delivered english enhanced sounds have 11kHz to match the original ones to be able to do a mixture.

This is why we actually do recommend 11kHz, see above.

RBR has no issue here cause it was never designed to intermix english and german or whatever sounds.

As pacenotes consist solely of speech, even 8kHz is sufficient when it comes to actually play the sounds in RBR.

Of course, for recording and editing you should use the highest quality available (44 or 48) to have enough headroom for post-processing.

The main problem is to make the pacenote sounds loud enough to be audible appropriately during gameplay.
Reactions: Tonio Block

ok - my problem that in not strong with english and don't understand how make pacenotes pacage in my language,
And I chose another way - change all english pace notes (from original plugin) with my own ( try make all files with the same setup), and all will be good, except some close places where i get lag.

Well, maybe you have too much silence at the beginning and end of your sounds.
Try to trim them as far as possible.

Basically there is a natural limit on the amount of pacenotes you may place on the track to be played.
Usually the sounds are from 500 to 900 ms, so it is quite easy to calculate how many single notes you can place to be called at a certain speed.
Notice that you travel about 30 meters per second when going at 100 km/h.
So there is only room for about 3 to 5 notes to be called in 50 meters travelling distance.
Roughly.
Reactions: Tonio Block

Seems that I fix lag problem. Return for all my samples again and cut as possible all free sound spaces and used "Temp" edit tool. Try make, as possible, short sample lenght: from 30 up to 70 millisecond, by file (especially in own corners notes). And now, lag not feel, or it's much, much less and is not important for driving... Still not test with all track who have my own pacenotes

Sorry for my terrable english :-X

Experience gathered while preparing and processing two German co driver sound files has shown that, as Workerbee already said, it's necessary to cut away all silence from individual sound snippets. Don't be shy (I first was) cut like hell and as if you had a razor sharp sword...
We used a free VST plugin (Aradaz Maximizer) for loudness boost which made life a lot easier, if you're not a sound engineer. And remember: downsampling to 11kHz is one of the last sound processing steps.
The final encoding I used for the sound files was 11kHz sample rate, 32bit floating point sample encoding, ogg encoding with max. quality (mostly around 50kbps rate). This matches mostly the original english sound files and doesn't cause any problems or lags or whatever.
If you have a pretty clean recording (i.e. noise level not worse than say -60dB) this is my suggestion for basic sound processing for the plugin:
* use at least 44.1kHz, 32bit for sound processing to avoid clipping and quantization noise while performing maybe a lot of sound processing (depending on your source)
* optional: do some noice level reduction if necessary but pay attention to not introduce much artifacts
* cut out all the sound snippets and name them properly (use named markers and a sound tool that makes your life easier). Audacity should be fine, I used Adobe Audition
* optional: do some sound shaping / folding to kind of intercom sound if you like that; higher pitch voices are to be prefered over low bass voices
* cut off frequencies below 80Hz or more depending on pitch level of recorded voice
* cut off frequencies above 6000Hz, those won't contribute after downsampling to 11kHz in the last step
* normalize all snippets to 0dB or -0.1dB
* boost overall RMS loudness of snippets to somewhere above -5...-3dB RMS(!) or higher if possible (quite some compression needed to achieve this, but otherwise you won't be happy with the loudness of the pacenote calls compared to the other sounds generated by the game)
The above mentioned plugin helped a lot and was very easy to configure for this task. The VST plugin needs stereo input, so converting to stereo before and mono after is a necessary intermediate step. All decent sound tools support batch processing.
* depending on the pitch level of the recorded voice it might be necessary to cut again low and high frequencies after the loudness boost
* downsample to 11kHz, 32bit floating point encoding and convert to ogg file format with some proper tool that can deal with such 32bit encoded source!

Place your generated ogg sound file in a properly named directory under
(RBR path)\Plugins\Pacenote\sounds\(language)\(gender)\(name)
and don't forget to setup your new speaker in the ...\Plugins\Pacenote\PaceNote.ini with a proper entry like
sounds=(your speaker's language)/(gender)/(name)
Fill the parts in () appropriatelly! 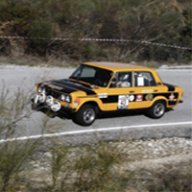 Hi, I also tried to change the pacenotes into my languaje using the english ones and overwritting them. The sounds are OK, I listened them perfectly but the problem is that it says the pacenotes very continuous and then silence for a lot of seconds, and again it says 5 pacenotes even more in 2 secs. and then a lot of silence. Of course, it doesn't say de pacenotes in the time it have to. I don't know why, because the .ogg files were recorded without silence (2 tenths to 0,8 secs.) so I don't know why it does that, I'm confused. I try changing the pause per pacenote in game, but nothing changes.

We already mentioned that you will get timing problems if the encoding is wrong.

Convert all your files and try again.

I used: "audacity" and don't have problem, except when word was to long, you must correct timing lenghts of new sounds (too long words by time value). And if you have too much pace notes in short road distance...
You must log in or register to reply here.
Share:
Facebook Twitter Reddit Pinterest Tumblr WhatsApp telegram Email Link
5 comments
F1 2020 | The Cars Of Michael Schumacher
0 comments
Esport Minute | A Round-Up Of Sim Racing Esports Action
0 comments
Drift 21 | Substantial Handling Update Improves Wheel Support + New Car
14 comments
KartKraft | New Update Adds Dynamic Sky And Lighting
32 comments
rFactor 2 | (Yet Another) New Build Is Here