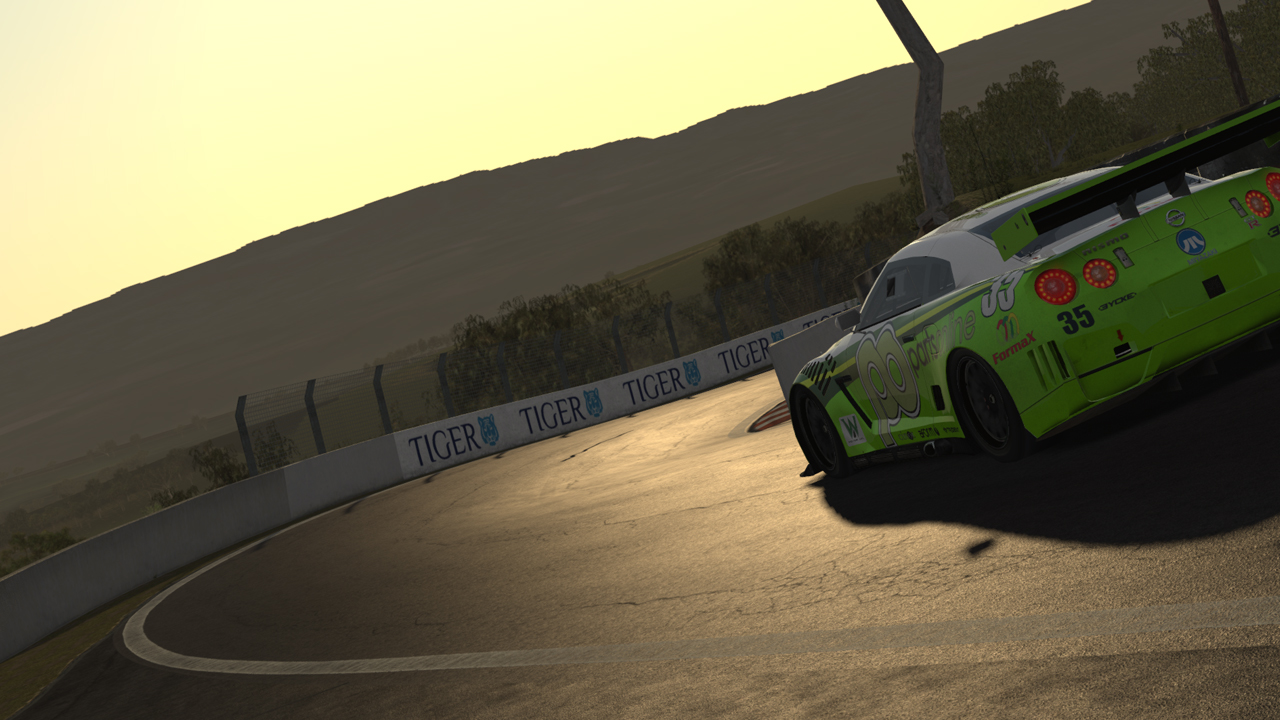 The Nissan Nismo GT-R GT1 is newly updated to v1.6! This update is primarily an update to bring the tire model (CPM – contact patch model) into this car, but there were a number of other tweaks and fixes done on what is actually quite an old base model. Improved shaders should help the car look a little more comparable with other recently updated content, but the vast majority of changes will be in the driving experience; our testers really enjoyed this one…

In GT racing, GT1 class cars are obviously the fastest available non-prototype cars, with carbon brakes, high downforce and plenty of power, they lap much quicker than the other GT categories. For many it is the ideal balance of raw speed and drive-ability.

Capable of producing 2200lbs of downforce at top-speed, the car weighs just under 3000lbs and develops up to 600hp (447kW) and 480lb-ft (650Nm) of torque from it’s 5.6L V8 engine. Shifting is handled by a Ricardo six-speed and a 5.5″ carbon-fiber triple plate clutch. Brakes are carbon-ceramic discs with six-piston calipers.

Designed to compete in the FIA GT Championship, the Nissan Nismo GT-R GT1 (R35) is based on the GT-R road car. First competing in 2009 for an initial four outings, the car entered competition full-time in 2010.

Allied with JRM Racing (under the Sumo Power GT banner), the car went on to claim the 2011 drivers’ title and four outright race wins, before a change in regulations forced GT1 teams to switch category, racing the GT-R in GT3 configuration for 2012.

We ship with a single configuration Nissan Nismo GT-R GT1 based on the 2011 season.

We do not believe an easy setup is required for this car. The standard setup should be very drive-able.

Handling
With a reasonable amount of downforce (around 2200lbs at top speed), but still nothing compared to most open-wheel cars, the GT-R GT1 is a very stable machine that can be made unstable mainly due to driver input. Drive carefully out of the turns, especially in 1st, 2nd and 3rd gear, where wheelspin is common.

Shifting
The car has a sequential box, so you’re free to flat-to-the-floor up-shift. Peak power is near redline RPM, so short shift only to save fuel or when traction is low.

Acceleration
The GT-R has significant power, nearing the 600hp mark. A smooth approach to acceleration is therefore needed at lower speeds to minimize throttle-on oversteer, especially in 1st and 2nd gears. This becomes less of a problem in 3rd gear, where it becomes relatively easy to get the power down, and by the time you are in 4th you can more or less mash the throttle as downforce increases and torque delivery decreases. The car can still bite if you don’t treat it with respect, especially on a bumpy surface.

Braking
Carbon brakes do require a little bit of warm up time, they perform best around 400-700°C and offer excellent fade resistance, but it is best not to exceed 900°C frequently. As the car produces significant downforce, about 3/4 the weight of the car at top speed, you’ll find you can apply more brake pressure at higher speeds and have to reduce your braking force gradually as the speeds reduce. Locking an inside wheel is somewhat easy at low speed, move the bias rearward at lower speeds, and try to brake in a straight line.

Tire Management
With around 600hp, it is very easy to spin and overheat the tires. Manage throttle control carefully in 1st, 2nd and 3rd gear, short shifting if lacking grip. Locking an inside wheel under braking is very easy, you may need to move the bias rearward at lower speeds, and try to do most of your braking in a straight line. Front tires are 30/68-18, rear tires are 31/71-18. Optimum temperatures around 80-100°C.

This car is a awesome drive now. Can't wait to also take it round the mountain. Overwhelming amount of content for RF2 at the moment all of it decent quality.

Premium
Superb car to drive really rF2 gets better with every new release.
Interestingly: I have URD (DTM) T5 payware mod and added them to AI opponents at Estoril. At 100% strength had a blast driving Nissan versus Audi, Merc and Beemer.

I just tried my first race in the rain with RF2 and noticed there is no rain on the windshield and no wipers. Do any of the ISI cars have these features?

David Cordell said:
I just tried my first race in the rain with RF2 and noticed there is no rain on the windshield and no wipers. Do any of the ISI cars have these features?
Click to expand...

No I dont think so David.
Personally I prefer it without as in some "sims" rain sits there in big drops on the screen and whether at 30kph or at 250 kph it keeps looking like rain on the the roof of my mothers conservatory.
You must log in or register to reply here.
Share:
Facebook Twitter Reddit Pinterest Tumblr WhatsApp telegram Email Link
575
Thanos AMC-AASD15A 6axis Servo Motion Controller
72
Opinion | Real or Fantasy?
0
The Future of Product Promotion on RaceDepartment Forums
85
Assetto Corsa Competizione | More Bathurst Previews