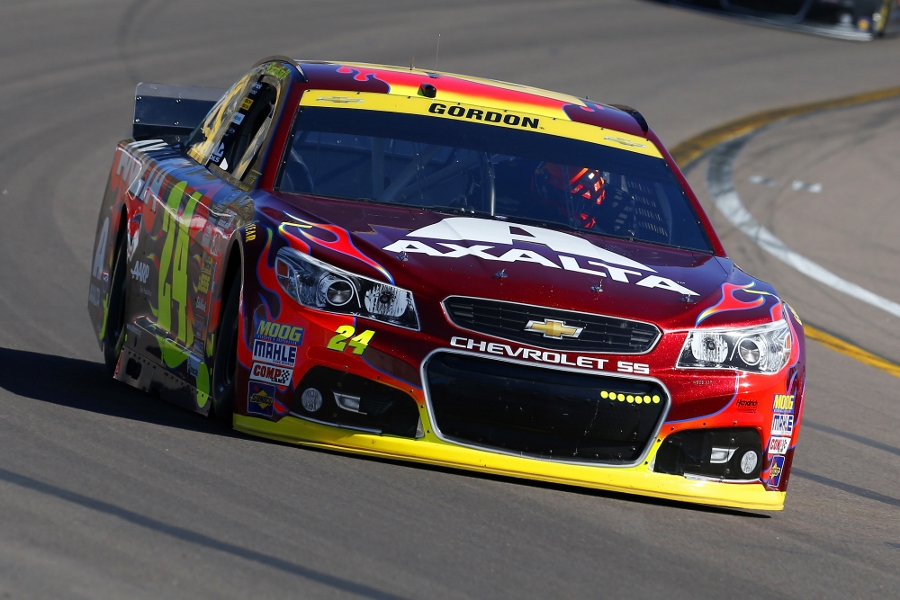 Four-time NASCAR Cup Series champion Jeff Gordon announced Thursday that the 2015 season, his twenty-third season in the Sprint Cup Series, will be his last as a full-time driver.

In a press release provided by Hendrick Motorsports, the team that has fielded his famous number 24 Chevrolet since 1992, Gordon struggled to avoid calling it a retirement - but the former champion's announcement is one that signifies the end of one of the greatest careers in auto racing.

"As a race car driver, much of what I've done throughout my life has been based on following my instincts and trying to make good decisions," Gordon said on Thursday. "I thought long and hard about my future this past year and during the offseason, and I've decided 2015 will be the last time I compete for a championship. I won't use the 'R-word' because I plan to stay extremely busy in the years ahead, and there's always the possibility I'll compete in selected events, although I currently have no plans to do that."

Gordon is the active leader in race victories with 92, behind only seven-time champion Richard Petty (200) and three-time champion David Pearson (105). He has recorded 77 pole positions, which includes a record streak of winning at least one pole position in all twenty-two seasons of his top-flight career dating back to 1993. In NASCAR's biggest races, Gordon has a stellar record. He has won the Daytona 500 three times, the Southern 500 at Darlington Raceway six times, and the Brickyard 400 at Indianapolis Motor Speedway five times - including the inaugural running in 1994, and he shares the all-time record for victories at "The Brickyard" in any series with Michael Schumacher. He claimed his very first Cup Series victory in 1994 at the Coca-Cola 600 at Charlotte Motor Speedway, a race he's won a total of three times. And he is also the current "iron man" of NASCAR, with the longest active consecutive starts streak of any driver - 761 starts, twenty-seven away from the all-time record held by Ricky Rudd (788 consecutive starts).

"I'll explore opportunities for the next phase of my career, but my primary focus now and throughout 2015 will be my performance in the No. 24 Chevrolet," said Gordon. "I'm going to pour everything I have into this season and look forward to the challenge of competing for one last championship."

Gordon finished sixth in the Cup Series championship last year, with four victories and a series-leading twenty-three top 10 finishes. He was eliminated from championship contention after the penultimate race of the season at Phoenix International Raceway, under the new elimination-style format of NASCAR's Chase for the Sprint Cup.

Hailing from a background in sprint car and speedcar/midget car racing, the 43-year-old Gordon's emergence into stock car racing was the catalyst of a massive shift in the sport, as NASCAR broke through from being a regional specialty of the southeastern United States, to a nationally-recognized sport and the most popular racing series in the country. An explosion of new fans from all corners of the United States followed in the years to come, along with the emergence of many top drivers hailing from the western states - like Gordon's home state of California, which was also the birthplace of his protege Jimmie Johnson, now a six-time Cup Series champion. Many other top drivers, including three-time Cup Series champion Tony Stewart, Hendrick teammate Kasey Kahne, and last year's top rookie driver, Kyle Larson, came from backgrounds in open-wheel racing just like Gordon.

With many nicknames such as "The Kid" and "The Rainbow Warrior" - in reference to his famous rainbow-themed DuPont livery used from 1993 to 2000 - Gordon has engaged in fierce and memorable rivalries with champion drivers such as Stewart, Rusty Wallace, Brad Keselowski, and perhaps his most famous rivalry with Dale Earnhardt early in his career.

Outside of NASCAR, Gordon also has experience in Formula One, having tested for BMW Williams F1 Team in 2003 during a televised exhibition event that also saw Juan Pablo Montoya drive a stock car for the first time. He has a podium finish in the Rolex 24 Hours at Daytona, finishing third overall in the 2007 race driving for Wayne Taylor Racing. Gordon is also a noted television personality, and a long-time philanthropist who has founded many charitable organizations in his name.

"There's simply no way to quantify Jeff's impact," team owner Rick Hendrick said. "He's one of the biggest sports stars of a generation, and his contributions to the success and growth of NASCAR are unsurpassed. There's been no better ambassador for stock car racing and no greater representation of what a champion should be. I will never be able to properly express the respect and admiration I have for Jeff and how meaningful our relationship is to me. I'm so grateful for everything he's done for our company and my family, and I look forward to many more years together as friends and business partners."

NASCAR CEO Brian France added on Thursday, "Jeff Gordon transcends NASCAR and will be celebrated as one of the greatest drivers to ever race. We have all enjoyed watching his legend grow for more than two decades, and will continue to do so during his final full-time season. His prolonged excellence and unmatched class continue to earn him the admiration of fans across the globe. Today's announcement is a bittersweet one. I'll miss his competitive fire on a weekly basis, but I am also happy for Jeff and his family as they start a new chapter. On behalf of the entire NASCAR family, I thank Jeff for his years of dedication and genuine love for this sport, and wish him the very best in his final season."

Jeff Gordon's pursuit of a fifth and final championship will begin on February 22nd with the fifty-seventh running of the Daytona 500.
Click to expand...

Good for Jeff.
He's had a good run and now it's time to do something else.

I wouldn't be surprised if he ran Le Mans at least once for Corvette Racing - which would be nothing short of really cool.

Gotta admit, this announcement yesterday makes me feel so, so old.

Glad to see Jeff going out on top. Hard to believe he's been around as long as he has.

Five years ago, I got into motorsport through NASCAR. For some reason, I was drawn to Jeff Gordon, he was the first driver in motorsport in general that I actually rooted for, it's sad to see him go, but I knew his days were numbered.

He chose the right time to go out ; he was still very competitive last year. Given his level of talent , it would have been fun to see him go from Sprint Cars to road racing early in his career.

Sir Jackie Stewart gave him a chance to test in either Formula 3 or Formula 3000 before he moved to the Cup series.

He was also heavily recruited by British American Racing during their formative years, ultimately Gordon declined the offer to jump because it was contingent on spending two years in CART with Team Green - not a bad gig, but too many steps to get there for a driver who may have been already prepared.

And there was also some rumours with Jaguar (due to DuPont).

Anyway, now I seriously need Dylan Kwansiewski to step up to the Cup for 2016, if not, I'm not sure what I'll do. I don't like the how they do the championship anymore, and JG is the only one that keeps me tied to NASCAR at the moment. At least Cup-wise.

I'm going to miss him and I would be lying if I didn't say I cried when I saw him out of the Chase last year. I saw him winning it, and if he had, I think he would have left on that note. But like the rest of you, I don't believe his racing days are done in general, and I would love to see him use his talents in other places, and perhaps give Chase Elliott, a chance to move up and perhaps become the next generation version of him. NASCAR needs it because it won't be the same without Jeff. Godspeed Brother!

Ole Marius Myrvold said:
And there was also some rumours with Jaguar (due to DuPont).

Anyway, now I seriously need Dylan Kwansiewski to step up to the Cup for 2016, if not, I'm not sure what I'll do. I don't like the how they do the championship anymore, and JG is the only one that keeps me tied to NASCAR at the moment. At least Cup-wise.
Click to expand...

JGR has plenty of talent. Denny had a darn good shot, and Kyle is starting to grow in to his shoes. If they keep their cool, one or more of them may have a shot this year. I sure am interested to see what Carl Edwards can do with Toyota power!

Jeff has been a massive part of the NASCAR community. I bet when it comes time for him to depart at the Ford 400 this year, it will be like that day The King was in his last race - which was ironically Jeff's first race!
You must log in or register to reply here.