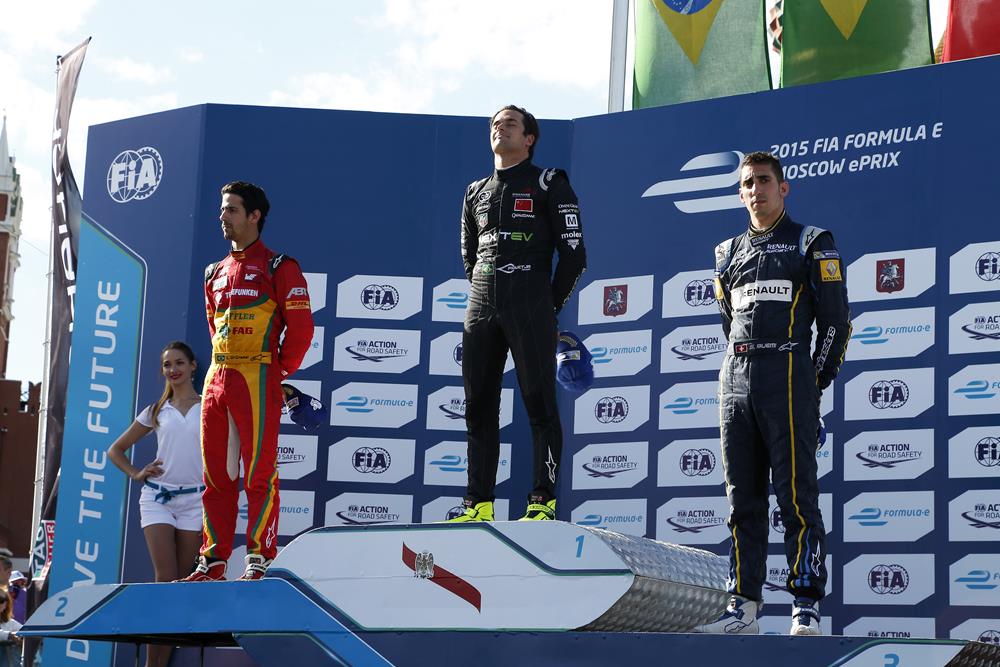 Although Jean-Éric Vergne revived Andretti Autosport’s recently flagging form by taking pole, Piquet Jr got a better start from 2nd and was never really troubled from there, the China Racing driver able to maintain a comfortable gap despite the increased power usage.

My prediction before the race was that di Grassi’s stunning Berlin pace would translate into some form of advantage in Moscow, but in hindsight the airport circuit was perhaps a more unique case than originally thought.

The Brazilian battled with an overheating battery and despite closing the gap in the second stint he couldn’t get ahead of Piquet Jr. But it was a solid result that ensures he remains in the hunt after the disappointment of his Berlin exclusion.

That, and it was his other championship rival’s turn to fall foul of the rules. Big points went begging for Buemi today after an inexplicable mistake by the e-Dams team regarding minimum pitstop times, keeping the Swiss stationary for ten seconds longer than necessary.

The subsequent unsafe release alongside Nick Heidfeld (Venturi) would later gain him a time penalty which dropped him to 9th. But that wasn't before the bizarre incident between him and Vergne. Buemi went straight through the chicane when battling the Frenchman to avoid a collision, yet both drivers slowed, apparently unable to decide who should concede the place.

Eventually Buemi pulled ahead and Heidfeld opportunistically snatched 4th from Vergne, which would become 3rd and his best result this season. Finally, some good fortune for the German!

But it means Buemi falls 23 points behind Piquet Jr and 6 behind di Grassi. If London was just another weekend, Piquet Jr’s 17-point advantage would look pretty secure. But with races around Battersea Park on both Saturday and Sunday, a maximum 60 points are still available for the drivers.

After a disastrous weekend for Sam Bird (Virgin Racing), plus mediocre races for Nicolas Prost (e-Dams) and Jerome d’Ambrosio (Dragon Racing), the three remain only mathematically in contention.

The track itself, while too tight to promote many daring overtakes, was undulating and flowing enough to make it entertaining to watch cars navigate. There was something thrilling about just how bumpy and patchy the Moscow road surface was, but it was also something you suspect no other major motorsport series would tolerate.

The cars practically bounced off the road when approaching the hairpins, and António Félix da Costa (Amlin Aguri) briefly went completely airborne in a much replayed moment. Maybe the less-than-ideal conditions speaks to how quickly everything was arranged, and I wonder if the FIA and/or the teams will ask for resurfacing work for future seasons, especially if the cars soon become quicker.

Organisers at least can’t be blamed for the shenanigans at the chicane, mostly involving Jarno Trulli (Trulli GP) simply bypassing the chicane whenever da Costa or Justin Wilson (Andretti Autosport) got alongside and refusing to give up the place afterwards. It was bizarre driving by the man who’d put himself on pole in only the last race.

Loïc Duval (Dragon Racing) taking off the Italian’s rear wing a few laps from the end didn’t work out brilliantly for either him or Wilson, but it was unfortunate karma for Trulli’s poor form, plus a five-place grid penalty for the first London race. Wilson, standing in for Scott Speed, still scored a point on his Formula E debut with 10th.

da Costa went on to finish just behind teammate Salvador Duran in 6th and 7th, scoring good points for Amlin Aguri after an unlucky Berlin. Antonio García conversely did little in his return with China Racing, and the lack of a strong teammate for Piquet Jr all season might be what ultimately costs Steven Lu’s squad in the teams’ championship compared to e-Dams and Audi Sport ABT.

Mahindra’s continuing point-less run remains baffling as Karun Chandhok and Bruno Senna only managed 12th and 16th. Maybe they, like Sam Bird, could do with some knowledgeable British support as Formula E heads to London, its tenth and final city, at the end of the month.

If Piquet Jr maintains his pace without making mistakes, di Grassi and Buemi face a huge battle to claw back the gap, even with Battersea Park hosting a double-header of races. The 29-year old fought back from poor qualifying in Berlin and after Moscow his confidence will only have grown. But will the electrified series spark off some final surprises?

What did you think of the race? Did you have a favourite moment? Where would you rank this circuit in relation to the others so far? Comment below!
You must log in or register to reply here.
Share:
Facebook Twitter Reddit Pinterest Tumblr WhatsApp telegram Email Link
20 comments
Sim Coaching Discount | Driver61 Sim Pure Pace Masterclass
29 comments
This Is Cool... New V10 R-League Esport Series
18 comments
RaceRoom | DTM 2020 Talk 'n' Drive
54 comments
rFactor 2 | 2020 Bentley Continental GT3 Arrives Wednesday