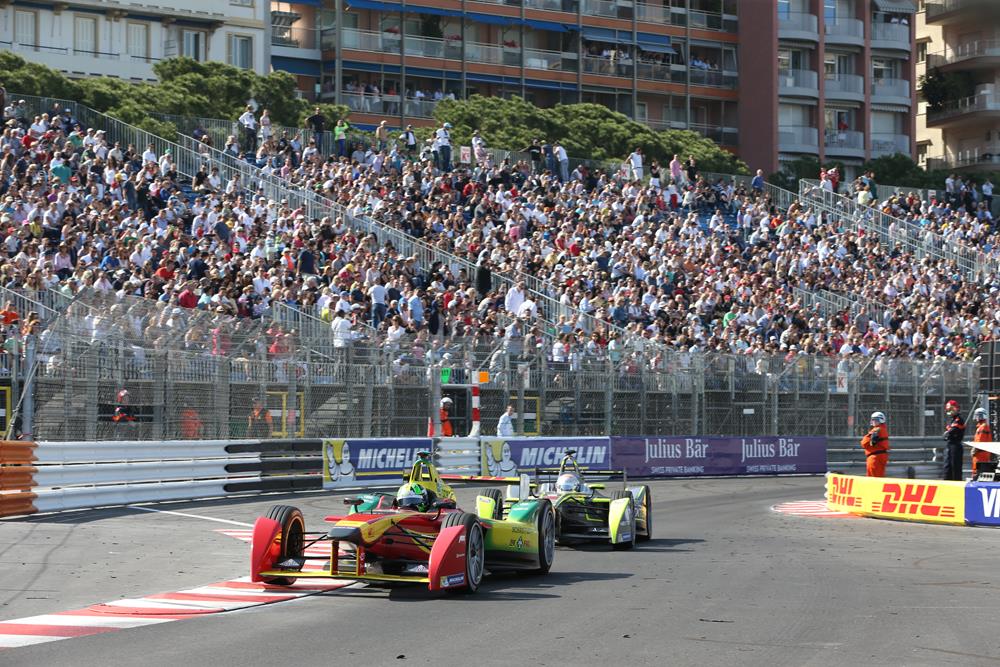 Following di Grassi’s (Audi Sport ABT) exclusion from the Berlin ePrix two weeks ago, the top three drivers are within ten points of each other. Piquet Jr is perhaps fortunate that a poor qualifying still became the points lead after the race but China Racing’s power management advantage combined with his recent form elsewhere puts him in a good position

The only worrying statistic for him is that both Buemi (e-Dams) and di Grassi finished ahead of him on track both in Berlin and Monaco. Buemi has probably been the most consistent of the three right now, winning Monaco and 2nd in Berlin, but di Grassi tweeted he was “back to kick Piquet and Buemi ass ON TRACK”, and perhaps like a certain Briton in Canada this weekend the Brazilian will hope to use his victim status following his setback to drive him forward. His run in Berlin was extremely convincing, and it’s unlikely that the front wing modifications his team later fell foul of contributed to his winning margin. He and teammate Daniel Abt are the only drivers currently confirmed for Formula E’s second season.

Compared to how early races in Punta del Este and London were mooted, it’s remarkable how quickly Moscow’s race came together, announced only in February in order to prop up the calendar after prospective cities Rome, Rio de Janeiro and Hong Kong all hit trouble. Holding the race in the heart of the city, running right next to Red Square and the Kremlin means preparations will have only just finished before Friday shakedown runs.

The 2.39km, 13-turn circuit is possibly the most undulating track on the calendar, and features a hairpin running up and down a bridge, very similar to Putrajaya’s layout, but the challenge continues as another hairpin takes the cars back down to the riverside road and the start/finish. What will be most interesting is how the field manages the second half of the circuit, which looks very tight and very bumpy, with lots of cracks and drain covers in the road surface.

Behind the main three, Jérôme d’Ambrosio, Sam Bird (Virgin Racing) and Nicolas Prost (e-Dams) are the outsiders. The first, the Belgian Dragon Racing driver, is the one with the most momentum after winning in Berlin. Prost and Bird, despite both having won this season, constantly middling results have slipped from immediate contention due to middling results in the past few races, and they need some big luck to turn that around.

One thing both Buemi and Prost can help secure is the teams’ championship. e-Dams sits 63 points clear of anyone else. Really, barring sudden misfortune for the French squad, it’s a battle for 2nd, with Dragon Racing’s 1st and 3rd in Berlin inching them past Audi Sport ABT, with China Racing and Virgin Racing close behind as well. Antonio García gets a second crack at Formula E alongside Piquet Jr after one race in Punta del Este.

Most surprising has been how Andretti Autosport have fallen away after several races of winning potential. As it is, Justin Wilson is yet another new driver hoping to change that, while Jean-Éric Vergne remains. Amlin Aguri were convinced big points eluded them in Berlin, whilst Trulli GP really made gains even if Trulli couldn’t convert his shock pole into a result. Venturi again had their best result of the season with Nick Heidfeld 5th and Stephane Sarrazin 6th. Mahindra were also oddly off the pace, but good results surely remain within their reach for the last three races with Bruno Senna and Karun Chandhok, even if frequent misfortune has kept them from fighting for the championship.

So it’s hard to call this latest race in the Formula E series; di Grassi’s out to bounce back, and based on how good he was in Berlin my money would be on him. But against the consistent Buemi and Piquet Jr’s team managing the power better than everyone else, crucial with early technology where battery power is so precious, means watching this latest encounter on another unique track is a must.

Qualifying is at 9am UTC this Saturday, which you can follow here on RaceDepartment through Formula E’s live online stream. It’s also available for the race at 1pm UTC. To watch ITV4’s coverage, the race programme from 1pm with the race starting at 2pm.

Watch a simulated onboard lap of the Moscow Street Circuit here.