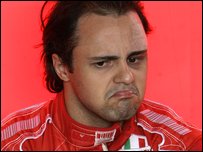 Ferrari have announced that Brazilian driver Felipe Massa will not return to Formula 1 action this season.

The 28-year-old is making good progress after fracturing his skull during the Hungary Grand Prix July and will drive an F2007 car in testing on Monday.

But Ferrari say they "want to proceed gradually" and do not intend to rush Massa back before he is ready.

"Talk of a proper return to Formula 1 can wait until the start of the 2010 season," the Ferrari statement added.

According to Ferrari, the outcome was "rather positive", prompting the decision to allow him to get behind the wheel of a privately-owned F2007 on Monday.

But they insist there is no chance of a comeback in 2009, with only two races of the campaign remaining.

"This is in no way a proper test session and looking at the stopwatch will not be on the agenda," said the Ferrari statement.

"There will be plenty of time for that in 2010, when, alongside Fernando Alonso, he will begin development work of the new single-seater.

"It is simply an opportunity for Felipe to renew his acquaintance with his natural environment, namely the race track."

Massa was knocked unconscious by a loose car part and injured the area around his left eye, prompting fears at the time that he could have suffered loss of vision.

Sad for Massa. Then who will driver the other Ferrari ? Fisichella :shock: !!

But to be honest this was expected already.
K