By contrast, the 2nd placed guy in the 'pro sim' category was using a Thrustmaster TS-PC with wooden wardrobes in the background.

Ann awful lot of expensive DD equipment was being used to match lap times that can be achieved on a gamepad.

No one needs that level of kit to compete, it's mostly the time in deliberate practise that counts.

Oh, deary me, the Formula e guys decided to play Forza Kart! Watch from1:12.30 ish for the action.

yes, back on topic, thx guys!

The Race 'All Star' event was generally good, especially the Pro racers and of course the Legends - seeing Petter Solberg drifting single-seaters with a huge smile on his face is something to behold. I met him once at Wales Rally GB and he really is that happy and upbeat.

I realise the irony in this on a racing site but the 'pro sim racers' racing leaves me totally cold. It was obvious they've learned to game the reverse grid situation already with 2 of the fastest guys abandoning qualifying laps so they were at the front for the reverse race which they won at a canter. They also show a picture in picture screen of the drivers racing (with the legends and real drivers this is great) but without any captions, I have no idea who they are - these are not well known or recognisable people and often the picture shown did not match the car on the screen. The sim racing action is by far the cleanest but it's also the most predictable but there was hardly a meaningful overtake as these guys clearly know each other and their limitations already. Much as I like playing racing games I just can't see pure sim racing ever being a sport I'd care about let alone capturing the imagination of the general public. They'll need to do a lot of work to make the racers a lot more personable to make viewers care.

Not an official series race, rather a quick test, but Martin Haven and I spent some time in commentary yesterday broadcasting the ACC club race here at RD - link below for those that would like to re watch:

Hi Paul, I watched some of the race and listened to you and Martin commentating last night, it was enjoyable to listen to, Martin certainly added a lot of detail about Zandvoort. For me, Martin is always associated with the annual Eurosport Le Mans coverage. I also watched the SRO race you commented alone and I think you did an incredible job keeping up with all the action, having Martin with you to bounce off and add a different perspective just adds to that.

My only other comment is that effectively both you and Martin were acting as commentators when most of the time we are used to a commentator and an expert/pundit pairing in most sports. My suggestion would be to maybe split the duties a little more clearly - one of you dedicated to the keeping up with the flowing commentary and the other adding more insight into the players, driving technique and elements of the game/rules (eg you did a great job explaining the 30-second fixed pit stops). You certainly worked well together, this did not sound like a first attempt.

Only my one opinion, of course. You're already on par with the other similar streams so keep up the good work!

Cheers Mark, appreciate the feedback buddy. Was very much a first try so certainly some bedding in and stuff still to be done - I don't like not being the lead comm

Was an exceptional experience (quite literally one of the best things I've ever, ever done). Will take that onboard for sure, and see what we can come up with on Saturday!

Paul Jeffrey said:
Not an official series race, rather a quick test, but Martin Haven and I spent some time in commentary yesterday broadcasting the ACC club race here at RD - link below for those that would like to re watch:

Sorry. Did give this one a go but for the first half of the race, every single race defining event was missed.

I understand that ACC must be severely limiting in its apparent inability to provide replays but the race direction didn't help.

I finally gave up when the guy who had been leading but pitted early for reasons unexplained possibly maybe took umans out during the 3 seconds when we cut away to a car on its own in the pitlane.

Maybe consider not streaming live, but making edited highlights available later when you've had the opportunity to edit in replays?

I haven't watched the SRO event from spa for the same reason.

ears said:
I haven't watched the SRO event from spa for the same reason.
Click to expand...

watched the first part and two significant positive changes can be noted: a) they now have replay! It takes about three laps, but we could see how the chap running in pos.2 - who was suddenly down in 10th or so - caught the curbs at the exit of eau rouge and went into the wall some laps earlier, so that was fine. b) John Watson finally has a good sound setup, so there he was, as weirdly great as ever! Pity, though, that the BoP extra weight gave the McLarens zero chance to compete and the Bentley's an uphill struggle, this should be finetuned in future.
E

Thanks @Eckhart von Glan great news! Something to watch tonight then!

With such massive grids now, in so many of the esports events, there is a heck of a lot that we're all going to miss - stories involving drivers that we're attached to, and want to see the continuation of.

In the last event of the first The Race season, Mike Epps narrowly missed out on a class title to Max Gunther. That was a story I really wanted to see continue, but Gunther didn't enter the second season and Epps was 'promoted' to the sim driver class, which dumped him into the middle of this field of cars and relative anonymity. 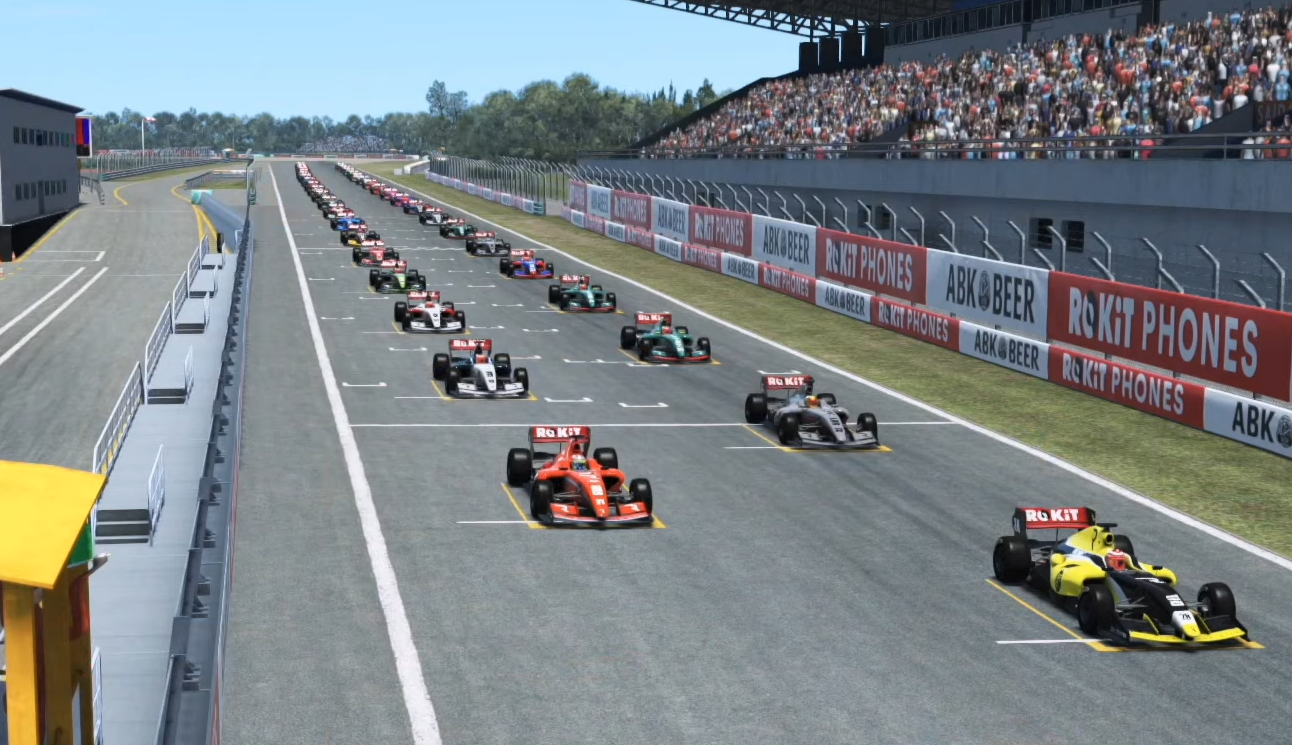 It was good to see him score a podium in the reverse grid race.

It can be a difficult job for a director to identify and predict when and where the race defining moments are going to play out, but there's more to a director's job than that.

In the RD race at Zandvoort, with action still close at the front, the director cut away to events in around 20th place, focussing on RD regular @Ricoow , Ricardo Umans. This is a good move - in a grid of mainly anonymous names, we could get behind someone we recognise.

And as luck would have it, a story started to play out. The number 10 Mercedes, driven by Emmanuel Soriano was starting to defend very aggressively and Umans and maybe another driver ended up in the gravel, with Soriano continuing. 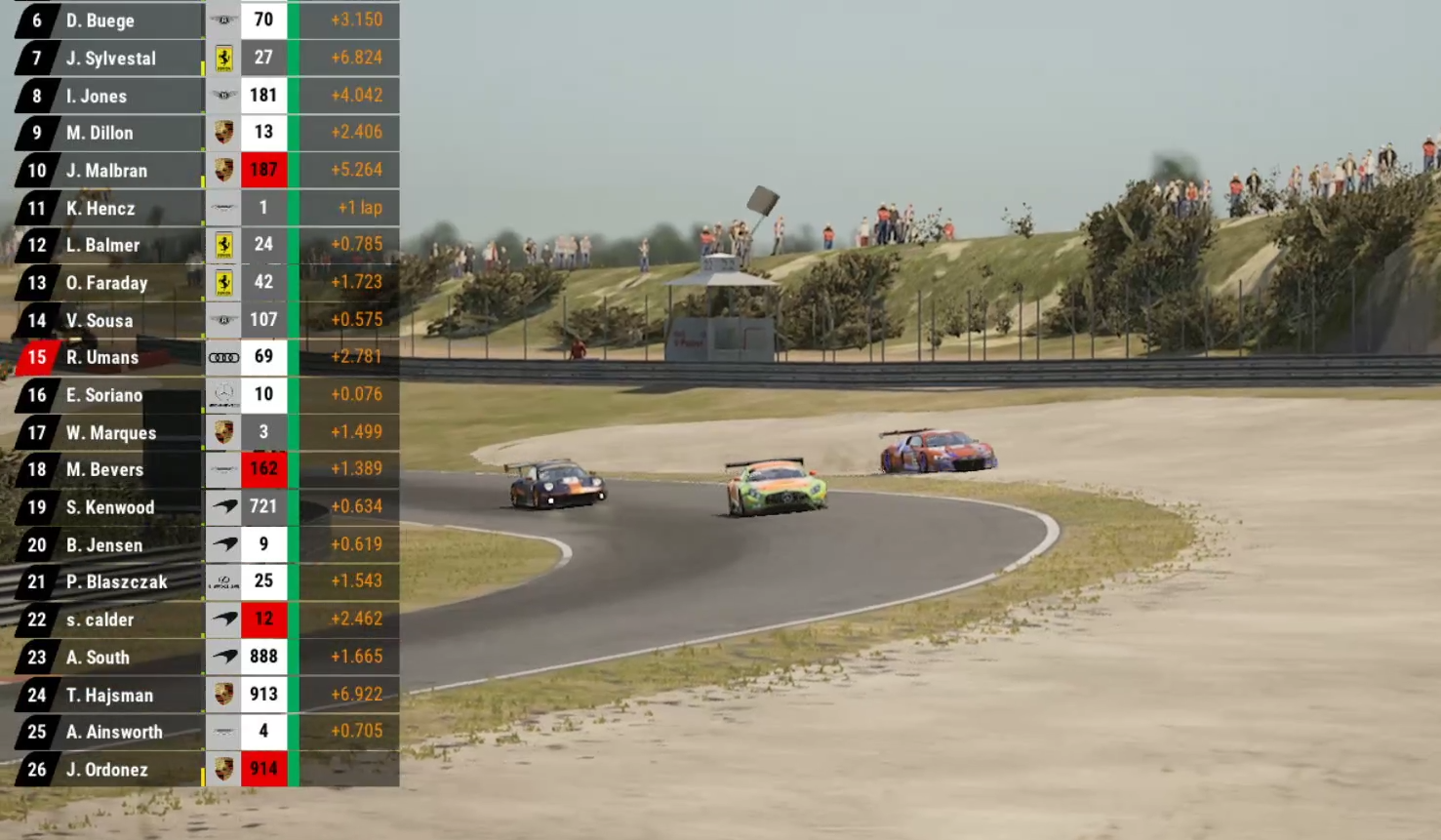 Now, critically, for me, what the director has to identify at this point, is we have a controversial incident. Something that can create a narrative for the race with events yet to play out. We have, possibly, a villian and a victim. In a narrative sense, at least. A hook. A story that viewers want to see unfold.

So the director needs to be aware of this, or be made aware. Let's see more of Soriano because he's likely to be in the thick of it. Let's see Umans and other affected drivers.

As it turned out, something did happen to Soriano - he ended up dropping back, but we only know this from the position tower. There was no focus on his car for the next few laps when his was the story we were interested in.

Something I associate Martin Haven's voice with more than anything else is the review style. I wonder if, once the race is over and all replays and editing tools are available, you could produce a magazine style review of the races. Not with as-live commentary, but with a scripted review.

That gives you opportunity to highlight all narratives and stories from the race and will create hooks and reasons to watch the next events live.

You could even include interviews with involved participants to hear their opinions.

I'm sure there ARE reasons, stories, controversies in there that WOULD engage me. But it's the responsibility of the broadcaster to make sure I'm able to see them.
Last edited: May 11, 2020

valid points. In the SRO broadcast, time and again, the poor chaps in the commentary box talk about "Is he going to make the move at the end of this straight?" only for the image to cut out and move to some random destination, where there is some action, but not the action we have just been led up to. Chaps on the mic then used the standings on the left of the screen to figure out whether a move had been made or not.
I used to do commentary on virtual races a dozen or so years ago and we had two chaps constantly scouring the field for "narrative" and then I'd hear on my earphones: "Eckhart, this is David, we have an interesting battle for position 15, Xose is taking the camera there in three .. two .. one ..." which gave me time to finish my sentence and anticipate a little what would be on the screen next, all while I was frantically moving my screen to pos 15 as well, lol. It was pure multitasking, and it probabaly didn't always work the way it should, but we somehow had a great time.
What we always did twice a race: rundown of the whole field from last to first, so everyone would get their airtime and viewers would get the wider picture, including all the gaps. Missing that even in real life shows.
E

Exactly. Part of the reason I started losing interest in the Zandvoort race, and the SRO Silverstone race, was that, after I'd missed the big events at the front and in the narratives that the director had been showing us, I started thinking 'I'm never actually going to see what happened there'.

Of course, even if replays are available, the risk of using them in such a hotly contensted race is that you miss live on-track action when showing a replay.

I really think that this magazine-type show both completes and creates the stories.

For a start it's not bound by time or sequence. You don't have to go through the race and stories lap by lap. You start with the winner, the championship winner. Something like 'and it was a great lights to flag win for xx up front to extend his championship lead' and that's it, unless there are stories there.

'But further down the grid there was controversy for yy and zz with a battle that lasted the length of the race'. Show the events, and feature opinions of those involved.

That creates the interest. And for the next race, you make sure your commentators and directors have seen that magazine show too. Because they are then on the same page as the live viewers. They are interested in a resumption of hostilities between yy and zz so the directors and commentators are ready for it, and the viewers connect as soon as we switch to it.

Be great to have something that people can watch before the first event kicks off at the weekend.

IMSA added another event before today's IMSA iRacing Pro Invitational Series.
The IMSA iRacing Challenge Series begins at 1900 UTC.
You must log in or register to reply here.