DRS: Time for a Change? 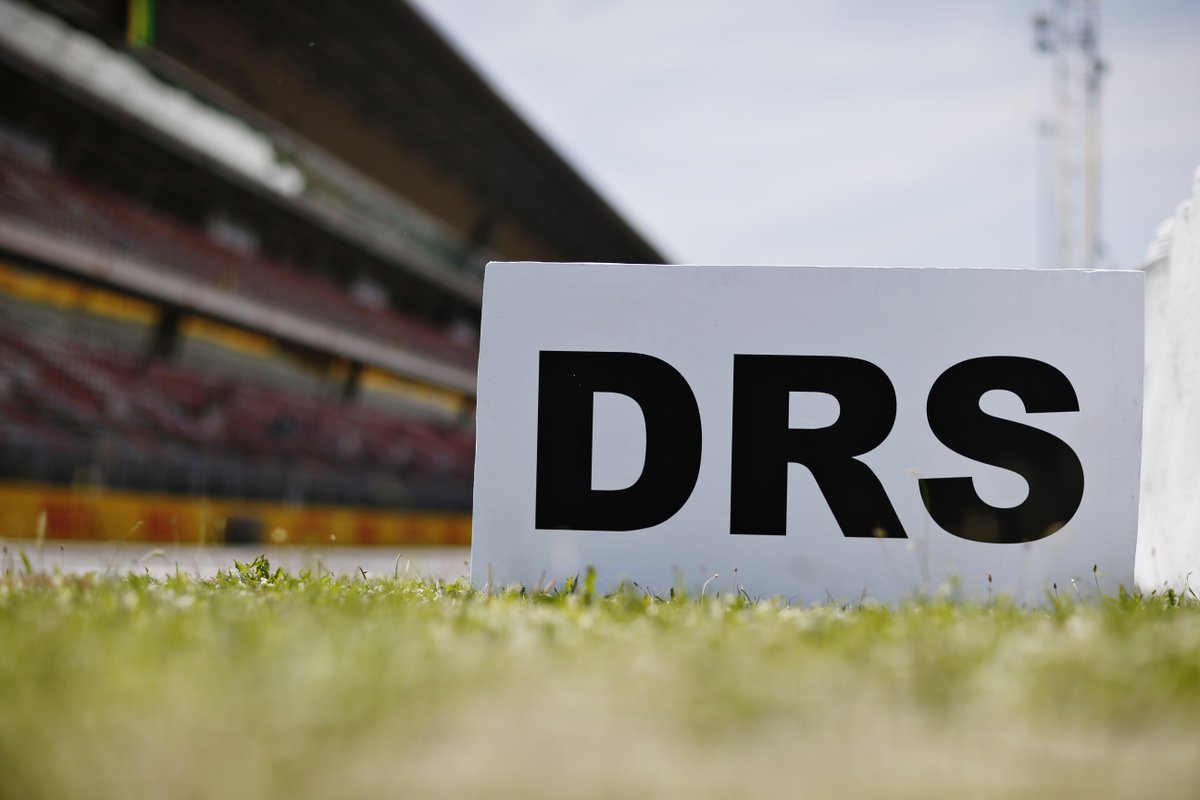 Lewis Hamilton made light work of the cars ahead during the Bahrain Grand Prix, leaving many to wonder if DRS really has gone too far in modern Formula One.

Starting from ninth on the grid it would be fair to expect a decent fight back through the field for Lewis Hamilton and Mercedes, however thanks to the Bahrain DRS zones the four time World Champion never really had to work too hard, often breezing past his rivals on the straight and making light work of the fight ahead.

Some feel DRS helps increase the overtaking excitement, while many others (myself included) feel it dilutes the racing challenge too much and makes the art of overtaking too easy - but where do you stand on the subject?

Is it time to drop DRS altogether and let the drivers fight on track? Should DRS zones or rules be amended to decrease the advantage, or are the rules fine as they are?

Let us know in the comments section below!


If you like your motorsport fast and open wheeled, check out the Formula One sub forum and get yourself in on the discussion today!

I think the breezing past other cars has not only to do with the DRS. I don't think the last minutes of the gp today wouldn't have been this exciting if not fr the ominent thread of the best driver in the world (Vettel) being overtaken from a guy in the wrong car

It's a matter of fact that the system as is makes the overakes pretty easy, but as long as they maintain this regulations about aero there are no other options than keep it otherwise there will be races with far less, if any, overtakes.

DRS isn't the only reason Hamilton breezed by. Battery deployment and engine mode makes a huge difference as well. That being said, it sounds like Bahrain extended the DRS zone by 100 meters, which did show to be a bit too long.

Would it be nice to deactivate DRS when the car goes in front of the next car?

Premium
This to me is the lowest of the low hanging fruit in terms of improving the experience - just get rid of it!

In F1, I think most of us want to see passing quality, not quantity. DRS passes are anti-climactic in the extreme!

Premium
After the really low amounts of passing in Melbourne F1 felt the need to do a knee jerk reaction and extend the drs by 100 meters. As a result the passes were incredibly easy and effortless and boring. Melbourne has always been difficult track to overtake but for some reason F1 felt it needed to do something, anything.

At very least the drs should turn off once the car catches up to the car ahead and pulls up on its side. As soon as the front wheels are next to each other the drs should turn off. I'd prefer if it was front wheels vs rear wheels but I dunno. Create a chance for overtake to happen. Not make it totally effortless. It is clear that F1 cars more about the number of overtakes than it cares about the quality of the overtakes so overpowered drs is going to stay, sadly.

Drs sucks. Just the chase of Hamilton versus Vettel in Melbourne was already more exciting than all the pass... position swaps that happened in Bahrain. Of course in Melbourne it was a bit too extreme and difficult to pass but it really went from one extreme to other in Melbourne and now in Bahrain when it was too easy and boring.
D

So now people are complaining about overtaking being too easy? There's just no pleasing F1 fans.

I didn't see LH's passes as easier than anyone else. He used a strategic move when the others were fighting each other. Do I wish DRS would go away? Sure.
A

Current F1 cars aerodynamic influence is so strong that without DRS there would be zero chance for overtaking of the cars of similar pace. So most of the race results would highly correlate to qualy ones, no need to spend time watching.
"Too easy overtaking" is not an argument because following the same logic the car been overtaken could easily return the position back using DRS in the next lap or even next straight.
So if we want remove DRS, we need to prohibit wings and return to 60s to BT20.

Yes.
Let's not make a Michael Bay movie out of nothing here.
He did. All other had pretty tough time with it.
And we just had a great race. Why "calling for rebellion" now then ?
Maybe, at the best we didn't really need those extra 100m.
M

Can we stop hating on F1? Last race had "no" overtakes and you guys complain, bthis race a overtaling fest and you say it is too much. Why in similarly paced cars it isn't so easy to overtake?

You guys should really start appreciating the sport

Nick Hill said:
If you want tons of passing, go watch NASCAR. And I don't say that with even an ounce of disparagement intended - NASCAR is awesome, tons of parity, tons of passin
Click to expand...

Don't forget Indycar. Alex Rossi made something like 55 on track passes last night in the Phoenix race. We will never see that in F1.

What about adding some ballast on the fastest cars, instead?
FIA could use some objective paramenters analyzing the whole race week-end of the previous race, to decide how much kilos they have to add to the cars.
This way there won't be anymore a world of difference between Mercedes/Ferrari and Toro Rosso/Haas for example.
Ballast also won't stop teams from improving their cars, but it would reduce the gap between cars.

If you have better ideas, considering F1 must remain the excellence of Motorsport, this one looks to me the only option to balance the performances of the cars without sacrificing the technological research on cars.
Last edited: Apr 9, 2018
T

Yes, ballast and only the slowest cars in the field get drs. Could that work? You have to,remove,the huge tech advantage of the top teams. But then you might have manufacturers bailing out due to cost with no way to capitalize with a dominant car.

Ballast is still another bandaid on the larger aero mess
C

If you want DRS gone then you must be a new f1 fan. Or an old one too. Either way congrats on riding a circle jerk.

I'm sorry but the thought of Lewis Hamilton making his way slowly through the slower guys doesn't entice me. I mean, that's if they don't pull over and let him pass since they'd already be going in with the mind set that they're NOT RACING him. Nor does watching a Formula 1 race with barely any overtakes at the front entice me either. It doesn't happen that much with DRS as it is. Can you imagine without.

In 2006 at Imola Alonso raced against Shumacher. If you can find that video you can see Alonso literally trapped behind a ferrari struggling with tire problems. "Letting drivers race" is not gonna work as well as you think it would in your head. The art of overtaking you're referring to must be undercut or overcut, because the majority of overtakes you're gonna see in an F1 without DRS is gonna be in the pits.
M

Diogo Goetz Brand said:
So now people are complaining about overtaking being too easy? There's just no pleasing F1 fans.
Click to expand...

Passing another car using DRS is not overtaking. It's just pushing a button and letting the engine do the work. Overtaking is when you outbrake your opponent in a corner.
M

DRS should never have been implemented in the first place. It's a gimmick.

Personally, I never felt that it was about the number of passes. It's about two drivers fighting for position. I remember Jarama, in 1982, when Villeneuve led 4 cars to the finish. There was no passing at all, but it was exciting anyway. On the opposite end of the question, Dijon 1979: Arnoux and Villeneuve were locked in a fantastic battle. There was no DRS. Just two drivers going at it.

Bottom line: great drivers don't need DRS. They find a way to pass. Or don't: doesn't matter. It's all about the fight between two drivers. Not about getting within a second of the car ahead and pushing a button. Seeing one driver overtake another using DRS on the pit straight at Monza doesn't interest me at all. There's no racecraft involved there. Hakkinen overtaking Schumacher at Spa using the outside line... Now, THAT'S racing.
M

rubaru said:
Don't forget Indycar. Alex Rossi made something like 55 on track passes last night in the Phoenix race. We will never see that in F1.
Click to expand...

I would watch NASCAR more often if the races were twice as short and were not interrupted constantly by bogus yellow flags to bunch up the field and run TV ads. Right now, I only bother to watch the last 30 minutes of Daytona and Talladega, Indianapolis and the road races. Even Bristol has got boring recently. Cut the 500 mile races to 250 miles, and maybe I'll watch more often.
You must log in or register to reply here.