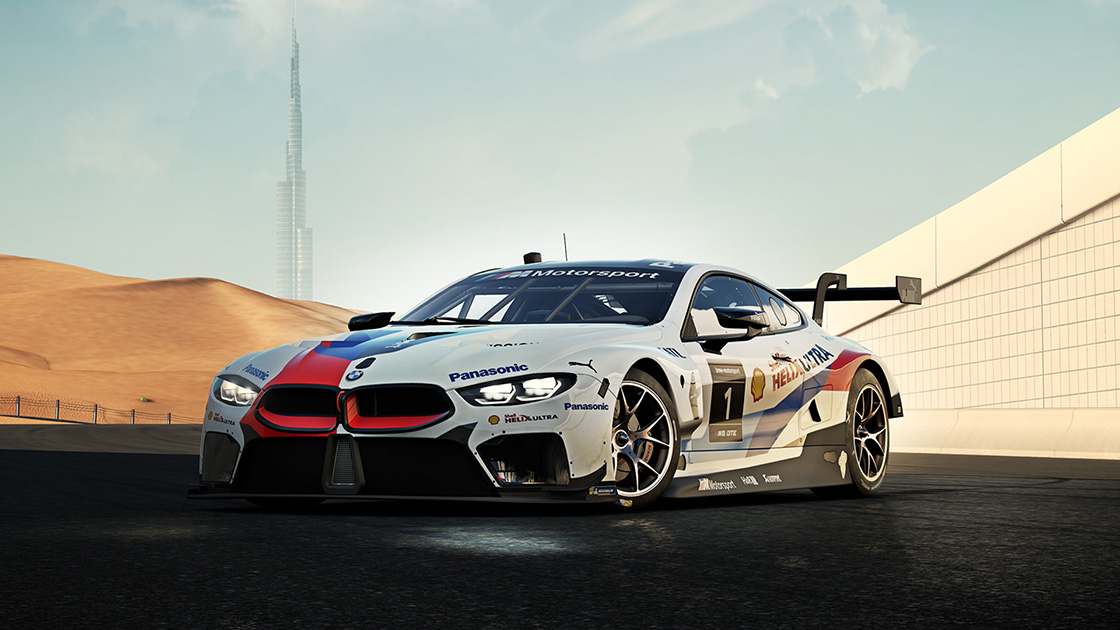 The Forza Motorsport 7 holiday season update arrives December 4th, and with it adds new content, improved force feedback and quite a bit more...

Turn 10 Studios and Forza Motorsport 7 have made a habit of late with recent monthly updates, and as we wave goodbye to 2018 the developers are not about to break that tradition now.. the new December update is scheduled to land on Xbox One and PC December 4th - adding plenty of fixes and improvements to the game as well as the very impressive BMW M8 GTE as the latest 'Spotlight' free car addition.

One of the most noticeable updates due to land tomorrow will be a brand new UI overhaul for the game, adding a fresh new look to Forza Motorsport 7 and improving the functionality and usability of what could sometimes be a bit of a cumbersome design...

Alongside the new update and BMW M8 GTE, Turn 10 also plan on making available some new events within the software, adding the 'Engaged Engines' league, new hopper races and of course a range of updated #forzathon races.. Plenty to keep players happy of the Christmas season.

Updated Force Feedback
The December update introduces some important changes to force feedback in Forza 7. The new force feedback is a full physically based system utilizing Forza Motorsport 7’s suspension kinematics and tire modeling to send tire loads to the steering wheel. It produces a more intuitive feel with more accurate align torque and a solid feeling of connection to the road.

Importantly for wheel users, this new wheel update completely replaces the old system, which means players’ tuning values from before December will be reset. Wheel users will need to tune from scratch to take advantage of this new and improved system. For a full rundown of the new force feedback system, check out the updated FM7 Wheel Guide on the Forza Support site.

A Fresh Coat of Paint
When you start up Forza Motorsport 7 after Tuesday’s update, straight away you’re going to notice some visual changes. In addition to a new splash screen, we’ve made some significant improvements to the main menu. The old slightly angled menu is replaced with a new flat layout. The car and driver have moved to the right-hand side of the screen. In addition, we’ve replaced the black and white image backgrounds for the menu tiles with beautiful new color images. Sharp-eyed players will also notice that we’ve changed the tile highlight color from red to blue, and we’ve changed the opacity of tiles that do not have artwork, to make those tiles feel more active. The team has also improved transition times for certain menu items; for example, it now takes less time to get to the Forza Driver’s Cup menu when selecting that tile from the main menu.

New Opponent Labels
The menus aren’t the only items getting a visual overhaul in December. This update also introduces a new opponent label system into the game. These labels are the information panels that you see in multiplayer lobbies, showing a player’s Gamertag, Forza driver level, and badge above the car. The new opponent label system brings a uniform, flattened look to these labels. Labels will also be dynamic, shifting between three “states” depending on an opponent’s proximity to the player.

The closest “full” state presents a player’s Gamertag, their position in the race, and some event-relevant information such as distance ahead (or behind, when looking backwards), total drift score, or “It” status when playing Tag games. At medium distance, opponent labels will be shown in condensed state, with just a player’s GT and position shown. A furthest distance, labels will appear in “far” state, showing just the player’s position in the race.

We’ve also made some design adjustments to in-race HUD information items with the December update. For example, the lap time HUD elements have been made more uniform and the lap counter has moved to the upper right corner of the screen.

The new menus and new opponent labels are part of an ongoing effort to offer players a great looking and informative Forza Motorsport 7 experience. Look for more updates to these aspects of the game in the coming months.

Other Updates
The December update is bringing more good stuff with it as well. Rivals players will now automatically get a new ghost car to challenge after they’ve beaten a Rival. In addition, Specialty Dealer will now display the original collector score alongside the updated collector score, as well as both original price and “sale” price, along with the discount percentage.

Sounds like it’s finally time to fire this game up again. See what this new FFB feels like.
Upvote 0 Downvote
C

does this game have fov and camera position options yet?
Upvote 0 Downvote

Can you buy the game on cdkeys, kinguin or g2a?
Upvote 0 Downvote

whip said:
does this game have fov and camera position options yet?
Click to expand...

Fixed camera options yes, cockpit, hood, bumper etc but NO FOV adjustability.
It desperately needs FOV adjustability I don't know why the don't give us the option, must be a FPS issue.
Nonetheless, it is a fun game and a pleasant change when you want to get away from chasing tenths off laptimes .
Upvote 0 Downvote

thanks for the answer, no fov options means no play for me i'm afraid
Upvote 0 Downvote

and still no race regulation update? I mean whats the point racing online if people keep cutting and winning... ACC then for me.
Upvote 0 Downvote

whip said:
does this game have fov and camera position options yet?
Click to expand...

Yeah, its a bit baffling why they haven't addressed this all this time.
Upvote 0 Downvote

theravenousbeast said:
Yeah, its a bit baffling why they haven't addressed this all this time.
Click to expand...

Maybe they could address it at some point, since Forza Horizon 4 does have FOV and also brightness control. Two things sorely needed in Forza 7.
Upvote 0 Downvote

Jason Mullin said:
Fixed camera options yes, cockpit, hood, bumper etc but NO FOV adjustability.
It desperately needs FOV adjustability I don't know why the don't give us the option, must be a FPS issue.
Nonetheless, it is a fun game and a pleasant change when you want to get away from chasing tenths off laptimes .
Click to expand...

One thing I do to adjust FOV on my PC is to run it in a window. If you then adjust the aspect ratio of the window, you can get a wider (or narrower) FOV.
Upvote 0 Downvote

whip said:
thanks for the answer, no fov options means no play for me i'm afraid
Click to expand...

Run it in a window and you can adjust FOV by changing the window size (wider window = wider FOV). Works great for me, but I'm using a 49" 4k TV.
Upvote 0 Downvote

my question is will its frontal intake swallow every single other car on the road.....
Upvote 0 Downvote

kondor999 said:
One thing I do to adjust FOV on my PC is to run it in a window. If you then adjust the aspect ratio of the window, you can get a wider (or narrower) FOV.
Click to expand...

Very interesting I haven't tried this.
I have a 34" Ultrawide could be quite good!
Upvote 0 Downvote

RobertGracie said:
my question is will its frontal intake swallow every single other car on the road.....
Click to expand...

BMW are making those "kidneys" bigger every edition. Lately they bacame so large i find them out of proportion. Its a branding thing, it seems all car makers are enlarging their frontal logo's every car update.
Upvote 0 Downvote

Is it out yet? Haven't received any updates so far...
Upvote 0 Downvote

Hey Turn 10, since you're not capable of having VR support for Forza 7 either on the PC or the XB1X (not your fault on that one, but didn't MS say that the XB1X would be a VR-enabled console?), could you at least incorporate TrackIR support on the PC side?

Or at the very least acknowledge the outreach from NaturalPoint on their inquiries???

Quoted from a NaturalPoint Admin:
"Thank you for the feedback on this, we really appreciate it.
I believe we have already made attempts previously to contact Forza developers regarding TrackIR integration, but we have not heard back from them yet.
We will consider reaching out to them once more, but If you could also request the integration on their forum's or directly to them, it would be very helpful to make it actually happen."

These types of scenarios are becoming all too common, where game dev's ignore the requests from hardware dev's.

When hardware is properly supported it's a win-win for everyone involved, increased sales for BOTH dev's & more hardware flexibility/options for the consumer.
Upvote 0 Downvote

Vojko Music said:
Is it out yet? Haven't received any updates so far...
Click to expand...

Nope it’s not out yet on PC or Xbox, likely to be in the next hour according to the official forum.

I’m intrigued to try the updated FFB, there have been more than a few false dawns from FM4 onwards with similar claims for Forza FFB fixes.
Upvote 0 Downvote

Does it update automatically on PC?
Upvote 0 Downvote
You must log in or register to reply here.