"The Fun of Data and Strategy in Endurance Racing". Pitwall.live Makes You the Engineer. 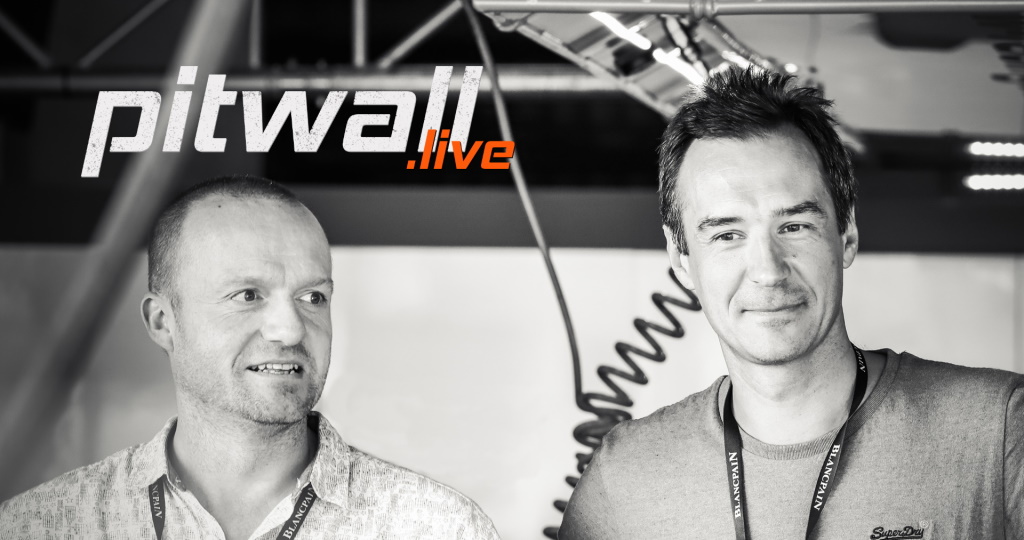 Timing is everything – a basic principle that is true for SimRacing as well. Staying up-to-date is often difficult with the internal tools sims provide, though, but there is a handier way – at least for Assetto Corsa Competizione: Pitwall.live offers extensive overviews for timing and data that make SimRacers’ lives easier, especially in endurance races.

A leaderboard with sector times, stint timers, an track map that refreshes positions automatically – a quick glance over the Pitwall dashboard feels like a race engineer’s workplace at an actual race track even in the free version. With the lite and pro versions, this impression goes even further thanks to additional features like average lap times per driver and stint.
There is a good reason for this: Pitwall is rooted in real motorsports. “ I was in the pits of a GT3 team in 2017 and saw engineers typing sector times into an Excel sheet”, remembers co-founder Toon Knapen (pictured right), who created the service together with Kris de Ridder (left). “I am an IT guy in automation and told them ‘you could automate that’. They just asked ‘can you?’.”

Two weeks later, Knapen was able to present a solution to the team – which immediately raised the question if even more was possible. “We started creating a tool, the predecessor of Pitwall”, explains Knapen. “For the 2019 24 Hours of Spa, we implemented a function with which the team could plan its pit stops taking full-course yellows into account. This is something I am very proud of.”

Until the Corona pandemic reached Europe in early 2020, real-life motorsport was the focus. The postponement of may race meetings at real tracks then brought sim racing to the table – Knapen had some experience as a driver. “For me, it started about ten years ago with Live for Speed. I have done a bit of Project Cars as well and have bought ACC when it was first released”, says Knapen, who does not get behind the wheel all too frequently these days: “Since we started working on Pitwall, I only drive to test features.”

The service is set for the integration of more features in the future. “I can not reveal too much yet, though”, says Knapen. His focus is going to be on real-life racing once again, “but we will absolutely still continue with sim racing”, ensures the Belgian. This means that the SimRacing service is going to profit from improvements made for real motorsport as well, making it even more interesting. Pitwall is compatible with the systems of live timing company Time Service, which are found at many race tracks around the world. “Theoretically, you can live time every event that uses Time Service”, says Knapen.

Additionally, there are plans to expand the Service to other sims as well. “We would like to do rFactor 2 and iRacing. Our user base keeps growing all the time”, says Knapen. Even the SRO, which organizes the GT World Challenge, used Pitwall for live timings of their Esports events in which teams competed for points for the real championship. “Pitwall is used in more than 150 countries”, Knapen is pleased to say.

The Pitwall co-founder also reckons that there is potential for a role that is rarely found in sim racing thus far: It is clear that SimRacing is essentially about driving, but engineers are an important part of the team as well – that holds true for virtual motorsports, too. “Many esports teams have driver-engineers, but not many have full-time engineers”, knows Knapen. “But racing is a chess game. A good driver does what their engineer tells them, because they got it all planned out.”

Hence, Pitwall is supposed to make the lives of sim racing engineers easier – which is also the reason why the free version has a vast amount of features already. Knapen: “We want to show people what they can get and bring them the fun of data and strategy in endurance racing.”

Visit Pitwall's website to find out how to get live timing for your league or event in ACC.
Reactions: domi2k5, David Mann, Botmeister and 3 others

Had the privilege of meeting Toon at SRExpo and the conversations were amazing. It's awesome to speak with someone who wants to see these tools become the norm for all simracing Communities to access and utilise.

When I was discussing pitwall.live with Toon at Expo it was awesome to hear that they have thought of it, or are already developing it.

This, alongside RaceControl by @LennyS, are to MUST HAVE tools for any Simracing Community owner, I recommend them to every owner I speak to when coming to Simracing.GP!
Last edited: Nov 27, 2021
An awesome tool for sure. We used it in our team swap event recently.
This sounds like a very intriguing idea. I have one question, does the use of Pitwall increase the load on the host server? Similar to dozens more spectators or co-drivers getting ready to change drivers?

davehenrie said:
This sounds like a very intriguing idea. I have one question, does the use of Pitwall increase the load on the host server? Similar to dozens more spectators or co-drivers getting ready to change drivers?
Click to expand...

I'm not a dev or anything so I can't be sure, but I expect the answer is yes, but only very slightly if done correctly. It has to pull the data down from the server to their own system, however they seem to have an option where only one person needs to connect to the live timing and they can then stream it to everyone else. But if you had lots of people all trying to connect their game to the Pitwall system independently, I can imagine that may have a more major impact.

(But I'm not an expert so I can't make any guarantees)

davehenrie said:
This sounds like a very intriguing idea. I have one question, does the use of Pitwall increase the load on the host server? Similar to dozens more spectators or co-drivers getting ready to change drivers?
Click to expand...

No, it doesn't. ACC does not allow to connect directly to the server, so we offer a free upload tool called Pitlink that connects to a client ACC session and uploads all data to our servers. Basically, 1 person in the race - in driver -or spectator mode - runs Pitlink on his/her pc, and all live-timing data is available on pitwall.live. In practice, that person is often someone from the league organisation, like a commentator or steward, but it can just as well be any driver.

(I'm Kris from pitwall.live btw)
Last edited: Nov 29, 2021
We use it in our community, in all our championships and endurace events, our drivers and participants love it. The teams use it in the race to monitor everything and see the rivals, stop strategies, times, laps etc ... Kris and Toon's work is very good.

From Hispano Simracing Thank you for giving us this tool.