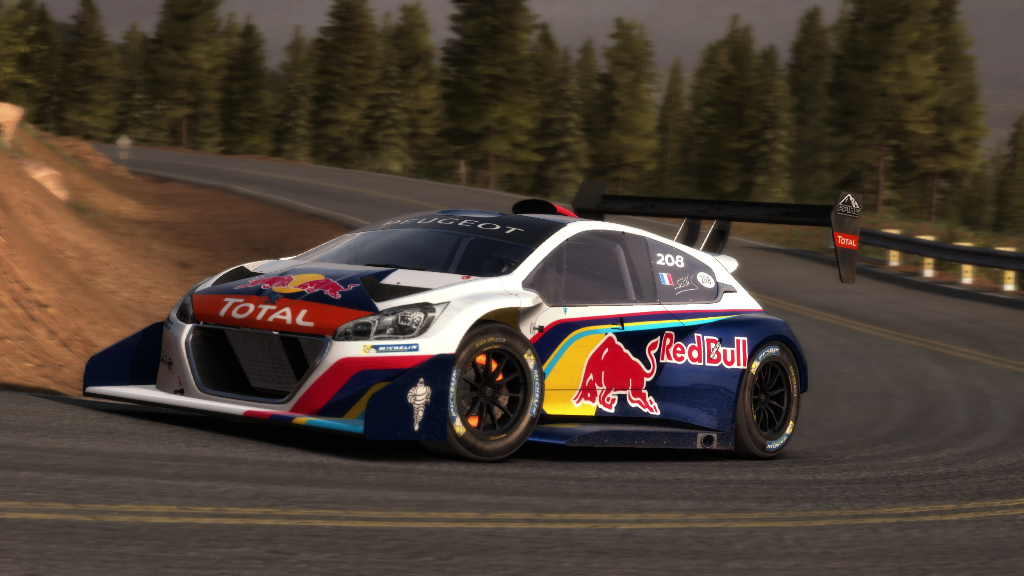 The Pikes Peak Hill Climb in the first DiRT Rally is one of the rare times the legendary course has appeared in a racing sim, and it was awesome.

There are certain legendary cars and tracks that are surprisingly hard to find in racing sims. The McLaren F1, 90's CART, and Indianapolis Motor Speedway to name a few. Mods can often save the day, but as official content some of the most well-loved vehicles and locations can be tough to own. Pikes Peak certainly belongs in that group.

Pikes Peak Hill Climb is the legendary ascent in Colorado dating back over 100 years that has challenged drivers to a 20 kilometer sprint to set the fastest time point-to-point while ascending over 1,400 meters. The course has been a mix of paved and gravel sections for most of its history, but since 2011 the entire course has been paved, which is the version included in DiRT Rally.

While it could be argued that, broadly speaking, DiRT Rally 2.0 does everything better than its predecessor, only the first DiRT Rally includes Pikes Peak.

The ascent undertaken with Pikes Peak is so great that the landscape undertakes a total transformation between the start and the finish. You begin the climb in the middle of a green, densely treed forest. The end of the course lands you in an environment more akin to Mars than the beautiful forest you left less than 15 minutes prior. 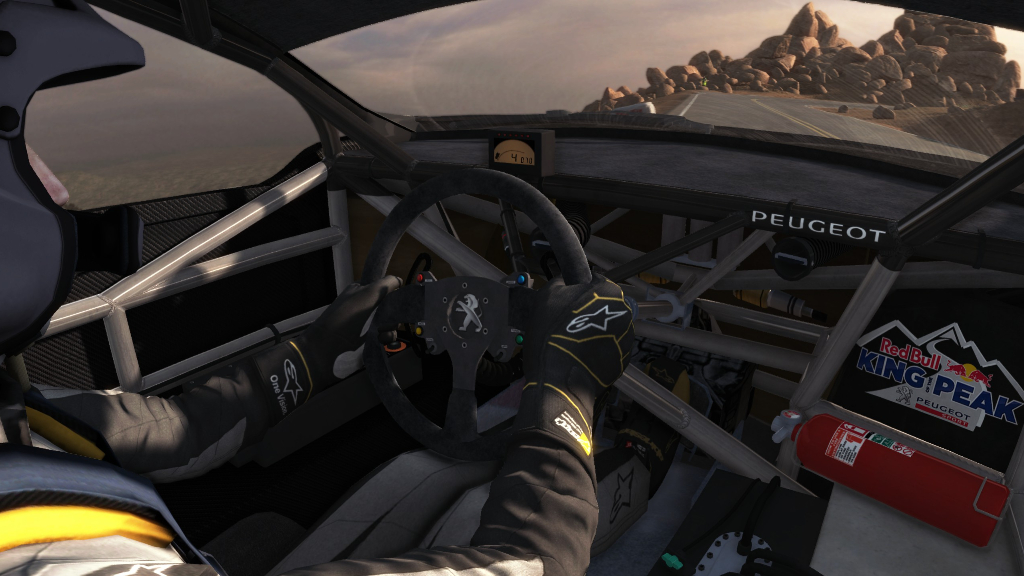 But admiring the impressive landscapes will be the last thing on your mind when taking on this course. The rapid ascent makes for many blind sections, including countless corner entries. Those undulations also hold the potential to upset the car's balance.

Aside from the elevation changes, the course itself can best be summarized as winding, and relative to the average speed it feels narrow. Another reason drivers get the feeling of being on a narrow course is the near constant threat of the vehicle falling off a cliff if the track limits aren't respected.

It's a very challenging, very rewarding experience to drive Pikes Peak, and thankfully we have it in DiRT Rally. If you've moved on to DR2.0, or are seeking a new challenge in sim racing, it might be worth buying or reinstalling the first DiRT Rally to take on Pikes Peak Hill Climb. An excellent, and unfortunately rare, experience in the world of sim racing.

If you've tried Pikes Peak Hill Climb in DiRT Rally, share your thoughts on the experience in the comments below.
Reactions: krasen1010, couri, Tchoukmandr7974 and 15 others
About author

I really enjoyed the Dirt Rally version. It's such an legendary hill climb.
A photogrammetry version of Pikes Peak for AC would be fantastic.
Last edited: Jan 9, 2022
Dirt Rally is not too bad, especially with non-tarmac and with more classic cars. It is actually pretty good sim with that content. I wish they had worked on tarmac physics more, and made more modern cars simulated in more subtle way as the older cars are in there. Also I wish FFB was a bit less DIY. Anyway I am sure Dirt Rally 1 was best that Codemasters did, it probably was the swansong of Codemasters.

Currently it is the only sim I use. There was Daily event not long ago with full gravel pikes peak with Audi, pretty fun I'd say. Audi perhaps just a little too planted and hard to rotate on throttle, but perhaps it is ok.
Last edited: Jan 9, 2022
Sébastien Loeb Rally EVO also had Pikes Peak, both in tarmac and classic dirt versions (1988).

It also has one of the more accurate takes of Wales' Great Orme stage.

It also has one of the more accurate takes of Wales' Great Orme stage.
Click to expand...

A great sim but a horrible game. What could have been...
It's just a shame that corporations like Polygon can buy exclusive rights. Worse still, they don't even provide an implementation of this fantastic route.
I wish Polyphony didn't sign an exclusive licence to the rights for Pikes Peak. It baffles me since they still haven't implemented it into their game. Will be exciting to see Pikes Peak in Gran Turismo but they seriously didn't need to sign an exclusive deal to it.

mantasisg said:
Currently it is the only sim I use. There was Daily event not long ago with full gravel pikes peak with Audi, pretty fun I'd say. Audi perhaps just a little too planted and hard to rotate on throttle, but perhaps it is ok.
Click to expand...

I imagine it should be planted and hard to rotate on throttle.
1. Its Audi = understeer
2. high rate of diff lock with no fancy center diff
I really have to try DR1, just for this. I have it installed, but never played it.

(bought it on sale at some point, but still haven't even gone through all the DR2 content.)

Shame they haven't included it in DR2. For me, it's like Nords for circuit racing sims. I'd love to have it in everything
Last edited: Jan 10, 2022
I’ll be honest, I tried it when I got DR and I had to check I was still playing the same game. It felt like the physics were totally different, and not in a good way either.

Same with rallyx, they felt very much like afterthoughts with very little attention paid compared to the main game.
Dirt Rally 1 surely has to go down as one of the most influential rally game releases ever. Not only did it set the foundations for Dirt 4, Dirt Rally 2.0, and WRC once Codemasters gets to use that licence, it also may have saved the lasting legacy of Codemasters, at a time when that legacy was being tainted by multiple poor releases in a short timeframe. I remember how much of a welcome surprise it was back in 2015, especially the part where Codemasters used early access to improve the game without allowing that period to drag on.

As for Pikes Peak, it's a lot of fun to drive on the rare occasions it shows up in a video game. Even the partial and inaccurate rendition in Gran Turismo 2 was a memorable experience. Aside from not being able to drive the regular rally cars on it (hence limiting your options to 4 cars), Dirt Rally's rendition of Pikes Peak was particularly good. I want to correct the article here and point out that you not only had the modern tarmac course, but the classic gravel and a mixed surface variant to choose from.

As a final note, excluding RBR mods, Dirt Rally 1 is also the best game to drive the 2011-'16 era WRC cars in. Codemasters couldn't use those cars in Dirt 4 or Rally 2.0 (hence why R5 is the top modern class in those), whilst the earlier WRC games weren't good. It's a shame, WRC 2 had a fantastic Road to the WRC mode but was let down by the driving physics.
You know what it is? Dirt Rally 1 breathes the passion from Paul, Christina & Team. These people have poured so much passion in this game. Along with the help of the community during the early acces, etc. If they could fix the moon-physics they could build on Dirt Rally 1 with good quality DLC. Like Raceroom or Automobilista.

However, Dirt 4 promised way too much, tried to cather both groups too much and failed to deliver. Dirt Rally 2, I don't even want to talk about. It was so broken at release I sold my T300 setup I bought for the game, after a 1.5 years of retirement.
I actually enjoyed more DR rather than DR 2.0

flykas said:
I imagine it should be planted and hard to rotate on throttle.
1. Its Audi = understeer
2. high rate of diff lock with no fancy center diff
Click to expand...

Agree. But still based on available footage they did go sideways pretty neatly.
Personally I found the Peugeot 405 to be more understeer prone than the Audi Quattro amongst the hillclimb vehicles. Though they were both rather sedate considering the power. I attribute it to a long wheelbase and big spoilers, as the Peugeot 205 would oversteer very easily by contrast.
Last edited: Jan 10, 2022
This 208 is a monster : just the most powerful car produced by Peugeot so far.
Specs are crazy : twice as much powerful as a Bugatti Veyron and even more powerful than f1 (well only till 240km/h which is the limited top speed) with 875hp for 875kg.
0-100km/h in 1.8 seconds
0-200km/h in 4.8 s
0-240km/h in 7s (most sport road cars need that time to reach 100km/h).
Pikes Peak is for Rally what the Nordschleife is for sport cars. I liked it in DR. I had to switch to DR2 - and did not regret it, btw, its a fantastic package and especially in VR - because with their last ever update for DR they ruined my VR in DR for me and for quite some others, and blessed it with micro-stutters from which it never cured again. I wished to have a Pikes Peak for any of the AC, RR, DR2 branch.
Last edited: Jan 10, 2022
Have to be honest, I enjoyed more the driving in the pikes peak mod for RF1 than in DR.
horrific tarmac and cars. very good if you traslate it in gravel with rally car.
Wish more games had a focus on hillclimbs as I really do love it whenever its included
I've spent many days of my life at the Pikes Peak hill climb and I gotta say that Codies did a good job of nailing a lot of the details. Even the porta-shitter just above the Sump/Ski Area. Good stuff
But the tarmac physics in the game make it not worth the bother, and the fact that you can only drive those horrendous Group B cars on the course is the nail in the coffin.

The best iteration I've seen to date is the most recent version for AC. Downsides being it's only the tarmac version, and it's in AC.

SLREvo and RBR is where I go to get my Pikes Peak fix when I need it. I took a stab at converting it to rF2, but those of you who have tried it know how that worked out