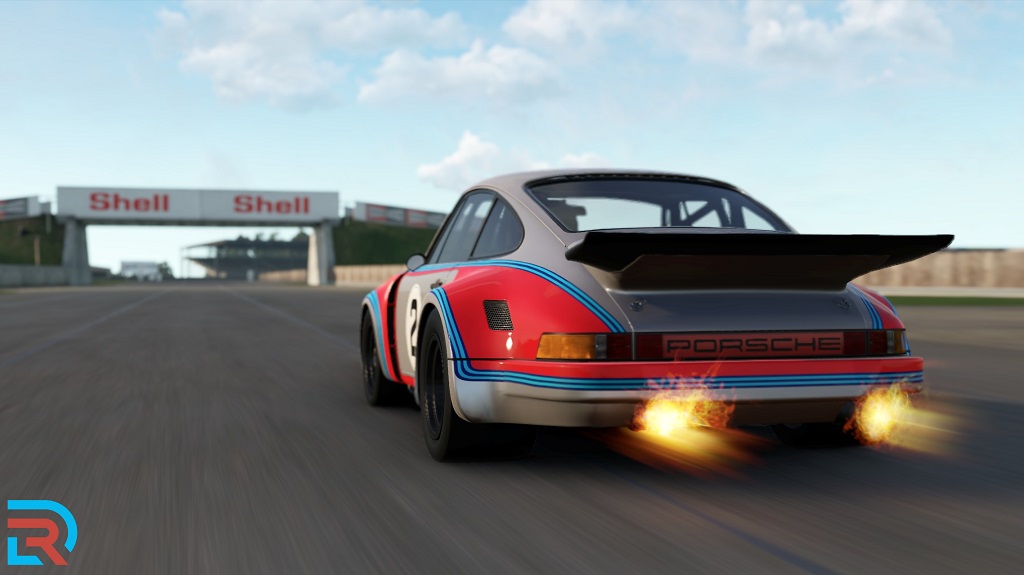 Reiza Studios today updated Automobilista 2 to version 1.2.2.0, and the sim has received new content and numerous bug fixes and improvements.

Automobilista 2’s busy update pace has slowed somewhat recently, with developer Reiza Studios opting for consistent monthly updates of late. For July 2021, Reiza has given brought us a classic and much-loved race car from the 1970’s, a new track, several new layouts to existing tracks, and some significant improvements to the title as detailed in the changelog below.

The new car is likely to steal the show here. The Porsche RSR 3.0 1974 has been added to the GT Classics Series in AMS2, and we have seen teaser images of a Corvette of the same vintage that should be added to the same category soon. The Porsche is a nearly five-decade old masterpiece of a vehicle, with its timeless Porsche design, aggressive engine note, and H-pattern shifting.

Reiza has carried over a track from Automobilista 1 in this update, adding the potentially punishing Salvador Street circuit to the title. Salvador is a tight and winding course, with high curbs through multiple turns and chicanes that threaten to launch you into a wall at any time.
Also on the track front, an alternate layout of Cascais has been added. Cascais, or

Estoril as it’s known to most of us, had previously included a tight and slow complex in AMS2, but the newly added layout skips by that complex with a sweeping right hander.

Other major additions include the ability to set up to six controller profiles, disabled collisions before the race start, onboard TC and ABS adjustment, and AI improvements for wet and dry weather.

The full list of changes is below. Let us know in the comments how you’re getting on with the content or any of the other updates.

For more discussions, questions and answers visit the Automobilista 2 forums
Reactions: Mark Lawton, GetSome, Turn 01 Warrior and 21 others
About author

Mike Smith is on it Good to see update
news early here.

Off to give this a go
Last edited: Jul 31, 2021
Downloading now, but delighted to see yet more improvements for game controllers. I know it's not anywhere near the full experience, but it's my daily 30 minute shot!

Thank you Reiza.
Last edited: Jul 31, 2021
Great update!!
My previous controller set up is gone, is this normal? It took me ages to get it right.
Finally, controller profiles and onboard TCS/ABS. It was painful binding new controls every time I've changed my steering wheel.
Won't recognize my CSL Elites. Recognizes wheel. Deleted the folder under Documents, went in to controls, clicked on reset, still won't recognize pedals.
Great update, but I'm still yearning for some QOL additions; mp replays (ability to watch or save anytime, better tv camera angles etc) a better server browser, ranking system... Just some thoughts from me.

daveclifton said:
My previous controller set up is gone, is this normal? It took me ages to get it right.
Click to expand...

I had this as well, fired it up and all my controller settings were gone....
Last edited: Jul 31, 2021
Porsche RSR 3.0 is awesome, a very welcome addition.
Salvador Street Circuit, why? It's so disappointingly short! I class these tracks as 'Why!?!' tracks. Is it just to repeatedly do the same couple of corners over and over? There's next to nothing to learn.
You see the word street and it conjures images of tight, twisty and frightening corners with a city scape as background. It should be brilliantly scary fun. This one isn't. Shame.

Love the Porsche though
Just found about the update here reading this, maybe I should wait to update if it's going to interfere with my settings.
Had to go to Edit Assignments to get AMS2 to recognize wheel. THEN I could go to the calibration procedure. That '74 Porsche is one crazy beast!
2.2gigs that is niiiiiiiice
74 Porsche, I loved that car!
Anyone else having control issues? It won't recognise my Fanatec V3 pedals.
Great update, as usual from Reiza. The Salvador track is really fun.

Also, they added seasonal artwork for my home track in Montreal. I tried a few laps with the date set at January 15. No snow on the track, but it was like driving on ice! (And there was a little snow on the ground...)
Ranked system please!!!!! Very good shob!!!!
The car I thought was coming, the 1974 Porsche RSR 3.0! This was a great mod
in AMS 1. Fantastic car, very lively.

And many many updates and fixes as usual. Great work by Reiza once again.
Of course, great game, but... The problem with AMS2 is the lack of online ratings. I did an online race in AMS2 on GT5 two hours ago with great pleasure, but it was sad that I got nothing for it. In R3E, PC2, ACC we have an official rating system, in AC1 online - just interesting (I mean public servers, not league etc.). Unfortunately AMS2 does not. And without this, the popularity of the simulator is small, no one is interested in driving with a dumb AI.
Last edited: Jul 31, 2021

daveclifton said:
My previous controller set up is gone, is this normal? It took me ages to get it right.
Click to expand...

yup same here. had to reconfig everything. No biggie though.

jamescarruthers said:
Anyone else having control issues? It won't recognise my Fanatec V3 pedals.
Click to expand...

i had to reassign the pedals on my V2. it basically started from scratch for me