Log in to download, or make sure to confirm your account via email
Overview Reviews (35) History Discussion
Modelling: moringaou, Jadonyx
Textures: Legende_TLM, moringaou, After_Midnight
Physics: CCX
Sounds: NeverKrash
Factory Test Driver: Nick Moxley
Instrument design: Fillipo94
Special thanks to: Nick Moxley, misterbeam, burrito, Avoletta and mclarenf1papa for their great help with improving the physics, the_meco for his assistance with the export of the model into AC and Modek for his assistance. 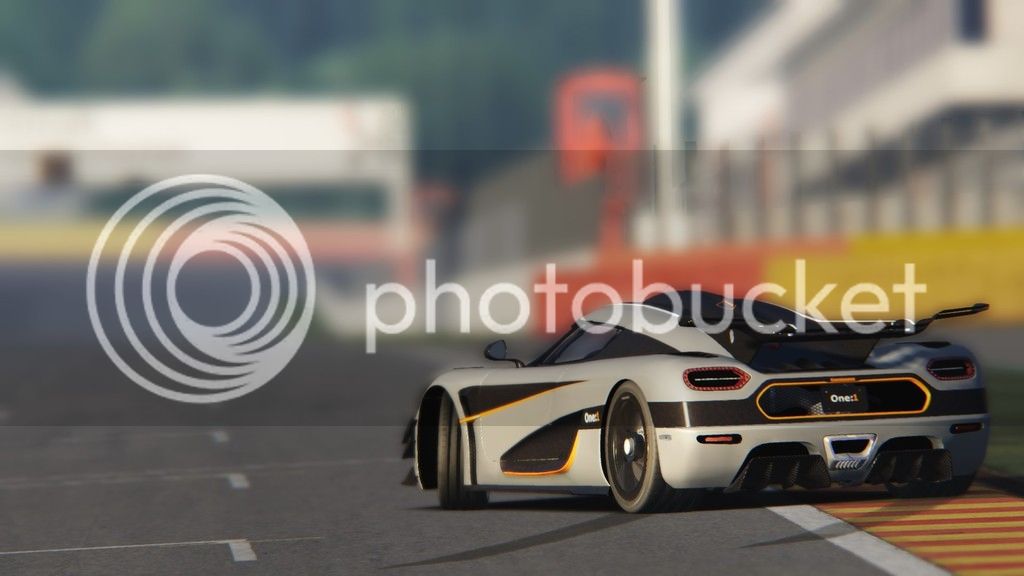 WORLD´S FIRST MEGACAR
Koenigsegg is creating six uniquely developed and designed production cars – the One:1 program.
This is one of the most exclusive production car programs ever envisaged.
The hp to kg curb weight ratio is an astonishing 1:1. This is the “dream” equation previously thought impossible. On top of this, the One:1 is the first homologated production car in the world with one Megawatt of power, thereby making it the world´s first series produced Megacar.
These are the reasons for naming the car One:1.

The 2014 One:1 truly raises the bar of performance. The One:1 features new and unique solutions to enhance track performance without compromising top speed or everyday usability, with a stunning visual appearance to go with it.

Koenigsegg was the first extreme car manufacturer to take steps toward green technology with the release of the biofuel CCXR in 2007. The One:1, a sibling of the highly competitive Agera R, follows in the footsteps of the CCXR as it also runs on E85 biofuel, race fuel or normal gasoline.

In order to give the One:1 maximum flexibility when it comes to power delivery, Koenigsegg has implemented its patented variable turbo geometry technology in the One:1 program. This technology gives improved response and more low-end torque than otherwise possible. As an example the One:1 engine has over 1000 Nm of torque between 3000 to 7500 rpm, which is truly unheard of.

I only give it 4 stars, it deserves 5, but when you change cameras, the sound goes away but it's pretty good
gooooooooooooooooooooooooooooooooood
The mod has no exterior sounds, the exhaust flame and smoke are not placed correctly and the interior is poorly made, textures are colliding with the others (things appear and disappear - most obvious within the dashboard, the stripe on the door and the "One:1" logo on the board).
amazing design and really fun to drive
Fun to drive. Great mod.
great
Amazing feel and sounds on the interior and hood, but for some reason 3rd person camera angles do not have any sound. For me, it is no problem since I am driving in the seat anyways, but weird none the less.
Gracias y gran trabajo ¡¡¡¡¡
wEF
Fun great job
very cool
It was once awesome but if you use assetto corsa car tuner you can give it more downforce etc. yourself to make it more like it was before !
It's sad to see the only good mod of powerhouses like this go. This thing was so much fun to drive when this was up to date
Any other version plz?
No engine sound using the external cam, very floaty at high speeds, extremely poor level of downforce, extreme understeer at all speeds. I don't know if this car has such terrible level of downforce and mechanical grip(worse than a 570s sports car) irl, but I don't think it does.

CCX
Updates have ruined the physics and they won't be updated I'm afraid as I no longer have the time/motivation.
Car looks great, but but it has way to little downforce, i couldnt get it to pull more than 1.1g, while in real life the One:1 can pull up to 2g sideways
escuse me no sound outside
No sound outside,great mode btw.
Assetto Corsa 1.4.3 Sound Fix ( latest after Oct 2016 Update)'
https://depositfiles.com/files/5h42020ek----

For modded cars
Really great addition to AC garage - the car looks and sounds great and it handles like you would expect from it. Top work!
10/10 Physics, 10/10 Sound and Nice model. Really looking forward to update. Can not imagine if physics and sound can bet better than that, but I know model is going to be improved.
Any news on update? BTW I love it, one of my favorite mod! Thanks!
Very good mod, but i don't like the turbo whistle... Can You please remove it? :) Because i've never heard that turbo whistle sound when they release the gas during the videos.
Hey there. Absolutley amazing mod. Always i accelerate 4th 5th 6th i get this grin on my face :D The acceleration is so impressive even in the Game. This car means a lot to me because it's the first Megacar in Assetto. I love this sheer power it develops.

What im here for is to ask you for a little Tyreupdate. As you use those from Kunos anyway what about a little update to Tyremodel 7? A lot has changed with those Model's. Grip, Temperature and Force Feedback. I'd love to see the new Model on this Car so i can enjoy it even more.