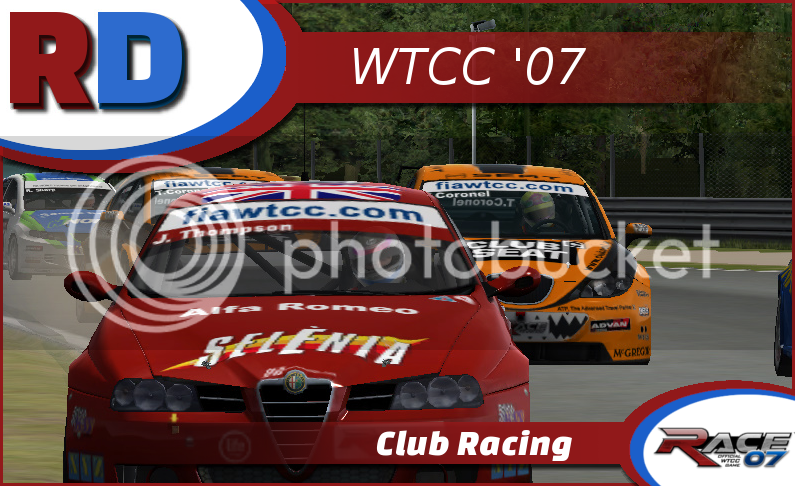 i will be racing pls 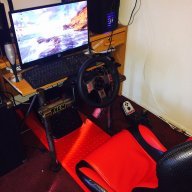 I'm up for this one.

Just to be sure.. practice starts at 8pm uk time (BST) right?

Which is good, because it gives you time to tune in to Motors TV 90 minutes before (18:25 BST) and watch some Race07 sim racing on actual telly. [/shameless plug]
Reactions: RaceProUK and Björn 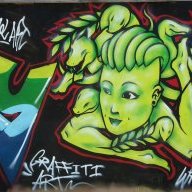 Some very nice racing on this tyre-eating track!

Got the basics (fuel, tyre pressure & brake bias) down yesterday and hopped in right for P2 - took me some time to get to speed, but finally found some and qualified 3rd.

I then absolutely botched the start and lost two positions to Alex and Joe, though that made for some nice fighting during the race - finally got back into P3, which would then become 2nd when Peter retired after what seemed like a lag-induced worsening of a slight touch while lapping John.

Had a better start into race #2 and while avoiding Aaron sliding across the straight, I couldn't exactly avoid getting bumped into in T2, hum. Recovered fairly quickly, though, and took on to hunt down John.
Another nice battle with Alex and Dennis, whom we were closing in on, followed and soon enough, I was back in P3, chasing after Joe. His tyres seemed to be considerably worse, allowing me to gain some time, and finally making the pass - another P2.

Thanks for racing, everyone - see you next time!
Reactions: Peter Ell, ajokay and Dennis Phelan

Qual:
A small mistake on the second half of the track... I think it was the reason for the 2nd position.

Race 1:
Good start, from the outer side of the 1st turn, it was a risk to try going for first place, so Aaron kept the lead.
We had the same lap times, good driving from both until one Aaron's mistake gives me the lead.
Again, the same laps times 'till the last turn of the track, where I found in front of me Grant... Too slow for me that moment, I'm sure that he didn't realise that I was behind him (and he was 1 lap back) and while trying not to hit on him, I got out of track...RACE FINISHED.

Race 2:
For the 3 or 4 first turns, you couldn't understand who was crashing with who. The result of these "bumper cars" was suspension problems for me and after a while, my car couldn't steer properly. RACE FINISHED.
Unfortunately, I lost another battle with Aaron, who was again a "breath" behind me. I think we were in P3 and P4.
I forgive whoever bumped me and I hope I'm forgiven from whoever I bumped.

Björn said:
Had a better start into race #2 and while avoiding Aaron sliding across the straight, I couldn't exactly avoid getting bumped into in T2, hum.
Click to expand...

I'd forgotten about that.
Any idea what happened Bjorn? Haven't seen the replay yet.

@Aaron Channer , Looks like Bjorn received a tap on the side from Peter that sent him to the gravel and on his arrival back on pavement he slid across the track and nailed you.

Oh what a week to return to racing! Zandvoort where the sands change the nature of the track to lumpy, bumpy and an STCC track, say isn't there a mod for karts available somewhere? Very difficult for me, sorry. I think I actually did get a good setup and a good drive but mediocrity and a tough track overcame me.

Lost the car in the last turn during quali so gave up the lap.

R1: I kept running into people and spinning off track, not good for placing.

R2: One by one the fast guys caught me. I spun but I don't think I ever hit anyone.

Tough track, hoping next week is better for me.
Reactions: Björn and Peter Ell

Dennis Phelan said:
@Aaron Channer , Looks like Bjorn received a tap on the side from Peter that sent him to the gravel and on his arrival back on pavement he slid across the track and nailed you.
Click to expand...

I have been collecting two (hums) from Bjorn the last two weeks.
Nothing on purpose... misperception and not good moments I think.
I hope Bjorn is not being a strict judge to me.
I already miss your likes.
Last edited: Apr 1, 2015
Reactions: Björn

Aaron Channer said:
I'd forgotten about that.
Any idea what happened Bjorn? Haven't seen the replay yet.
Click to expand...

As Dennis said, I got sliding on my re-entry, thus blocking your path a bit - sorry about that, but seems like you got me out of the way without too much hassle
As for the start, I think you and Damo got bit too close, IIRC. Another quick recovery it seemed, but it sure looked dramatic!


Peter Ell said:
I already have miss your likes.
Click to expand...

No worries Seems like I have unconsciously cut back on "likes" as most of the post-race-browsing was done from my mobile, and while that works fine, hitting those tiny icons sure is a challenge
Reactions: Peter Ell and Aaron Channer

That was fun. I'm guilty of having never raced most of the STCC circuits, and I'm the one losing out because usually they turn out to be a lot of fun. I never even realised this one was in the game until last night. I wasn't keen on it initially, but once I got a few laps under my belt and started getting faster and finding the line, it became more enjoyable.

A few setup changes that allowed me to brake late and throw the car around the corners (to the protest of my tyres!) got me into the 7's, and once just about into the 6's. I fluffed the last corner in qualifying though and started in the middle.

Good fun racing with Joe and Bjorn in race 1, swapping positions, making mistakes, regaining them again. Bjorn was looking after his tyres much better though and once he was past, he was off into the distance. I kept Joe behind me for 3rd.

Race 2 I got on the grass at the start trying to go round Damo and bumped him a bit. Found Bjorn with me again as we made our way towards the podium positions. Overtook John through turn 1, and the Dennis a couple of laps later with a proper touring car rubbing is racing overtake that would make even Jason Plato proud. Bjorn then got by when I braked too late into the hairpin. And on the final lap I was closing in on Joe as he made mistakes in the final 3 laps that allowed me to close a 7 second gap. Wasn't able to find a way to overtake and was 4th by 0.3 seconds.