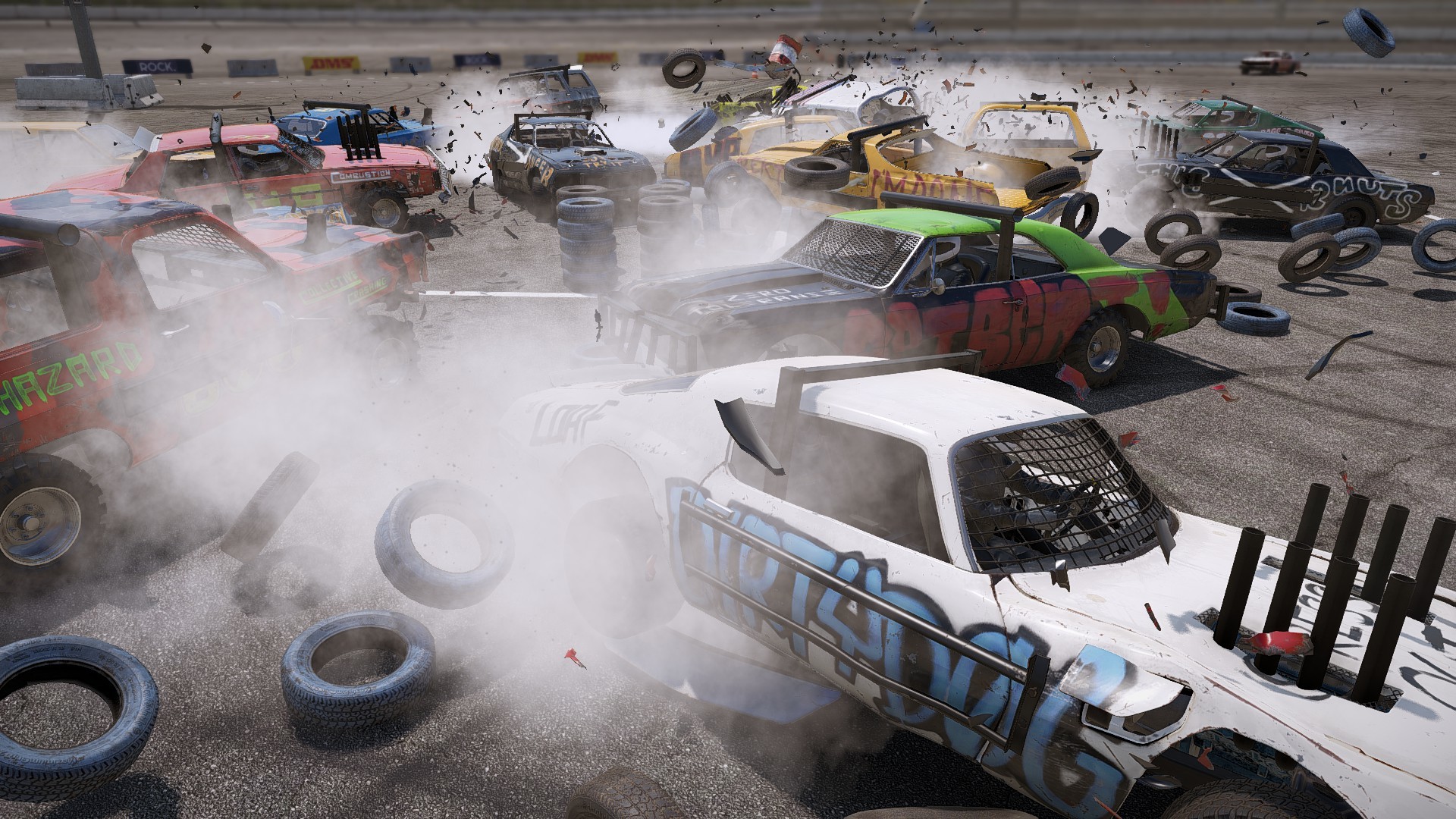 Exciting destruction derby style racing game Wreckest is getting some more variety in the next build...

Continuing to tease fans we news of goodies set to arrive in PC racing game Wreckfest, developers Bugbear entertainment have very recently let us into another juicy bit of improvement coming to the semi-simulation demolition derby style racing title - this time confirming that the next big build update is set to feature some pretty solid improvements in the AI car selection department - which should lead to a much more carried and hopefully entertaining offline racing experience.

Love Wreckfest? Why not try out our new Racing Club for online thrills? 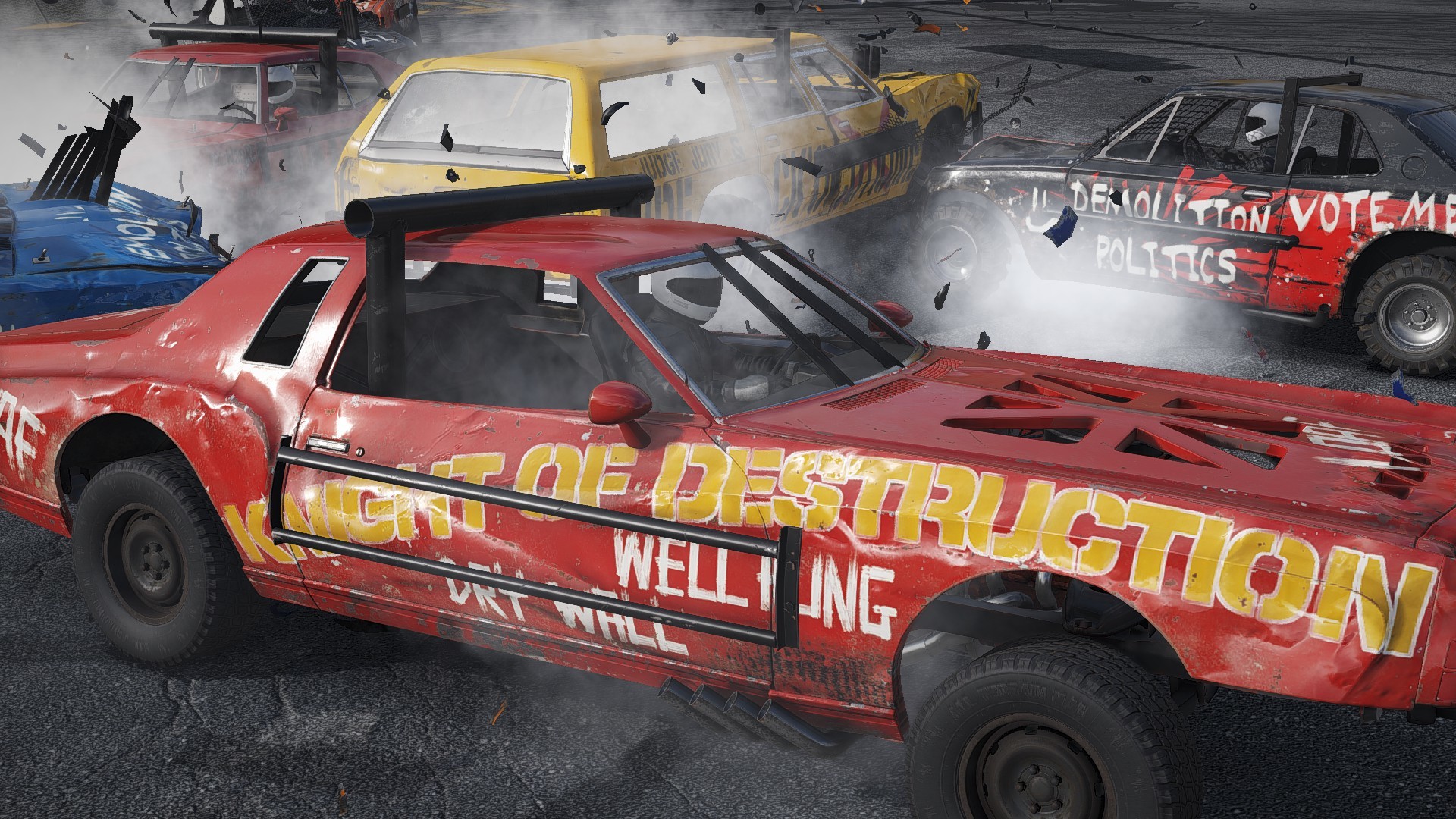 As well as this rather pleasing news, Bugbear also recently confirmed that a brand new vehicle class is set to appear in the none too distant future... Motorhomes! Yes, no true banger racing game is completed without the inclusion of RV racing.. and praise be it comes to Wreckfest soon! Check out the details here.

Right, that's enough of that. I'll leave you with some images, and the full release from Bugbear below:


If you've ever played the game for more than a few minutes, you would have been hard-pressed not to notice that the computer-controller AI Players mostly use the same cars with the same paint job and upgrades (more like no upgrades, to be honest), no matter what the performance class or whether you're playing racing or demolition derby. Looking at the same cars all over again makes all the different events feel generic and it's definitely something that many of you have been hoping that we could improve at some point, but why is it like that anyway?

Well, it's not because we were simply slacking off – creating paint jobs and configuring vehicle assemblies, not to mention setting them up for the career events, takes a considerable amount of time, and we were quite simply running out of it back when the game was being released on PC. Rest assured, we were not happy about it and thought it was definitely something that we wanted to improve later down the road. Releasing the game on consoles has given us time to improve many aspects of the game, and we're happy to let you know that this is one of them!

So yes, first of all we have created many more paint jobs for the AI cars. What that means is that now the chances of seeing two or more cars share the same paint job in one event is much smaller. The game is also clever enough to pick correct AI Players based on the event, so for example banger racing and folk racing themed events during the career will feature AI Players racing with banger racing styled cars whereas demolition derby events will put you against mean looking demo cars. This is actually true for car models as well, meaning that the AI Players will only use car models that fit the theme of the event – so for example in a folk-racing event they only use the type of cars that are used for real-world folk-racing as well, giving the game an extra immersive touch.

We also went the extra mile to make sure AI cars now sport appropriate derby upgrades like heavy bumpers and side protectors, making the derby events not only much more exciting but also challenging, since the AI Players are no longer driving around in boring bone stock cars. And actually, the higher the AI Player class is, the higher the chance of them using spoilers and other racing-oriented goodies in the racing events, upping the ante and giving a better show.

Thanks to these improvements, the game now feels more varied as well as immersive especially in regards to its career mode. And talking about the career: who knows, you might even receive an awesome paint reward or two from some of the special events for bragging rights!​ 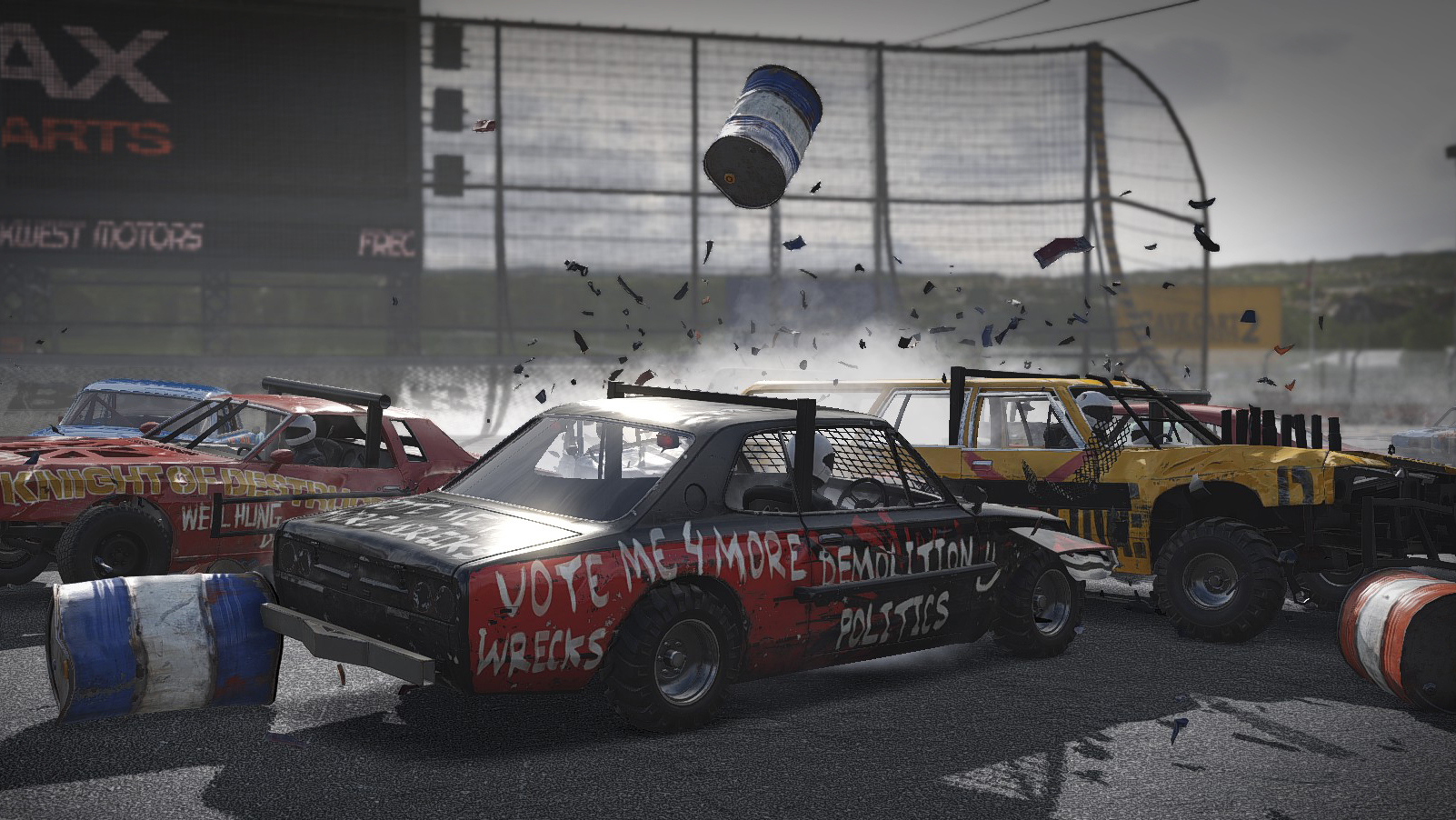 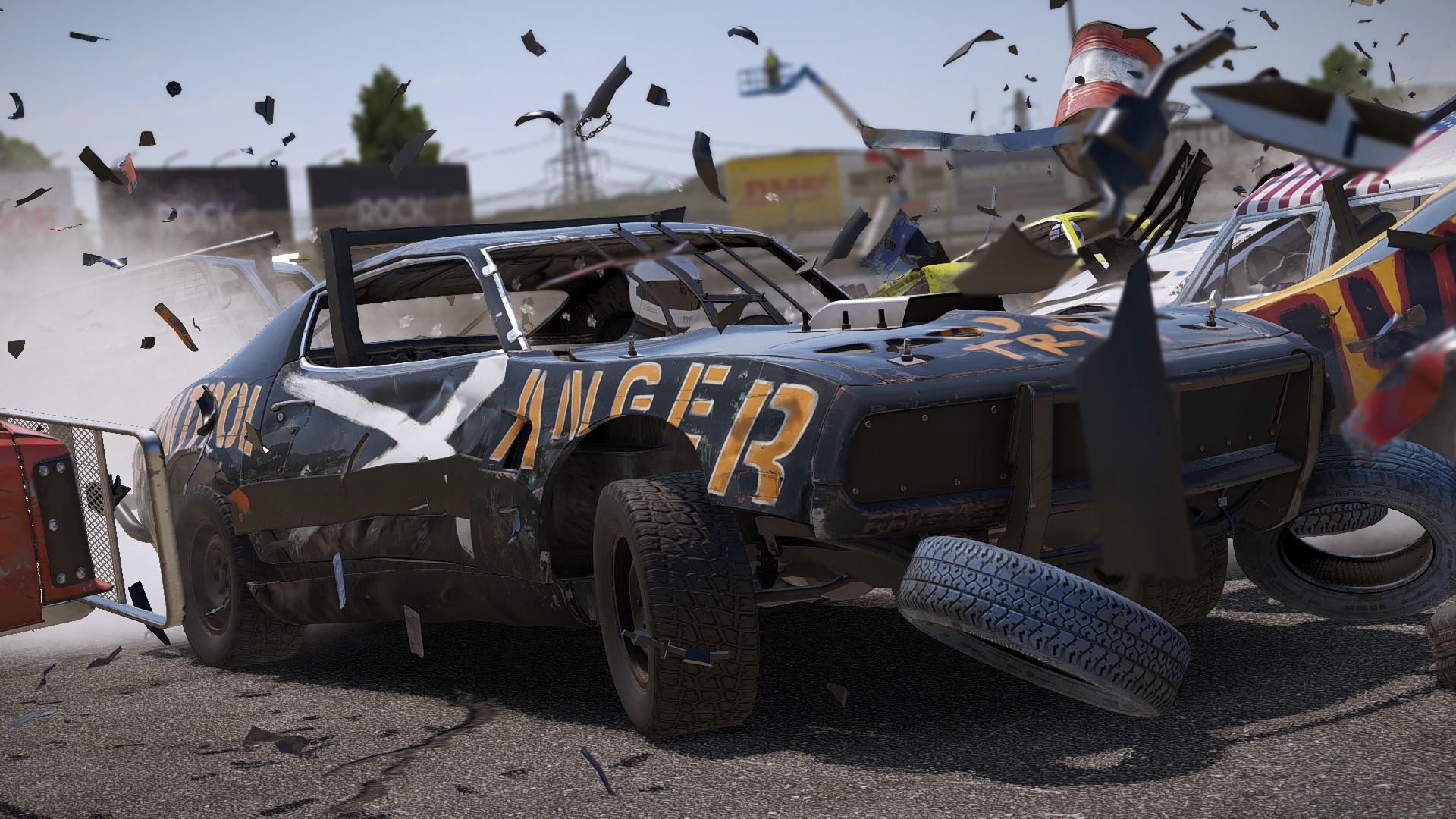 Wreckfest is available for PC now, with console release to follow later this year.

I wonder what this engine/game/whatever it is might be like if they made it in to a racing sim. I think it could be quite cool.
Upvote 0 Downvote

I like the updates! Great that it's still worked on!
I would really love an actual racing ai though. It can divebomb and knock you off but currently the AI is always too slow and the settings go from "slow and stupid" to "slow and suicidal".
But when you think the AI is just not coded for being quicker, you enter the 1vs1 events in the career and get your ass handed lol!
Currently you can only use the AI to fill the game with suicidal morons, not with actually well simulated opponents.

For me, wreckfest has great driving physics! To be fast is actually challenging and you can use trailbraking, be careful on the throttle etc. Of course the front end has too much grip and the rear slides too much but overall you can have some great racing in this game that is not offered at all in this specific way in any other game!
Upvote 0 Downvote

will do nicely in bot filled lobby
Upvote 0 Downvote

Wreckfest is so much fun it should almost be illegal!!!
We've had such a great early run with it on the PC, and now with them bringing it to consoles I'd expect that things will really start ramping up with even more content and enthusiasm from both the developers and the community.
It may even start to feel as though we're getting the next version, as in Wreckfest 2.0, for free.
The game just keeps on giving.
Upvote 0 Downvote

VernWozza said:
I wonder what this engine/game/whatever it is might be like if they made it in to a racing sim. I think it could be quite cool.
Click to expand...

Reiza's new title with this realistic visual damage would be in order I think...personal opinion...although I would probably spend the first few hours just crashing into the AI just to see what I have been missing for the last 10 years...LOL
Upvote 0 Downvote
J

Wreckfest is really a game made by enthusiasts, very well done, and I respect them !
But I would really like to come to their offices with a megaphone and yell to death that this game would be an absolute killing in VR !
Upvote 0 Downvote

Jeremz Pou said:
Wreckfest is really a game made by enthusiasts, very well done, and I respect them !
But I would really like to come to their offices with a megaphone and yell to death that this game would be an absolute killing in VR !
Click to expand...

It would be insane in VR! Make this happen!
Upvote 0 Downvote
M

No news of a new server in South America?
Upvote 0 Downvote
You must log in or register to reply here.