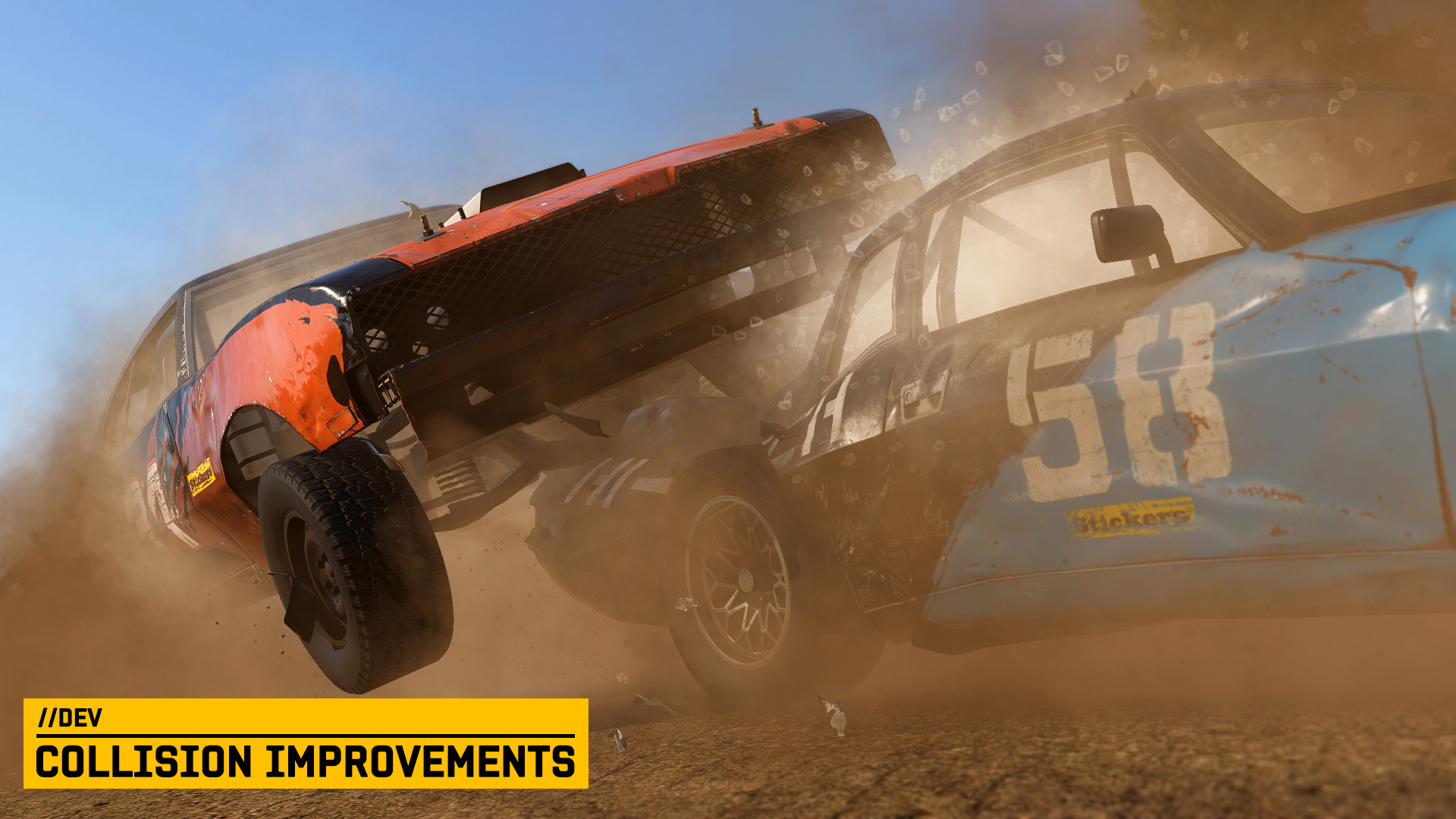 Good things are happening with the damage model of Wreckfest. Read all about the upcoming improvements here.

The title formally known as Next Car Game: Wreckfest has undergone a transformation in the last few months, with the developers having received an injection of funding thanks to new publishing partners, a console release right around the corner and of course the long awaited version one release status, it would be fair to say the past 18 - 24 months have been an exciting journey for fans of the game.

However, it looks like the team behind this highly underrated title are not content to rest on their laurels just yet, recently taking to the big wide world of the internet to confirm further improvements are heading to the game in the very near future. After recently revealing new content and HUD options that will be included in the next build release, Bugbear have now given further details on the changes due to be added to the damage model within the game - with some pleasing improvements seemingly in the pipeline.

Direct from the horses mouth:

As we've mentioned previously, while porting the game to the consoles we're also using the opportunity to improve many aspects of the game. During the past weeks we've already been introducing some of the improvements to you but we're not stopping yet.

One pet peeves we've been fighting with for a long time has been the lack of proper collision detection of the car bodies on the vertical axis (up/down), meaning that when cars have gotten on top of each other, for example when landing a jump, they have often clipped into each other and become a tangled mess. If you've played the game any longer than for a few minutes you've no doubt noticed this grievance – and many of you have, based on your feedback – and it's indeed frustrating, sometimes even getting you wrecked instantly when someone lands on top of your car and the cars get stuck into each other, causing them to deform like there's no tomorrow and resulting in massive damage.

Apart from that looking very unhealthy for the driver of the Rocket, the cars speeding from the ramp hit the car on the ground as well as each other, but instead of clipping into each other, the cars get beautifully deformed and are able to continue racing. Pretty neat, isn't it? Not only it looks much better (as in, less glitch-y) but it also makes a huge gameplay difference especially on tracks with jumps.

Now, there are still some pesky details regarding the collisions that we need to work out but with the main issue solved we're confident that they can be sorted out pretty easily and that we can push out this improvement in the next update. 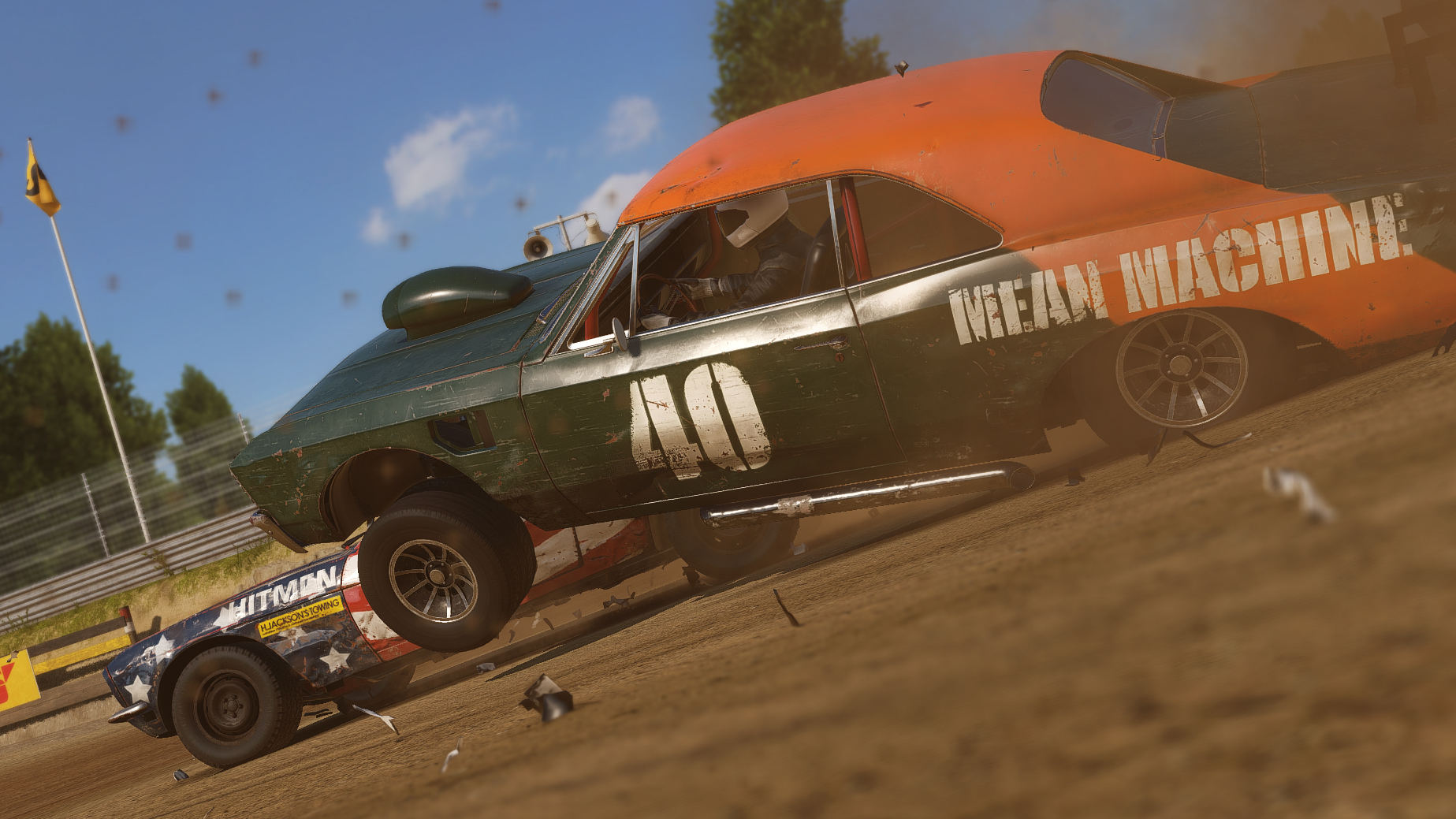 In the grand scheme of things this is admittedly a pretty small detail but since it can have quite a significant impact on the gameplay and knowing how much many of you have been looking forward to an improvement. Thanks for all your support and stay tuned!


Wreckfest is available for PC now, with console release to follow later this year.

but i must admit im gonna miss something like this on 3:02

Btw, other news from Wreckfest Discord (from JannesBB, the lead dev):

- Consoles will be locked at 30 fps
- And won't have 24 car grids (most likely)
- Console version is almost completed
- They aim at PC update before consoleros get the game, to bug test
Last edited: Apr 29, 2019
Upvote 0 Downvote

The game that just keeps on giving.
Codemasters could learn a thing or two from these dev's.
Upvote 0 Downvote

Very good! But i would like to know if there could be any chance to have VR in this game.. Enjoyin as it is and how it's still growing but that would be very cool.
Upvote 0 Downvote
T

Hats off to this lot for commitment and not a drop and run
Last edited: Apr 29, 2019
Upvote 0 Downvote

thepharcyde said:
I wonder where their revenue stream has been coming from given no DLC's etc

Hats off to this lot for commitment and not a drop and run
Click to expand...

publisher bought bugbear, they cant drop and run We probably gonna see some DLCS after console release but entire studio focus is on that PS4/Xbone versions
Upvote 0 Downvote
P

I really hope they had VR at some point - Wreckfest is fun!
Upvote 0 Downvote

Interesting. For the problem with the collision was not the droping of the cars on top of one another, but how they react to hits from sides. Sometimes they just move to one direction, but the balance of the car doesn't get affected, feels weird.
Upvote 0 Downvote

Such a great game, ridiculous fun. Wreckfest 2, on the assumption that we'll get one, will be an instabuy for me! I’d like a bit of a graphical upgrade but other than that, more of the same would be just fine, it’s that good.
Upvote 0 Downvote
You must log in or register to reply here.