Sadly for fans of good game platforms, the new WRC 9 will only be available exclusively on the Epic Games Store for PC players, with no plans to release the title on Steam in the forseeable future. Anyone who has used the Epic Games Store in the past will likely be disappointed by this news, as in comparison to the more widely adopted Steam version functionality and ease of use are rather less apparent than would be an ideal scenario.. anyway, I digress.. 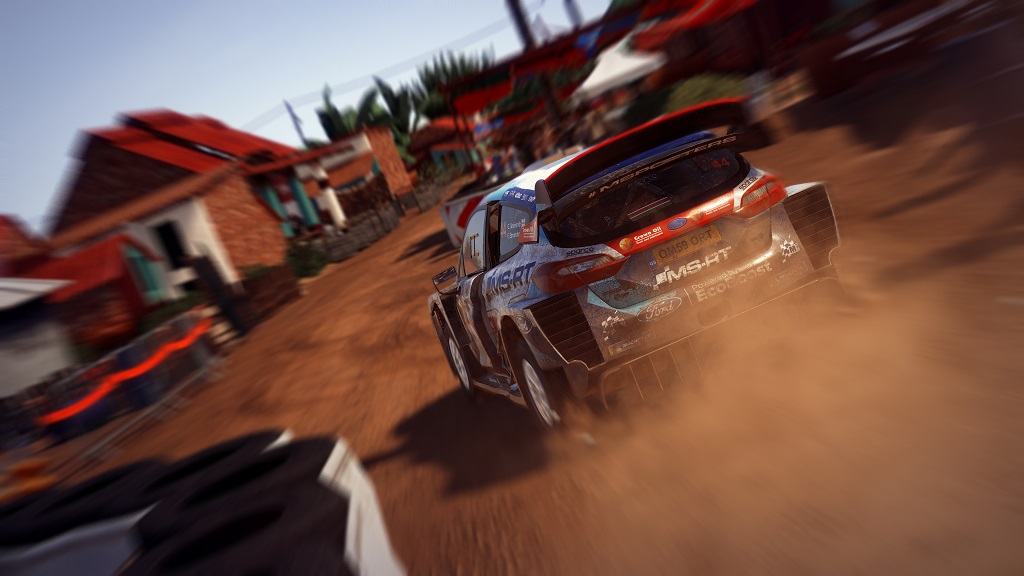 WRC 9 Key Features;
The new game released yesterday (03.09.2020) and is available now on Xbox One, PS4 and PC - with next generation console release expected to arrive closely following on from the new console releases and Nintendo Switch versions expected to be announced in the near future.

Check out the new WRC 9 launch trailer below:


Furthermore, the developers have confirmed their initial plans for post release content within the simulation - revealing the below post launch roadmap - with some interesting content additions coming to the title - not least of which is the inclusion of some epic historic events the likes of Finland and Portugal: 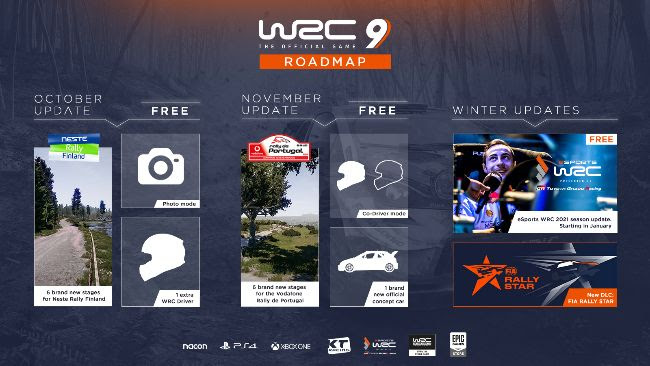 WRC 9 is available now on Xbox One, PS4 and PC.

Want to learn more about this new rally title? Looking to share your experiences with WRC 9 so far? Head over to the RaceDepartment WRC 9 sub forum and get a post up and live today! 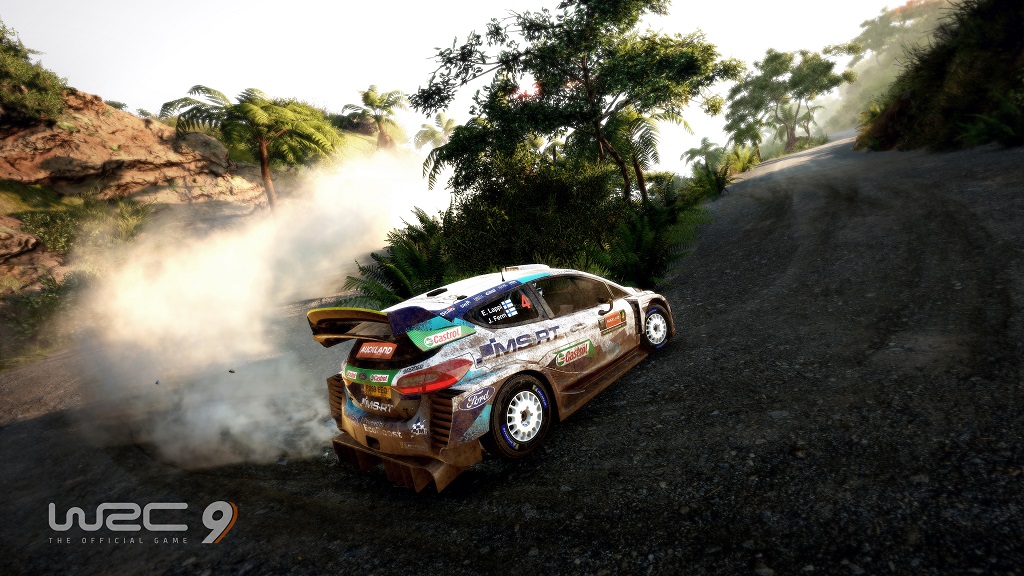 Is it playable with Controller?
Upvote 0 Downvote

Iwan Jones said:
With the news of Codemasters having the contract next year i dont think ill bother with WRC 8.5.
Click to expand...

have fun paying extra fees for certain stages and cars, remembering the disaster that was Dirt 2 with its first DLCs being rereleased tracks of Dirt 1. for me also Dirt 2 never performed well, which didnt make any sense to begin with, its an old engine.

Dirkster said:
Is it playable with Controller?
Click to expand...

Drives a little bit better.Cars have less grip on loose surfaces so they slide a bit more. But it still feels odd. Feels fake. Cars don't powerslide as much as they should through gravel and dirt. It's almost like there's a hidden traction control system that prevents it. But, this time is not too bad.
Anyway, everything else is exactly the same. At this point it even looks outdated and for some reason it also sounds worse. It sounds more muffled.
Performance wise, i think it runs even better than WRC8, but then again i didn't have any issues with WRC8 AND i recently "upgraded" to WIN10 and 6 core CPU, from win 7 and 4 core CPU so...i don't know. My GPU is still the same crappy GTX660 though.
I hope this is the last WRC game made by KT though. WRC needs a better representation. Hell i hope they won't make another TT game either....
Last edited: Sep 5, 2020
Upvote 0 Downvote
D

NO STEAM No Buy. LOL

i have enough Rally games to fill my needs anyway and also they are in VR..
Last edited: Sep 5, 2020
Upvote 0 Downvote

To loosen the cars up, move the power distribution towards the rear wheels. Rear brake bias and tinkering with the rear diff also helps. The default setups seem to be too stable and conservative.
Upvote 0 Downvote

I don't know about you, but the only time i've ever gotten motion sickness is from playing a rally game in VR. i'll pass on that feature lol.
Upvote 0 Downvote

To me, after putting in about 6 hours or so into the game, it seems Kyloton has again made improvements all the way around -- especially the physics model and FFB. There are a few weird new bugs which didn't exist before, but hopefully they'll iron that crap out in the near future.
Of course it has flaws and missing features just like any other racing game.

Runs butter-smooth 60fps on triples with high settings for me.
Of the 20+ Rally games I have installed, this feels like the best of the bunch.
Upvote 0 Downvote

HoiHman said:
The WRC series has no telemetry out except for D-box.

This means the buttkickers, AccuForce, GS-5, SFX100 motion, simhub displays and the windsimulator will not work

NO telemetry NO buy.
Upvote 0 Downvote

Tell them you want telemetry output. Couldn't hurt, might help.

I did use the Contact form now to request telemetry.. I suggest everyone do the same, maybe they notice.

But telemetry output has been asked forever. In some way the French developers seem to be daft (or perhaps terrible English?), SimXperience staff has reached out to them several times to make Sim Commander 4 support happen (like in about every other racing/rally title, even very old ones), no reaction, no replies... after several contact attempts, many years.

Maybe because Kylotonn is unfamiliar with "hardcore sim scene", they don't understand the importance of Sim Commander 4, and how they do a disservice to their own game by not cooperating

Or maybe some weird exclusivity deal with D-box, but that wouldn't make much sense. More supported hardware, more sales. D-box support even shows, that the telemetry is already there
Last edited: Sep 6, 2020
Upvote 0 Downvote
S

*runs and hides* Is this game worth it compared to DR2?
I'm not honestly too bothered if it isn't a 'sim'. I want something that's fun to use with a wheel and make me feel I'm competing in the WRC!
I played 7, but skipped out 8. Reckon this is worth a buy?
Upvote 0 Downvote
S

Hi there do you know how to map key functions to button boxes ? Such as wipers or external usb shifter (same time as my fanatec setup)
Upvote 0 Downvote
T

sb99nufc said:
*runs and hides* Is this game worth it compared to DR2?
I'm not honestly too bothered if it isn't a 'sim'. I want something that's fun to use with a wheel and make me feel I'm competing in the WRC!
I played 7, but skipped out 8. Reckon this is worth a buy?
Click to expand...

Buy.Try.Refund. There's no point in asking for "opinions" when you can try it for yourself. Opinions tend to be VERY biased for various personal reasons. Even official reviews are biased.
Last edited: Sep 6, 2020
Upvote 0 Downvote

Yeah I do think so. Strange because all my other games do run fine and smooth.
Upvote 0 Downvote

Well I have read here in this topic there are performans problems like there where in WCR8 .
solution: switch from full screen to bordeless window.
just did and tada. all settings on max and silky smooth.
Last edited: Sep 6, 2020
Upvote 0 Downvote

dammit
first Flight Simulator than this. definitely had to move to W10
Upvote 0 Downvote

Does Epic store do 2 hour refunds like Steam? Might give this a go, although WRC 8 is coming to Steam on Tuesday, so maybe I should give that the old 2 Hour test drive to see if I like it, then give 9 ago if the sim racers think it's an improvement over 8.


gamer19 said:
dammit
first Flight Simulator than this. definitely had to move to W10
Click to expand...

Don't resist change so much ...people stayed forever on XP because they were avoiding the "horrible" windows 7 too lol. Windows 10 has been out awhile now, it's very stable and IMO the best version of windows yet (been through every version from Win 95 to now), I've had maybe 1 BSOD ever since upgrading 2 years ago and I believe it was due to a failing stick of RAM.
Upvote 0 Downvote
C

Finally had a chance to spend some time with the game.

Yeah, well. It's a bit meh, really. It does feel like an update or maybe a fan mod to WRC 8. Small improvements, nothing groundbreaking.

It's great they fixed the weird FOV adjustment, however, I still can't set the view like I would want to, because the range of settings is limited or rather kinda weird - you can set the FOV to be ridiculously wide, but there's not nearly as much headroom on the opposite end, so low FOV setups like mine are still kinda screwed. Same goes for the seat adjustments. Even if I set the lowest FOV and move the seat as much forward as I can, it still feels like driving from the rear sear with my hands being three times their length. Also the FOV setting still uses arbitrary numbers that have no explanation, not degrees. Using dash view has the same problem with the FOV setting, but the exact opposite with the "seat" adjustment - it's too close regardless of setting.

Speaking of cockpit camera - the virtual wheel only has 180 degrees of rotation, so forget about it being in sync with your real wheel.

FFB is kinda meh. I compared it side by side to WRC8, and it certainly got better. It still doesn't tell you all that much about what the car is doing, though, and most of it still consists of annoying canned vibrations, including what people would call "the road noise", I guess. Not a big fan, DR2's nuanced FFB is miles ahead. But there's a fair amount of sliders and I didn't play with them yet, so it's possible you might be able to make a better FFB mix yourself if you spend time with it.

Most of the stages are the same as in previous games, but the visuals have been updated again, so it looks better. And the Kylotonn WRC games always had great stages, so mostly no complains there. Though it is still kinda annoying when the game says you're driving the stage (insert a name of a famous real-life stage), but you're actually just driving a fictional stage kinda inspired by the real one. It's like if in say the F1 series, you selected Spa, but actually drove a fictional track that has certain features of Spa, but otherwise a very different layout. (But yes, I do understand it's easier with tracks to be authentic, compared to rally stages.)

Runs mostly well, but I was getting tons of microstuttering intermittently, regardless of what I tried. That's a bit of a staple of the series, to be honest, and it's kinda annoying it's still present.

The modern cars feel OK, the historic and bonus ones less so. When I tried say the Lancia Stratos, it didn't drive that great. And the sound, and the engine noise in particular, is pretty poor IMO. All cars kinda sound like a vacuum cleaner, with very treble heavy, whistling engine sound.

So certainly not a bad game, but not a great one either. I remember liking the WRC 8 a fair bit more, possibly due to the fact that it felt like a more noticeable step from 7 to 8 than it feels going from 8 to 9. Especially for a full priced game.

But again, that's just some first impressions after about an hour of driving.
Upvote 0 Downvote
C

BP said:
Windows 10 has been out awhile now
Click to expand...

You can certainly say that It's been over five years now - July 2015.

And Windows 7 was released 11 years ago. I've never understood why people cling so much to what is over a decade old system that's not even supported anymore, but for some reason, they do.
Upvote 0 Downvote
You must log in or register to reply here.