This is my first fantasy stage for rbr which is far from complete and will probably look nothing like the final version. The reason for it's existence is that I had decided to take a break from my 'serious' project and create something that might help me to improve my driving on tarmac. I've had such fun in the last couple of days driving and crashing that I thought I would share it. Some may find it tedious, others may not.

The stage: It's a tarmac stage, about 12km in length, whose working title is 'twisty 2'. The reason for the name becomes apparent very early on as you drive through it. I have decided to use quite a wide road with a camber so that the many turns can be taken at higher speed. I am quite pleased with the track itself but the terrain and trees are only there to stop you from falling off the sides, and for crashing into respectively. I have done an almost complete set of pace-notes which I think are fairly accurate (except the last hairpin). The few places that I have used the 'caution' note are places that you will kill your car if you overshoot. Apart from the trees there are very few other objects and the terrain is very rough with some enormous polygons. Any feedback is welcome and I hope you find it worth the time taken to download and drive.

I don't know if I packed the track correctly but I copied my RX-CONTENT folder from RBR then renamed and zipped it. The X packs I have used are the GB for objects, Haywood for road and SMES for terrain so thanks for the creators of those. 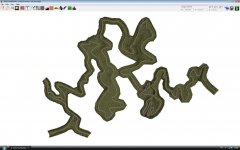 Could you upload it somewhere else, I just can't get it downloaded from RapidShare...
S

OK I'll try megaupload. I only use rapidshare because I'm a premium member. I'll try to post a link soon

EDIT: I've uploaded to megaupload but it's saying it's temporarily unavailable so I've put a filefront link in my first post
G

It looks nice! Could you put a bit more pictures of the track please? I cannot run RBR at the moment and I'm curious!
S

Here are a few taken fronm inside btb with fraps. As I said the terrain is very rough and the objects are just really placeholders 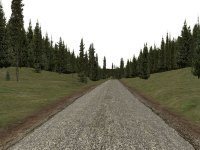 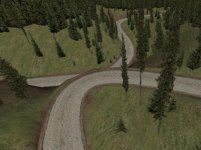 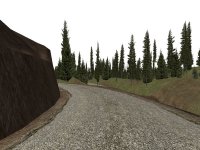 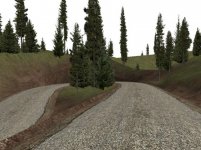 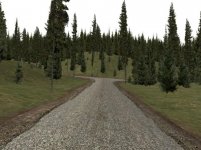 Textures look really nice. I suppose you used the "blend" tool a lot for terrain?
Your "T" junction is also very nice. How did you manage to get such result? Is it fast?
Thanks for sharing your project!
S

Yes I used blending for the terrain. My main project has a lot of junctions so I have become quite used to doing them. It has fast parts with quite a few 6th gear straights but the many sharp bends slow things down quite a lot. I am not a very good driver so my best time so far is 9:30 for just over 12km
N

I just drove the stage few times. It's very nice tarmac stage that has a bit of everything in it. Twisty and and then some fast sections as well.

I like the tarmac texture but there's a narrow line of gravel on both sides of the road, but it's really tarmac (in physicswise). It would be pretty neat to have those gravel strips to be gravel for real. But I know this isn't your mistake because I have tested some other tracks with the same texture and they have the gravel part as tarmac as well.

All in all, a very enjoyable stage. Maybe you should consider making some some guardrails to those super-dangerous places. I nearly went off during my familiarization run while driving 80 kph.
S

here's a video of the stage as it is at the moment. Still work in progress, probably about 50% complete. I hope to have another drive-able version soon. As you can see I have added a lot of guard rails and as I thought it has changed quite a lot from the first version. I'm happy with the road and the overall map and I've decided to stick with the sandstone-like blend texture as it works quite well on it's own as well. Please excuse the poor video quality and even poorer driving.

Here is a new playable version of my track. If you downloaded the first one you will notice that it is quite different and hopefully more interesting to drive.

I think it is about 80% complete but knowing when something is finished the first time is difficult. I would welcome any feedback especially I would like to know about performance on other people's systems. I wanted it to have the feel of a country drive rather than a forest so I have used individual trees for 90% of it resulting in a total of 47000 objects and loads in about 40 seconds. It runs fine on my system but if people experience lags than I shall have to look at reducing the number of trees and using some tree walls. I would also like to know what people think of the pace-notes (accurate, too few, too many, correctly placed?)

Here's a newer video, slightly better quality with sound and without the annoying watermark

Here is an update to my track. It's called Ambrosian hills and I think it is nearly finished. Any comments or criticisms welcome. Carl

just noticed I spelled the name wrong on the uploads Duh!

Edit: changed the filefront link because the first one isn't compatible with RXRSRBR
A