Hey there.
Yet another Caterham ?!
There's a little bit of a story behind it, not that long don't worry. I owned a >Caterham< for several years, sold it last year. I will be one year caterham sober soon in other words, and i guess I had to do something about it. Since i can't afford one at the moment, maybe it was time to convert my never-finished model into Assetto Corsa. 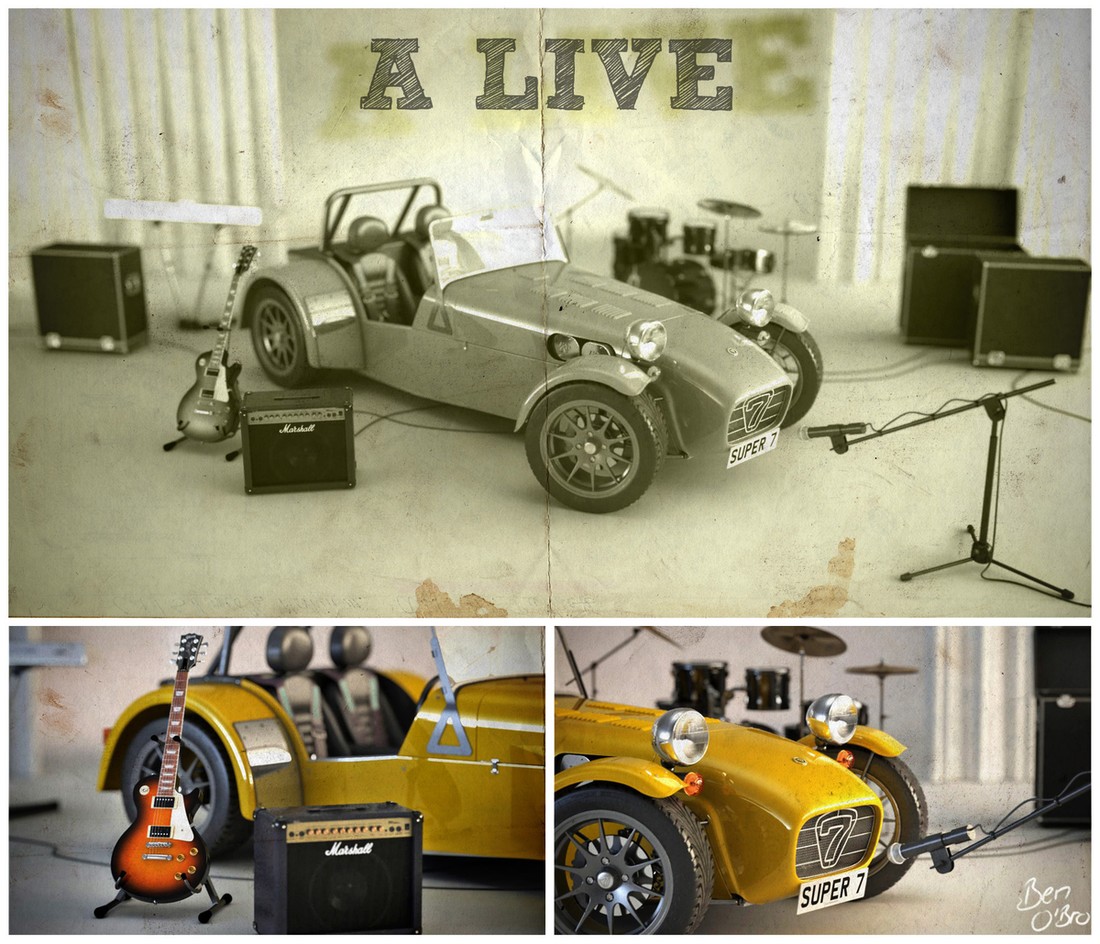 Then the idea of making a Mod came as i contacted the creator of the brilliant mod Caterham Academy.

Sir Kamil gave me permission to use his physics, at least for a start and strong base.
That did give me lot of motivation to open my 3dsmax files again...
After 7hours of deep cleaning and completing (mostly cleaning and reducing polygons to match the budget...) i present you, my mighty Seven! 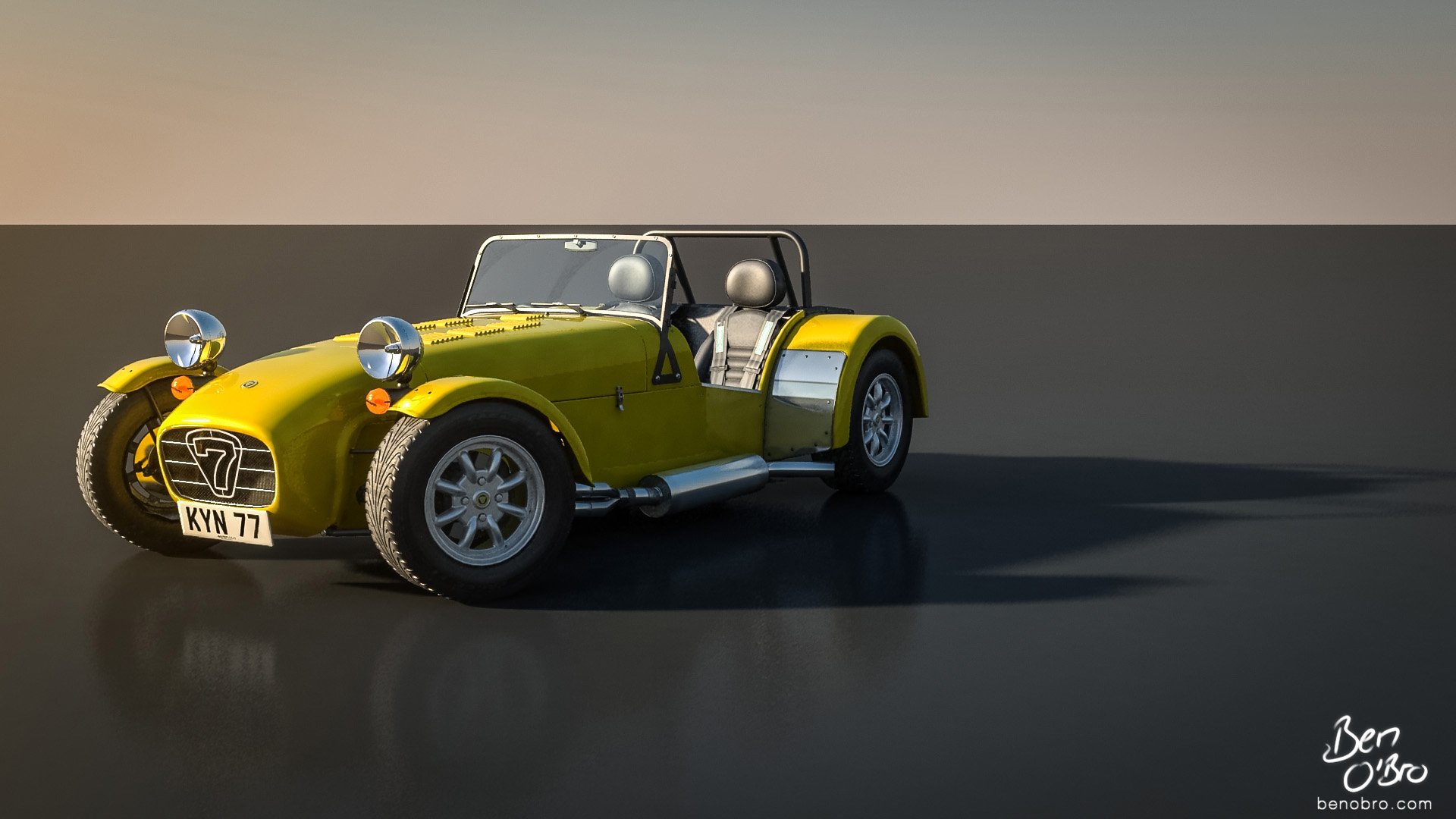 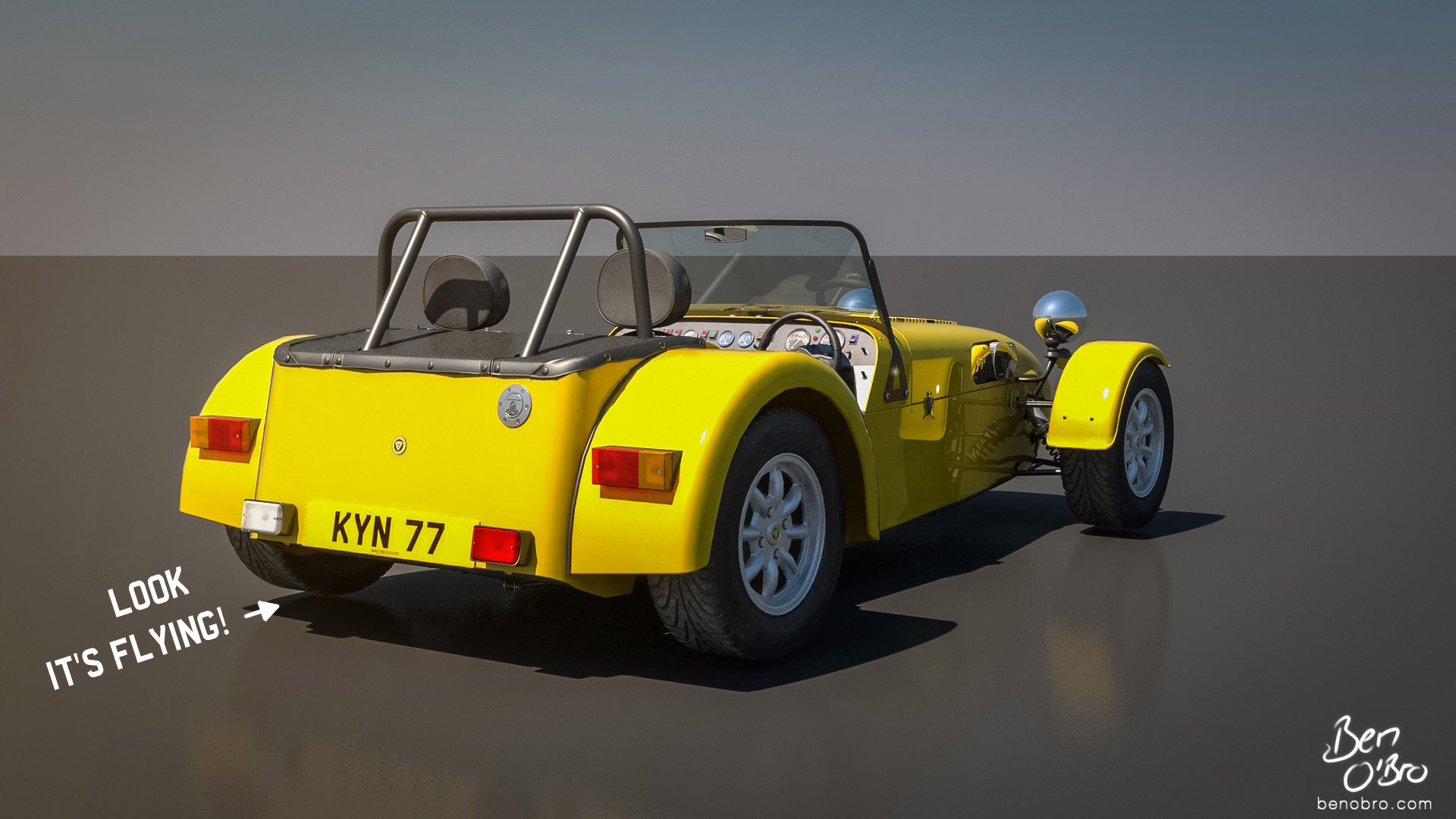 
Renders done with VRay. The tyres are just here for render purpose, they are full 3D (60k polygons each...) and the engine will have to be removed for the mod.
The rest of the car is now 90k polygons, which i'm happy with. I still have some things to add, polish, remodel, clean etc. (bonnet, dashboard details...)

I don't know yet the specifics about the mechanic/physics. I had a super sprint 1700cc with 135BHP, i really wanted to bring my car to life in the game, but since it's really close the specs of the Caterham Academy, I will probably make a HPC version instead, meaning about 160BHP (the model itself won't change).
The challenge for me is really to import the car in AC since i've never done it, that should be fun.
If that goes well, i might try to do other versions of the car, but first things first

I will try to keep you guys posted here on the progress. I have a full time job already keeping me busy, so please bear with me!

Thank you for reading.
Cheers
-Ben 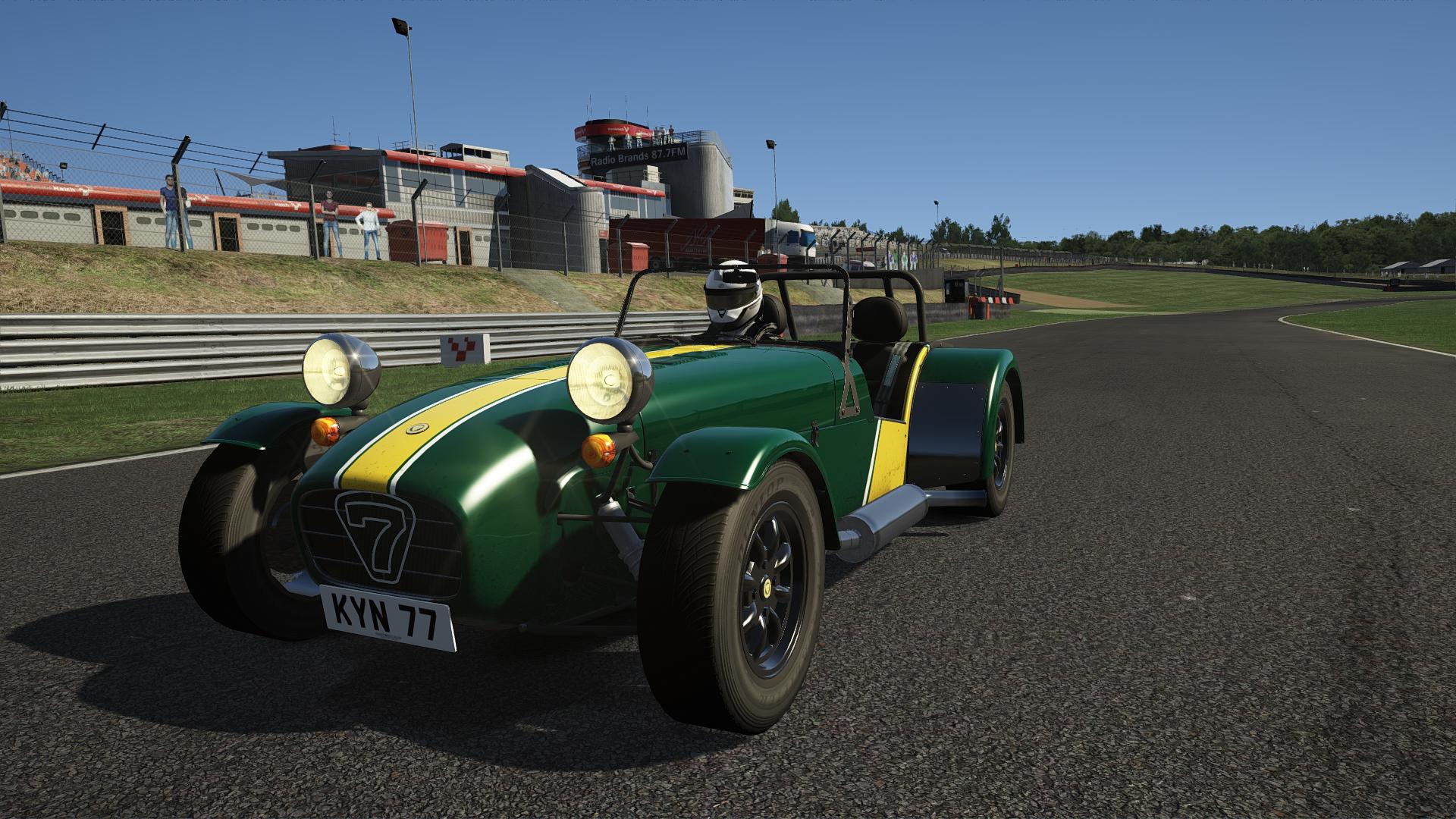 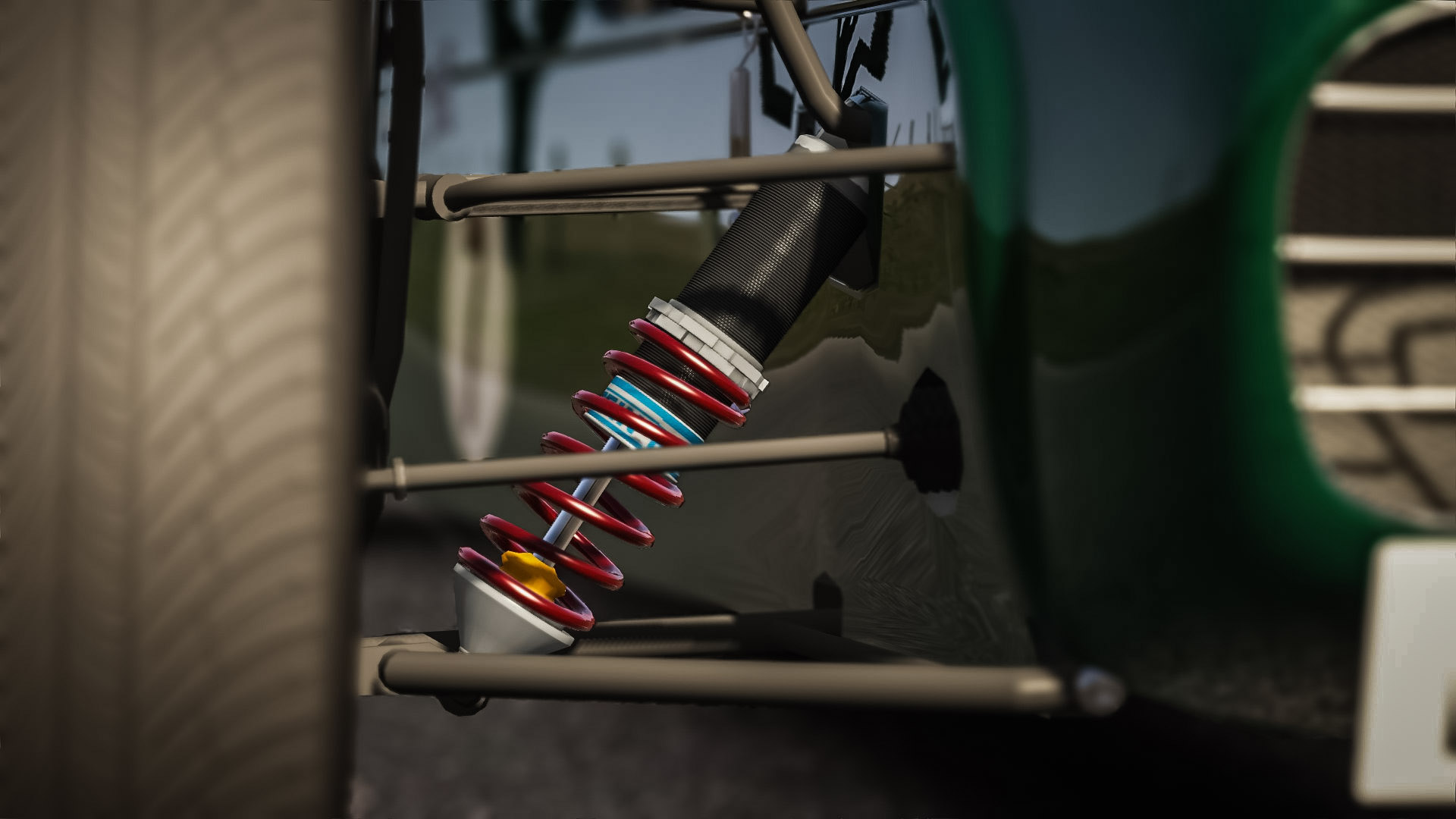 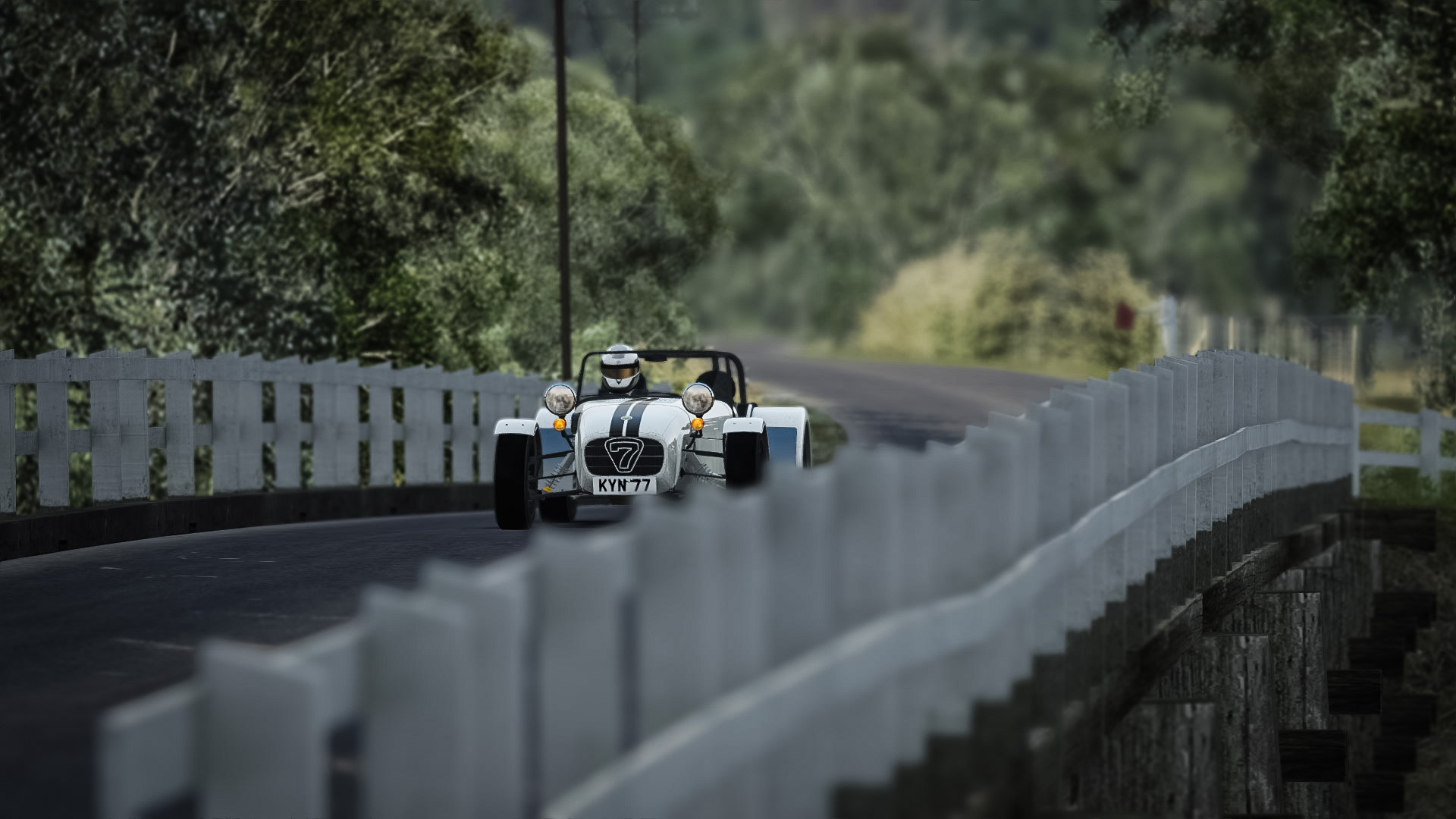 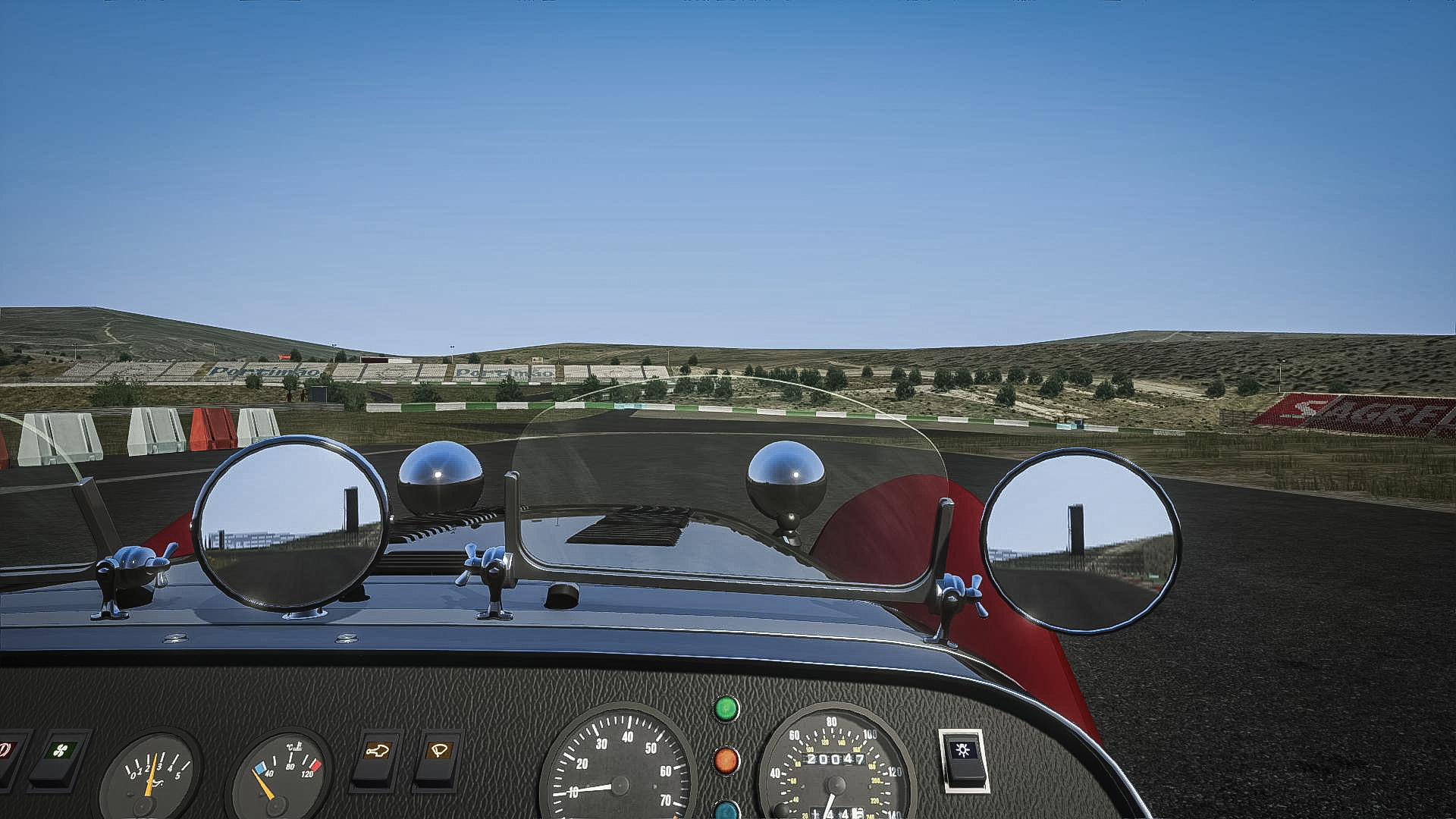 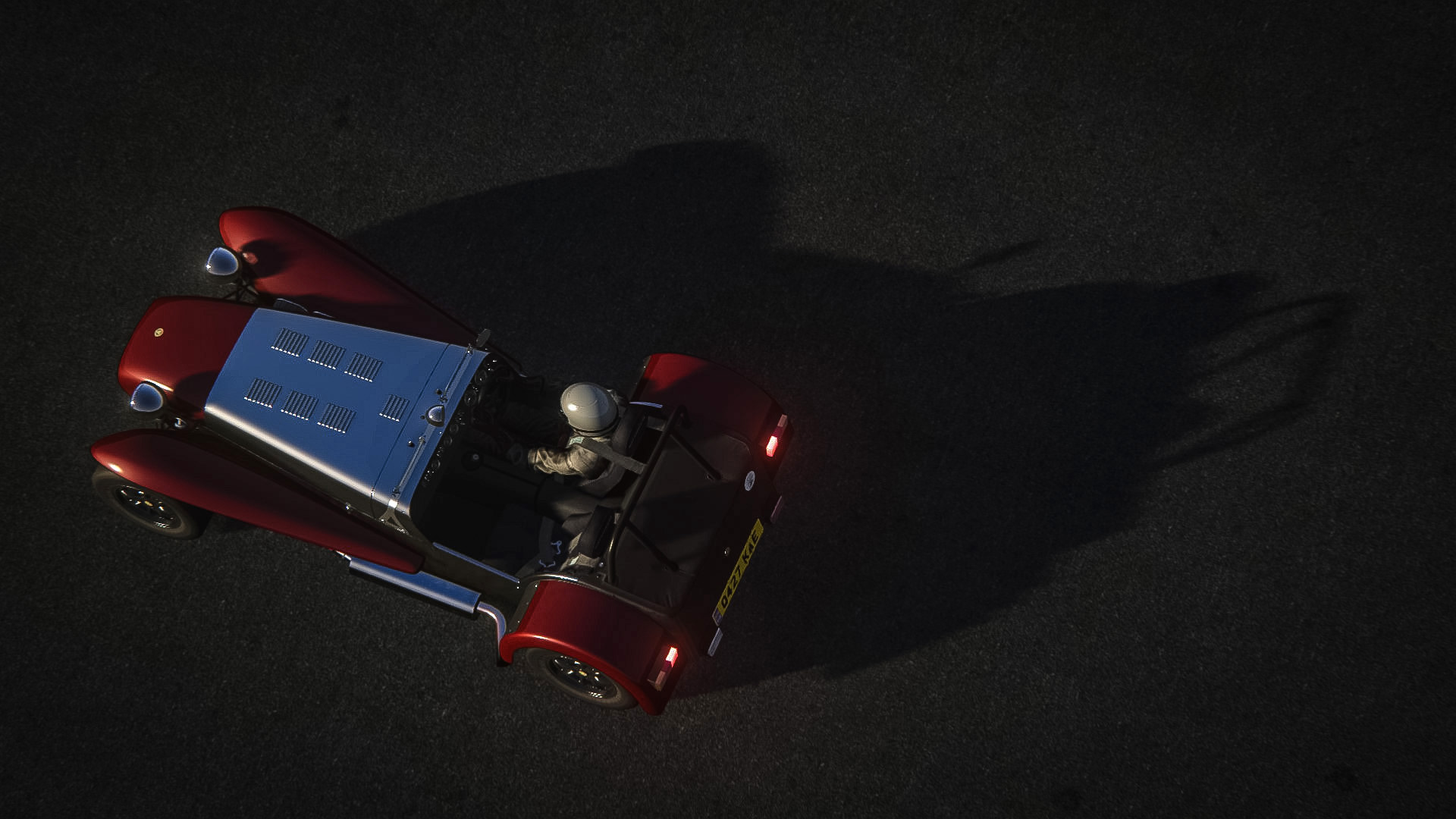 These are incredible news my friend! You will make lots of people happy with this Take your time. Great things take time
Cheers from Portugal!
Mauro

You're very talented as a modeler! If your physics are as good as this 3D mesh this is going to be one incredible car for Assetto Corsa. Good luck!

I love you sir, and would like to have little caterham-shaped babies with you.

Wow great news. As "the other Caterham" mod seems to be no longer in developement, i offer my sounds for this mod.

I have made a new sound set with great recordings i got:

Don`t suppose those sounds will be happening for the old kitty academy mod will they? Would be nice to have them

Really good news all in all! Looking forward to it!

@Fonsecker, that would be an honour! Your last sound edit is amazing work.
@everybody, thanks a lot for the enthusiasm, that helps mucho!

Little progress.
Fun fact, i keep a spreadsheet since i started with the time spent on the car... that ain't pretty. 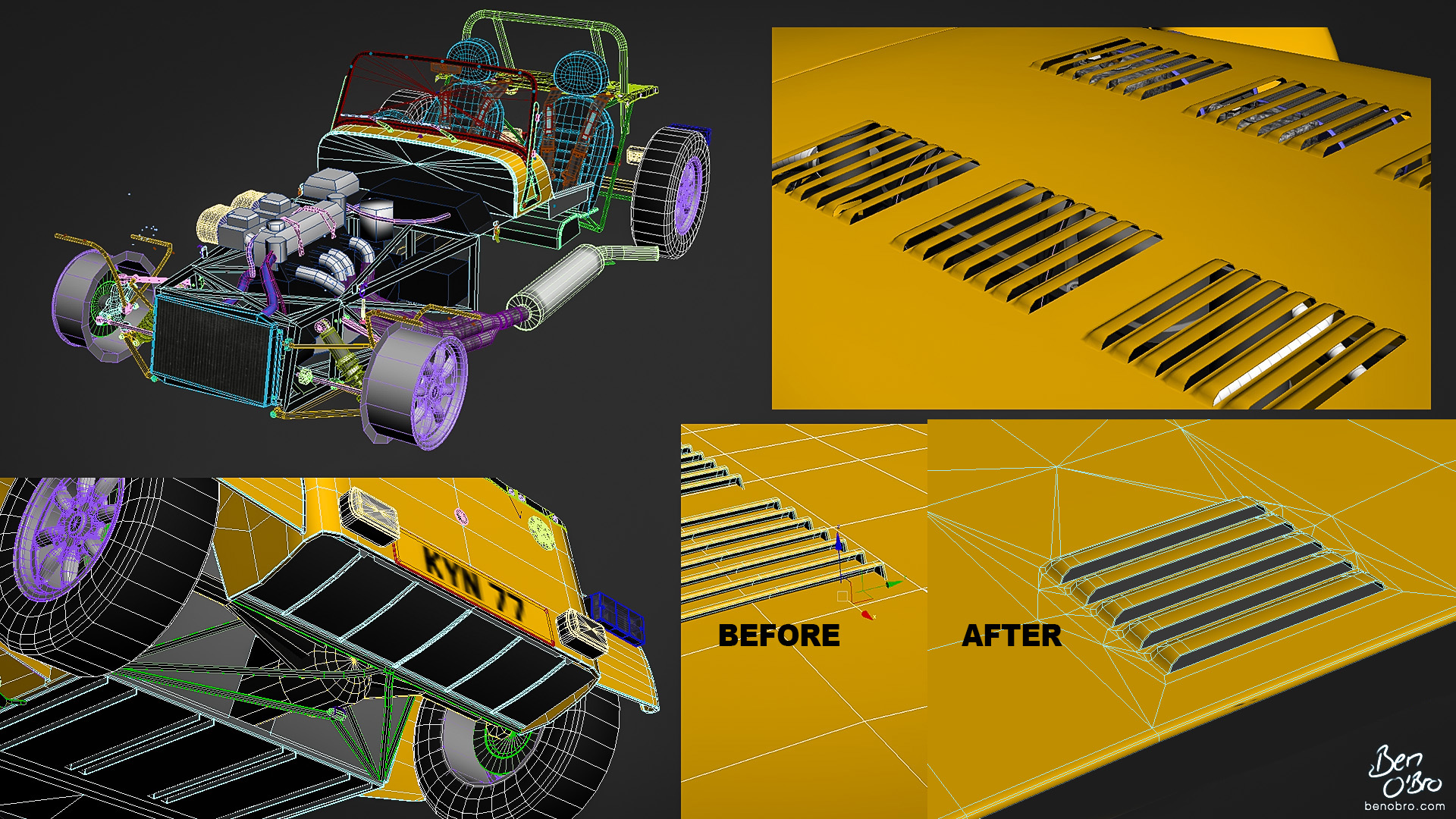 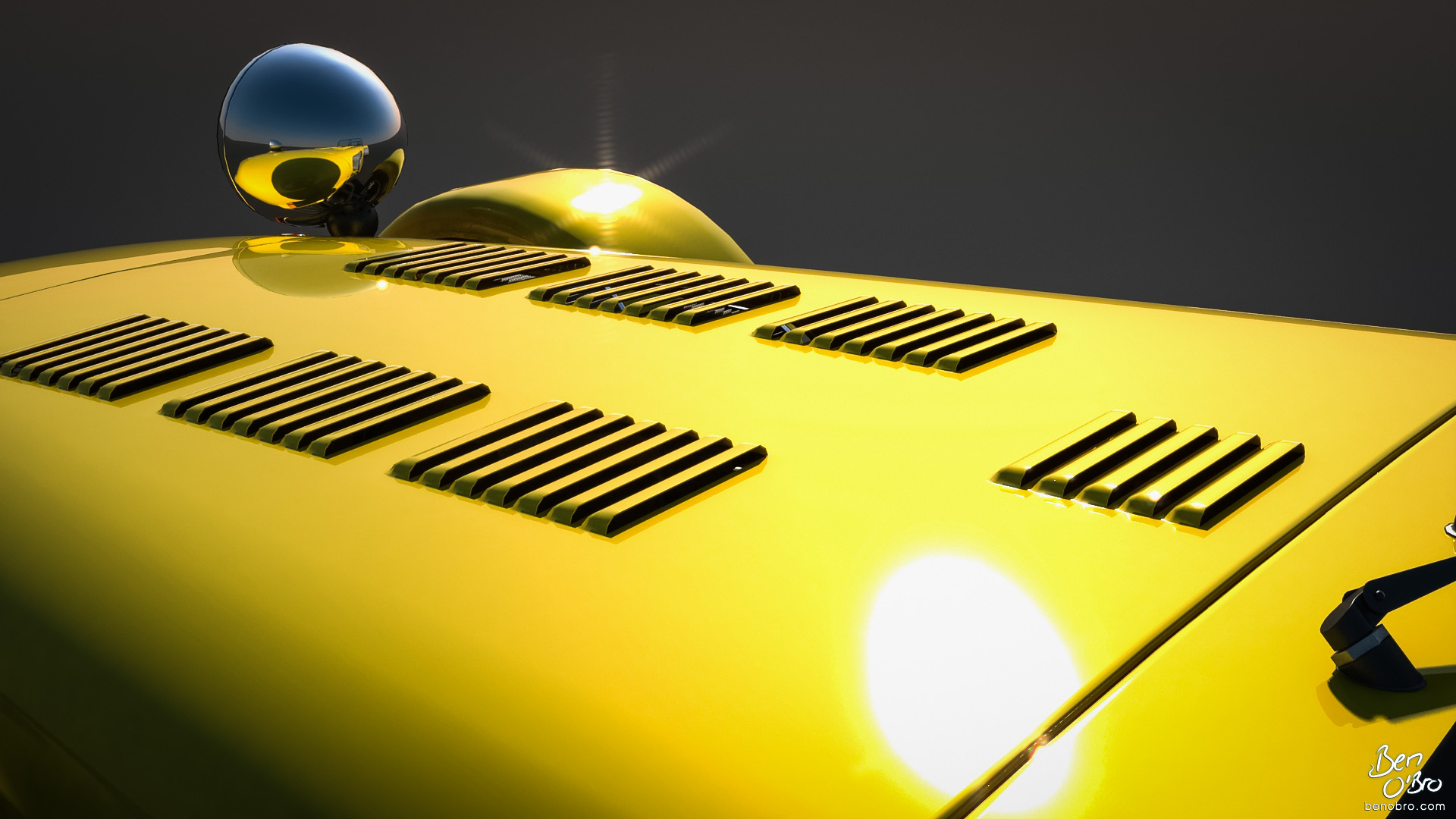 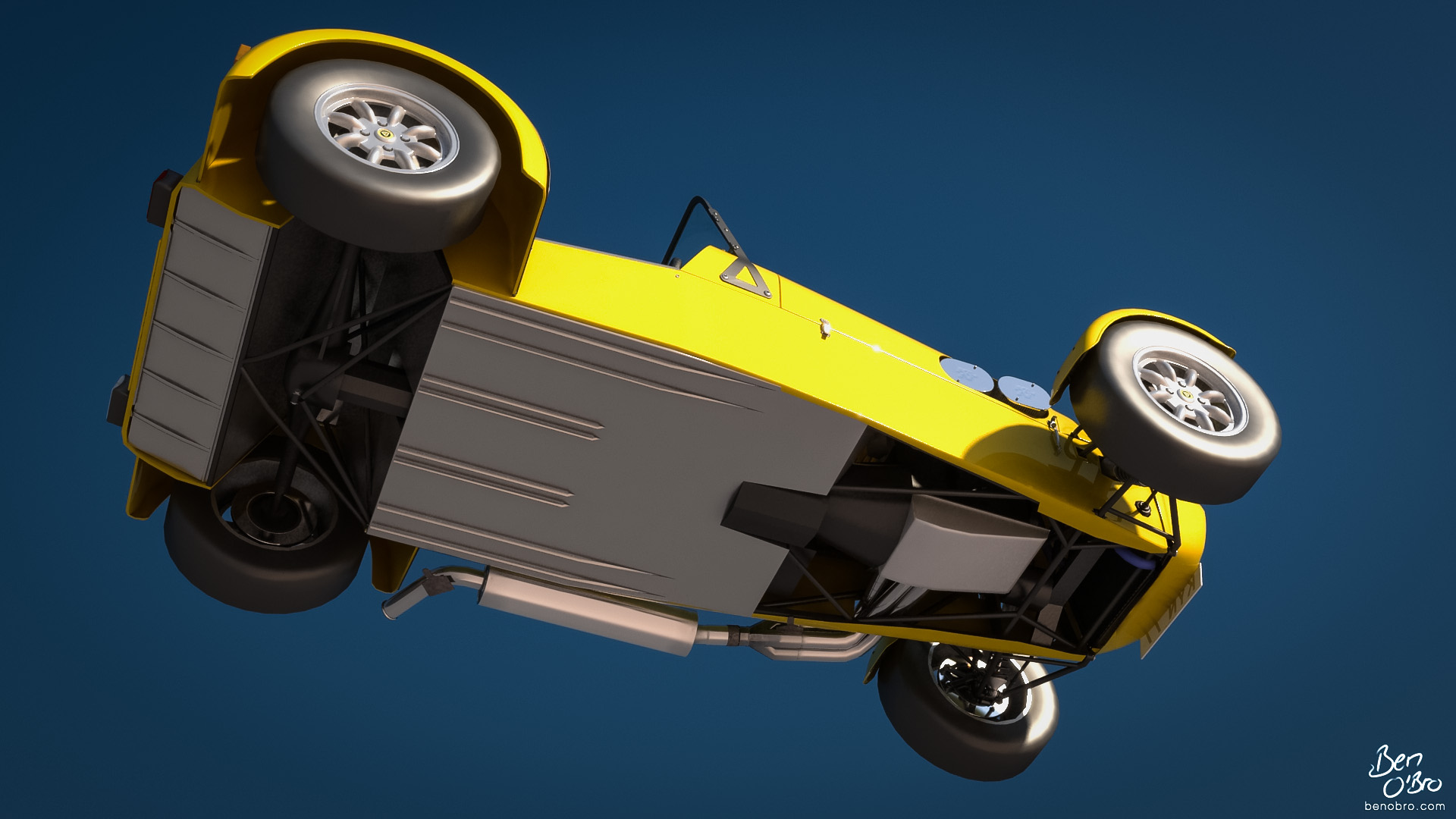 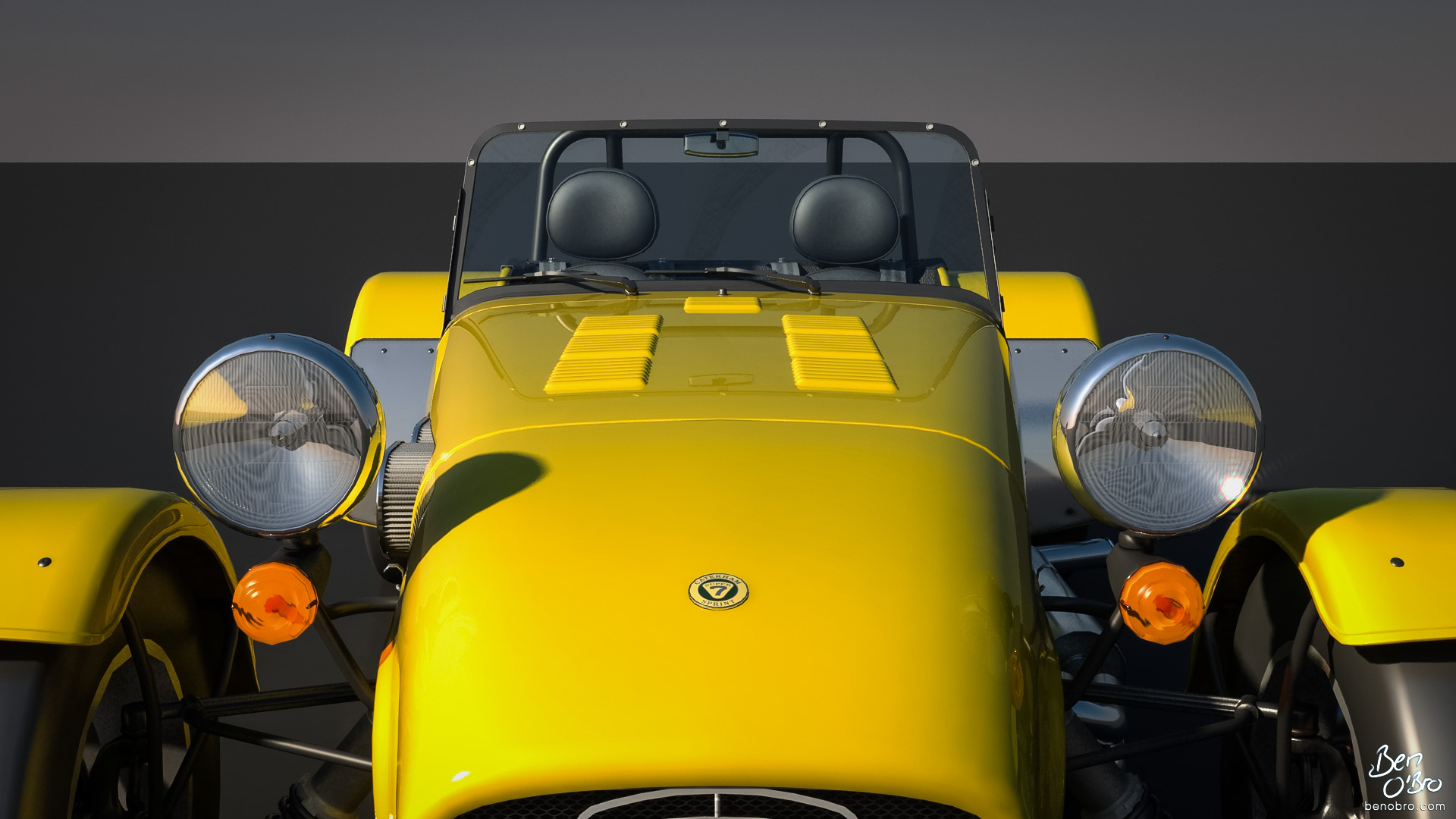 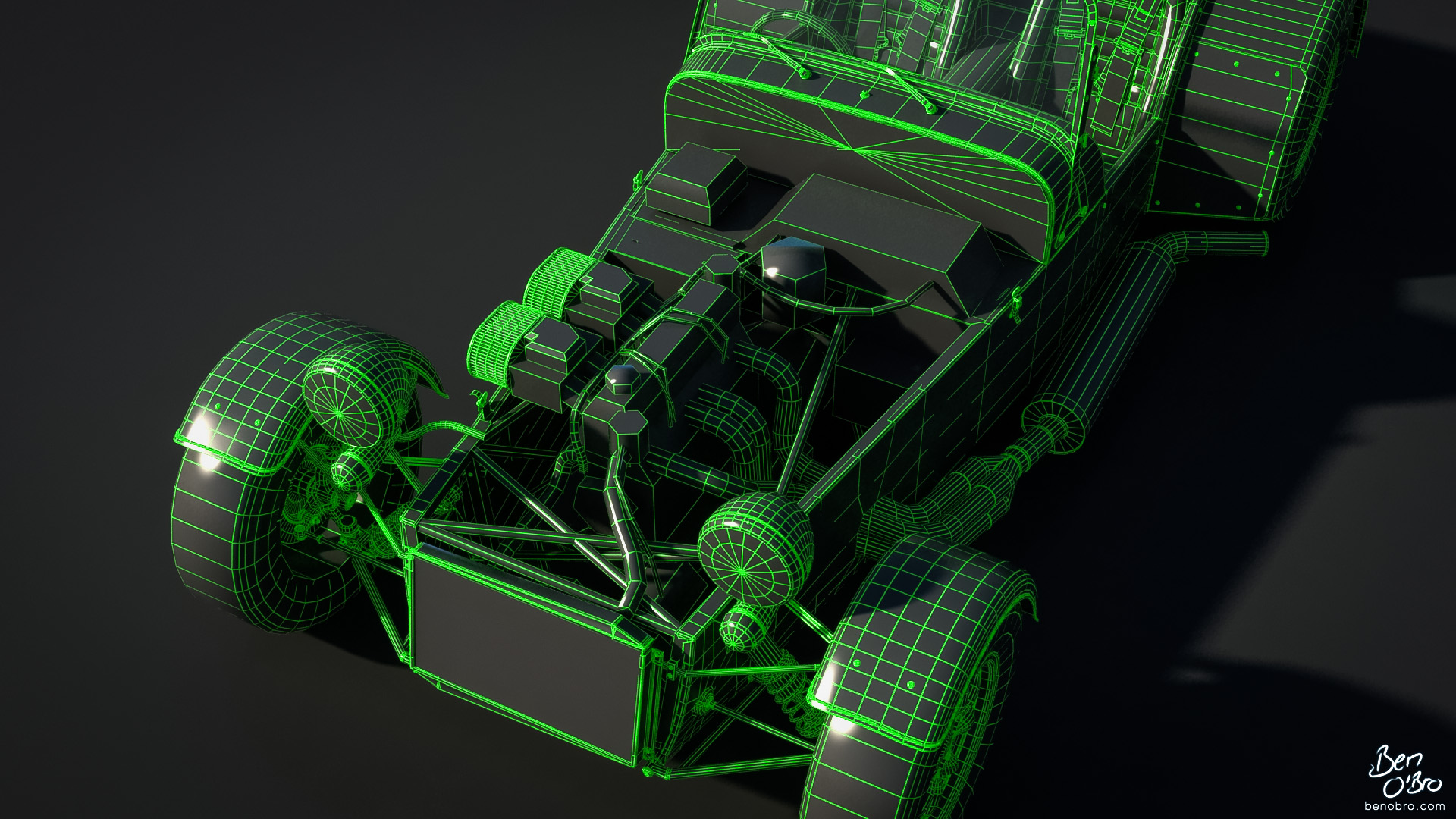 (i always upload all the renders on the initial website http://benobro.org/i/7mod/ )

Next on the list is:
that's it for tonight!

Just perfect. I have an absurd love of all things caterham,so anything I can contribute is yours.

The caterham Academy Mod from Kamil is a blast to drive, even if the physics are not uzp to date. I love the feel of a lightweight car. Makes so much fun on Nordschleife.

So i cannot wait till i can drive this beauty!

I know it´s a bit early but is it possibel to get a left side steered version also or is Caterham allways right side steered? It feels allways a bit of unnatural to drive on the "wrong side".

Does AC do the correct physics for the rear axle on this car?

Nice model by the way... always fancied doing one after a friend owned a 7 Superlight R (amazing car!), but never got around to it.

If I'm allowed to nitpick:
The coolant hose is cut off
The tyres have strange lines on them
The headlights could use a stronger NM
Maybe the rear wheel arch could use another few rows of polygons just to smoothen it out a tad more.

But hey, of that's all I can think of, what am I talking about Love it!

If I'm allowed to nitpick:
The coolant hose is cut off
The tyres have strange lines on them
The headlights could use a stronger NM
Maybe the rear wheel arch could use another few rows of polygons just to smoothen it out a tad more.

But hey, of that's all I can think of, what am I talking about Love it!
Click to expand...

I belive the author will like those observations Those are NOT attacks. Just a comunity being a comunity by tring to help

I'd only add that poly count on the wheel might be a bit too low when seen from the inside (pic), other than that it's gorgeous as it is!

Hello hello!
it's summer, it's sunny weekends, it's too many hours on the computer in week days... as a result, not much time spent on the caterham.
I did finish the dashboard though.
(thanks to Patrack7 from sevener forum who helped me get few references for textures!) 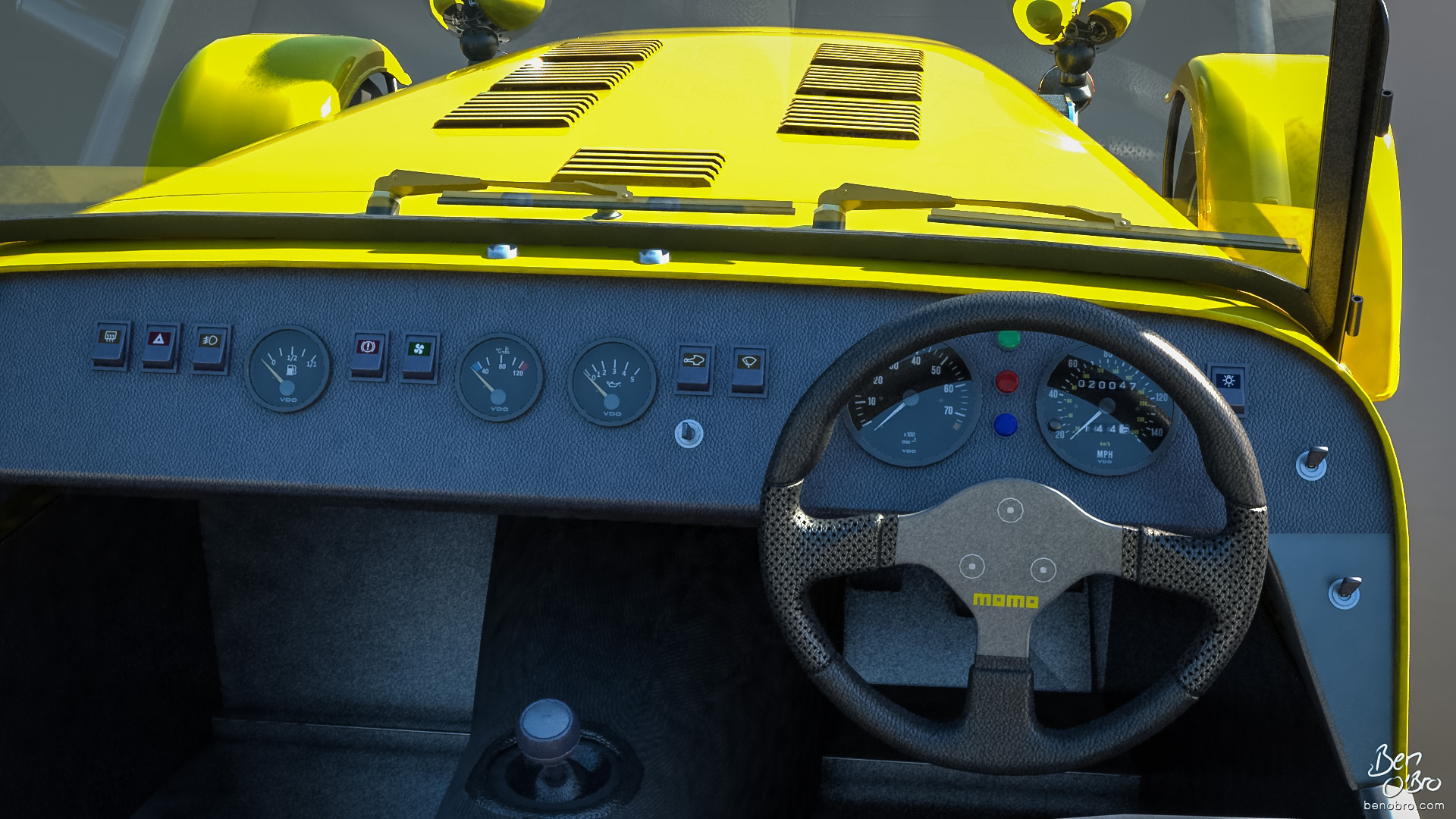 
Thanks again for all the love.
@Fonsecker : having a car both sides would be nice indeed, good point, maybe with a 'S1' ingame like the countach with/without rear spoiler. -you can buy a caterham RHD or LHD. LHD are usually more expensive
@Mr Whippy : that's a good question, i have no idea if you can choose the axle type. I did have a live axle on the car, which is not the best choice, but would be nice to see how it handles ingame.
@NightEye87 : thanks for the comments! i do indeed like these observations i fixed the rear wheel arch, you can see on the second post. As for the textures, don't get too attached, it's only vray for now and i will probably struggle to get a nice result once in the game!!

Great to see someone working on a new Caterham since the other one seems dead! Keep it up

Hello there.
It's time to do the neeews!
A couple pictures will do that just well. After 4 hours struggling tonight. The time keeps passing me by...

And now is the time where i ask for help
I left 3dsmax and my safe zone and went to a dark unknown road... ksEditor.
As you can see, i managed to export a basic model into the game. (i kept it simple for now)
I can't launch a race though (i guess it's missing too many things suspensions etc.), but the showroom works.

I read the PDF included in the sdk files, i watched few tutorial online, but it's still a little blurry.
So i guess i got the basics right. Scale of the scene, doing hierarchy, naming, although the blurry alloys are showing, so maybe i didn't do that well?! And where did the seats go...

I took the sample car fbx with all the dummies in the sdk folder.

and linked everything before importing to the editor

I duplicated the caterham academy mod for now, and renamed it, as well as the ui file, car.ini lods etc. to match the new name. It doesn't show any error so far. (*success kid*)

I have questions regarding how to proceed. Maybe you have a link to a good tutorial, written or video, that would advise me!
I guess the general message i'm trying to send is...

boy it's already eleven.
Thanks in advance for your time...
Last edited: Aug 22, 2016
You must log in or register to reply here.

A
Cars Modification of original car (no animation)