Will a run-off ruin Parabolica? 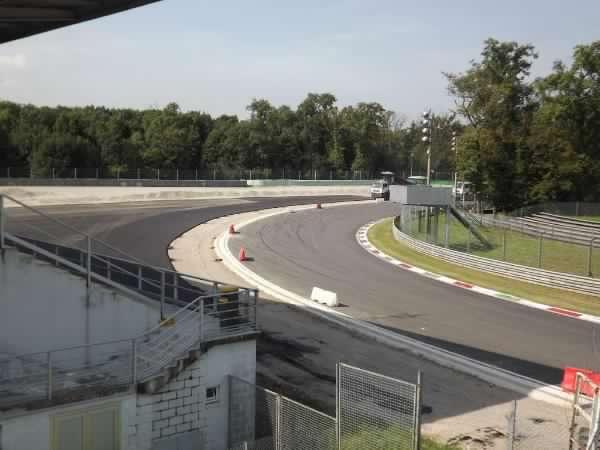 Monza's famous parabolica corner has had it's gravel trap filled in with tarmac, is this the end of the world?

A majority of fans are outraged at the addition of a tarmac run-off on the outside of the corner, saying that the change removes any challenge from the corner. Many say that Bernie is to blame, but that doesn't seem to be the case.

The change is reportedly due to the return of World SBK to Monza in 2015. Tarmac run-offs are safer for motorcycle racers, as they can slide to a halt rather than be thrown off of the bike. If this is the case, then FIM is to blame - not the FIA.

The topic has been a talking point of F1 fans in this somewhat dull period of the year. What do you think about the alteration in Monza? 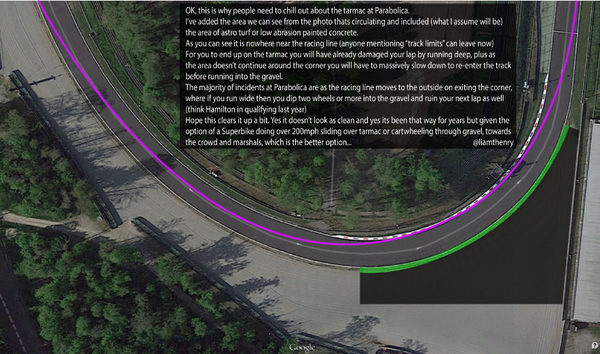 changing the dynamic of the most famous section of one of the most famous, historic race tracks in the world to accommodate a second-tier motorbike league is probably not fun a fun thing to deal with from a PR standpoint.
C

As long as the exit of the corner isn't tarmaced and there is a gap between runoff and asphalt I don't really see a problem with it. With a gap they can't use the run-off for being pushed off the track and overtaking and the only other time you come close to the outside of the corner is on the exit. If you brake too late and hit that gap trying to turn in you're going to be in all sorts of a mess. Assuming there will be a gap between asphalt and run-off.

It's not as punishing anymore but because it runs on to a long straight, it will still result in a big loss of time.

Now, if it was Lesmo 1 then it would be a much bigger disappointment for me.

A straight like Autodromo Nazionale di Monza or Shanghai International Circuit. A run off area will increase the chance of an airborne crash. It will significantly ruin the Parabolica.

Staff
Premium
These run-offs were there for a good reason. To slow down a car that ran wide.

Lets see what happens at the next MotoGP / SBK race when a driver gets a highsider before the braking zone and instead of landing in the sand hits the asphalt at high speed.

Whats next? Extra chicanes because the topspeed is becoming too high?

yusupov said:
changing the dynamic of the most famous section of one of the most famous, historic race tracks in the world to accommodate a second-tier motorbike league is probably not fun a fun thing to deal with from a PR standpoint.
Click to expand...

I don't get what all the fuzz is about, it won't really change anything.

Staff
Premium
Great image, thanks for sharing. Thats indeed less serious than the original one we saw first.

The SBK series has raced at Monza for years without the need to add tarmac at the Parabolica, however it was decided back in January to add more run-off: http://www.worldsbk.com/en/news/2014/FIM Dorna WSBK visit at Monza

What I find funny is the lack of run-off has never been a major issue; the tyres the series use were cause for concern a few years ago when said tyres fell apart due to high track temperatures - a bit worrying when the top speeds were above 340 km/h. The series also had trouble with rain tyres at Monza too - both more likely causes as to why an SBK round wasn't held at Monza this year.

It's just sad for F1 that's all. I could write a long-winded post about how there isn't enough risk in F1 in a lot of instances, but I might as well share a blog post I wrote only 2-3 weeks ago about this - http://insilicof1.wordpress.com/2014/08/01/why-formula-one-needs-more-risk/
Y

Peter Stokman said:
second tier lmao sure u never visited SBK more action than dull f1 cars who are driving in a line needing buttons to pass and sounds like my electric bicycle
Click to expand...

second-tier, as in literally...and no motogp is not on the same level as f1, anyway, sorry dude.

To be honest it won't change anything.

You see one, maybe two cars in the gravel there on a GP weekend and it's as a result of a screw-up.

It is a slight shame, but the F1 cars would've been slower through that corner this year anyway with the lower downforce levels.
Maybe the asphalt will encourage cars to still push harder!

William White said:
A straight like Autodromo Nazionale di Monza or Shanghai International Circuit. A run off area will increase the chance of an airborne crash. It will significantly ruin the Parabolica.
Click to expand...

No it won't.
If anything gravel traps can be more dangerous because cars can get pinched in them, and subsequently flip, especially if they enter them sideways.


This whole Tarmac thing is nothing.
If they were to Tarmac the entire area around Parabolica, then sure it would be bad, but that's not what's happening.
M

It could save the race's interest but I totally agree with @Bram Hengeveld that the sand would provide a safer landing for the biker, especially.

Mikko Lashay said:
It could save the race's interest but I totally agree with @Bram Hengeveld that the sand would provide a safer landing for the biker, especially.
Click to expand...

It's actually safer for the bikers to just skid along the asphalt because the sand makes them tumble all over the place. It may be harder on Impact but with most crashes you see they just skid along for a while and get back up on their feet.

I don't see any problem with it, I'd have more faith is modern race brakes ability to slow a car or bike down than I would in sand. Other than that it makes no difference to a race or lap times, your still going to be throwing away your lap if you go off there.

The whole tarmac run off is evil/dangerous thing is just silly to me. Ive seen races where cars are beached in gravel and get t-boned by other cars as a result, gravel is no safer than run off especially when the run off area is huge with a smaller gravel trap at the end (as is so often the case).

Its all Jackie Stewarts fault. If he hadnt had his safety crusade we would be able to enjoy racing with drivers that had no helmets or seatbelts and tracks without railings and tyre walls. Where we could stand at the edge of the track and watch as drivers jumped out of the car to try to save their lives as the car carried on to wipe out spectators. String him up i say, string him up.

From the shots of the run off I have seen, the transition from racing surface to run off looks so bumpy, it would unsettle the car too much for any advantage in time. Considering this, and that it will improve safety, in my honest opinion this was the right call.

I will admit though, when I saw the title, I was ready to run around like the sky was falling