War of RD 7 - The Battle for Hextralia

After a long (really long), epic (meh....) Battle for the lands of Hexagistan, a new land has been discovered. Survivors of the great (maybe just...average?) war have fled the war-torn wasteland of Hexagistan to seek out the newly found land of Hextralia. Its still full of hexes(6 stunning angles!), and our greedy warlords want it all to themselves... 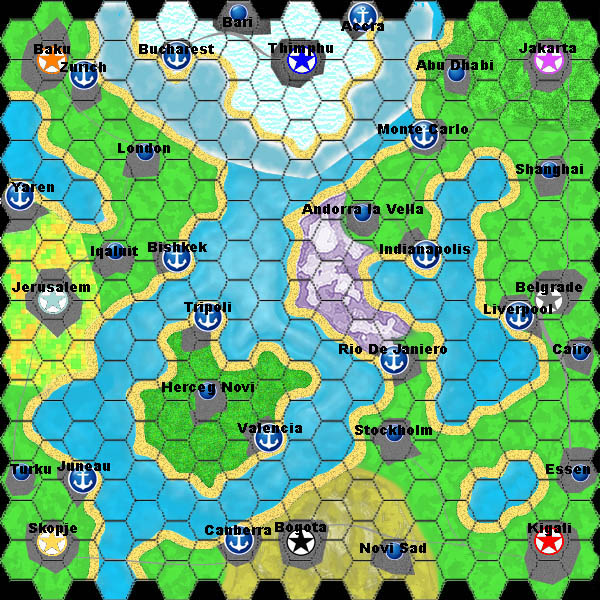 ​
All people who sign up are declared military governor of one of the 8 nations of Hextralia. You get to move units around the board, owning rural areas (empty), towns (dot), ports (anchor) and capital cities (star). To win the game, you must take over all 8 capital cities. You move around with separate units, with manpowers that can have values between 1 and 99.

How do I grow my empire?
When you start, there is a small unit on your capital which can move a maximum of two hexes away from its start point. Moving to somewhere on the edge of your territory not only conquers the hex you land in, but also all the rural areas touching the hex you are in. Towns, ports and capital cities can only be gained by landing on them. Each unit can only move once in a go, and you have a maximum of 5 moves when you have more than 5 units.

How do I use water?
All units can go on water. Land based armies can become sea based navies. You can only get on the water at a port, but you can leave the water anywhere you like. Water is unclaimable, so does not contribute to the size of your empire.

How do my units grow?
At the end of each turn, the size of your empire is calculated. Towns gain 5 men and capitals gain 10. Added to these is extra units calculated from the amount of rural areas you own and ports you own. Towns and capitals are the only places where new units can be trained, and the total is split over them all. You can also merge units on land. If you move one unit onto another unit, they become one more powerful unit which is the sum of their manpower. If they total more than the maximum (99), then the rest is left in the previous spot. Merged units cannot move after merging, but the spare can move if it hasn't already. Units cannot be merged in water, and units cannot also be split, so be sure when you merge.

How do I battle?
You can take empty cities or rural areas in someone's territory as easily as if they are unclaimed. However, if you decide to battle an opponent, the unit with the larger manpower wins the battle, but loses some men. (If a 65 attacked a 42, then the 65 would be reduced to 23). If both have the same manpower, the defending unit wins the battle, and is left with 1.

How do I lose the game?
This is a better question than how do I win. No matter how big your army is, or how many other capital cities you own, if your main capital is defeated, you are out and your land goes to the conqueror.

What do I do each turn?
Each turn, you can order your units to move. Each unit will be given a letter, plus the manpower (eg B34) and given the same colour as your nation. There are a certain number orders you can give to move the unit, as detailed below, assuming your unit is in the yellow hex.​ 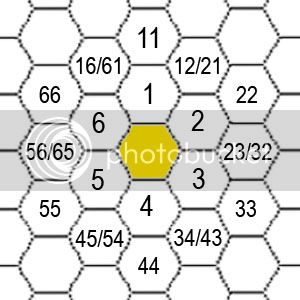 ​
Where it has a forward slash (/), it means you can say either number. Each turn, PM me the moves you want to do. I'll wait until everyone has posted before moving on. Moves will be done in the order they are posted.


Are there any other orders I can give?
There are two more. Giving the Capitulate or Surrender order ceases your time in the game. All land you own becomes unclaimed. The other order you can give is Sign a Pact. To sign a pact, you need to have agreed to do this with another army. You can only sign a pact once, and they are only with one army. I will need confirmation from both users who sign the pact. What is different about just deciding to not attack someone and signing a pact is that where you would automatically take over some land from the other army by moving next to it, you can't with a pacted nation. To break the pact, move a unit onto the land they own at the start of the turn. If you both move and accidentally land on some that has been gained during that turn, the pact will not be broken. Pacts must be declared made privately (PM or otherwise), but if a pact breaks, it will be public.

Fine Tuning
There are some smaller rules that need expanding on, or made visible.
Moving on and off Water: You can move off water where ever you like, but you can only move to the bit of land touching the water, no further inland on that move. You cannot move on and off wtaer in one go. If there is one bit of water between the port and another bit of land (eg move of 55 would take you straight across the water onto land), you have to do them in 2 separate rounds.
Moving through armies and towns: You cannot pass through an army or a town. If you want to move (for example) 22, but there is an army or town on space 2, you stop on space 2. However, if you moved 23, because it is the same as 32, that is acceptable.

Is it possible to join mid game?
It is possible, but only under specific circumstances. When an Empire (detailed below) loses its main capital, the provinces are then liberated. When the province is liberated, new users can join as the leader of that nation. The capital and the unoccupied rural areas touching the capital move to the new leader. If no one is chosen in the first round afterwards, they just become unclaimed lands and cannot be taken over by another user.

​
Armies
So, which army will you choose to lead? Each nation can be in 3 separate states

That was pretty quick I reserved Bluetan for Jim as well

The banner came out ok actually

I guess I could make a return with Amberbaijan
M

I'll put myself as a reserve, if someone drops out

Just to explain the terrains.

Water
Default Water: The blue stuff
Icecap: The whiter bit at the north.
Bridges: Grey roads going over the water between Skopje and Canberra

Despite the variation, they are just for show, so have no effect on the game whatsoever, even the bridges and ice. They just need to be treated as normal water tiles.

I would like to remain in Switzerland for this round.

Misc RainFX for London (City of) Street Circuit by (unknown)

This is the end. Goodbye SIM-Racing. Goodbye rfactor 2.

M
I have to do something to increase FOV width

Comparison shot for the Shader guy