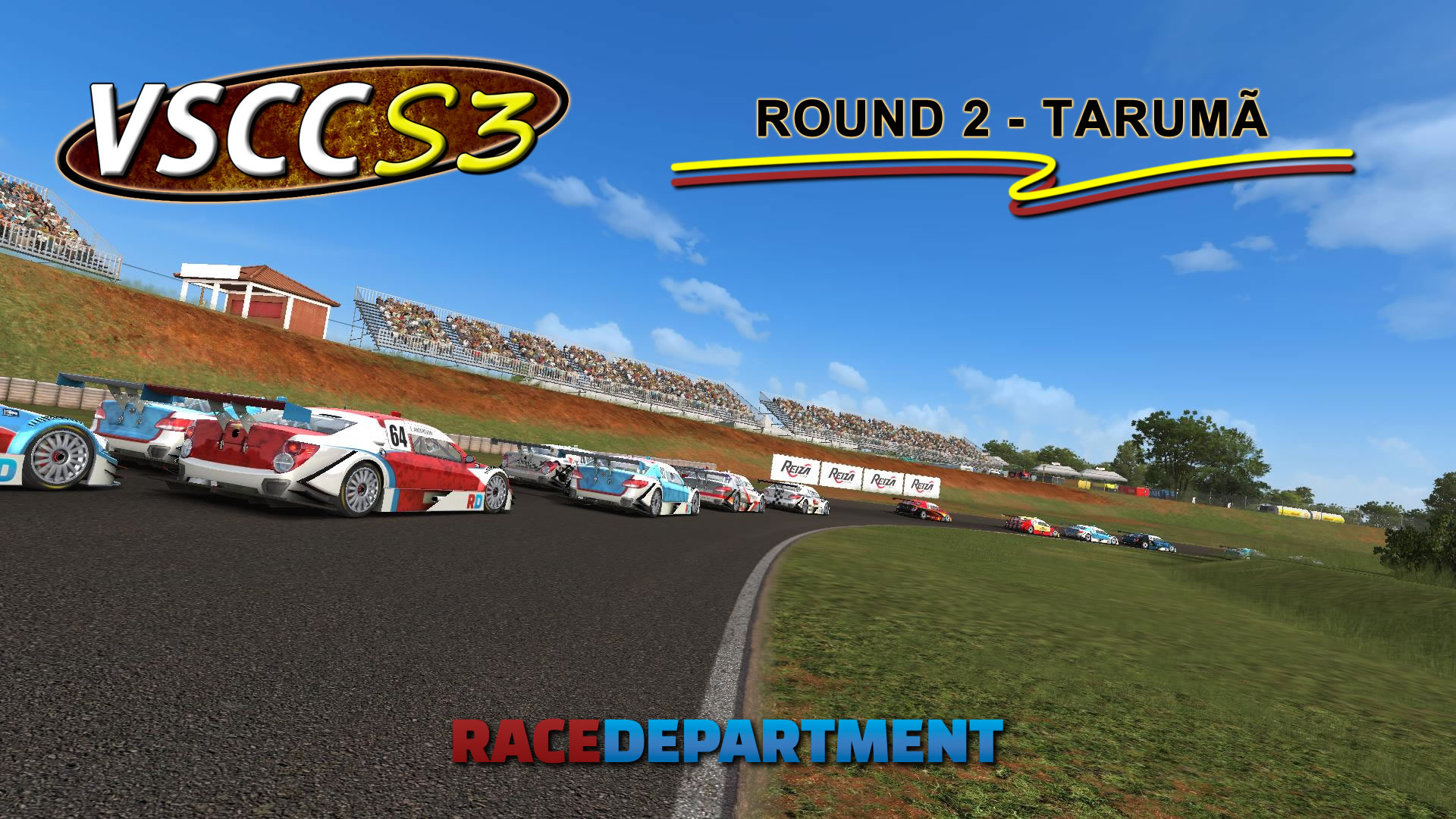 Neto Nascimento crosses the finish line just 1 second ahead of Risto Kappet to reduce the gap at the top of the championship to 3 points.

Promoted to Server 1 and ready to take the fight to the leaders, it was Risto Kappet who, despite later being deducted 5 points for exceeding track limits in qualifying, started from pole position on race day at Tarumã. It is a small run from the start line to turn 1, making Neto Nascimento's start even more impressive - he soared away from his grid slot perfectly taking the lead around the outside even before they had reached turn 1. 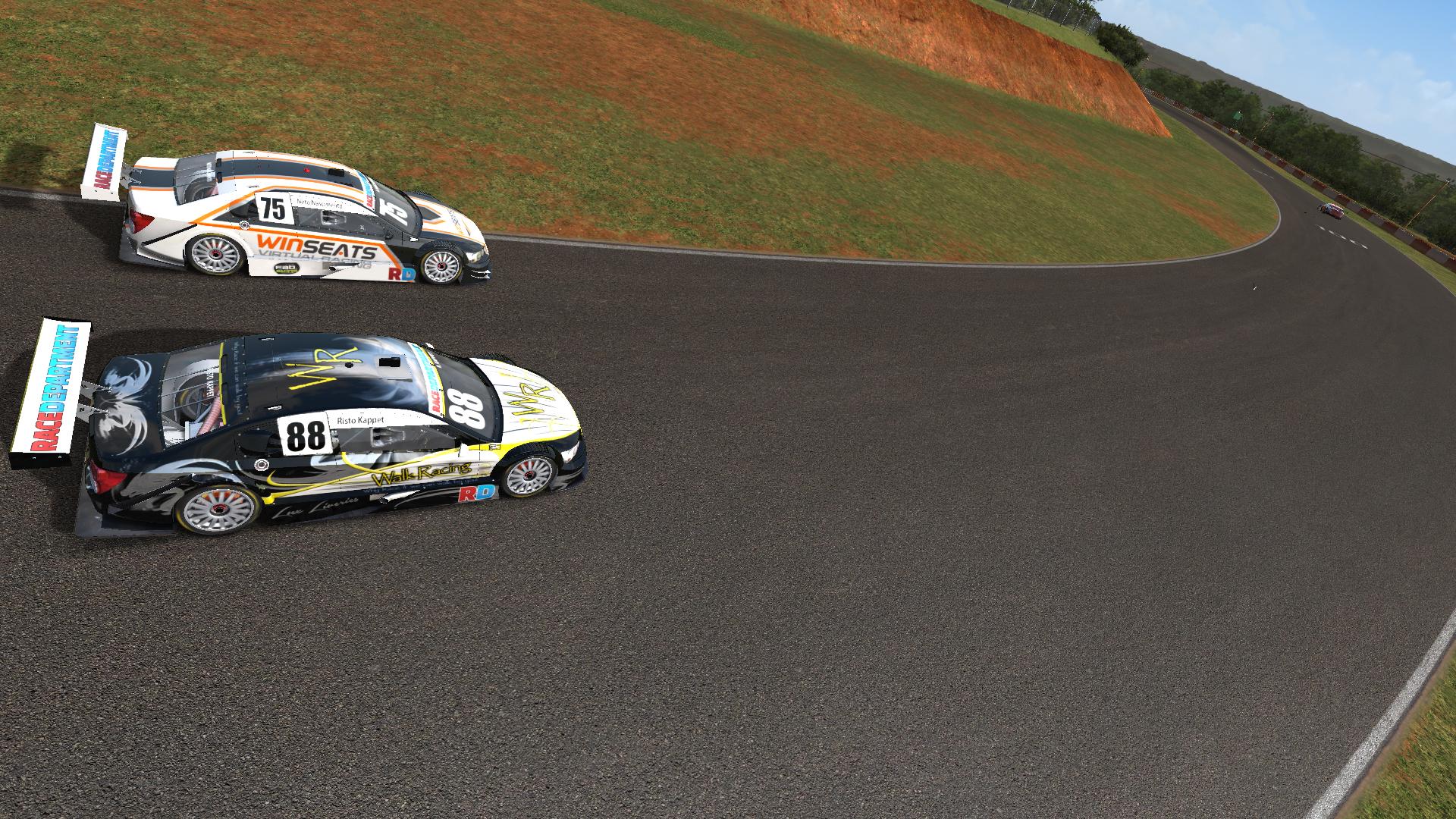 Kappet and Nascimento, inseparable for most of the race.​
They say you only need 2 cars to have a race, and that has never been more true than Risto Kappet and Neto Nascimento. For most of the race, you could have thrown a blanket over the two leaders, matching each other's pace almost as if they were one 8-wheeled car. The pressure was on, and just the slightest mistake from Nascimento in the final turn lost him just enough momentum to lose the lead. Kappet back ahead.

Further back, Guus Verver was leading a train of cars until 8 minutes in to the race GS Racing's Sergio Junior pulled through to take 3rd. It was a good time for his parent team GhostSpeed as well, with Miguel Lopez making a pass on Austin Ogonoski for 5th. A few minutes later, Ogonoski would make a small contact on the back of Lopez. The resulting loss of time would cost Ogonoski 6th place to Jake Cooper. Ogonoski would regather himself well and take the place back with 26 minutes remaining.

Back at the front, in a battle of their own, Nascimento retook the lead with about 35 minutes left to run. Possibly aided by the push-to-pass system, he made an aggressive but fair move around the outside of Kappet going into the fast turn 1.

Fábio Assunção then retired in what must be the most spectacular of crashes so far in the VSCC by a country mile. Being grateful no doubt that this was a simulation rather than a real-world accident, he lost control on the exit of Curva do Laço, hit the grassy hill to the side of the track at high speed and flipped his car upside down and over the top of cars on the other side. 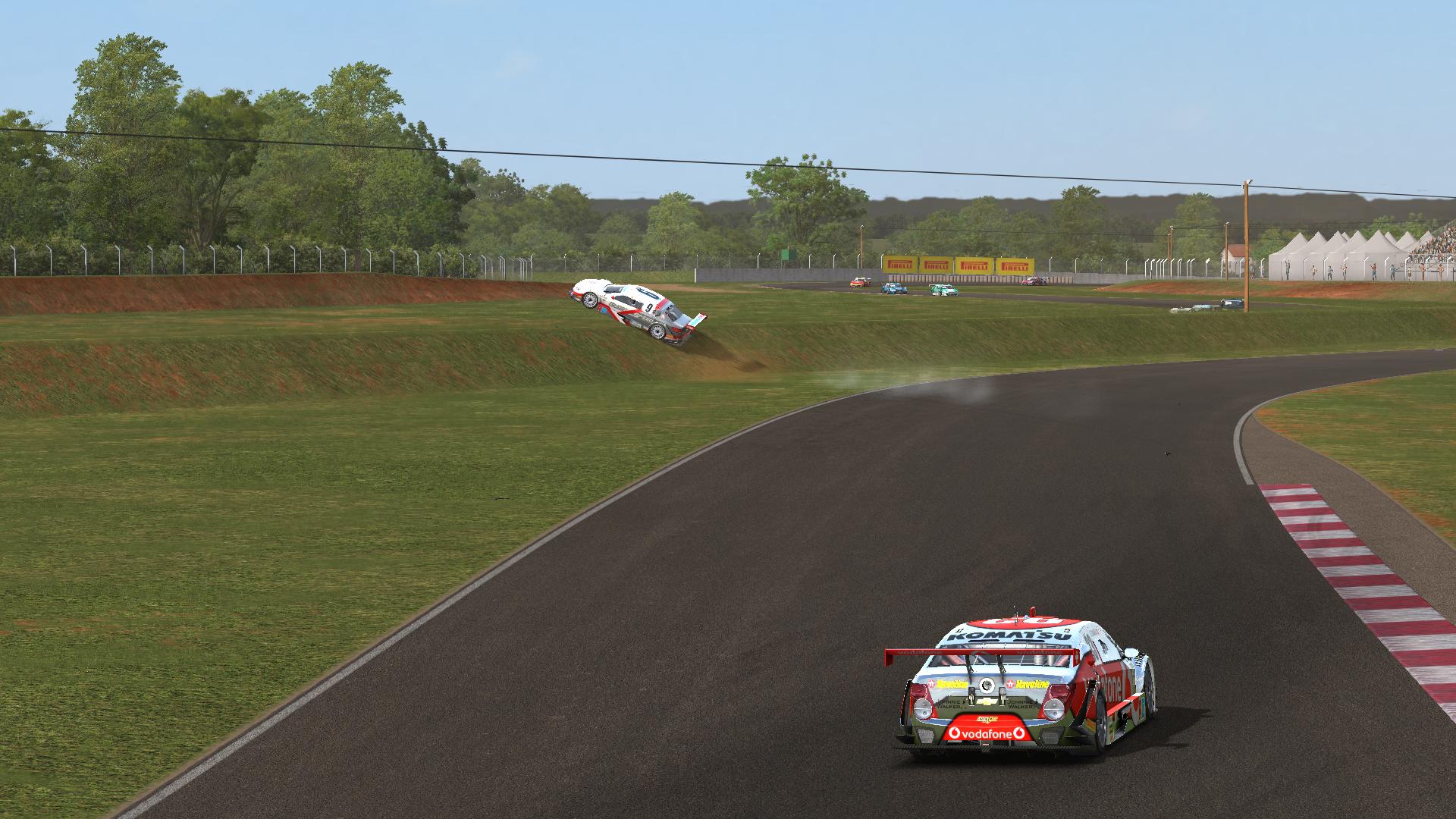 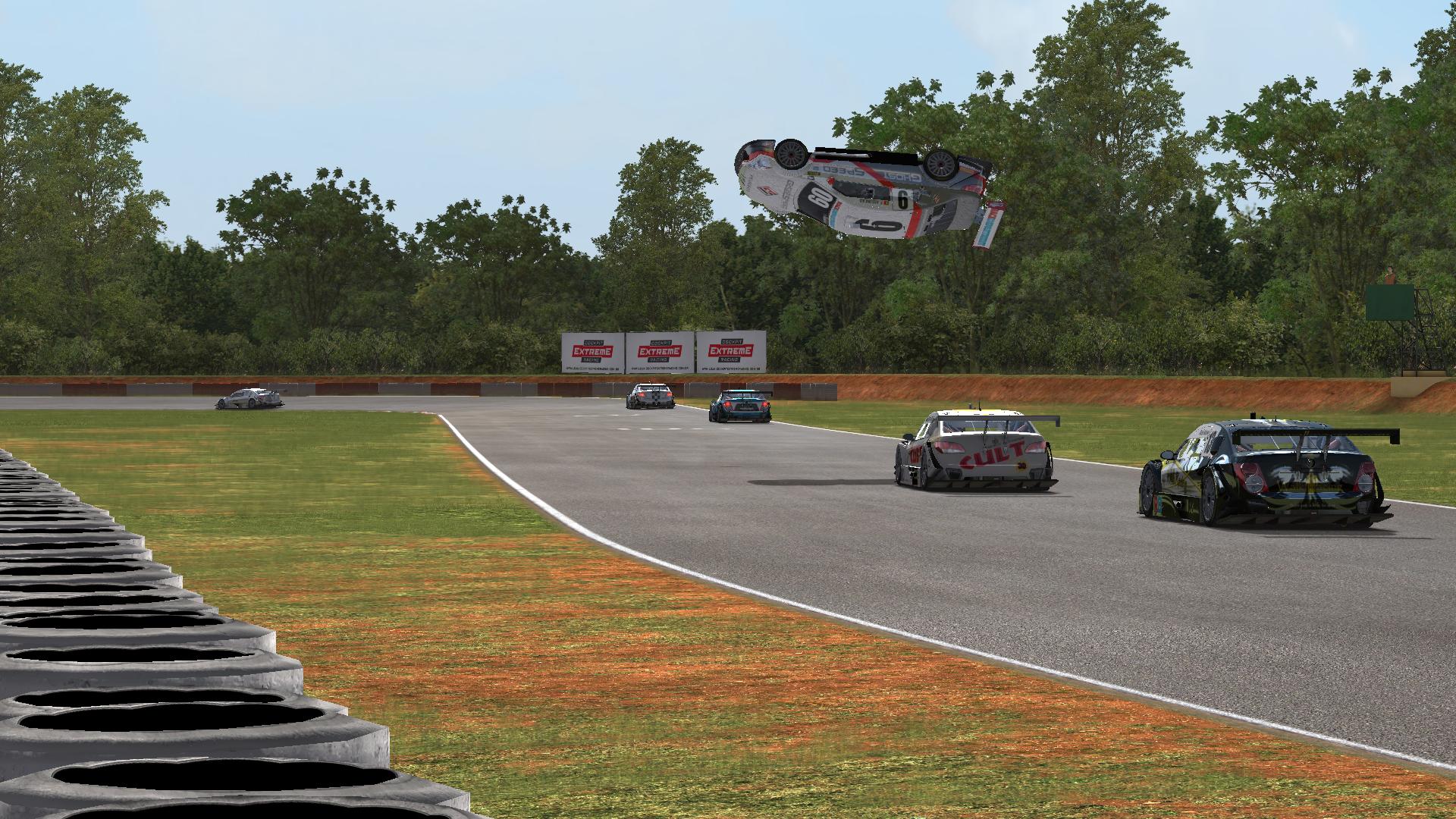 ...ending his race in the most spectacular fashion.​
Neto Nascimento gave a good display of defensive driving, holding up under immense pressure from Kappet who must have had slightly better tyres at this point, having not locked up nearly as much. And now the extra pressure of passing the first back-markers was approaching. As it happened, however, the back markers fortunately did not have a say in the lead battle, keeping well clear and not holding them up.

At the half-way point, the battle for the lead was down to the pit crews, with the leaders pitting at the same time. Unlike Cascavel, both drivers opted for new tyres. They would exit the pits in the same order they'd entered, now in 16th and 18th spot respectively, but it was immediately clear Nascimento had pulled out a few seconds.

Guus Verver would pit later than most other drivers, opting to take only fuel and stick to the same set of tyres. This same strategy is the one that ultimately helped him to win round 1, so it was no real surprise he tried it again here. This time, however, it wouldn't pay off as he just couldn't find a pace high enough to stop Neto Nascimento and Risto Kappet catch up with about 10 minutes to go. He put up a good fight, but it was inevitable that Nascimento would make the pass. There were definitely no team orders at Walk Racing with Risto Kappet having to work hard to get through, and some small contact was made between the two.

The race taken by Nascimento then, his pit stop gaining him a valuable cushion to Kappet, and new tyres clearly being the better strategy.

Server 2 Round Up
Tal Segal, having been relegated from Server 1 last week after an unfortunate crash early in the race, took the win in server 2. The Israeli said, in his usual fluent style, "Yeah I think obviously we need to look at the bright side. For sure winning in the second server with such good competition is yeah a notable achievement, but obviously this is still just damage mitigation from the first race. So yeah, content with the result, and looking forward to rejoining my teammate Frank [van Oeveren] and yeah fight for more points for sure."

Allan Groth would finish 2nd, and Andrew Harper 3rd, the only other drivers to finish on the lead lap. 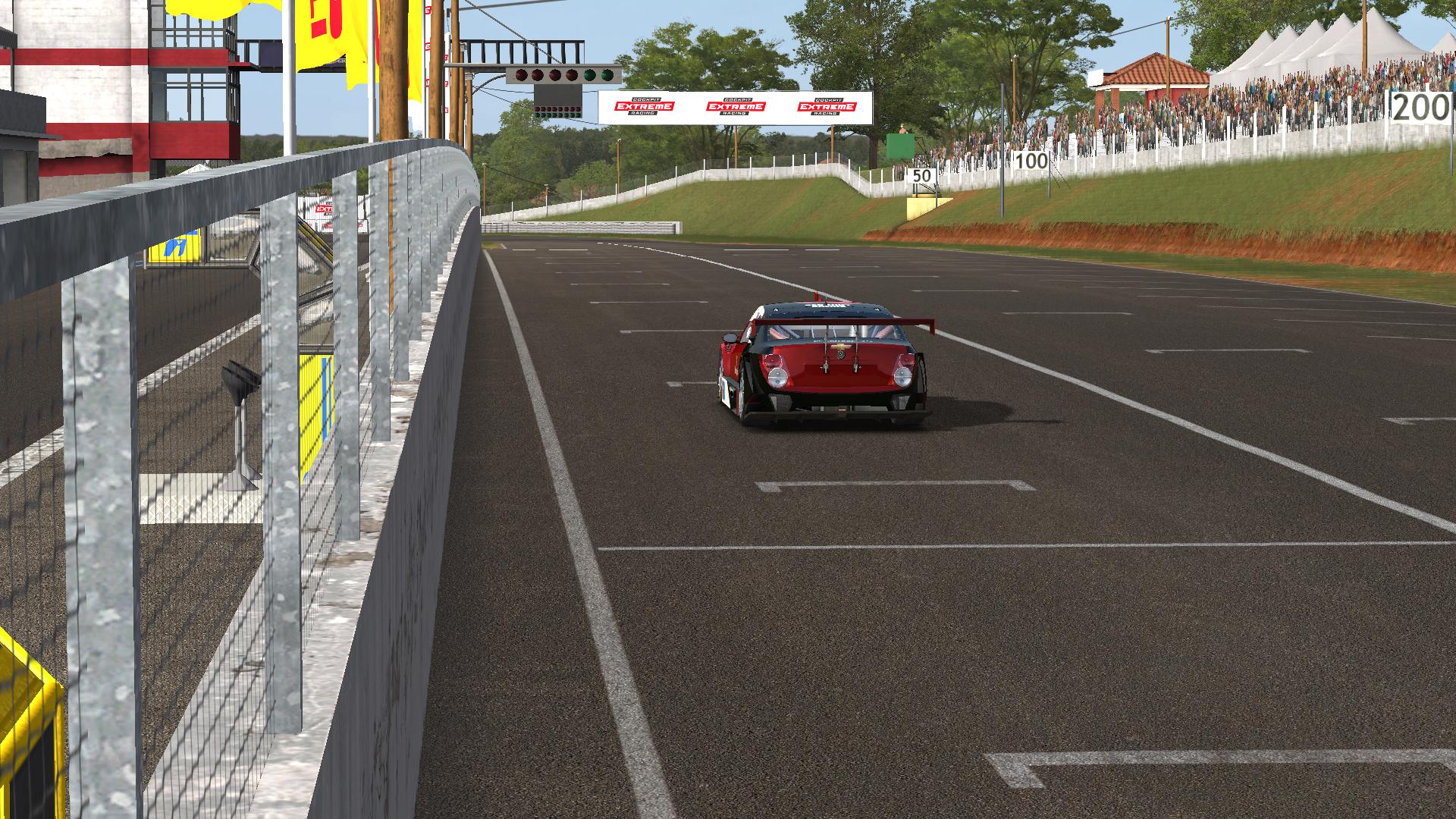 Tal Segal celebrates his Server 2 "win" and promotion to Server 1. 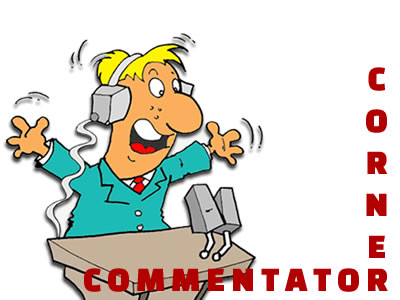 As the VSCC tables start to take shape, Thomas Hinss looks back at the last round, and explains what he'll be keeping an eye out for in the next round.

Thomas Hinss: This was quite an exciting round to watch as the racing was very close for most of the race. I think the surprise for me was Nascimento being able to take such an impressive win, keeping in mind he was in a battle with Kappet for most of the race. Despite the constant pressure he still managed to hold on and take the win, a big statement to GhostSpeed and Walk. With yet more solid results for Walk they look strong in the constructors, something which I will be watching closely to see if GhostSpeed can challenge them for throughout the remainder of the season.

I'm very much looking forward to the next round at Goiânia, as it's really going to be a question of can GhostSpeed challenge the pace and consistency of Walk. It will also be a round where I will be looking to see if Nascimento can once again be up at the front fighting for another win.

If you missed it, re-live the intense battle here:

Kappet has thrown down the gauntlet, and round 3 at Goiânia is set to be another fantastic hard-fought battle at the top. Could we see 3 different winners in 3 races? Find out on Saturday 23rd of May live and exclusively on RaceDepartment! Grab the spotter guide here.

What are your thoughts on the VSCC so far? What are you most looking forward to in round 3? Who are you rooting for? Have any questions for the drivers? Let us know in the comments below!
Last edited by a moderator: May 21, 2015
Reactions: Risto Kappet, Ariciuc Razvan and Davy Vandevenne 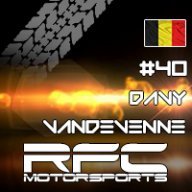