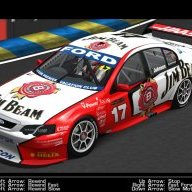 This is the Norton Hornets Nissan of Michael Caruso from the 2014 V8 Supercars season. Included are several liveries that he ran across the course of the year, and I've made it match Moffat's Norton car as much as possible from the same year that appears on the V8SCorsa sit.
This is for the V8SCorsa mod for Assetto Corsa as found here:
http://v8scorsa.weebly.com/