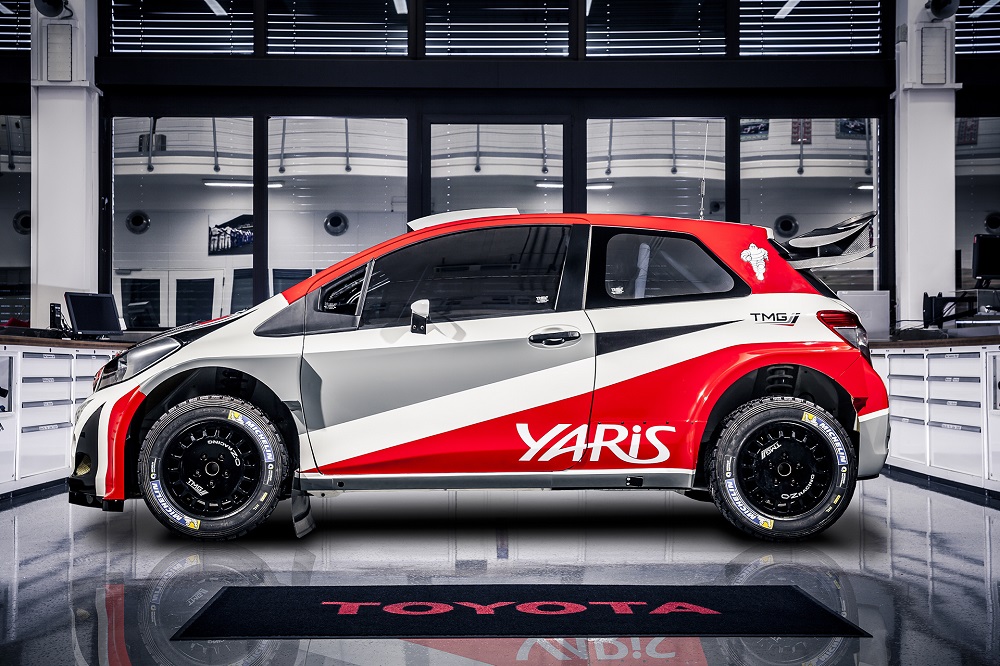 The announcement of a return to the FIA World Rally Championship in 2017 headlined the list of announcements made at Toyota Motor Corporation's press conference on motorsports activities in Tokyo, held Friday.

Beginning in 2017, Toyota will launch a full-on factory assault on the WRC with the Yaris WRC, based upon the newest generation of the popular sub-compact car. The Yaris WRC was revealed for the first time to the public in Tokyo, powered by its regulation 1.6 liter, four-cylinder turbo engine and perched on Michelin tyres.

Toyota chairman and Akio Toyoda announced Toyota's return at the top of the press conference, saying: "When I was in Finland last year, many fans asked me when Toyota would return to the WRC. People talked about Toyota's history in the WRC. I was filled with surprise and gratitude that so many people still remembered. I started to feel strongly that we must return while people still remember. We are doing this to make better cars, to make people smile."

"We decided to return to the WRC and we plan to start competition again in 2017. Last time we competed was in 1999, that makes me think we are not announcing a return... but perhaps a start. We must begin again from scratch and carefully prepare both team and cars."

Toyoda dedicated the revival of the Toyota WRC team to the memory of Bjorn Waldegard, the former WRC champion (1979) and longtime Toyota driver who passed away in August.

Stephane Sarrazin, who drives for Toyota in the WEC and has extensive rallying experience driving for Subaru and Peugeot, will serve as the main test driver of the Yaris as Toyota Motorsport GmbH extensively develops its new challenger over the next two years leading up to their return after a lengthy hiatus from the sport of nearly eighteen years. Sarrazin will share testing duties with Finnish veteran Sebastian Lindholm and French prospect Eric Camilli.

Toyota previously competed in the WRC until 1999, winning three manufacturers' championships (1993-94, 1999) and four Drivers' Championships between legendary drivers Carlos Sainz (1990, 1992), Juha Kankkunen (1993), and Didier Auriol (1994). They are best remembered for their distinctive Castrol-liveried entries in the 1990s, including the infamous Toyota Celica GT-Four model ST205, which was banned in its debut season in 1995 due to an illegal turbo system. They won their last Manufacturers' Championship in 1999 with a WRC-spec Toyota Corolla, before withdrawing to focus on Formula One. In total, Toyota has won a total of 43 WRC events, and will seek to add to that total beginning in 2017.

Only minor changes will be reflected in Toyota's 2015 campaign in the FIA World Endurance Championship. The all-wheel drive, 1000-horsepower TS040 Hybrid prototype will again contest the 2015 World Endurance Championship and the 2015 24 Hours of Le Mans in a two-car effort. Sebastien Buemi and Anthony Davidson, the reigning World Endurance Drivers' Champions, will be joined in the #1 Toyota TS040 by last year's Le Mans pole sitter Kazuki Nakajima, who for the very first time will contest all eight rounds on the WEC calendar in the aim of becoming the first Japanese driver to win the Drivers' Championship.

The #2 Toyota prototype will again be driven by veteran drivers Alexander Wurz and Stephane Sarrazin, while Nicolas Lapierre will be replaced by British driver Mike Conway, who contested three races for Toyota last season while primarily competing in the Verizon IndyCar Series as a road and street course specialist for Ed Carpenter Racing. This year, Conway will be a full-time WEC competitor, departing IndyCar after six seasons.

The Japanese Championship Super Formula will recieve a massive boost with the addition of Kamui Kobayashi, the popular Formula One veteran who will debut in the series next year driving for Kygnus Sunoco Team LeMans in their familiar blue and gold livery. Kobayashi is one of only three Japanese drivers to record a podium finish in Formula One, and the 28-year-old former Sauber, AF Corse, and Caterham driver will return to the Toyota racing family for the first time since his brief stint at Toyota F1 in late 2009. His teammate will be 20-year-old phenom Ryo Hirakawa, already entering his third season in the category.

Within Toyota's stable of Super Formula competitors, Petronas Team TOM's will retain the world-class driver lineup of two-time and reigning Japanese Champion Kazuki Nakajima, and three-time Le Mans 24 Hours winner Andre Lotterer, who was Japanese Champion in 2011. Kondo Racing retains a single-car team with Britain's James Rossiter at the wheel of the Fujifilm-sponsored entry. Another single-car effort is KCMG, who in addition to their successful WEC efforts in the LMP2 class, will continue to field a Dallara SF14/Toyota for young prospect Yuichi Nakayama, a former Japanese Formula 3 Champion. Lenovo Team Impul will partner the hard-charging Brazilian Joao Paulo de Oliveira with 24-year-old Andrea Caldarelli, who will contest his first full Super Formula campaign after just two races last year in relief of an injured Loic Duval and an absent Lotterer. And P.mu Cerumo/INGING team retains its 2014 driver lineup of Hiroaki Ishiura and Yuji Kunimoto.

With the departure of Nakajima and Oliver Jarvis to the World Endurance Championship, there is a major restructuring of the six-car fleet of Lexus RC-Fs competing in the GT500 class of the Autobacs Super GT Series.

Nakajima's place in the #36 Petronas Team TOM's car is taken by Daisuke Ito, winner of the 2007 GT500 Championship alongside former Jordan F1 driver Ralph Firman driving a Honda NSX for Autobacs Racing Team Aguri (ARTA). Ito moves over to partner James Rossiter in the car that won last year's Suzuka 1000km. Ryo Hirakawa will replace Ito alongside Andrea Caldarelli in the second TOM's car, the #37 sponsored by automotive service shop KeePer. Hirakawa ran two races for the Petronas team last year in place of a WEC-bound Nakajima - and together, Hirakawa and Caldarelli will form the youngest driver lineup in the GT500 class.

At ZENT Team Cerumo, three-time Super GT champion Yuji Tachikawa will have a new teammate in Hiroaki Ishiura, who swaps places with 2013 champion and former GP2 Series driver Kohei Hirate. Hirate rejoins Denso Team SARD, where he drove from 2009-10, alongside a new driver to be determined at a later date. Kazuya Oshima and Yuji Kunimoto will stay at Eneos Team LeMans, while Lexus' other former three-time champion Juichi Wakisaka stays at WedsSport Racing Project Bandoh alongside young Yuhi Sekiguchi. The WedsSport team will continue to be the only Lexus team to use Yokohama Advan tyres, the other five teams will stay with Bridgestone. In the GT300 class, the Toyota Prius Hybrid racer built by APR will return once again, with a new driver in Yuichi Nakayama partnering incumbent driver Koki Saga, and Bridgestone replacing Yokohama as tyre supplier.

In addition, Toyota announced the eight-race schedule for the single-make GAZOO Racing 86/BRZ Race series, which will now be split into two series of differing experience levels - a Professional Series, and a Clubman Series for amateur drivers.
You must log in or register to reply here.