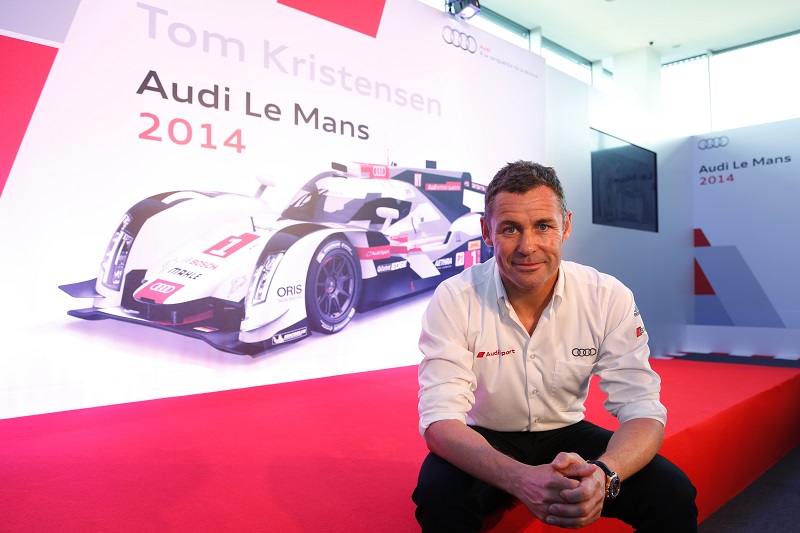 Legendary Danish sportscar racer and nine time Le Mans 24 Hours winner Tom Kristensen announced his retirement from racing at the end of the season this morning. The long time Audi factory driver has won almost everything possible during his sportscar career, although has today decided to end his career after next weekend's 6 Hours of Interlagos World Endurance Championship finale.

Kristensen made this announcement in Copenhagen this morning, with Audi sport boss Dr Wolfgang Ullrich alongside him. Kristensen stated "I have been told that you know when it's time to stop and I have not had that feeling until now.Over the past couple of months, my thoughts of retiring have been stronger, and therefore, it feels right to inform you today that I am retiring from motor racing.I still feel I am in peak physical form and possess the necessary mental toughness both in and outside of the car: it has been important for me to stop while I am still strong and able to deliver top performances at Audi."

Kristensen later also added his reasoning for announcing his retirement before the WEC season finale next weekend was "in order to be able to say a proper goodbye to the sport I love so much at our last race in Brazil." Whilst the Dane had a contract with Audi until the end of next season, he will now instead be an ambassador and mentor to the team, much like team mate Allan McNish's role after his retirement last year. Kristensen finally thanked Audi and said it had been a "privilege driving for the best team and the world's coolest automobile manufacturer for 15 years."

Kristensen will finish an illustrious career which began in single seater racing, where he rose to prominence in Japan as he finished 3rd in the 1995 Japanese F3000 series before switching back to Europe with moderate success in F3000 between 1996 and 1997. His final year of F3000 was also the year of his first Le Mans 24 Hours win in a TWR Porsche, something which sparked a change to sportscars with BMW before joining Audi in 2000.

From here Kristensen and Audi dominated sportscar racing as Kristensen went on to win a further 8 Le Mans 24 Hours, 6 Sebring 12 Hours, 1 Petit Le Mans, 1 American Le Mans series title and a World Endurance Championship over the next 15 years, alongside taking victories in a diverse range of cars and series with everything from Honda British Touring Car Championship wins to DTM victories with Audi and Le Mans honors with Bentley.

Audi will have a very tough job to replace the great Dane Tom Kristensen in the Number 1 Audi R18 TDI, although plenty of top line drivers will be sending in their applications to partner Loic Duval and Lucas Di Grassi next year, as Audi aims to defend it's Le Mans 24 Hours victory and reclaim it's World Endurance title from Toyota. What are your thoughts on the news of Kristensen's retirement?
M

I didn't happen to follow racing categories in which he performed so haven't actually watched him a lot but in this case numbers speak for themselves. It was two years ago when I first watched him at Race of Champions and gave me the impression of a gentleman. All the best for him in his new life and hope he made the right decision.

Ricardo Umans said:
Dayum, was hoping for victory 10 in next years 24h :o
Click to expand...

It was a shame that the turbo problem cost him the lead and a chance to win this year, although I didn't saw that part.

Congratulations to Tom on a wonderful career in a variety of series/vehicles. A true champion.

Jenson may be looking for a seat!

A legend in our time. Thank you so very much, Tom.

the 2 "Truth in 24" documentaries really showcased his talent.. was really hoping he would go one more round.

Glad to see he had a healthy, successful career!
You must log in or register to reply here.