The War of RD 2 - The Fall of Rosspire

After his total victory, Ross and most of his important men gave themselves into drinking, playing and women. They all forgot about their country. And as a result, other warlords recovered their power. Ross's lands lost one by one. Some of them taken by revolting peasents, some by rival warlords. The 2nd Big War of RD is upon us!!!!..... 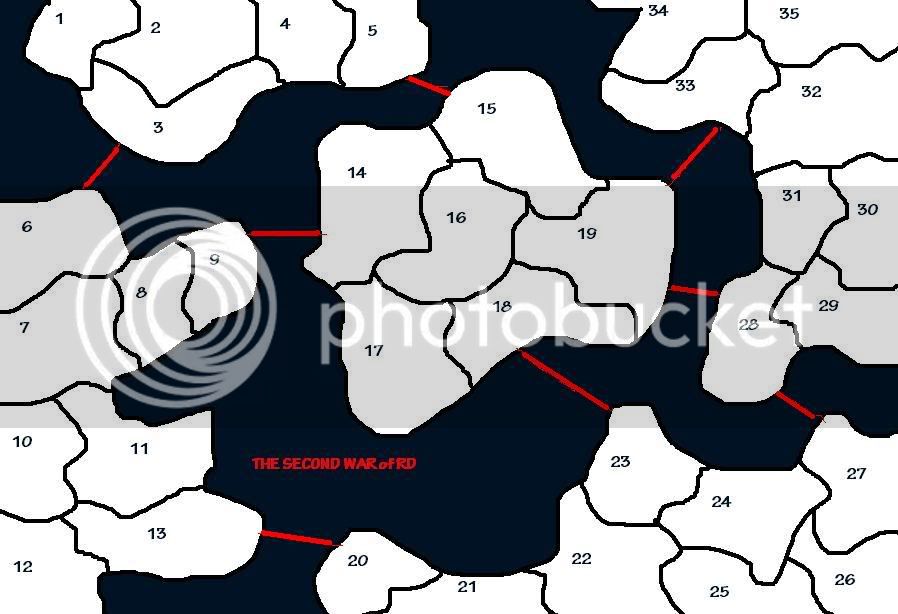 Game advances in 3 days ( Or we can change it if you want ) . First of all, after you sign up. I will randomize and give you a land. Lands are showed with numbers on them.

Let's say in randomization you got land 5. When your turn comes you will use your action points. What is action point ? This points let you make a move, there are many moves you can do :

When a new turn starts, you will PM me what you want to do with your action points. For example " Attack to Land 11 " or " Defend the Land 4 " or " Spy on Bram's Army " . You can give commands as the numbers of your action point. And if two people selects the same land, they battle with a randomizer I will write the battling names on the list, after randomization, upper one will win.

So i hope you all understood, if not please ask.

I put ver 1 players automaticly, if any of them doesn't want to play, please let me know:neutral:. If more sign ups come, we can increase the number of colors :victory:

YELLOW army for me

And please change the game advance to each week, we will give commands on Monday-Friday, and round will end in Friday midnight UTC. Round reviews will be shown on Saturday, and a new round will began on Sunday

And Dark Red army looked a little like Brown army

And please change the game advance to each week, we will give commands on Monday-Friday, and round will end in Friday midnight UTC. Round reviews will be shown on Saturday, and a new round will began on Sunday

And Dark Red army looked a little like Brown army

i believe one week is a little long, of course we need to hear other warlords's desicion in this :meeting:

Also it is a Dark Red

You know, I'm too busy to run the Internet on weekdays

(The only reason I'm online today is because it's public holiday)

Damn army! I leave them to guard my lands and this happens!!

A week is really too long!! 3 days is perfect!

Omer Said said:
- ATOM BOMB! With 12 action points, you can erase 3 lands from the map. Lands must be neighbored each other of course.

What eejit launches a nuke on land right beside his?

I love the new rules though


- With using 2 action points, you can make an air skirmish ( you can attack to a non neighbored land ) .
Click to expand...

Haha, in their Blue outfits nobody will see my troops descending from the sky

Mark Birney said:
What eejit launches a nuke on land right beside his?

I love the new rules though
Click to expand...

lol he will kill himself. But you can be a cruel warlord which even can sacrifice his own people :shock:


it seems most people are happy with 3 days like me. I believe you can log in at least one time in a 3 days period Resi :nod: .

Time to put my phone browser to the limit then

Also buying a lot of prepaid cards will do

Ok Resi, i hope you will have time mate.

Now we will wait for 5 hours, and i will randomize the lands

So your last chance if you want to sign up folks :thumb:

THE RANDOMIZER GAve YOU these LANDS!!!!

THE GREAT WAR is UPON US!!!

you have 3 days to send me your commands . Good Luck ! :th_wink: 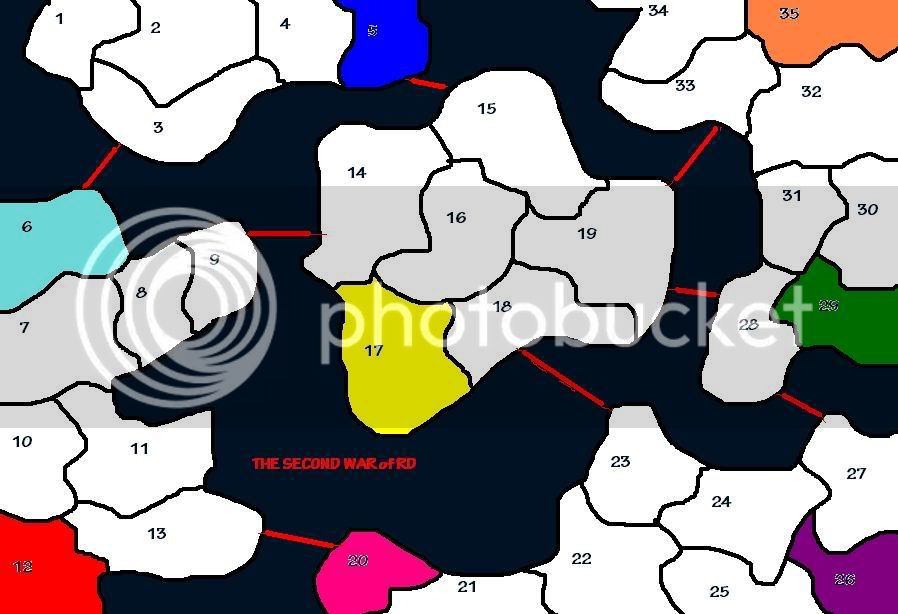 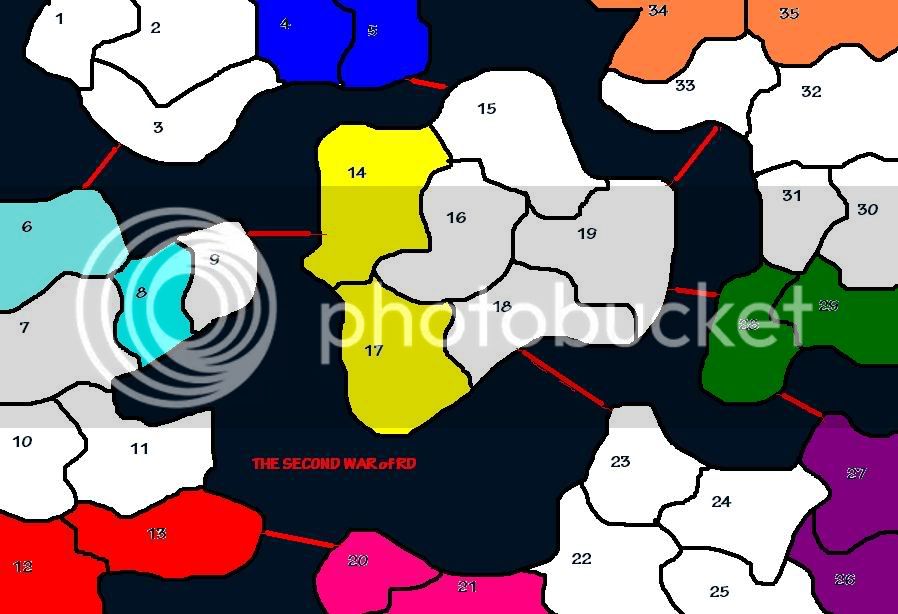 Warlords began to expand their territories...possible conflicts are near :doctor: !!!

So here is a new round begins, everyone has 1 action point. And you have 3 days to command :soldier:

Ok then I will shut up 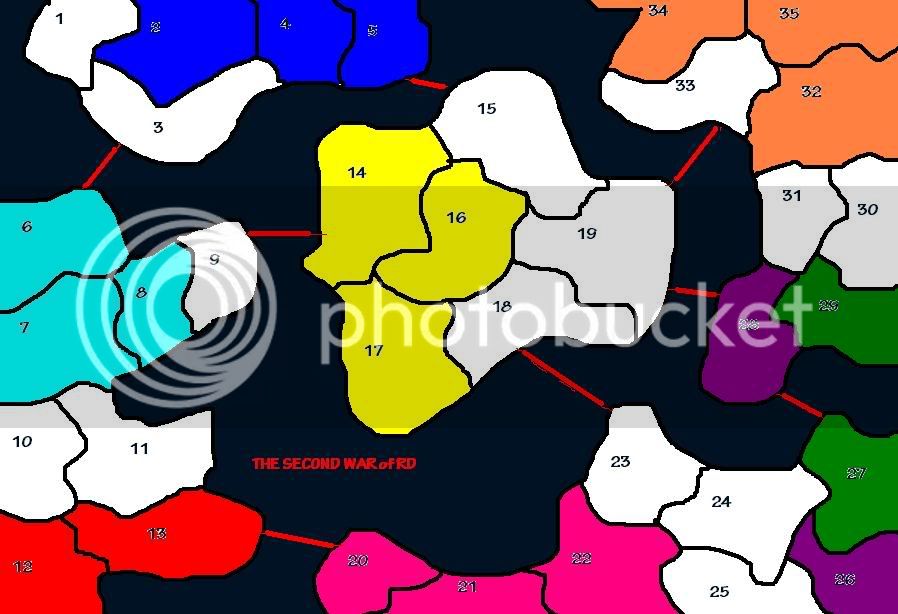 Greens and Purples swapped their lands. A conflict between them is now invitable.

Round 3 beginss!!! All warlords have 1 action point!

You have 3 days to send me your commands :thanks:.

IF you let me know before you go on holiday, or something else happens prevent you logging in. First you should try to find a steward for your army. Another forum member. If you can't do it, i will randomize your neighboring lands to decide where will you attack.

To let you know Ross informed me before he left. So his commands will be randomized. 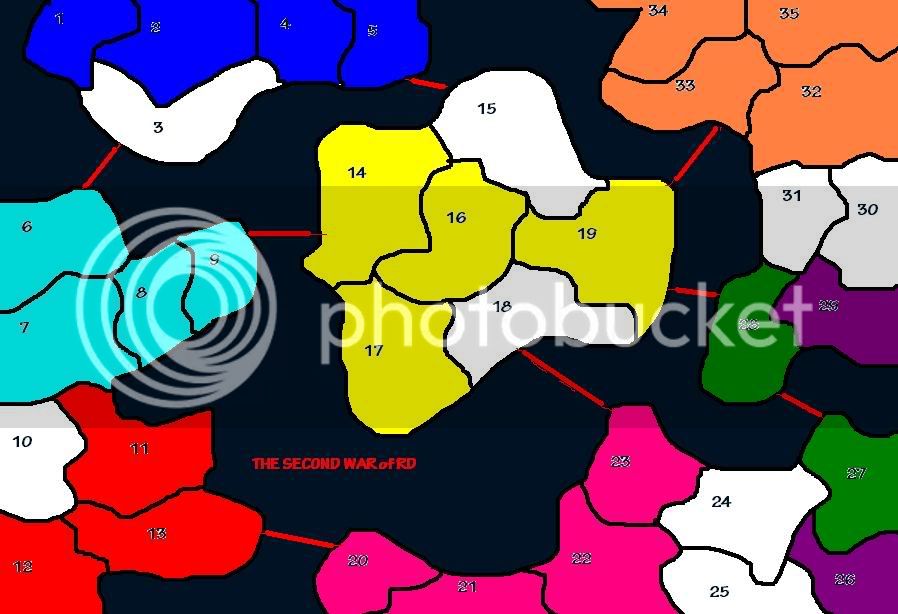 Good Luck all ! And you have 3 days to send me your commands :soldier:

There have been two battles on two different lands. 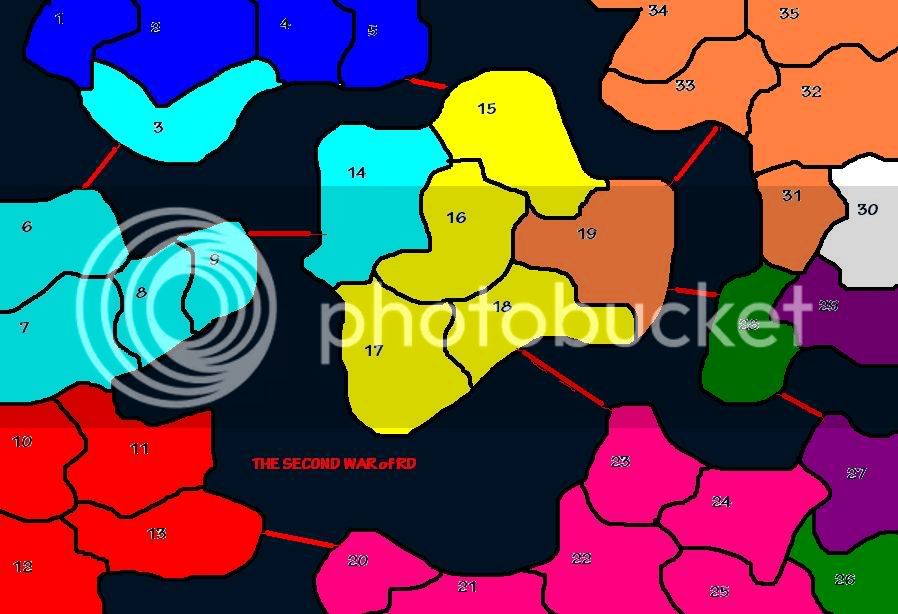 So a new turn begins.

Pfft... Missed the cut. Will have to wait for War 3

I'll be a steward if anyone needs me.