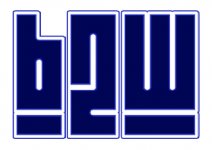 After a humble 3 years and 4 weeks of silence (averaging the lifetime of a standard hamster), it's time to celebrate the glorious return of Born2Win (for the uneducated, the old Homepage: koti.mbnet.fi/born2win ).
At this point no doubt some of you, especially the pre 2007 ducks, might already feel the urge to choke or spill your coffee on the keyboard. However, for the sake of your health it has to be pointed out that the reborn Born2Win will enter the combat area with somewhat refined guns. Whilst the award-winning "2FAST4U" phrase remains Born2Win's core essence, the team will this time put its main focus on track, and especially on its precious development programme for young sim racing talents - after all, driver development is what the team has been all about. And as you probably already deduced from the placing of this article, Born2Win will serve as an extension to the "big devil", Precision Motorsports, through selective co-operation and integrated talent development. 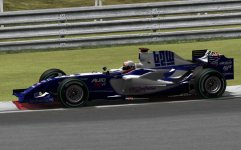 Whilst the formalities have been dealt with, it's now time to present the car and then newborn Born2Winners. The team's first ever painted car, hereby known as B2W-B42, features a streamlined silver-blue scheme, bringing a scent of history and modern era (read: 2010) in the same package. Kudos to the painter Juan Diego. As first official pilots, the team can proudly announce Jeffrey Rietveld, Sergio Casalins and Christiaan Burgel, all henceforth taking part in the FSR World Series. Rietveld is no doubt the perfect candidate to fit the team's image, having already been a contender in numerous leagues and gifted with a humble attitude despite of a young age. As a complementing force, Casalins will provide long-term perspective into the team, being an avid racer in FSR since 2006 and having proven his pace numerous times on the highest level. With the above line-up, Born2Win will make its long-awaited re-entrance on Saturday 14th August in the FSR World Series Hungarian race, a moment you ought not to miss. 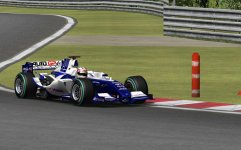 To end with, some history will do. Born2Win (2006-) was founded by a number of teamless sim racers, with the core management consisting of John-Eric Saxén as representing team manager and current Precision Motorsports manager Ondrej Kuncman. Other notable former Born2Winners (all multiple race winners) include Machiel Schönbeck, Deniz Acarlar, Domagoj Malezic, Gianluca Menna, Brendon Davis, Petter Kaasa and Janos Magasrevy. 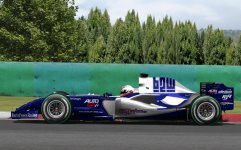 Born2win soon after its founding became well known of its open attitude towards sim racing, which brought the team several avid followers and readers. The highlights of its existence was marked by several unforgettable race victories, organized championship series and test events, culminating into the release of the widely respected F1 Challenge setup pack. At the peak of its era, Born2Win was unfortunately struck by loss of funding, which prevented entrance into the FSR World Championship. Reluctantly, several talents escaped to opponent teams and the team slowly dissolved into a state of oblivion... only to come back stronger 3 years and 4 weeks later.

Ondrej Kuncman commented:
"I have been playing with the idea of re-opening B2W since last season but quite frankly there wasn't a reason to do so. Now, 7 races before end of 2010 season we have to start looking to even strengthen our lineup. In Precision Motorsports we are not willing to take any risks regarding for us uknown drivers and that's where Born2Win steps in. The selected drivers will be under scrutiny in the next 3 months and the most suitable ones will get a contract with PM for 2011. If you think you have what it takes and would like to race in PM in the future, contact us."

John-Eric Saxen commented:
"As former manager of Born2Win I I honestly did not expect this day to come, but naturally I am excited to read this piece of news and looking forward to see the renewed team in action. Born2Win involved a lot of cunning concepts, some of them dare I say "revolutionary" to the sim racing community, but due to limited pocket and time all the awesomness undeservedly died. The backing-up from Precision Motorsports will no doubt give the team better tools to fulfill its new goals and hopefully some of the old "überness" remains (by that I don't mean our old drivers). But enough of talk, time to get on track and bring the virtual trophies home."

Sergio Casalins commented:
"It´s a pleasure for me to start a new era in my simracing career entering this team. It was a year of bad luck, with a lot of lost opportunities and I feel that I can turn this around working with a great team. For sure we will do our best to reach our goals."

Jeffrey Rietvield commented:
"It's great to join this team. The team was/is very good in the past and I and my teammates will try to be just as good or maybe even better."

so that means from now on you guys will take top 6 positions in ws and soon in wt too? anyhow good luck for ''new'' team
R

Life of a hamster - had me loling

Sami Pesari said:
so that means from now on you guys will take top 6 positions in ws and soon in wt too? anyhow good luck for ''new'' team
Click to expand...


If you check last results they haven't taken all top4 or top6 positions at all.
And we will keep working to not allow that as in the past races.

And another new Team for Gosbee.....

Ralf Gauss said:
And another new Team for Gosbee.....
Click to expand...

lol @ crash with Greco.. shame he's gone... Yeah my nickname then was killing attack, after that tjbolier

wow DENIZ LMFAO !! thats a name i aint heard for some time... nice in some ways to see born to win back... had many battles in the past with born to win (good ones) lol

Good luck to them.. im going to find Deniz and get him in ash LOL

Not sure about other leagues, but it was 2006 when they entered FSR for sure. I remember well because we were having our championship battle with Mark, Ferry and Laszlo, and suddenly we also had to fight againt Machi, John, Ondrej, Dodo, Deniz, etc. Nice memories!

While it's nice to see a 'new' team I must say that it's bad that we can still have the way with one team having multiple shapes so to speak.
While I'm not the one to say it's wrong (I've done this as well) I hope that there will be some kind of rules change next year to prevent these things from happening.
I'm not saying anything bad about Precision Motorsport, they are doing everything according to the rules, it's the rules that are wrong to allow these things.

Fredrik Arbegard said:
While it's nice to see a 'new' team I must say that it's bad that we can still have the way with one team having multiple shapes so to speak.
While I'm not the one to say it's wrong (I've done this as well) I hope that there will be some kind of rules change next year to prevent these things from happening.
I'm not saying anything bad about Precision Motorsport, they are doing everything according to the rules, it's the rules that are wrong to allow these things.
Click to expand...

Born2Win will be all separated from Precision Motorsports, sure it runs under the same Management, but it has it´s own Forum, it´s own Testingserver and Data is not shared between both.
The purpose of the team is to give drivers an environment to improove their skills, which isn´t done if you just give them setups and let them drive.
L

Ted was great Ondrej... did get a bit intense at times.. and some went over the top cough cough lol.. i will never forget our spa collision lol.. wow... although bad at the time... good memorys oh and the day i was infront of you in australia.. rh2004... round 1 ted 2005 i think.... and my pc restarted as a firework went off next door LOL

ooo You were Kimster, how cool is that great memories now

TED was awesome, was my first Sim Racing League and where I met the infamous Morris. LOL! - Good fun.
D

Welcome back, hopefully the team will represent itself better to the outside than it did back then.

This quote is a bit amusing already:

To educate, this is Twister-Racing's slogan, since 2001 if I'm correct.

I dont know about this team but good luck for them

Dennis Hirrle said:
To educate, this is Twister-Racing's slogan, since 2001 if I'm correct.
Click to expand...

Correct, however I think the slogan came to my knowledge from some wild msn discussion long ago at a time I in fact didn't know about the existence of Twister-Racing, so I may call it "cultural exchange" rather than plagiarism.
You must log in or register to reply here.
Share:
Facebook Twitter Reddit Pinterest Tumblr WhatsApp telegram Email Link
102
Rate the Sims | FINAL RESULTS
11
F1 | Ferrari Sign Charles Leclerc's Brother to Driver Academy
23
TT Isle of Man 2 | Collaboration With Real Riders Confirmed
15
TCR 500 Headlines New Bathurst International Event