Tech issue or not But have a laugh 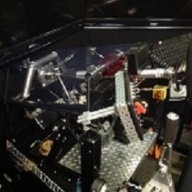 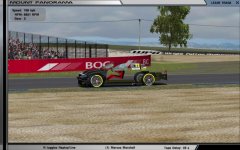 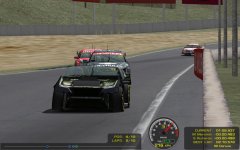 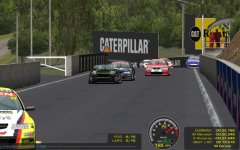 I was watching the replay, just doing some adjustments to my selection of buttons, and then the body of of #77 just vanished. Came out of the replay and restarted the race and was restored.

By the way this car was about 4 or 5 place, in the third pic I am just behind, #77 was uncatchable and went on to win the race by 4 or 5 seconds...do you think because it was a bit lighter?

Ps: I thought Tech might be interested so I placed here and not as a screenshot...Admin it's your call. 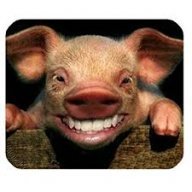 Do all the Falcons do that to you?

It looks like a LOD issue in the Upgrades file, but I can't say I have seen it do it to me and I have looked at our GEN file and can't fault it.

What are your graphics settings in the ingame configuration (custom, low, med, high, ultra??), and have you changed the BA_upgrades.gen file in any way? 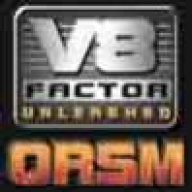 That's an interesting one to say the least. I'm wondering if you've checked all the simple things like checking naming matches between the veh file and skin file. Call me captain obvious but I'd say it isn't just the lods alone because the Orrcon falcon in the 3rd pic isnt showing the same glitch. Does this happen intermitently over a variety of cars or just this once with the 77? Am I also correct in my observation that the 77 is a custom skin? If you can link to where it came from I'll see if I can replicate and fix the problem.

That's a wierd one. The parts under the bonnet and guards are part of the main body object, so I don't think it's anything to do with the .gen files. I have seen materials and/or textures get mixed up way back when I had a crappy pc and tried to run a full grid of the Carrera Cup mod. It was clear that I was out of memory and my pc was struggling to put out more than one frame a second though.

Can you tell me if your pc was struggling at all or should it have no problem running it? If you press Ctrl-F three times it'll show the fps on the right and memory use on the left. Can you do a test with a full grid and tell me if the top bar changes from green to yellow or red. If it goes red then that's most likely the problem. Note that there's a thinner bar below that flashes red when the cpu load is high also, that's normal unless it's always red.
M

Mojoman, and others, Yep it looks to be my end. I was running full grid plus everything on full. I was fooling around at that time and just wanted to see the potential of my system. It looked to be ok untill car 77 before my eyes decided to go half naked.

I tried to repeat that issue by loading up the graphics, didn't come cross that same problem but system went into freeze mode, or just very jerky at times, Continued to bring down the graphics to a point where it could keep going in order to bring up that problem but no go. I can't give you any fps cause on the right top corner all I get is a black square and single numbers like 3_, or 1_ ect, thats after pressing ctrl f as u said, the other side I was getting a green barr never saw the red one.

Anyways, I reackon youre right it feels like a out of mem situation. I have an x800 raedion 324 meg ram , plus 1 gig sys ram, 3200+ Amd Athlon cpu, It does the job for my needs so I"ll just tone the game down to where I like it for now until my beast of a new system arrives. If it occurs again under my current config then I will report again.