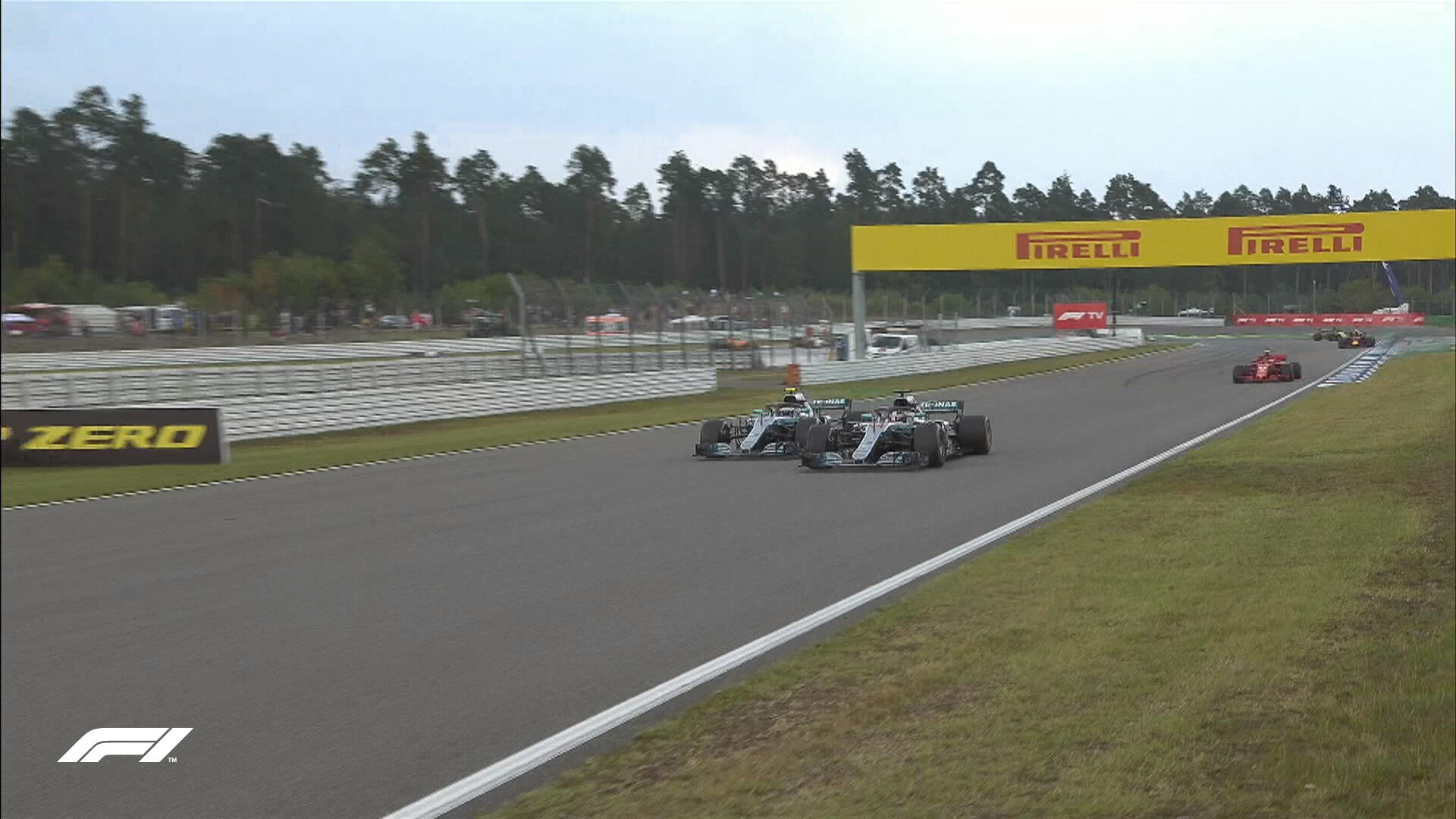 Mercedes instructed Valtteri Bottas to hold station today at Hockenheim, does this mean the German squad have placed all their eggs in a Hamilton basket this season?

When green flag action resumed following the race ending accident for Sebastian Vettel in Germany, it would be Valtteri Bottas who proved quickest off the marks behind the safety car, the Finn pushing his team mate hard for the race lead for a couple of corners, before word came through from the pit wall to hold station behind the British driver - something Bottas notably agreed to do almost instantly on team radio.

With Bottas firmly put in his place during the race, suggestions within the paddock seem to belive it looks firmly like Lewis Hamilton has the full and complete backing of his Mercedes team for the World Championship this year - with Bottas marked down as clearly the team number two for the remainder of the season.

Team orders are often necessary in Formula One, but never palatable for fans of the sport. With the goings on in Germany today, do you think it too early in the season for Mercedes to favour a single driver, and is it inappropriate for the German team to restrict the racing between both cars following years of allowing former team mates Rosberg and Hamilton to go at it tooth and nail in seasons past?

Its normal, constructor champ first, nothing more, better than both collide and throw away points for the team

Ferrari did the same a few laps earlier.

I try not to follow F1 anymore. It just gets on my nerves how penalties are inconsistent, how the current rules make it so difficult to overtake etc. The sport is completely derailed.

Kakusso said:
Ferrari did the same a few laps earlier.
Click to expand...

Premium
Why are we even bothering to comment on this?

It is supposed to be a team.

The thing that annoys me most is the fact that teams won't tell how it is but instead use euphemisms. And Kimi will agree
M

Kakusso said:
Ferrari did the same a few laps earlier.
Click to expand...

Vettel was much faster and on a different Strategy. His Tyres were 11 Laps younger than Kimi's.
So in the end Ferrari and Merc did the same thing
M

By-Tor said:
I try not to follow F1 anymore. It just gets on my nerves how penalties are inconsistent, how the current rules make it so difficult to overtake etc. The sport is completely derailed.
Click to expand...

Like Kimi received a penalty 2016 for driving in to the box but not pitting (he left the entrance): And Hamilton don't receive a penalty for the same. On the SAME Track.

That's two comments from you of a similar tone now, across both threads.

If you don't want to comment, then don't. I suspect you won't be missed....
P

In this case it was mainly to prevent a situation like RedBull at Baku . Imho justified to don’t take the risk to lose two cars with such a forecast for the end result. It was a call for not taking the risk I guess (certainly not in those tricky circumstances because of the moisture).

An order to stay in place and not take the risk of losing a good result for WCC is imo justified. Remember the dogfights between Hamilton and Rosberg. Not what they want as constructor. So the call to temper those dogfights are reasonable.

But a switch of position because “one is faster and held up by the other”... Isn’t that what racing is about? When you are faster you have to take actions to overtake. And when it doesn’t succeed you just have bad luck and aren’t fast enough to truly overtake. And then you have to accept it and maintain your position and pace ‘till a good oppertunity rises.

These orders are ruining it. It becomes like there are only 10 teams are racing instead of 20 individual drivers. Just my humble 2 cents about this topic.

Hopefully this stops the high horse nature of some of the MB fans. Team Orders happens in F1. Yes Ferrari do it. Yes all the Other teams do it and now Mercedes have been shown (publicly) to do it. Its a part of the sport so when it happens no one should be that surprised anymore. Just the way things are. I was a bit upset after all the stuff Bottas as been through this season he wasn't given at least the chance but hey ho thats racing and maximising your points hall. Your gonna back your best horse and thats Hamilton. Smart move from Mercedes.

Mercedes exceptionally asked Bottas not to attack Hamilton, whereas Ferrari routinely requires their drivers to swap places on track.

See? The annoyance is not over yet

I think merc just used common sense. What's the point of having Valtteri win if he will not even be number 3 in the championship? Does anyone have any idea how to do it better?

Maybe if Christian Horner is a member of this site and reads this, he might quote me and say "I do!"

Mercedes have given Bottas very similar chances as LH. Bottas also knows his place, he'll get more success working as a good number 2, than for any other team in f1. I do believe though that LH, SV and MV would not have listened one iota to those team orders.

I do believe though that all of those threw would've let the faster driver through in Kimi's shoes. I think it killed vettels chance cruising behind him, they won't get penalised for team orders so why not get that addressed long before it affects strategy.

Also... where was Christian Horner this weekend?

Much as I'd like to see Bottas win more races, today's decision by Mercedes was the right one.
Had they fought each other at that stage of the race, the chance for a collision would have been much higher.
They could also have potentially 'run' the tires off the car, allowing Kimi to take the win and Verstappen to jump both drivers for second.
Had Bottas passed Hamilton, Lewis would have been exposed to being passed by Kimi on much newer tires.
It was the best team decision for maximum points...both driver and Constructor. .

Team performance should be based on how good the car's are and how good they are at training drivers and maintaining a good car and pit crew not who can give the most order's not to race in a race. I think people are forgetting why they even have team's in F1

Grape-Juice said:
I think people are forgetting why they even have team's in F1
Click to expand...

Lewis' and Valteri's contracts probably have it all laid out as far as Driver 1 and Driver 2. Same with Ferrari, especially if Kimi is re-signed. Still it's disappoimting if you are a Kimi or Valteri fan to know that you'll only be allowed to win if the team #1 is out or held up by the competition.
You must log in or register to reply here.

With 16Nm of torque on tap the R16 can lay down an ultra-wide torque range that accurately reproduces the dynamic steering characteristics of top racing cars from F1 to IndyCar. Feel the road through the steering wheel. Buy now from MOZA Racing ($999,00) Beauty is Power Inspired by supercars...
Share:
Facebook Twitter Reddit Pinterest WhatsApp Email Share Link