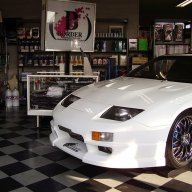 I'm having a strange problem with my Logitech G27 wheel at Curitiba. I can race at all the tracks with 25 ai opponents with no problems and on high graphics settings but not at Curitiba. The weird thing is as soon as I click the green arrow to drive my wheel shakes horrendously and I if I let go of the wheel it turns fully left or right. Is Curitiba a high resolution track or something like that?

Right forget all that its now happening at every track I've had this game for ages with no problems and now suddenly I cant use my wheel. As soon as you drive the wheel shakes and then you can't steer because it pulls left or right as soon as you turn. Tried GTR2, Rfactor, Copa Petrobas with force feedback on medium at 75% all working fine

The game was working Saturday what the hell has happened!
Not my video but just found this and its exactly the same (please remove if vids aren't allowed)

Well this just gets weirder Made a new profile in Formula Truck, tried the Ford and the wheel worked. Then tried the Iveco and it worked but moved to the MAN and the shaking while stationery was back. So went back to the Ford and this was doing it now as well then reset the controller settings in game which fixed it. I then tried all the trucks one after the other on the same track, Ford, Iveco and Volvo work but MAN, Scania and Mercedes all shake violently and can't be driven.

Does anyone know of any difference between the trucks regarding the steering force or Realfeel plugin? I don't want to mess with the game to much due to it being on steam now