*If necessary I will watch the replay, count cuts and give out penalties for excessive abuse.
Server is UP!
Last edited: Jul 22, 2014

Checking the calendar, next week's evenings seem to be pretty vacant this far and I haven't made a full week of events for quite a while, so lets try

This one might be slightly difficult to make as we're hosting an event at work which may turn out to last longer than anticipated, but count me in as a still-quite-likely maybe

Yeah, Im for this too!

What version of Curituba will we use?
Not sure if it makes any difference, but just curious in general.

Also, I probably gonna get some negative comments for this, but seriously, the Scirocco needs to be excluded. I just had a few practice runs with a few cars, and with the Scirocco, I were 3 seconds faster than with any other car.
Mind you, I wasn't really driving at my best either. Volvo C30 is also faster, but not by much.

If the Sirocco or the Volvo ever become the dominant car I will start excluding them. Both have been excluded at times in the past without giving them a real chance. If you think the car is the one for you and the track, go for it.

Meant to get it live earlier today, however, working hours have been magically multiplying
A considerable amount of existing WTCC skins is already compatible to STCC2 cars. However, if you want to include a separate skin for STCC2, feel free to do so now

​
For more information on the pack and how to get your car added, see this topic.

Normally I use the Accord. But thinking of going with the C30. Incredible smooth and good under breaking. Have a few issues during turning in a few corners, but we see. It's difficult to abandon your dominant mistress

I should be around for this.

If I use Honda for this race, here is the skin.
Should work with both WTCC and STCC cars now

Oh how I dislike this track. It used to be a massive cutfest at T1. However, as I will be trying to master the BMW racing will be a thing of the past tonight so sign me up please.
P

Well, well... searching for a car to become my go-to-car for the STCC events (actually my priority today, so I'm kinda sorry I won't be able to portray the races in every detail today ), I was reconnecting quite a bit throughout P1.

Finally settled for the P407, and while I had a good lap to the end of P2, I didn't quite manage to get a good hotlap going in quals - grabbed P5, started poorly (hadn't practiced, whoops) and went to the back of the pack. Regained a few places throughout the race but got into major problems when the tyres burnt out at about L10.. Finally went over the line in P5.

For race #2, I switched to SimBin's default setup as suggested by Bob, and.. started poorly again The car felt slightly better after some laps, though, and through some nice back and forth due to a really close grid, I managed to grab P3 after Alex and Philippe went off in the last lap, whoops

Nice racing altogether, though I'm not yet sure about the car, that livery might've to wait for now See you next time, thanks for racing!

edit: checked my replay, 3 T3 cuts and 1 T1 cut in race #1, 1 T3/1 T1 in race #2, some due to crash-avoidence, nevertheless, sorry about these!
quick-checked a few other drivers as well - while still existent every now and then, as far as I can tell, there wasn't as much cutting as i had feared
Last edited: Jul 22, 2014

Todays event, with this many sign-ups, it sure were written in stone that it would be tight racing from start to finish. There are so many corners where one might be strong, but weak in another.

Q:
I just wanna forget about it. Totally screwed it up, and got placed at the back of the grid.

R1:
Manage to pick up 3 places, during the start. And at T1-T2-T3 I lost one spot, but since I also passed one additional driver at the combo, I were still in P5. At T6 @Campbell Wallis Spun out on his own, and I were up to 4th. At lap 4, I passed @Philippe Fournier. At lap 5, I made tiny error at T2 and went side-ways, but manage to hold my spot.

Then the chase for @Alex Odell Begun.

I pushed and pushed, and pushed a little more, and then finally I were at his back.
Since the C30 has great acceleration, I were never close enough to pass him. Even if he made tiny errors. I knew I only had one chance to pass him, and that was at the start/finish straight. At lap 12, (at T1) I were really close, almost side by side. But someone went off in front of us, so we slowed down and resumed we were left of.

R2
This race was somewhat a complete mess for me. At the start, I manage to steal of few spots, and were up to 3rd. At T4/5 Capmbell went of a little and I passed him, up to 2nd.
Now comes to funny part. I were right behind @Dennis Phelan at T6, and somehow he surprised me. He braked much earlier than I expected. It was like he completely stopped, and that made me bump into hos rear bumper, and that in turn lead to Alex bumped into me. We both went off, so not much could be done then get back on track and start the chasing again. Once back on track, I were at P6.

One lap later, I were in 4th place, I knew somewhere in my gut, II could be even more competitive so I pushed a little more. At lap 3, I passed @Björn Golda, and Campell were not that far away. Sadly I out braked myself at T4 and Björn and @Bob Miley passed me. Now in P5 and pedal to the metal, and here we go again.

Time to chase Dennis, who had been into P1 as long as I can remember. Slowly but steady I got closer and closer to him, and at lap 11, Dennis missed his breaking point I think, and I passed him at T1.

At lap 14, I had no tires left, but decided to stay cool and don't do any dumb stuff. Bob were not far away, so anything could happen. Took the checkered flag, and then I realized my back were soaked in sweat 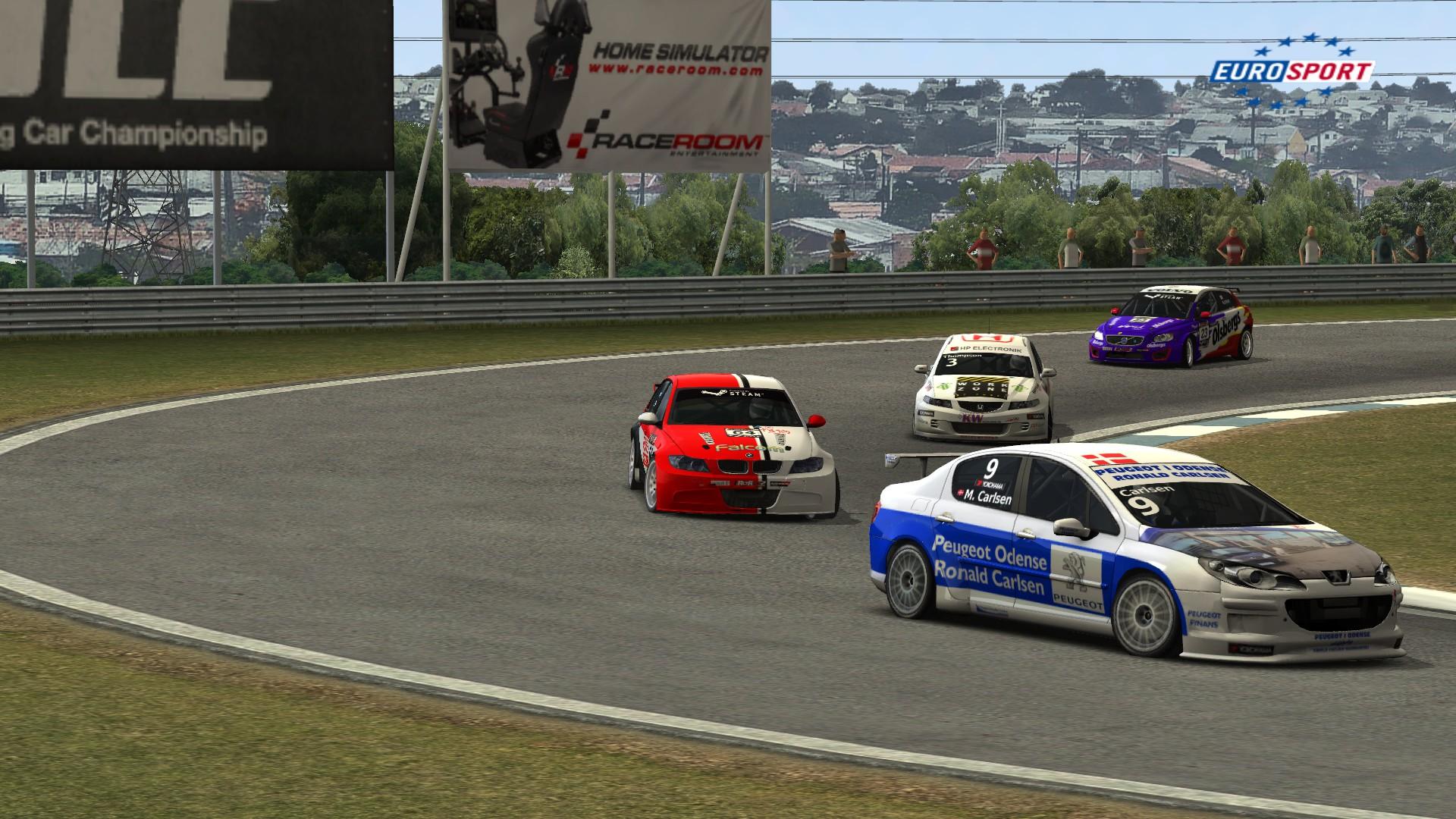 That was just epic in so many ways.

Race 1
Made an epic start and slotted in just behind @Alex Odell, but half-spun round the lap and dropped the the back. The rest of the race was mostly spent with @Björn Golda in the underpowered Peugeot and @Philippe Fournier's Honda. I eventually got past both after mistakes then inherrited 4th from @Dennis Phelan running out of fuel.

Race 2
Another epic start put me in the lead, but I got out of shape and let @Dennis Phelan through. @Daniel Linder was conspiring to take himself out, but I knew he was a threat, and I set about catching Dennis with Bjorn acting as a nice buffer keeping some of the faster guys behind. Eventually, I was about 1.5 seconds off the lead, but I made a couple of errors and found myself at the back. The last few laps were a blur, with Alex, Bjorn, Philippe and Dennis (I think) jostling for position. Desperately tried to pass Dennis with a couple of lunges but he held on and I had to settle for 7th.

This event ran much better than I expected and driving standard while not perfect was very good by most of the drivers and no serious infringements, no purposeful cutting was going on. Thank you all for that. I did review the replays for Quali and Race one, watching every corner taken by every driver so I know who is getting a piece of coal from Santa this coming Christmas!

Everyone has a car for this track right! Well I went with a "fav" from long ago and just updated it a bit. nice because I was planning on spending some of practice time being a "marshal" at T2!

I flubbed Q going into T1 too fast and cutting T2 badly so I just motored around.

R1 Not very exciting, cars going off track for a bit and just haveing a good drive, until I ran myself out of gas on the last lap. Seems I reverted to a seved fil that dod not have the gas I added after making the calculation for this event .

R2: so, from the pole. I took off like the devil, something I like to do when on pole and just ran hard. My tires suffered and when Daniel caught me I tried max braking from my best spot and it didn't work, off at T2 and Dan by. All was still good until the next lap or so and I just missed my brake point at T1 COMPLETELY and everyone got by. Oh well a laast few laps with Campbell just to finish things off.

Thanks for coming out and for [trying to] maintain the high standards of RD as a driver!

Looks like it was a fun race! Wish I was there, but I will see you guys Thursday!

Nelson Ullinskey said:
Looks like it was a fun race! Wish I was there, but I will see you guys Thursday!
Click to expand...

Yes, it was actually really fun. As far as I can tell, there were nice racing across the board and a few nice fights.
You must log in or register to reply here.