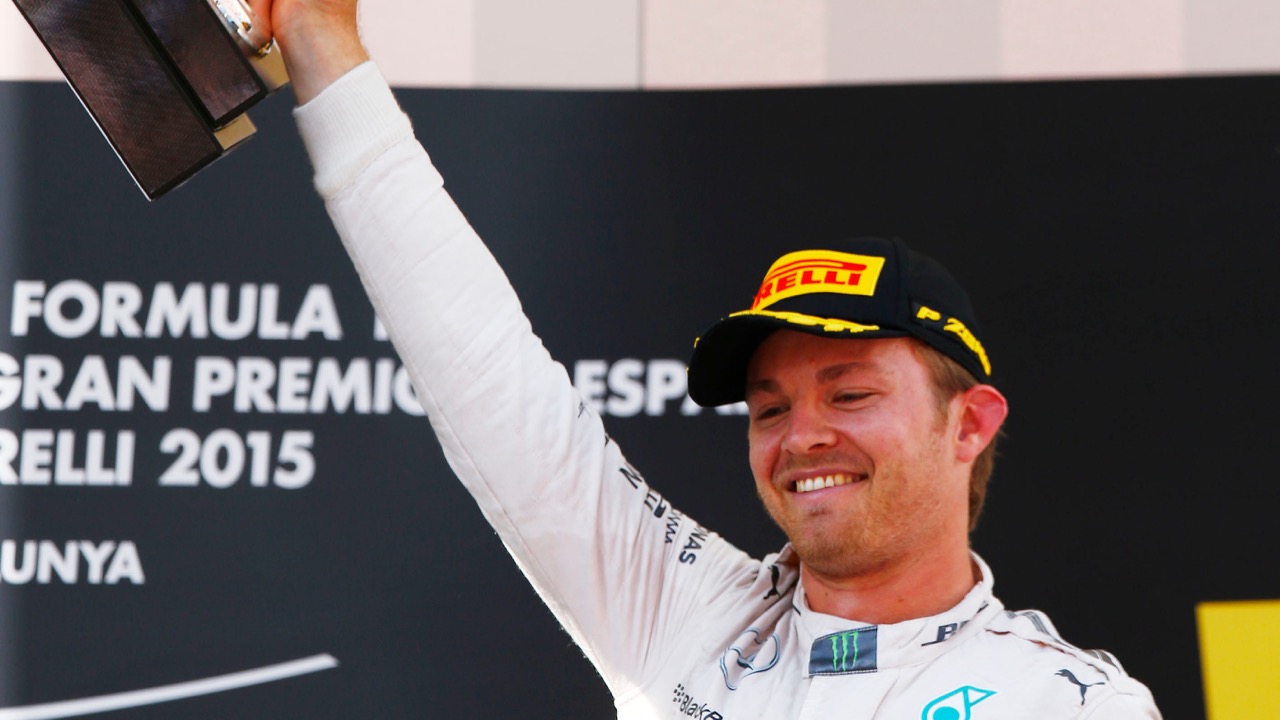 Nico Rosberg took his first victory in 2015, marking his ninth Formula One race win and has started to close the gap on Lewis Hamilton who finished second, ahead of Ferrari driver Sebastian Vettel.

Nico Rosberg had been fairly dominant all weekend setting the fastest Free Practice lap time, qualifying on pole position and practically led from start to finish in the race, which saw him beat teammate Lewis Hamilton by 17 seconds. The race wasn't as clean cut for Hamilton though, who didn't have the best of starts dropping to 4th position on the opening lap - although he quickly caught up to 3rd, trailing Sebastian Vettel. Hamilton was able to close in on Vettel but was unable to pass due to turbulent air, and the technicalities of the Circuit de Catalunya. Instead Hamilton was able to pass Vettel through strategy, with Hamilton stopping three times and Vettel twice.

Third was probably the best Sebastian Vettel could’ve managed in the Ferrari today, although he got off to a great start and ran second for quite a while, it was evident the Mercedes had better race pace. Vettel did complain through the race about lapped traffic holding him up, which meant Hamilton came out just in front of him after pitting. Regardless, it wouldn't have been enough to help Vettel keep second position as Hamilton was setting fastest lap after fastest lap in the closing stages of the race. Kimi Raikkonen, who was driving a pre Barcelona spec Ferrari, only managed fifth position behind Valtteri Bottas. Raikkonen slipped behind Bottas during pit stops and was on the tail of the Williams all the way to the race's end.

Toro Rosso’s qualifying pace did not translate into any relevant race pace as both Carlos Sainz Jr and Max Verstappen dropped down the grid order rather quickly. The reason for this is due to the team apparently running a high downforce set up, meaning they were quick in corners but lost valuable time on the straights. When it came to top speed they could not match the likes of Red Bull and Lotus. Towards the end of the race Sainz managed to pick up ninth position, albeit having made contact with Daniil Kvyat. The stewards investigated the race and it was declared no further action would be taken.

Felipe Massa had a strong race to finish sixth from ninth on the grid. With Valtteri Bottas fourth for Williams too this is seen as a strong result for the team as the race is regarded as the ultimate test of the car. If Williams are able to build on their updates from this weekend it could see them challenging for podiums in future races once again.

Romain Grosjean finished in eighth for Lotus, again finishing in the points. Pastor Maldonado started off very well, speeding through the pack until contact with his teammate in the opening stages resulted in his rear wing endplate coming loose. Due to the potential danger an unsupported rear wing presented, Lotus had no choice but to retire Maldonado from the race. This puts even more pressure on the driver for this year, as he has only finished one race, Bahrain in 15th position, with no points to his name.

McLaren had a race ahead of them filled with the potential of scoring points for the first time this season. Today was not their day, with Fernando Alonso retiring due to a brake failure when pitting in which he narrowly missed running over the front jack operator. Jenson Button finished 16th, only ahead of the Manor backmarkers. Jenson later said “[the car] was scary to drive”. After a decent practice pace and qualifying results, it turned out to be another weekend to forget for the Woking based team.

What’re your thoughts on today’s race? Can McLaren score points this season? Will Lotus will say enough is enough with Maldonado? Can Ferrari really pose any threat to Mercedes?