Some issues with graphics...

Hey all, I noticed this thing just today, when I started making lights and flares for my new car - then thought I was doing something wrong, so I went back to the "coming-with-the-game" Lamborghini Murcielago and I was pretty much surprised by the fact those issues are there as well.

First of all, flares aren't there. I see the projected front light and the lighted up models, but no flares at all. Not really a bad thing for taillights since I think they're luminous enough, but headlights have no illumination at all. I saw a "flare" parameter in racer.ini but I bet it's just for the sun's flare effect and has no influence on cars (I manually set it to 1, nothing happened).

Then, the projected front lights' texture acts in a pretty weird way... Lots of purple and green scattered all around, and some weird "rays" coming out of a strange zone under the car (nullpoint perhaps?). See here: 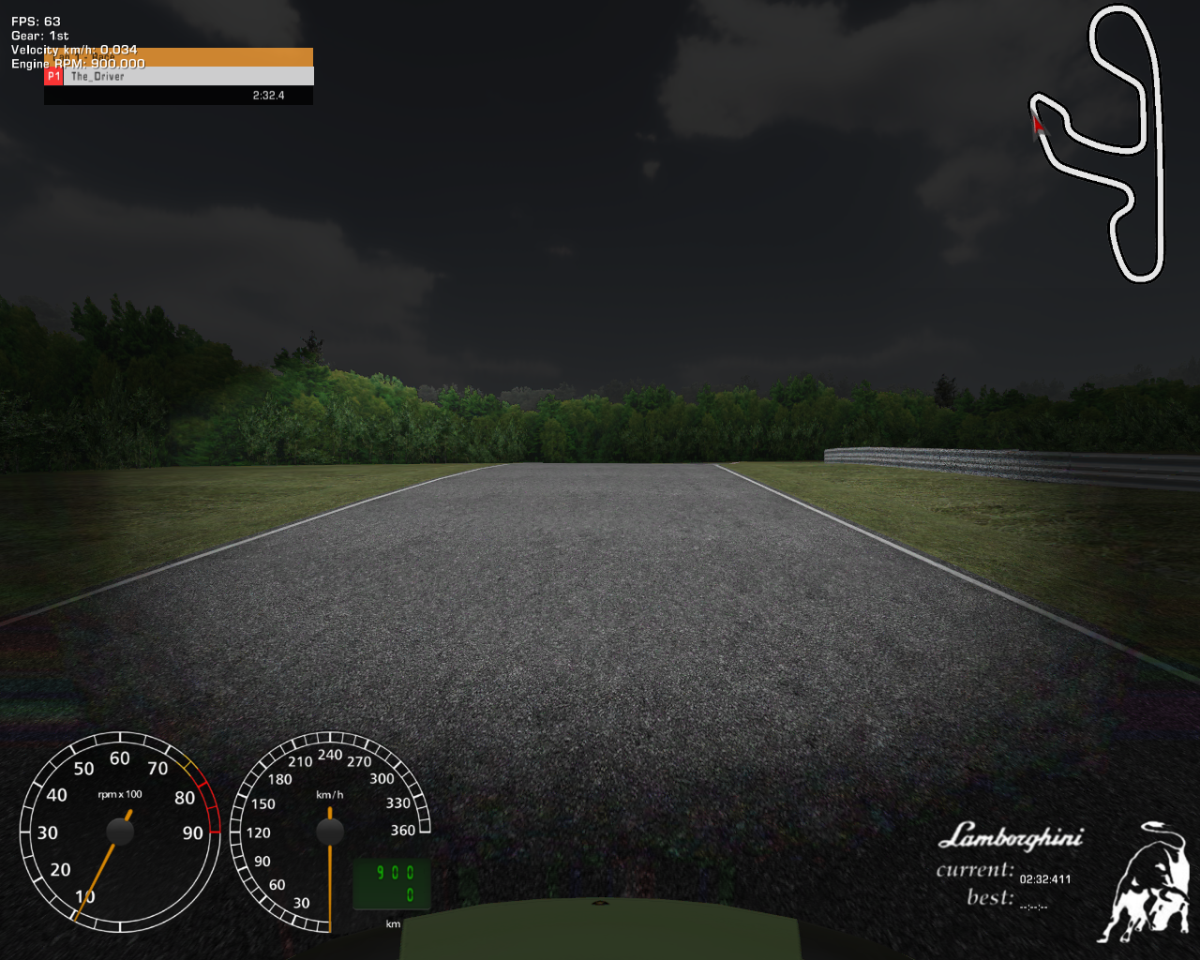 If it helps, I'm running a nVIDIA GT 730 graphics card, keeping the drivers up to date.

What Racer version are you running? At first

The latest versions of Racer change quite a lot of elements, and the car flares are quite old, so there is a chance that they're not working properly these days.

For instance, Ruud has been changing a lot of the z-depth based parts, of which flares are most likely linked with, so maybe they're there, but just not being rendered on top.

Also the Murcielago although roughly updated by Ruud at each Racer update for major functionality, may not have the finer details updated and checked at each step. So maybe the flares are just not set up right for this latest version.

Really the best Racer versions where most content and features work reliably and there are the least bugs are around 090 RC5c... I think most people are using that or versions 6 months each side of it.

Of course the latest versions of Racer are always worth grabbing but they may not always work perfectly.
Usually Ruud slowly fixes bugs as they become apparent and the community helps weed them out over a few updates, but since we've had no updates for a while now, and RC10 had a few long-standing problems, it's probably not the best version to use for now unfortunately.

Oh, so that means it's a Racer problem itself and not my PC's fault, heh xD

EDIT: apparently the link on racer.nl points to version "b" of RC5, which is severely bugged (I bet it has collision issues since my car can't move properly and I just copy-pasted it from RC10 to RC5b...). Where can I find RC5c?
Last edited: Jul 21, 2015

Well I can't guarantee what your problem is specifically, but I know that the 'flare' system is pre HDR system in Racer, and pre CSM etc.
It's quite old these days and doesn't work entirely robustly even when it's working properly. Ie, scaling and intensity elements could be improved but are hard coded into the Racer engine.

In fact I wonder if there is a way to use the shader Stereo wrote for the lens flares on the Bay Route track on a car somehow.
They are still not perfect but I think that is more a case of refinement than anything.

RC5c may not be available for download any more on Racer.nl.

It may well be linked to from the RC5 release thread though.


I'm not even sure if I have a copy, but I know Cosmo usually keeps a good library of releases so if we can't find it I'm sure he'll help out with an upload link!


All that said, there are lots of other versions to try.

I'll try download the version you were using later tonight and test it out to see if it works ok here!

Great then! I see this community isn't that much lively like it used to be some years ago, but still it's nice to see that you and Cosmo are still willing to help newcomers

Waiting for some news then! Thanks!

Racer is still great, I think the absence of Ruud for a bit (busy doing boat things and real life things), and also the release of games/sims like AC and pCARS has hit the community here quite hard.


Yep, I'll grab the latest Racer tonight and try it out.

I think a few of the big shader issues were things we can possibly fix ourselves any way. I've just been too busy to have a proper look and invest the time in making the latest versions work really nicely here!

Ok well no luck with the flares here, so add it to the bug list for this version I suppose.

Generally though the graphics here seem buggy. I'm getting all sorts of problems from the projected lights system too.


I think Ruud had re-worked lots of z-depth stuff in recent versions to enhance some features. I'm not sure what features exactly because even on huge complex tracks I've never had z-buffer related issues.
Ruud would probably be able to clarify.

But in any case, I doubt Ruud has considered the night time features (flares and projected lights) yet, and so they are basically broken for now.

Ohs, okay then, so it's definitely exe-version-related.

Anyway I found a RC5c link here on RaceDepartment (well not really, it's a RC5c .exe to overwrite on a RC5b installation), I could try that one and see what happens

EDIT: oh yes, all problems are gone. Seems like RC5c also lightens up emitting materials a bit more, which is a nice thing with head- and tail-lights. I suffered a small FPS drop but my PC isn't good at all, so that could be it.
Last edited: Jul 23, 2015

I'm not sure where Ruud has been finding the fps boost in more recent versions of Racer, but it's probably just the same elements you can tweak now to boost fps, such as shadow resolution, frame skipping etc, rather than anything too fundamental.

Also with good content (made to modern spec with batch count in mind), fps in Racer can be pretty good even with fairly moderate hardware.
Ironically most older tracks run slower and look worse, than a modern well made track, for the very reason that they are not batch optimised.

Making a good modern track on the other hand is fairly time consuming hehe! But even just batch optimising an old track can yield big fps savings.
Ie, the Roggel track Cruden released for us a few years back, on my machine I got a 30% fps boost just by batching the trees only! So a lot of why Racer runs slow is to do with track build techniques than hardware

Hah, good to know then

Anyway I found out that some of the projected light problems are still there even on RC5c.. so perhaps it's the car.ini section which isn't that accurate... I guess.

I just used a few of my own cars that I've refined and have good working values in RC5c, in RC10.

If you have bad values in that section then they might look bad in any Racer version, but I've managed to get a car looking nice in almost every way in RC5c and all features generally working.

Another thing I noticed in RC10 was the dials/gauges had disappeared in interior views. Again these are possibly either null/CofG offset related (as the bounding box stuff changed again in recent versions), or z-depth related.

My guess is that Ruud is currently tinkering with lots of stuff in recent betas, possibly for the boat simulation stuff... but since it's probably working fine for the boat stuff (no gauges or headlights etc needed) so far then these bugs haven't been spotted and updated here yet in Free Racer.


So yes, best to just still run the older versions for now if you want visually working cars etc

Well... After some tinkering it turned out it wasn't either a PC nor a Racer version problem -- the issue was in the projected light's texture itself. Apparently, the light cone's borders need to be pure-black, else it'll make those horrid stripes around the cone's edges, no matter if in RC5c or in RC10.

Keeping RC10 because it gives me better framerates, actually -- only complaint about RC10 at the moment is the starter sound being played twice, but whatever... Thanks a lot for your help

Hmmm, well the car I was testing must have some other problems in RC10 again haha. In mine it looked like the projected light was depth fighting with the entire frame buffer and doing a weird reflection thing in space (visible from replay cameras mostly).

Yes the frame rate is better in RC10. I think mostly maybe lower draw distances and shadow resolutions etc?
But still, the vast majority of overhead in most Racer tracks isn't these things noted above, it's the draw calls to the CPU costing frames

Well I noticed some weird green flickering stuff in the distance when turning on lights in RC5c -- guess it's mipmapping combined with z-buffer?

RC10 also has no control over the car shadow's intensity via car.ini (the actual texture shadow, not the dynamic one) -- you just need to do adjustments from the texture's alpha, while RC5c allows that sort of things.

Flares are present too in RC5c, unlike in RC10... But I think flares aren't that much useful, plus you can add some "fake" ones in the light models themselves and you're okay.

With super-low poly count cars and tracks, I barely get to 60fps, and once I have some particles on screen, the same message keeps popping up. "PHYSICS RUNNING SLOWER THAN REALTIME". Guess I really need to change my PC as well... It runs a 2.5 GHz dual core, 2 GB RAM. Atleast I got it for 100€ (which is around hm, 130 bucks I guess?) from a friend of mine, lol.

Yes, in practice a glowing model for headlights is a better headlight approximation than a 'flare' really.

The Gallardo has little glowing models instead of flares iirc. With the right settings and shaders they can look pretty nice really.

The RC10 shadow under the car is technically better. The old system wasn't really done using the new shading system so had lots of little problems that you could mostly ignore.
But really the RC10 system will be better once it's started to be used properly with newer content

That PC sounds fine for Racer to me hehe

A good check is to go to ctrl 5 debug screen I think, it has the draw calls readout. Once draw calls get quite high they just block up your CPU and then everything slows down massively.

Yeah I was looking at your Gallardo and yes, it has little glowing models which kinda resemble flares, and they do work good

Once draw calls get quite high they just block up your CPU and then everything slows down massively.
Click to expand...

I bet I saw a racer.ini entry which has to do with performance when using multicore CPU -- should I try that one?

Racer doesn't really support multi-core CPUs very well, so chances are your dual core is as good as it can get for Racer's needs.

What matters most is a few cores at higher speed, rather than many slower ones.

Best bet is to just do a sensible over-clock on the CPU and your FPS will likely increase by the same percentage on most tracks due to the reduction in batch count bottleneck.


What GPU does your computer use?