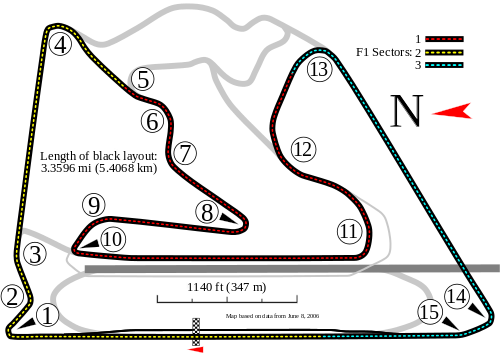 Hard to think that this already 4th race on this season, feels like it just started. As a track, Bahrain is very similar to Sepang. Only thing missing are those lovely medium speed sweepers, Bahrain is a lot more straightforward stop&go type of track from, let's say, not the strongest period in Tilkes career. Track layout is fine but lacks character, comparing this to the newest Tilke creations, India and Austin, is like comparing Oschersleben to Spa. There's a definite element of artificially created racing suitable for just one car class and rest of us just need to endure it. I don't even want to think about the next and worst track in the calendar, these three in a row are just too similar.

All have tight double turn at first, then run down to first overtake where we go to now mandatory esses followed by another overtake place. Then a straight, some more esses, straight and finish. T9 braking in to T10 is probably the high point on track, it's tough, technical and getting it wrong means horrible laptime. All tracks are relatively flat with huge runoffs so drivers have to be comfortable on the limits. Mistakes are very small discouragement but methodical approach is most likely better than ragged, rallyesque drive to make pit tactics work.. Makes it tougher on us, with F3000 engine not being the strongest,,,,, in the world (clarksonism) getting those hairpins right everytime means a hell of a lot in lap time and on those esses you can't really lift off either.

In F1, throttle is on the floor 66% of the distance with almost all high speed traps starting from slow hairpins; fuel consumption is going to be probably the most of all the season. Tire wear should be very minimal but since the track might suit lower wings, we may get more slippage to counter decreased degradation. Rear tires need to be in good condition, there are so many deceleration/acceleration points, 6 in total.

For me, i think my straight line style should be at the strongest here. Also, since you can see, i don't really like or dislike the track, it means less motivation to make longer runs happen.. Damn, why did i even think about Shanghai now.. Well, let's get thru Bahrain first. It's not a bad track at all from drivers perspective, setup is really simple, Sepang with minor tweaks: less mechanical grip, more control and less aero.

EDIT: Higher wings might work too, the straights are not that long. But the basic setup from Sepang should work, even untweaked.. I shorten gearing on lower gears, increased control: stiffen everything up a bit, seems to help with track learning when the car doesn't wander at all, stays flat and i can do minor corrections easier. Once the driving line is cemented, all direction changes are planned well ahead then i'll probably soften closer we get to the race, it felt really good in Sepang that way, practice with control and race with grip. Softer suspension just wont allow mistakes, one just can't yank the steering wheel in the same manner and expect the car to change directions; it's one line, commit to it until the end. Stiffer gives a bit more freedom how to angle your car around the corner.

Rake is now a new interest, i can use 3.0/4.0 pretty well. It might be false confidence but rear does stick a bit better on those esses over the crest. Just have to keep foot down, less speed equals less downforce.
Last edited: Apr 4, 2014

When we approach the first turn, say your wishes, prayers, what ever good will towards our hero, Michael Schumacher. The first turn is named after him. Latest news are that he is starting to wake up, let's hope there enough neurons left that he is still Michael.


I was really struggling to get in the low 1:44 until i decided to go for a safe lap. I stopped trying to push the braking spot few meters ahead and instead went for a safe entry on every corner. So this makes the lap look easy, and surprinsingly, i beat my old PB by 0.4 right away.

My advice here is to keep it calm and call batman... errrr i mean and make sure you have good corner entry everywhere. Don't try to push too hard and lap times will get down.

Here is the setup i use.

Replay files can show different times. When syncing with other screencaps, like motec telemetry, there is small jitter when the replay is "out of sync". Just to give ideas how to make cool videos.. here's one motec telemetry combined with replay (couldn't find the better videos, they it's my old channel, and it's not "google+" activated, so it's not showing in the search.. funny, i can't find my own channel : ) so this is very crude, shows what i mean :

edit: found my channel.. Funny to look at old clips, man, am i smoking those tires or what? Was in a rut, found two seconds off season... Sound familiar? 3 years ago, one of the last GT seasons, with that superb GT1 mod.. Then it was RD GT season that i quitted mid-season, angry as hell, frustrated to commandeer those whales that simply refused to take instructions and came here to drive F1. Which was way out of my class. Found another two seconds. Which i lost. And regained. And lost again.. and ... and... Just hoping that just for once, i gain those two seconds and keep them and gain two more cause then i'll at top 10.. Rambling on... Well, here's the video, it combines two captures, one from Race 07 replay and another from MoTec telemetry.


edit2: have to add, if someone says that sportscar drivers don't drive on the limits and flat out.. hell, that drive is around the midpack, 12th-15th time on that car and with that setup. Race laps are not any different, you go flat out from start to finish. Take it easy: 3 seconds loss in laptime.. Every cm of the track, and with those whales, it means constant battle with the wheel, it just yanks everywhere even on straights.. With F3000, straights are a bliss compared to GTs.. hell, you can drive with one hand with open wheelers.. Still, i much rather drive with less mass and better characteristics, something that can actually over-rotate.
Last edited: Apr 6, 2014

I'm gonna make one such video right now, there's nice example from F1 days in that channel, good comparison how driving style changes or an example how it does not..

I had a short run with old setup from Bahrain and managed 43.4s, worked quite well probably wont change much, Like Steeve said it takes a good smooth lap some corners when taking the optimal line for exit speed you can gain a lot of time on laps, this is probably best practised.
So sticking with a setup and practise probably best option for improvements.
My old setup was 20/21 wing also, ill have a little tinker with it and upload modified setup once happy .

I've done some calculations and pit testing and found the following (all numbers are approx.):

Setup Modified old one from Bahrain slightly more stable than older one managed a 43.2 so far, again would probably beat old pb or possible high 42 but I wont probably be able to practise again till race day hope it helps either way im ready atm .

Strategy ill leave out lap times but looks like could be a close call between 1 and 2 here depending on wear and track position/traffic .

Premium
I tryed my last year's Bahrain setup and my last race's Sepang setup. Both feel very nice and result each in a 1:43:3xx atm.

Unfortunately there's a business appointment on race evening again. It starts in the early evening so there's a little chance I can make it.

anyone up for a stint or two tonight? around 9pm uk, cya on the servers if you are

gutted to hear that reik, i hope that the meeting goes smoothly and you manage to get home on time, we waited an extra 5 mins last time in case you'd make it, no doubts we will do the same again, its just not the same without you there

Premium
That's very nice guys! Unfortunately I'm not able to give any sign via Smartphone if the Event goes longer. But you can be sure I didn't make it if I'm not there for prasctice starts.

If it's becoming a close call when coming home, I'll drop a message in this thread.

I'll be on Dave, around 9, catch you later

I'll be on to wooo not 12 hours, so no work till 11 only time since xmas happy days

I'll be online tonight but don't know how long for

The good laptime for me in this one is in being proactive instead of reactive. In many places you need to start braking before you actually see the turn. Loads of time can be found in carrying a bit of rolling speed into the next straight, but ginormous amounts of time can be lost if you overshoot.

... sry guys.
but i have to skip this race. i am out of town from tomorrow until the end of next week.

i hate it when my work interferes with my hobbys. i hope this is the only time this season.

i whish you all the best for the race tomorrow.

Well I did say it was possible